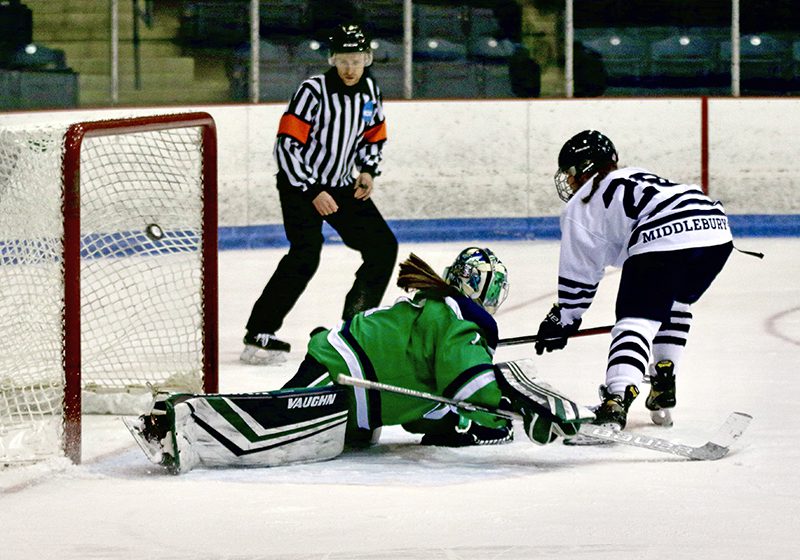 Elsewhere, the ski team took third in an abbreviated UVM carnival; the men’s basketball team came up short in a key NESCAC showdown; the women’s hoop squad won once in three outings, but remained high in the league standings; and the men’s hockey team earned a tie in three games.

Panther women’s hockey improved to 18-0, 12-0 in NESCAC play, with two weekend shutout wins at league foe Trinity (6-10-1, 2-8). They remain the top-ranked and only undefeated team in NCAA Division III. They were set to play a home-and-home series with Williams this weekend, but those games were postponed.

On Friday the Panthers blanked the Bantams as goalie Caroline Silk made a career-high 23 saves. The Panthers fired a season-high 50 shots on Bantam goalie Hannah LeClair, who stopped 47 of them.

The Panthers took the lead on a Claudia Vira shot from the point through traffic at 13:01 of the first, made it 2-0 late in the second on a Jenna Letterie one-timer set up by Eva Hendrikson, and got a pad goal with 3:01 remaining in the third from Madie Leidt, a shot from the left wing, her NESCAC-leading 13th of the season.

On Saturday the Panthers defeated Trinity, 5-0, as goalie Sophia Merageas made 21 saves. LeClair made another 44 stops for the Bantams.

Middlebury got two goals from Vira and one apiece from Alexis Ryan, Letterie and Kate Dudley. Sabrina Kim picked up three assists, while Raia Schluter added a pair of helpers.

The Middlebury ski team scored 336 points, all from the Nordic skiers, in placing third at the Vermont Carnival this past weekend. Alpine events were canceled due to weather conditions. UVM won with 518 points, while Dartmouth was second with 436.

On Saturday Panther Peter Wolter placed second in the men’s 10K classic in at 28:10.2, just two seconds behind the winner. Cornwall’s Sam Hodges was next for Middlebury, placing ninth in 29:04. For the women Kate Oldham paced Middlebury with a ninth-place finish (33:23.6).

In Friday’s freestyle sprint Oldham led the Panther women in 10th in 4:20. Hodges was the top finisher for the men in 15th in 3:41. Middlebury Union High School grad Jack Christner was the third Panther finisher, taking 34th (3:46).

The Panther women’s basketball team stands at 11-9, 5-3 NESCAC, in fourth place in NESCAC heading into its final regular season games, at home vs. No. 12 Tufts at 7 p.m. on Friday and Bates at 3 p.m. Saturday.

On Feb. 2 host Trinity rallied past the Panther women in the fourth quarter to prevail, 62-59. The Panthers scored the first six points of the final period to lead by 54-43 with 7:49 remaining.

Trinity later went on a 10-2 run to tie the game at 59-59 on a three from Tori Varsamis with 2:19 left. At 1:11 Bantam Liz Althoff converted an offensive rebound for a 61-59 edge. The Panthers turned the ball over, and Althoff hit a free throw for the final margin.

Reilly Campbell produced 25 points and 10 boards to lead the Bantams.

On Sunday the Panthers outlasted host Wesleyan, 59-51. The Cardinals dropped to 10-11, 3-5. The Panthers had a strong first half and led, 33-21, at the intermission. Wesleyan closed to within 53-48 with 2:15 remaining in the fourth quarter, but the Panthers went five of six from the line down the stretch to seal the win.

The Mammoths broke the game open with an 11-0 second-quarter run to lead at the half, 43-26, and were not seriously challenged afterward.

The Panthers play at last-place Bates on Saturday and fourth-place Tufts on Sunday as regular-season play concludes.

Andrej Hromic gave Middlebury the lead with a first-period power-play goal assisted by Jin Lee. Bantam Devan Tongue equalized at 8:34 of the second period, but Paddy Bogart answered for Middlebury, from Emack Bentley, to make it 2-1 entering the third. Trinity’s Riley Prattson closed the scoring at 4:07 of the third with a shot from the point.

Jake Horoho made 29 saves for Middlebury, while J.P. Mella made 25 for Trinity.

On Saturday Middlebury outshot visiting Wesleyan, 32-17, but came up on the short end on an afternoon on which the program honored seniors Alex Lee, Tyler Capello and Zach Shapiro. Wesleyan won, 5-2.

Second-period goals by Bentley and Bogart made it 3-2, but the Cardinals sealed the win with two empty-net goals in the final 1:59. Horoho made 12 saves for the Panthers, while Marc Smith had 30 stops for the Cardinals.

Bogart’s unassisted goal gave Middlebury the lead 1:48 into the game. Bentley tucked home the rebound of a Bret Pastor shot 1:18 into the second period to make it 2-0.

Nineteen seconds later Mule Brian Sanzone stole the puck from a Middlebury defender and scored. At 2:20 of the period Austen Halpin’s slap shot from just inside the blue line made it through traffic and made it 2-2.

Colby took the lead at 7:22 of the final period, when John McElaney wristed a bid in from the doorstep. Horoho made 22 saves, while Andy Beran had 29 for Colby.