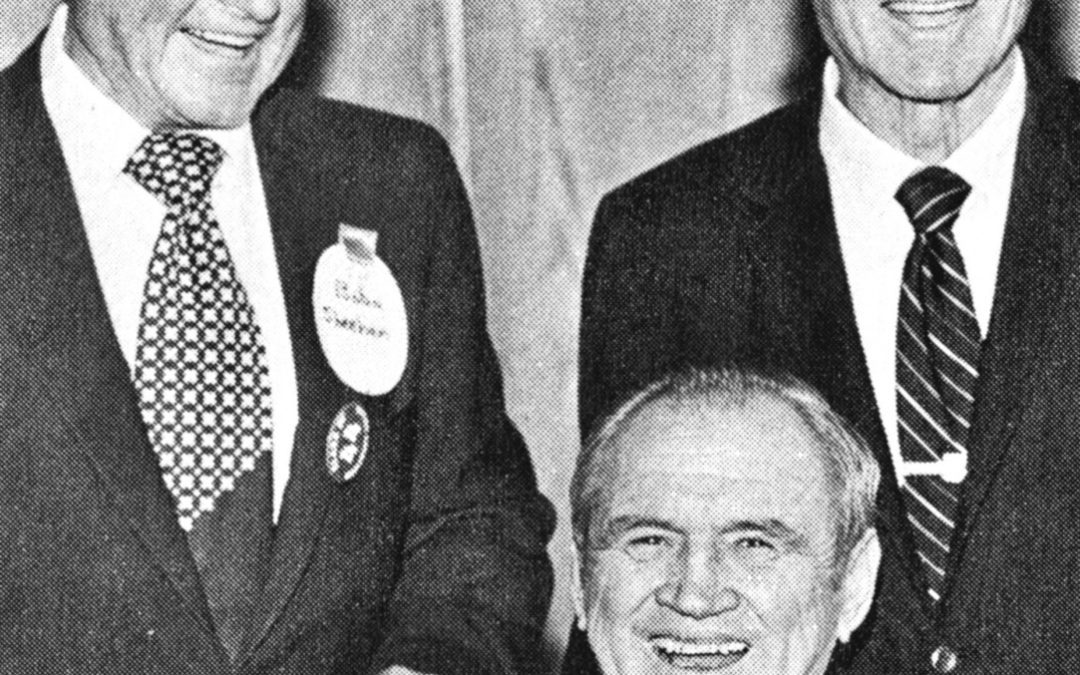 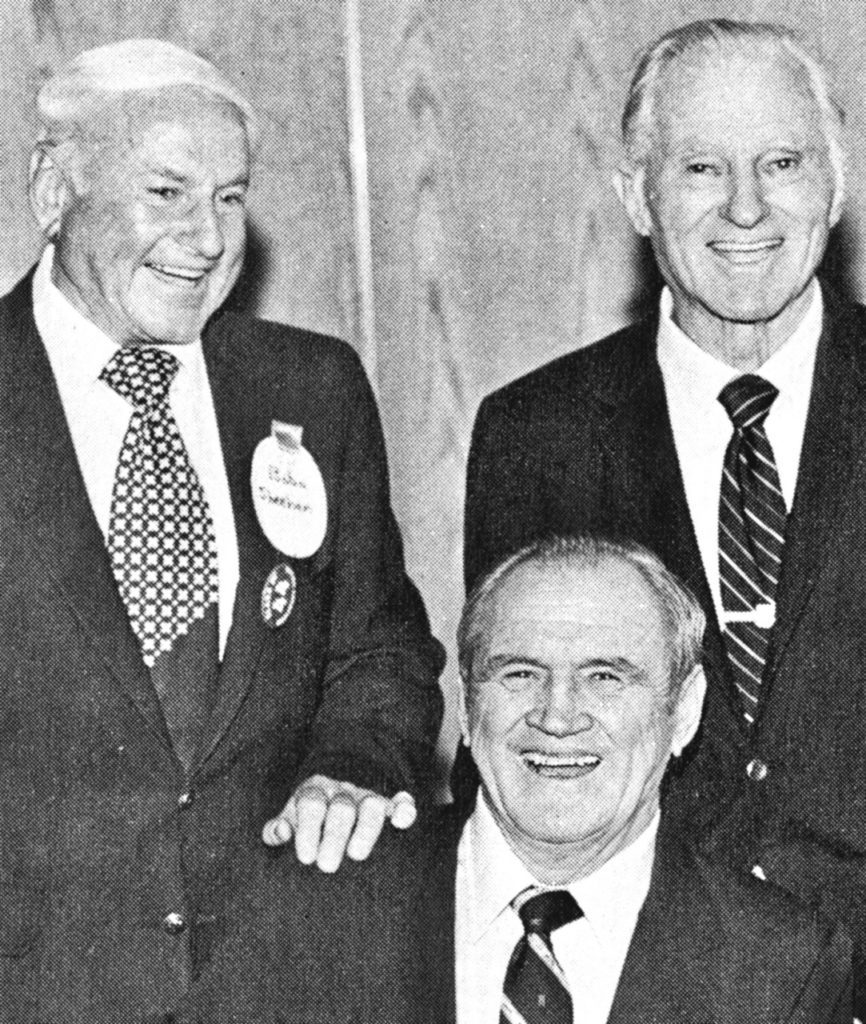 IN 1984, THE Middlebury College gymnasium was a renovated with a major gift from Art Pepin, class of 1947. Here Pepin is seated between legendary Middlebury coaches Bobo Sheehan, left, and Duke Nelson. Pepin and Sheehan were schoolmates from Newport (Vt.) High School.

I have often told people that I get through Vermont winters by not going outside. As a kid in Maine, I fell in love with basketball early on and the warm gym was my cold weather sanctuary — and in many ways still is.

I played on the basketball team at Middlebury College, lo these many years ago, which meant I was in the gym nearly every day from Oct. 15, the first day of official practice in the fall, to the second week of February after the last game — and on those days when I wasn’t obliged to be there, I was likely still there, playing on my own.

Middlebury College has played basketball for over 100 years, since 1918, but only in two buildings: McCullough Hall in the center of campus, the first gym built in 1912 — and in its present site.

In 1948, to accommodate its expanding enrollment (men on the GI Bill back from the war), the college raised $700,000 and purchased from the Navy “a surplus recreation building” from Sampson, N.Y., dismantled it, transported it to Vermont, and re-erected it.

Memorial Field House was dedicated in 1949 to those Middlebury graduates lost in World War II. In the lobby between what was then the hockey rink and the gymnasium is a beautiful recessed floor-to-ceiling marble monument with the names of all those lost. (Next time you go to a basketball game, or any other event in the complex, go take a look, when pandemic restrictions abate).

That was my gym, Memorial Gym.

In 1984, Memorial Gym was comprehensively renovated: an alum named Art Pepin, Middlebury ’47, made a major gift underwriting the renovation and his name was affixed to the court. I have often wondered “Who was this Art Pepin? Why is his name on my gym?”

I have studied Middlebury hoop history and have never seen a single reference to Art Pepin. I think it’s quite possible he never saw a game in the gym that bears his name. 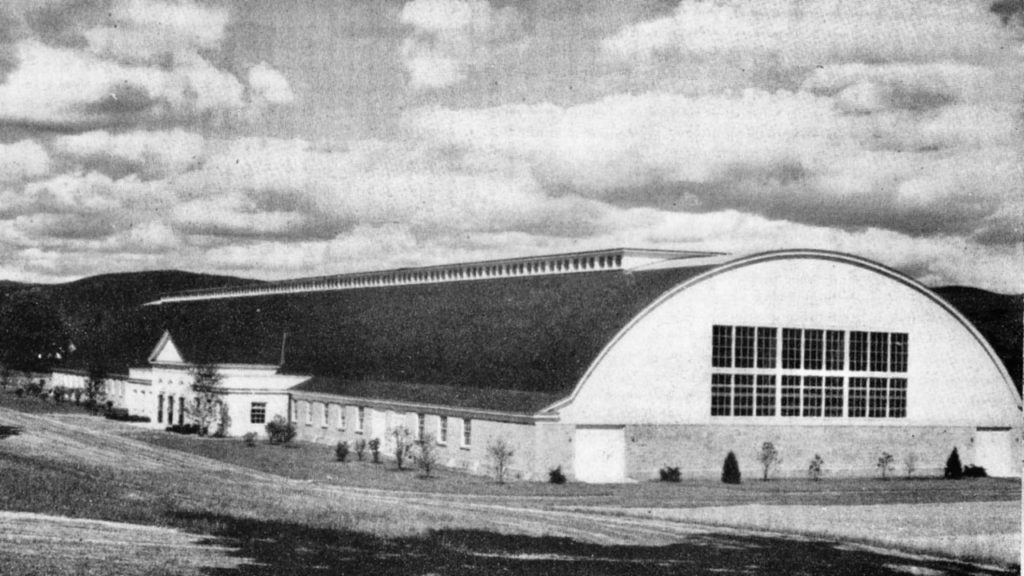 DEDICATED IN 1949, Memorial Field House at Middlebury College was originally a “big Navy surplus recreation building” in Sampson, N.Y. It was dismantled, transported, and rebuilt. The near end housed the basketball court — which exists today, twice renovated on the same spot.

After doing a little digging in the Middlebury archives and talking to some folks who knew Art Pepin (Mike Schoenfeld ‘73, recently retired VP for Development, and Pete Brakeley ’75, a close friend and football teammate of Art’s son, Tom ’75), I am learning about Art Pepin — and am coming around.

While Art may not have been a basketball player or fan, his appreciation for his alma mater was genuine and enduring, as was his passion for sports and his belief in their value. 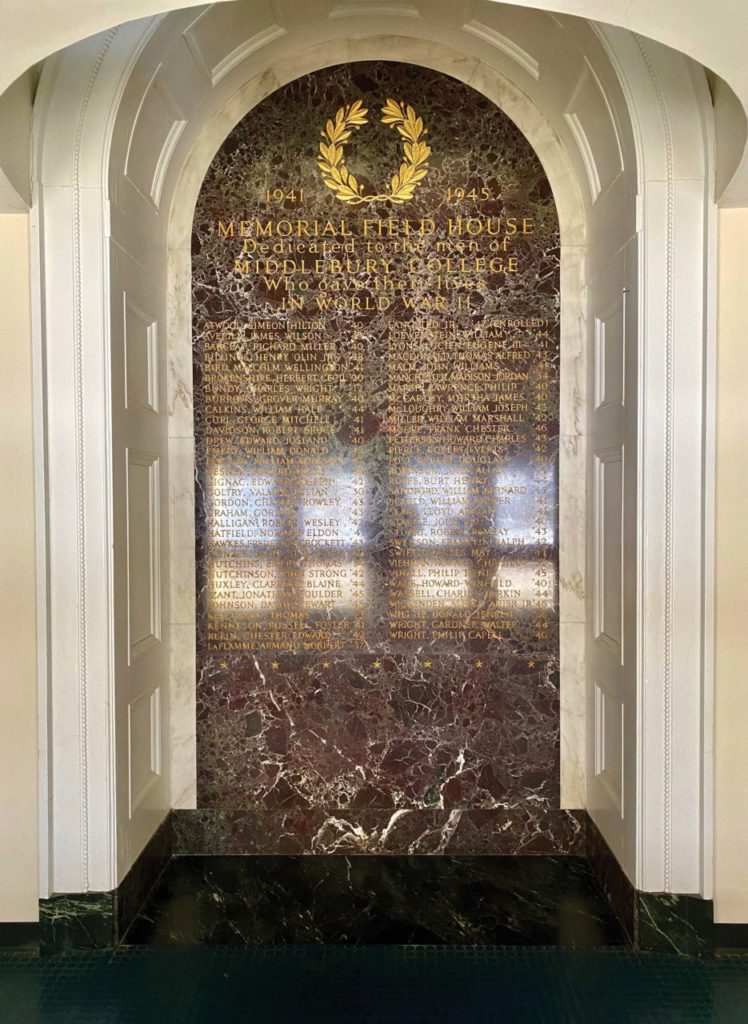 IN THE MEMORIAL Field House lobby between what is now Nelson Arena and Pepin Gymnasium is a beautiful floor to ceiling marble monument with all the names of Middlebury students killed in World War II. It is worth a visit the next time you are in the Middlebury Athletics Complex.
Independent photo/Karl Lindholm

Art Pepin was indeed a rich fellow who liked to give away his money — his name is attached to many other worthy projects. He made his money selling beer, Budweiser beer, lots of it, in time becoming one of Anheuser-Busch’s largest distributors and a personal friend of August “Gussie” Busch himself.

Art Pepin had a big personality, was affable in the extreme: a raconteur; a crooner — he loved to sing and recite whole poems from memory (Frost’s “Birches,” for example). He said he was in the “business of making friends.”

After owning distributorships in Manchester, N.H., and then Gainesville, Fla., in 1967 he acquired the Anheuser-Busch distributorship in Tampa, where he became one of that city’s most prominent citizens, and good friends with that other Tampa colossus, George Steinbrenner.

Art Pepin was a Vermonter!

He was born in Newport, Vt., four miles from the Canadian border, the seventh of eight Pepin children. His dad was a Quebecois, a railroad man, and his mom, from Holland, Vt., took in laundry and cleaned houses to help make ends meet.

The Pepin children all had to work. Newport had a nice nine-hole golf course where Art caddied from age 10. He was the favorite caddy of one Mrs. Leoni Hayes, a summer resident from New Jersey. Mrs. Hayes became his benefactor, encouraging him to go to college and then paying for it. They remained friends Art’s whole life. At the same time he funded the renovation of the gym, he established a scholarship at Middlebury in her honor.

Art came to Middlebury with one of his best high school friends from Newport, Bobo Sheehan, who became the legendary ski coach at the college. Art was a terrific athlete, first at Newport High, then at Middlebury College. A big kid at 6-foot-2, 200 pounds, Art lettered in football, hockey, and track and field at Middlebury, and was captain of the football and hockey teams. 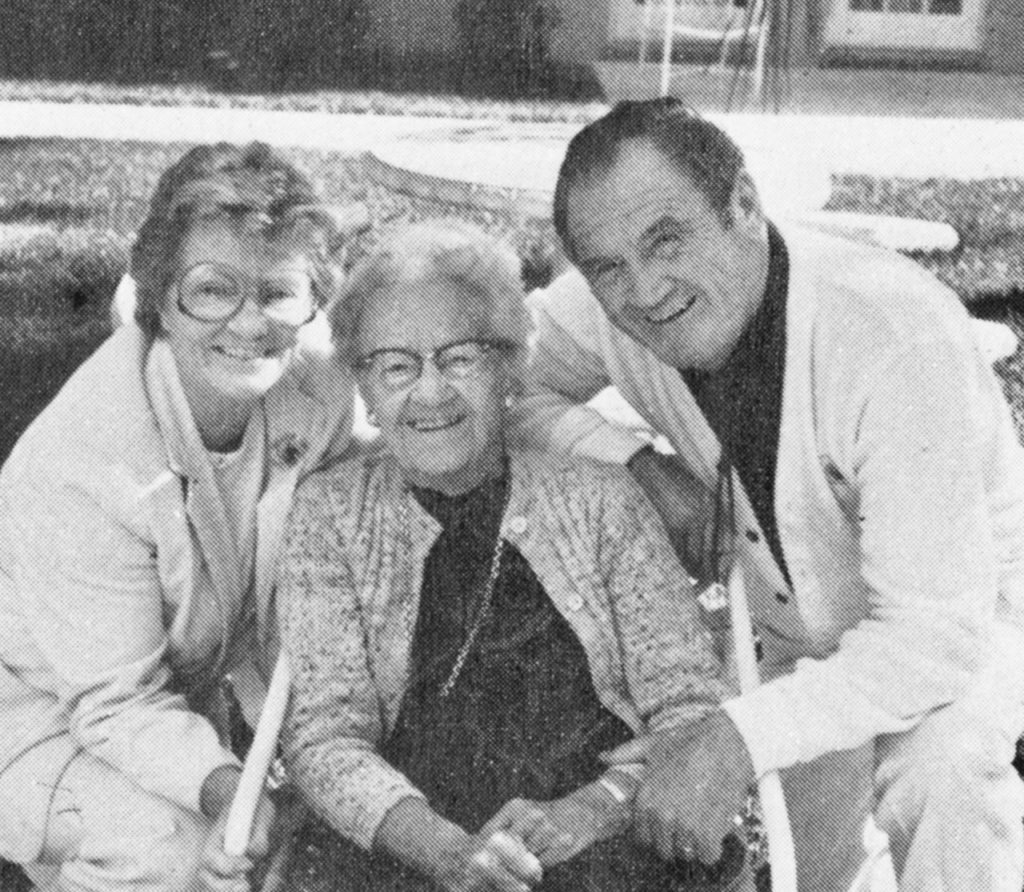 SEATED BETWEEN ART and Polly Pepin is Mrs. Leoni Hayes, who made it possible for Art to attend Middlebury College by providing the funds. As a boy, Art was her caddy at the nine-hole Newport (Vt.) Country Club.

Art left Middlebury in 1943, after his junior year, and joined the Marines, serving in the South Pacific in World War II, stationed in Guam. He returned to school in ’46, engaging again in sports, and earning a degree in Political Science in the spring of ’47. He was unquestionably a big man on campus, a member of the Blue Key Honor Society, Winter Carnival King, and winner of the Stabile Cup at graduation (“to the athlete who best exemplifies the Middlebury spirit”).

After graduation, Art dabbled in a number of professional pursuits. He was playing semi-pro football for the Glens Falls Commodores and tending bar when he met Polly Pooler of Westport, just across Lake Champlain from Middlebury. They married in August 1949 and were partners for life. 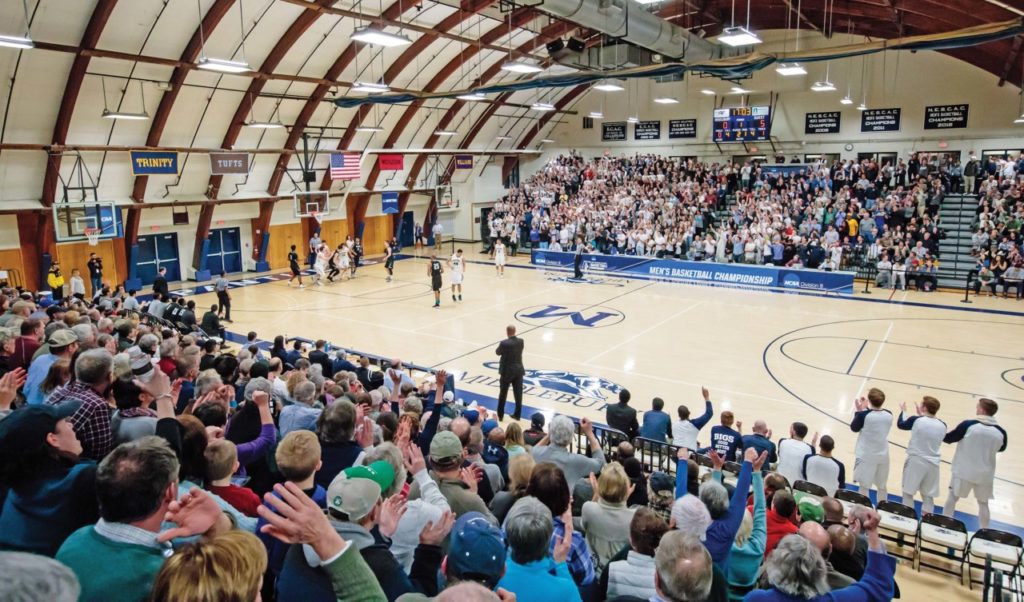 A FULL HOUSE at a 2017 NCAA Tournament game between Middlebury and Endicott College at Pepin Gymnasium. A major gift from Art Pepin ’47 provided the resources to renovate Memorial Gym in 1984.

In January 1986, Art received a transplanted heart that allowed him to live another 14 years. He died just short of his 79th birthday in 2000.

That’s the story, in brief, of Art Pepin. It’s a good story. I don’t think I will bristle anymore when I hear Memorial Gym referred to as “Pepin Gymnasium.”

In fact, you may even hear me say “Meet me at Pepin!”