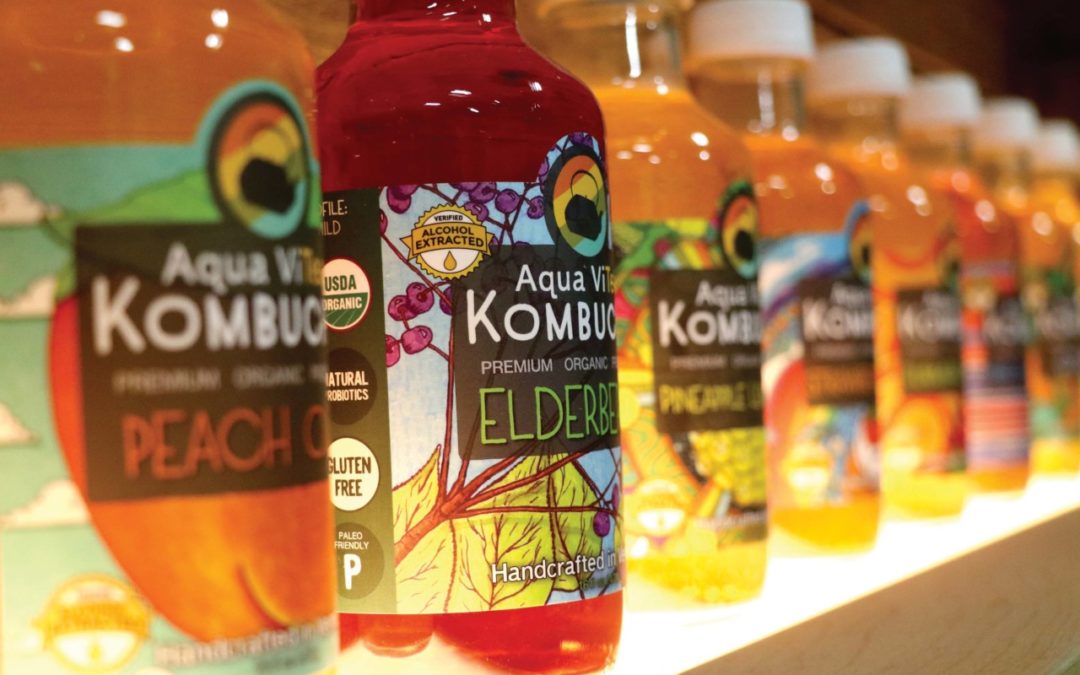 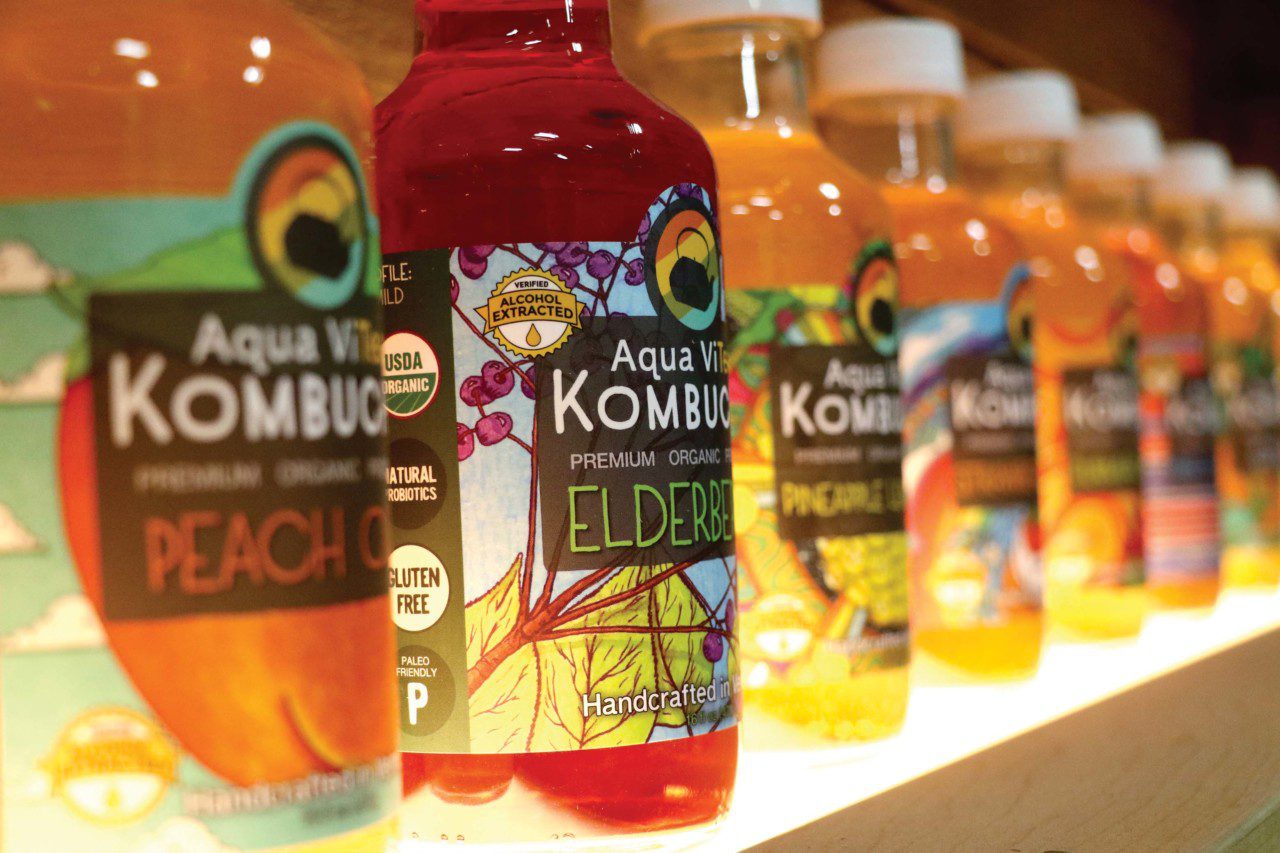 AQUA VITEA, WHICH makes kombucha in Middlebury, hopes to use a $1.5 million grant to ramp up production of its popular drinks and become a major incubator for small startup beverage companies.
By John Flowers

MIDDLEBURY — Beverage maker Aqua ViTea is looking to substantially increase its canning capabilities, allowing it to hit a new gear in its kombucha production while also giving it the capacity to become a major incubator for small startup beverage companies.

Woodchuck Cider, a Middlebury industrial park neighbor, is shaping up as the other major player in this beverage-incubator venture, noted Aqua ViTea Founder/CEO Jeff Weaber. In short, Aqua ViTea is poised to acquire a 100-cans-per minute processing line from Woodchuck, which is itself graduating to 600-cans-per-minute infrastructure at its Exchange Street plant.

A key component of the companies’ canning conception is a $1.5 million Capital Investment Program grant, which Aqua ViTea is seeking through the Vermont Agency of Commerce and Community Development.

“The grant is critical,” Weaber said. “For us to continue investing in the infrastructure of this building when we don’t own it becomes really challenging. So this grant helps alleviate that issue.”

Aqua ViTea has come a long way since Weaber brewed his first batch of kombucha in 2003. He and his wife Katina settled in Salisbury in 2005, where Jeff ramped up production and opened a booth at the Middlebury Farmers Market in 2007. Distribution in bottles ensued in 2008, followed by Aqua ViTea’s relocation to Bristol’s industrial park. In 2015, continued growth in sales and production led to the company’s move to Middlebury.

At this point, Aqua ViTea employs 31 people who are producing around 750,000 case-equivalents of kombucha each year. The company grew by 30% last year and demand for its kombucha continues to grow, Weaber said.

Aqua ViTea moved to canning in early 2019, beginning with its alcoholic kombucha. In short order, the company started canning its non-alcoholic kombucha, as well. It sold 394,260 cans of kombucha in 2020, with sales approaching 1.25 million cans in 2021.

“It was very well received,” Weaber said of the new receptacles. “So a big part of our growth plan right now is moving to cans as we expand West.”

Aqua ViTea will also keep cranking out 16-ounce bottles of kombucha, though 12-ounce cans appear to be the future. 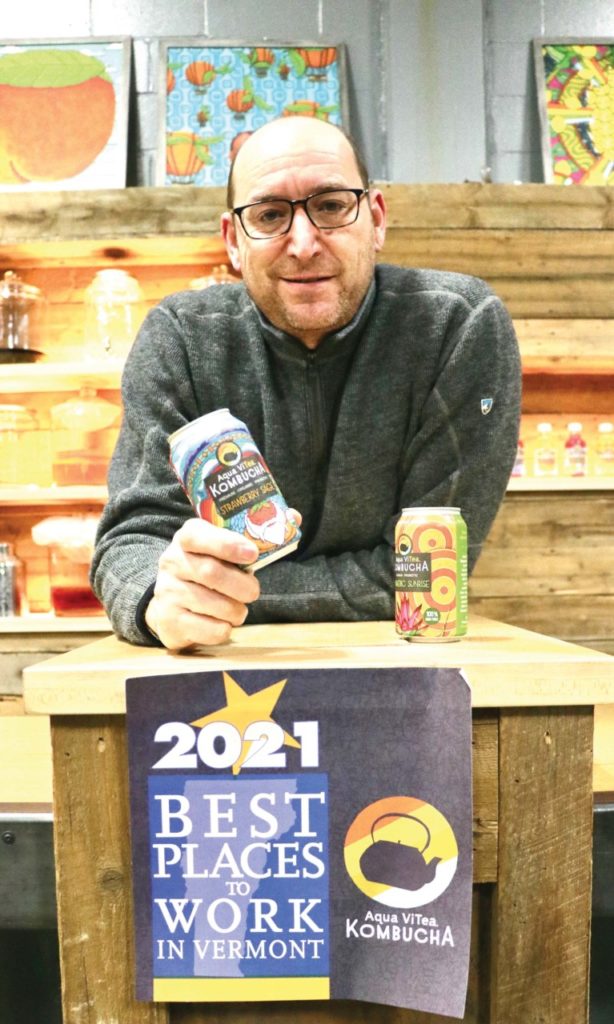 JEFF WEABER HOLDS cans of his company’s Aqua ViTea kombucha, which is made in Middlebury. Aqua ViTea hopes to use a $1.5 million grant to ramp up production of its popular drinks and become a major incubator for small startup beverage companies.
Independent photo/Steve James

Weaber proudly notes Aqua ViTea was among the first companies to put kombucha in a can.  He signed a deal with a New Hampshire company to secure a mobile canning line, a common practice among new craft breweries.

“They show up at your facility with a truck and unload this little, four-head filler and they connect to your tank and do the packaging for you,” Weaber said of the service.

“It’s more expensive than doing it yourself, but you’re not having to maintain the equipment,” he said.

Eventually, Aqua ViTea contracted for a small canning line at its Pond Lane facility. The company’s New Hampshire partner still provides workers to do the packaging.

“It’s nice for us to have that flexibility, but it erodes the margin quite a bit,” Weaber said.

He reasoned Aqua ViTea is now ready to take on its own packaging. So the company signed an option to buy Woodchuck’s 100-cans-per-minute line. It will take several million dollars to acquire and install that infrastructure. But the payoff, Weaber noted, would be more jobs and extending a helping hand to entrepreneurs who could further solidify Middlebury’s reputation as a beverage hub.

Officials at Aqua ViTea expect sales of around 40 million cans of kombucha over the next five years if its partnership with Woodchuck goes through. Landing the $1.5 million CIP grant is expected to result in Aqua ViTea adding more than 25 new employees within five years, according to company projections.

Aqua ViTea is currently helping around a half-dozen young beverage companies with packaging. Local clients include WhistlePig, which recently launched a ready-to-drink cocktail in a can.

“We’re talking to new people every day,” Weaber said. “The majority of them are new-ish companies, or startups. So their volumes are increasing; some of them might not make it. A lot of them are coming from Vermont, and some are local to Addison County.”

Absent the $1.5 million CIP grant, Aqua ViTea would have to “fully reassess (the project),” Weaber said. “We still have the small canning line, and have that to fall back on.”

The company has an option with its New Hampshire mobile canning contractor to add another in-house packaging line, but that wouldn’t be ideal, according to Weaber.

“But for this grant, we wouldn’t be able to do this, and Vermont would be losing that ‘middle ground,’” Weaber added. “There aren’t a lot of people who have that size line already; the 100 is considered a rather large line, and (Woodchuck) is moving to 600. It creates this huge gap between the mobile canning guy at 30 cans per minute, to someone at 600 cans per minute.”

So Weaber is crossing his fingers that Aqua ViTea’s application makes the cut in what is a very competitive Capital Investment Program. The state received 124 applications seeking a total of $91 million, and there’s only $10.5 million to award, noted Fred Kenney, executive director of the Addison County Economic Development Corp. (ACEDC).

“This is a very exciting project for Addison County and Vermont,” Kenney said of Aqua ViTea’s proposal. “It has the potential to increase beverage start-ups and support scaled growth of the beverage industry, a primary economic driver and job creation sector for Addison County.”

He noted ACEDC was very supportive of the launch of the CIP grants, made possible by a portion of federal American Recue Plan Act resources received by Vermont. The ACEDC is supporting seven Addison County applications for CIP money, including a Danforth Pewter proposal.

“The ACEDC will push for additional funding for the program this year,” Kenney promised.