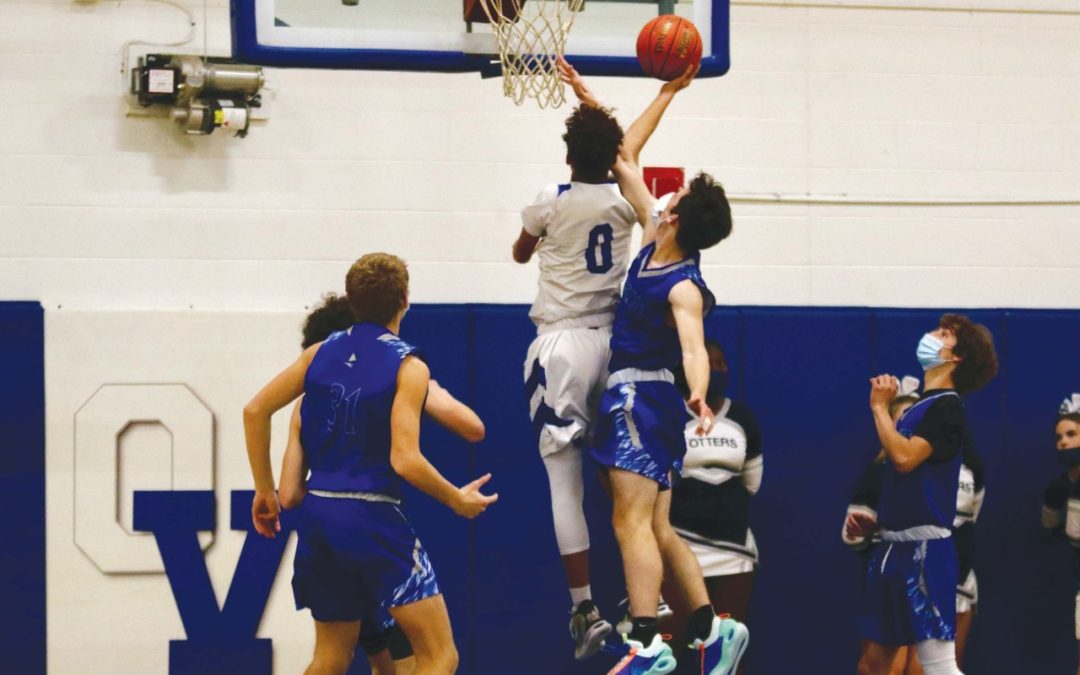 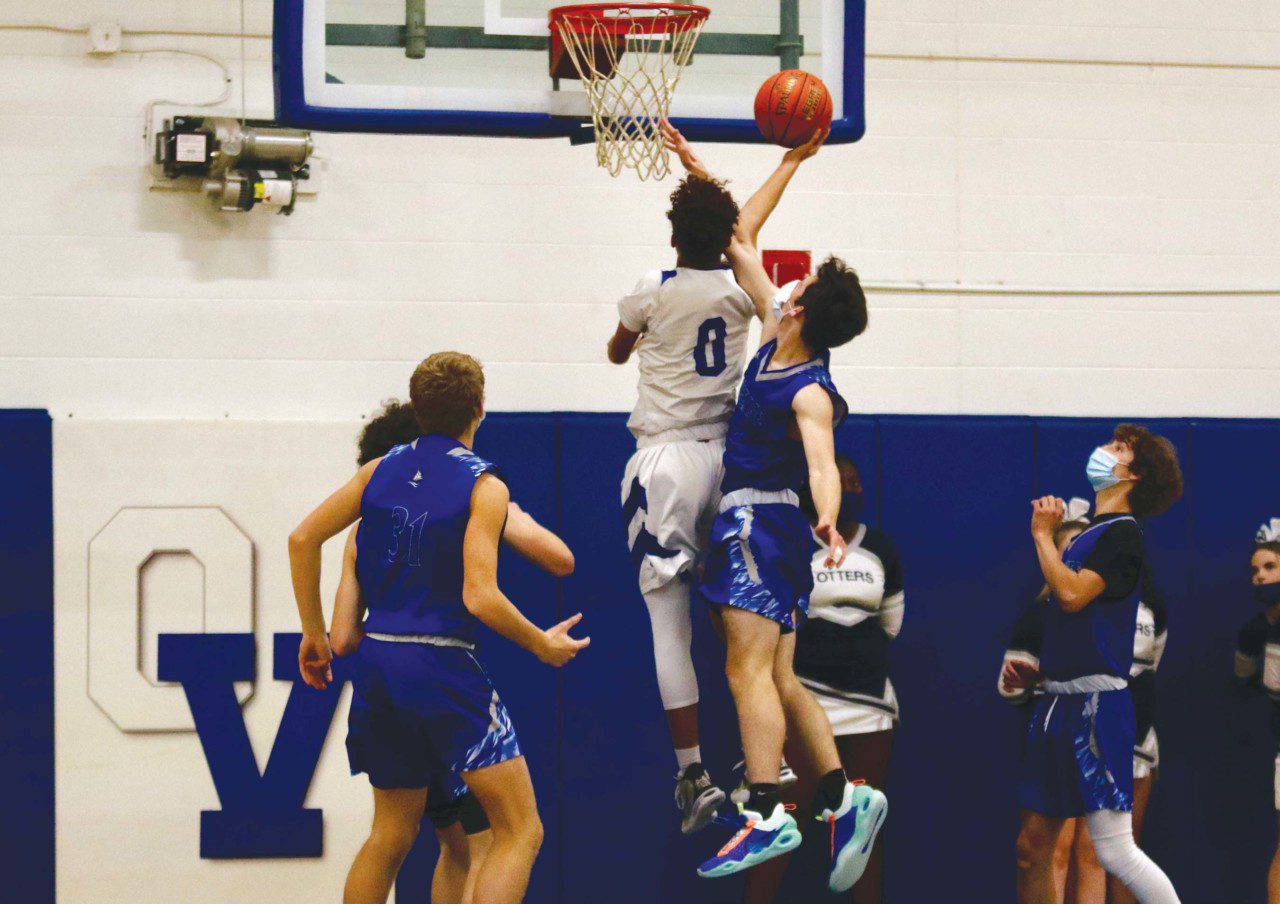 BRANDON — Host Otter Valley hung with the Vergennes Union High School boys’ basketball team for two-and-a-half periods on Tuesday, but the Commodores went on a decisive 15-0 second-half surge on the way to a 56-36 victory.

The Otters rallied from an 18-4 deficit early in the second quarter to pull within 22-21 at 3:40 of the third on a Hayden Bernhardt three.

OV worked hard in its 2-3 zone to keep the Commodores away from the basket, and the Otters forced seven second-quarter turnovers to stay close. Then OV junior Matt Greeno erupted for eight points in the final 2:05 of the first half.

Greeno hit two free throws at 2:05 of the second quarter and then nailed back-to-back threes. Suddenly what had looked like a Commodore runaway was a four-point game at the break, 18-14.

The teams traded baskets until Bernhardt hit his three to make it a one-point game, and then the Commodores took charge.

Sophomore Tyler Bergmans, a force on the boards and a key ball handler for VUHS all game, started the surge with a strong move in the lane.

Elijah Duprey, who contributed tough defense and 10 points off the bench, followed by swishing a short jumper in the paint, and then Oakley Francis banked in an unconscious over-the-shoulder shot in transition after forcing a turnover. After Bergmans swished a three OV called for time. 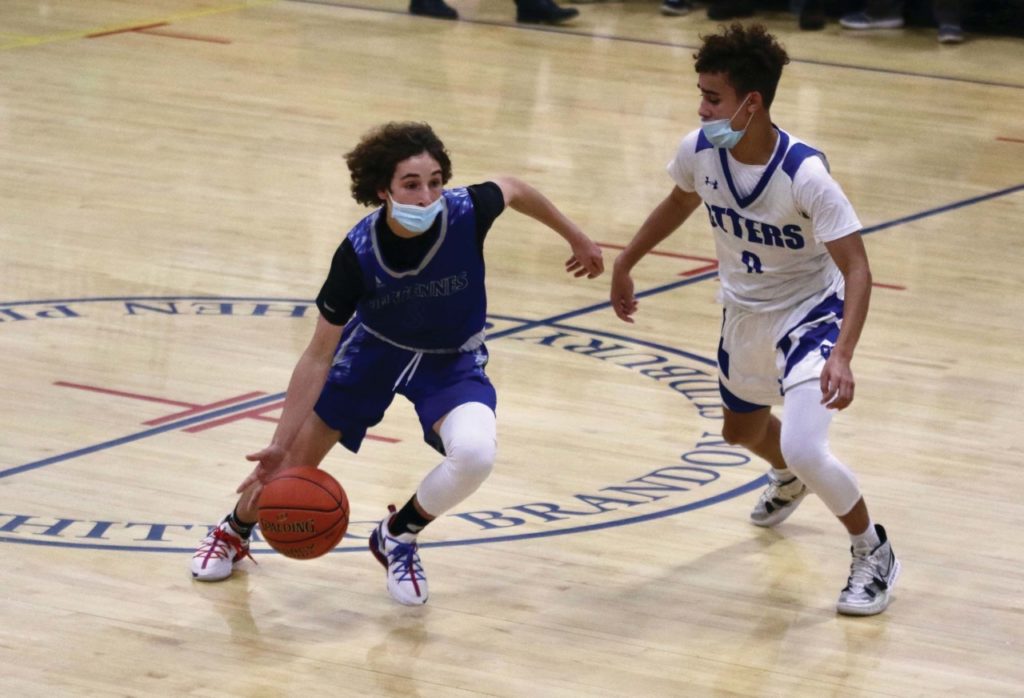 VUHS GUARD ELIJAH Duprey dribbles at midcourt against the pressure of OV guard Elijah Tucker-Bryant in Brandon on Tuesday. The visiting Commodores won the boys’ basketball game with a big second half.
Independent photo/Steve James

It didn’t slow VUHS, as Bergmans set up a Tim Ashley three to close the third period, and Ashley nailed another three to open the fourth and complete the 15-0 run that made it 37-21.

OV made one more run, closing to 44-36 at 3:50 as Elijah Tucker-Bryant scored six points, Owen Thomas tossed in five, and Evan Thomas added four in a 15-7 counter-surge.

But the Commodores outscored OV by 12-0 the rest of the way. Duprey contributed six of those points with a transition hoop and four free throws, Bergmans scored on an inbounds play, Ashley sank the last of his six three-pointers, and Abram Francis hit a free throw.

OV Coach Mike Stark was happy with his team’s defensive effort in the 2-3 zone, but said the combination of the Otters’ first-half offensive woes and the Commodores’ second-half outburst was too much to overcome.

“It was a slow start for us. In the second quarter we went on a little run to make it a four-point game going into the half,” Stark said. “But they had an answer for us and went on their run, and we just couldn’t get a stop.”

The 1-5 Otters have been competitive in most of their games but, as they did on Tuesday, they tend to make mistakes at inopportune times, Stark said.

“When we got within striking distance, when we were right there, we just had some bad possessions.”

Stark attributes that in part to growing pains on a young team. Although Tucker-Bryant, Bernhardt and Evan Thomas are seniors, OV also is relying on many younger players, such as sophomores Aiden Decker and Owen Thomas and freshmen Drew Pelkey and Logan Letournean. Pelkey played the entire game on Tuesday, and Letourneau was unavailable.

Ashley tossed in a game-high 20 points for VUHS. Bergmans’s 14 points included a 30-foot three-pointer that beat the first-quarter buzzer, and his scoring was complemented by a strong effort on the boards that helped VUHS earn a 35-28 advantage in that department. Hayden Bowen chipped in six points for VUHS. 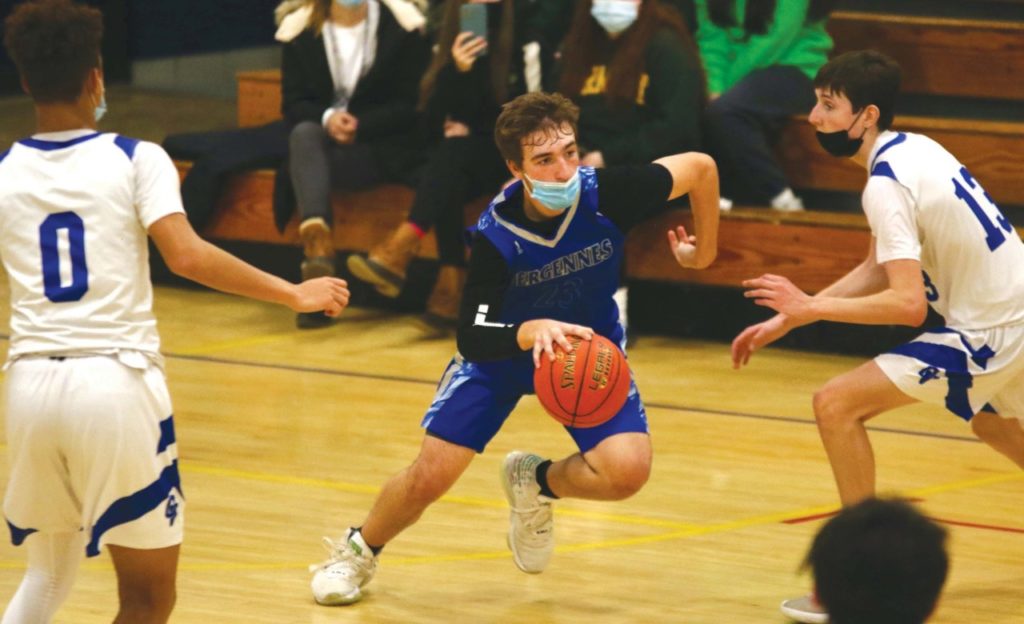 VUHS Coach Josh Carter praised OV’s defensive effort: The Commodores committed an uncharacteristic 18 turnovers. Carter said the team would focus on that issue, but added the Otters had a lot to do with the statistic.

“The guys really had to grind that one out,” he said. “Defensively, their zone was really pesky.”

Carter said the Commodores, who improved to 3-1, maintained their poise, and that proved to be decisive as they took charge in the second half.

“Our guys just stayed calm throughout that situation,” he said. “And once we got rolling things opened up a little bit for us.”

“We’ve held every team below 40 points this season, so we’re feeling pretty good,” Carter said. “Our guys are really making their mark at that end of the floor.”

He added the best thing right now is just that the Commodores are playing.

“I’m just happy the guys are getting a chance to compete right now,” Carter said. “Hopefully we can keep this thing rolling.”