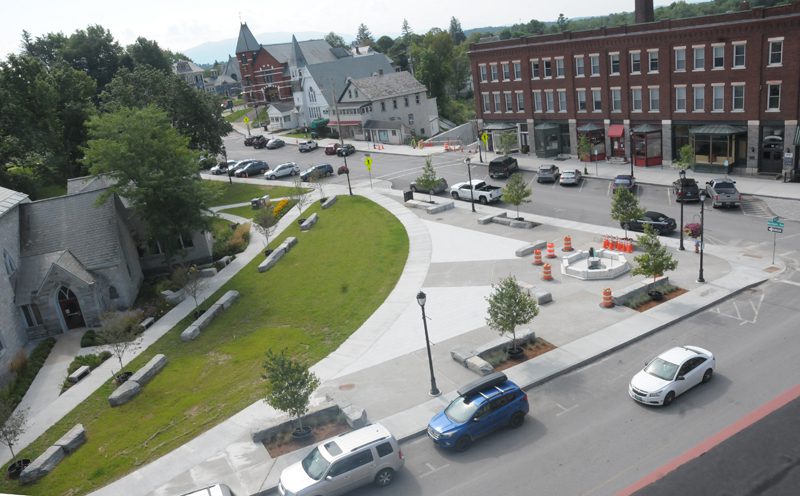 THE NEW TRIANGLE Park was expanded thanks to reclamation of land that had been lost to the rail corridor back during the 1840s. Independent photo/John S. McCright

Those who reside, shop, work and travel through downtown Middlebury celebrated the completion of a complex, $72 million rail tunnel project in 2021, a massive undertaking that spanned the better part of four years and brought much construction disruption to the heart of Addison County’s shire town.

The Vermont Agency of Transportation (VTrans) and Kubricky Construction divided the endeavor into seven distinct projects, beginning in 2017 with the demolition of the two 1920s-era bridges that stretched over the railroad on Merchants Row and Main Street. Those bridges were replaced by temporary spans.

The other projects included installation of a drainage system for the rail bed; construction of the actual tunnel, which included a 10-week closure of Main Street and Merchants Row during the summer of 2020; and what officials described as a series of capital improvements on VTrans-owned rail infrastructure necessary to support the detour of freight trains during the 10-week closure.

All of this led to the inauguration of a 360-foot concrete tunnel that travels through the downtown, while creating several side benefits that included an expanded Triangle Park above the tunnel and a new Lazarus Park off Printer’s Alley, as well as new downtown sidewalks and undergrounded utilities.

The overall state and federal commitment to the Middlebury project came in at $91.5 million, when one includes engineering and other costs related to what was one of the largest downtown transportation ventures ever coordinated by VTrans.

Area residents were not only pleased with the final product, they were relieved to return to a schedule free of blasting, dust, traffic detours, fewer parking options and the din crated by heavy construction equipment.

With the project done, Middlebury residents turned to the next significant train development — the return of passenger rail service. Plans called for a June 2022 expansion of Amtrak’s Ethan Allen Express train, which currently travels from New York City to Rutland, via Albany, N.Y., and Castleton, Vt. The route will be extended north from Rutland to Burlington’s Union Station with stops in Middlebury and Vergennes.

Proponents predicted the service would be a winner for Addison County residents seeking alternative transportation to Burlington, or to Rutland and points south. Organizers professed great hope that members of the Middlebury College community would become avid users of the train.

And when the train does come through Addison County, Middlebury and Vergennes will be prepared with rail platforms to accommodate passengers. Kubricky Construction recently completed a Middlebury rail platform off Seymour Street that includes a 300-foot deck and a 200-foot canopy, with lighting.

Meanwhile, Vergennes will be served by a remodeled train depot and new platform at the Ferrisburgh Park and Ride off Route 22A, near Route 7.