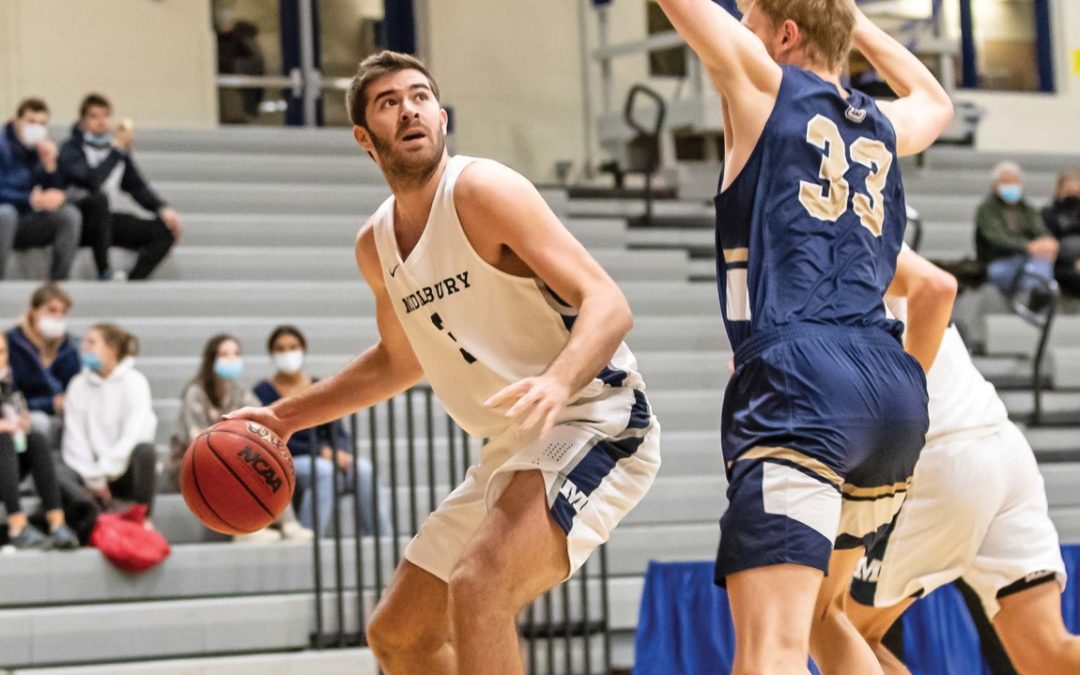 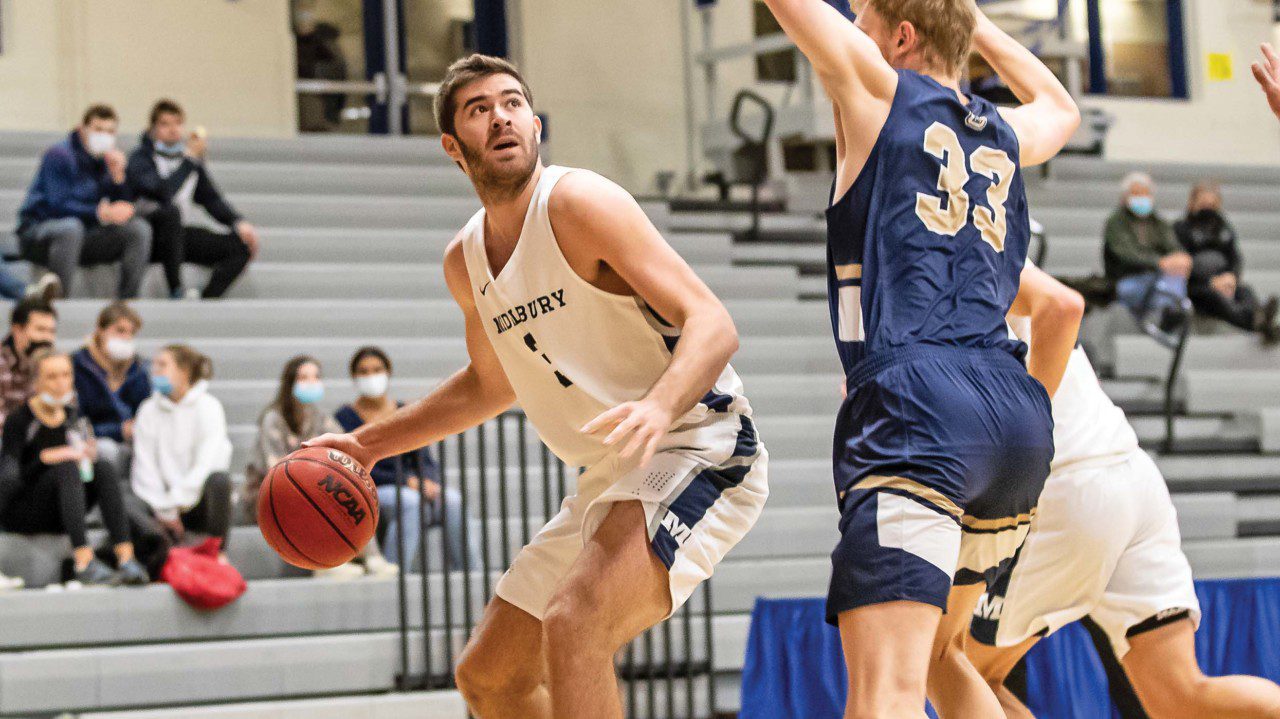 JUNIOR ALEX SOBEL leads the resurgent the Middlebury College men’s basketball team (8 wins-2 losses). He is first among all NESCAC players in rebounds (12.8 a game) and blocked shots (3.9) and is second in scoring (18.8). Middlebury College photo/Will Costello
By Karl Lindholm

When the note came across my computer that the college was shutting down early for the holiday break, the Thursday before the last day of classes and the week prior to exams, I was dismayed.

“Here we go again,” I couldn’t help but think, though the message was that this step was being taken “out of an abundance of caution.”

I clearly remember March of 2020 when the campus closed to in-person learning the first time. I was irritated, certain it was an overreaction. Shows how much I know. We were told then that students were going home early for Spring Break and the hope was that in-person school would start back up in a couple weeks.

I am now tentative in most things, cautious, a leaf in the wind, so little seems certain in our COVID-circumscribed lives.

To be honest, my most immediate response this time was disappointment that the Middlebury men’s basketball games the next night against Skidmore and two days later against Stevens were being postponed.

I know, I know, there are larger worries with COVID and its continued presence and spread, but I take my pandemic pleasures where I can. I was so looking forward to those games, as was my coterie of Midd hoop friends who try never to miss a game.

The Middlebury men’s team so far this year is 8-2 — and has been a revelation! Little was known about the team and not much was expected.

The top six players in last year’s lost season were all seniors. Rarely if ever have there been such a collection of good players at Middlebury in a single class. The year before, they led the Panthers to a 21-6 record and qualified for the NCAA tournament (the 11th time in 13 years for Midd), winning their first game and losing the second by just a bucket.

This year’s team is brand new, to Panther fans a blank slate. None of the returning players averaged more than five minutes of playing time or two points a game. There’s not a senior on the club.

The first game was on the road at Wentworth Institute on Nov. 4, and the Panthers won, 73-56. In that game, Alex Sobel, a 6’8” center scored 30 points, had 17 rebounds and four blocked shots, an absolutely dominant performance.

That was good news indeed. Alex played only nine games his frosh year in 2020, not returning to school after the holiday break. He is back with a vengeance: after 10 games, he is leading the league (NESCAC) in rebounds with 12.8 a game and blocked shots (3.9, fourth in the country), and is second in scoring with 18.8 a game.

The second game of the season was a home game against Keene State, our first chance to see this club. The Panthers lost, 86-77 to a solid team (8-2 at this point). It was not a discouraging loss despite the fact that our most experienced backcourt player, Nash Goldman, was injured only eight minutes into the game (a broken wrist, out for the season).

The Middlebury team was resilient in this early game and played hard. Fans went away knowing that the season was not going to be a disaster, reinforcements had arrived! Sobel had 21 points and 15 boards against Keene. Noah Osher is a good outside shooter, a need on the team, and scored 16 points (he’s averaging 14 for the season). First-year Sam Stevens followed his 22-point effort against Wentworth with 17 more against Keene.

Stevens is a very talented, versatile player, a 6’5” guard, who can shoot the three, go to the basket, and handle the ball. He is fifth in NESCAC in scoring with over 18 points a game. He is one of three frosh in the starting five for Middlebury. Joining him are Jaden Bobbett, a 6’2” guard, and 6’6” forward David Brennan.

Brennan is a relentless inside player, playing nearly 30 minutes a game, never taking a bad shot, and averaging a double-double, 10 points and 10 rebounds a game. Bobbett is fearless and has taken over the crucial point position and is more steady in every game — trial by fire. A fourth first-year, Lamine Cisse, a 6’4” forward, is playing 10 minutes a game and showing real potential. 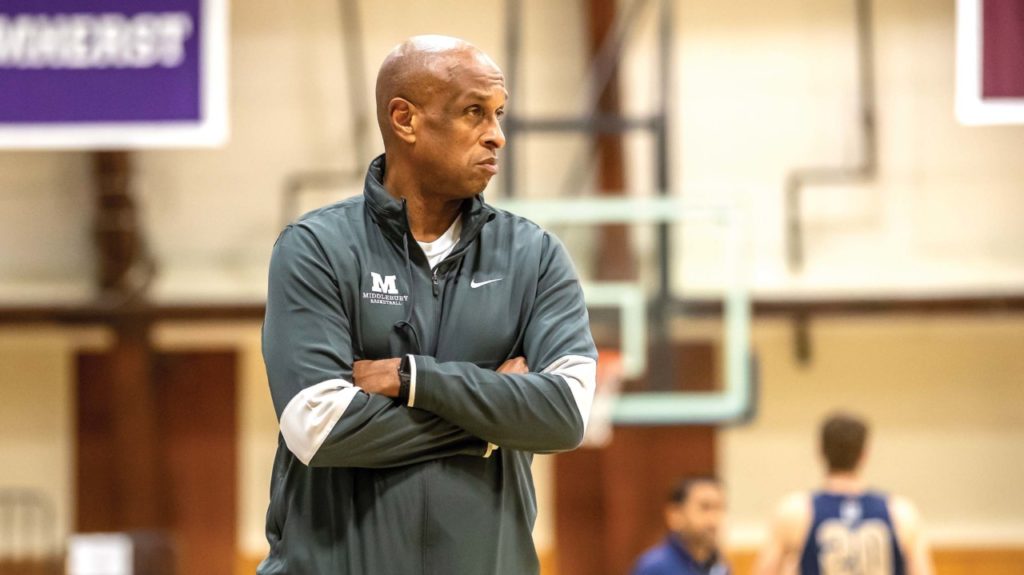 MIDDLEBURY MEN’S BASKETBALL coach Jeff Brown celebrated his 400th win at Middlebury on Nov. 29 with an 86-81 victory over Endicott. Now in his 24th year, Brown holds the record for most wins at Middlebury and also the highest winning percentage (.653).
Middlebury College photo/Will Costello

A wonderful milestone was reached in the 86-81 win against Endicott on Nov. 28: Coach Jeff Brown won his 400th game at Middlebury, the most wins of any Panther basketball coach in the 100-plus years of the game here. He also has the highest winning percentage — .653. Now in his 24th year at Middlebury, he has forged a brilliant career and is facing one of his greatest challenges with this post-pandemic unit.

So this year’s team has greatly exceeded our most optimistic expectations — to this point! We have yet to play a conference game and NESCAC is one of the top basketball leagues in the country. Amherst and Hamilton come to Pepin Gym the first weekend students are assumed to be back and school is in session (Jan. 7 and 8). Amherst is undefeated at 8-0; Williams, the other perennial power, is 9-0, and Wesleyan is 9-1 to date.

The 10 NESCAC games will be very tough, with teams deeper and more experienced than the Panthers, but whatever the result of those tests, the Middlebury team is young and the future is bright.

The Skidmore game that was postponed has been rescheduled for Tuesday, Jan. 4. The most recent missive from the college states: “The brief transition to remote learning and curtailment of activities … will help us to transition back to in-person instruction as quickly as possible.”

I am mildly reassured.

I’ll see you there, vaccinated and masked.

Karl Lindholm, the Emeritus Dean of Advising at Middlebury, can be reached at lindholm@middlebury.edu.