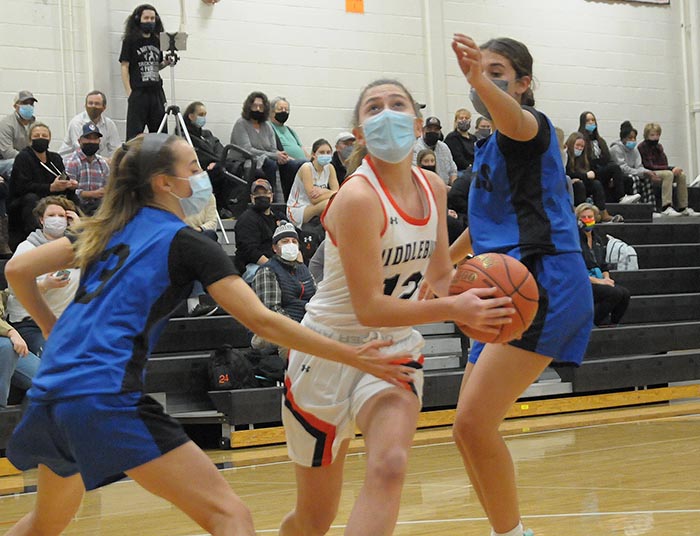 MIDDLEBURY — In a hard-fought season opening game in which the teams traded game-changing runs, the host Middlebury Union girls’ basketball team put together the decisive surge to outlast Otter Valley, 35-28.

The teams traded haymakers in the second half. The Otters closed the third quarter with a 13-3 surge to take a 20-19 lead. Seniors Alice Keith and Brittany Jackson and junior Emily Peduto combined for 12 of those points to spark OV’s rally from a 16-7 deficit.

The Tigers answered in the final quarter by clamping down on defense and scoring in transition and on the offensive glass.

Tiger senior forward Hannah Turner scored all eight of her points in the period, and junior forward Ele Sellers tossed in four of her 16 as the Tigers went on 14-4 binge that salted the game away.

Both coaches found positives in their teams’ gritty play and defense — and they and their players enjoyed the support of fans in a somewhat crowded MUHS gym after this past winter’s empty bleachers.

“Both teams were scrapping and competing. It was a great atmosphere,” said OV’s Ray Counter. “It was a good start. I’d rather have a win, but we know we have things to work on. We’ll get back at it.” 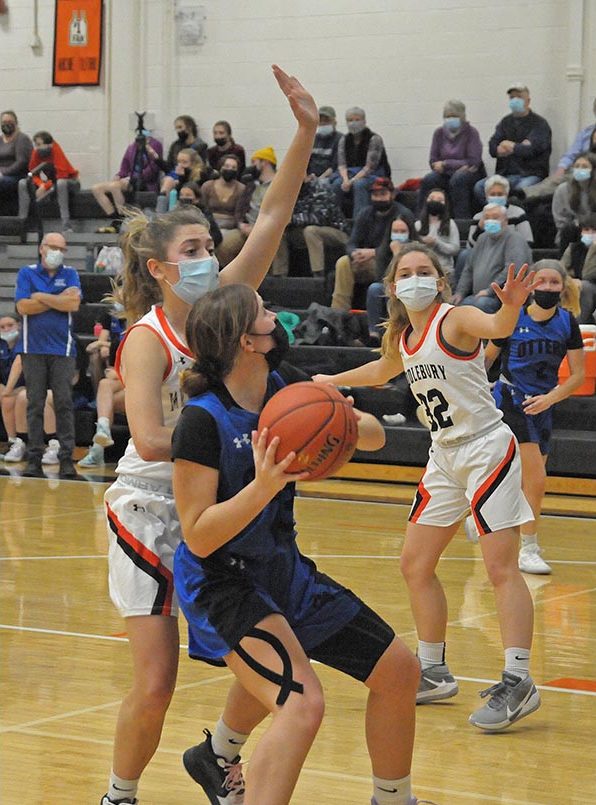 OV SENIOR ALICE Keith works to get a shot off under the basket as Tiger senior Ivy Doran defends during Friday’s opening game between their teams. The host Tigers surged in the fourth quarter to pull out the win despite Keith’s team-high 11 points. Independent photo/John S. McCright

The Tigers’ Chris Altemose enjoyed the noise and praised the athletes.

“We were back in the gym with fans. There was a crowd, and we had music, and we were pumped and energetic, and both teams played super hard,” Altemose said. “We were back and forth with each other.”

Critically, the Tigers outrebounded the Otters, 15-8, in the decisive fourth quarter, and overall by 49-37, including team rebounds. Turner and Sellers did much of that damage, with help from guards Ivy Doran and Cady Pitner and forward Alex Bonavita.

OV held its own on the boards in the two quarters in which it outscored MUHS, with Keith, Jackson and Peduto faring the best. But the taller Tigers earned rebounding margins in the second and fourth quarters.

“That was the very thing we talked about,” Counter said. “It’s our Achilles’ heel. We know it. We have moments, but it’s something we have to get better at.”

Both coaches also know their teams must take better care of the ball, although the first quarter can probably be explained by first-game jitters as well as the team’s aggressive player-to-player defenses. The teams combined for three points and an evenly split 17 turnovers that quarter.

OV kept misfiring and the Tigers kept rebounding (a 14-7 edge in the period), and when Tiger senior guard Viviana Hammond drilled a three-pointer to make it 8-5, Counter called for time at 3:20. 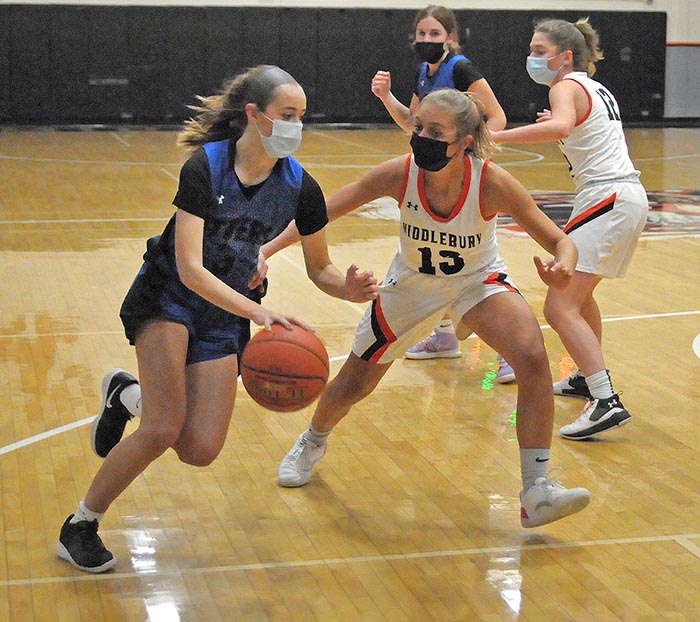 It didn’t slow the Tigers: Senior Sophie Larocue and Pitner tossed in threes, and the Tiger lead grew to 14-5. Peduto sank a late jumper to make it 14-7 at the break.

Sellers and Lee traded hoops in the first three minutes of the third period, and the Tigers seemed in control, 19-11, especially when Lee left with an injury at 4:49 just after scoring.

Instead, Keith sparked a rally. After Lee’s hoop, Ryleigh LaPorte hit a free throw, and Keith went coast-to-coast with a rebound to make it 19-14. At 2:21 Keith stole the ball in the Tiger end, was fouled while hitting a layup and completed the three-point play: 19-17.

OV completed the quarter with a Peduto jumper and LaPorte free throw. The Otters had retaken the lead, 20-19.

Then it was the Tigers’ turn. Turner grabbed an offensive board to open the fourth and fed Sellers, who was fouled and hit two free throws at 6:50. MUHS never trailed again.

Fifteen seconds later Turner hit a layup from Pitner in transition, and at 5:49 Turner stole the ball and scored in transition. The Tigers led, 25-20.

Turner said the Tigers believed in their game plan entering the period and kept their focus.

“We knew we had to stick with the game and work hard,” Turner said. “We kept our composure, and we found the opportunities to push it up the court.” 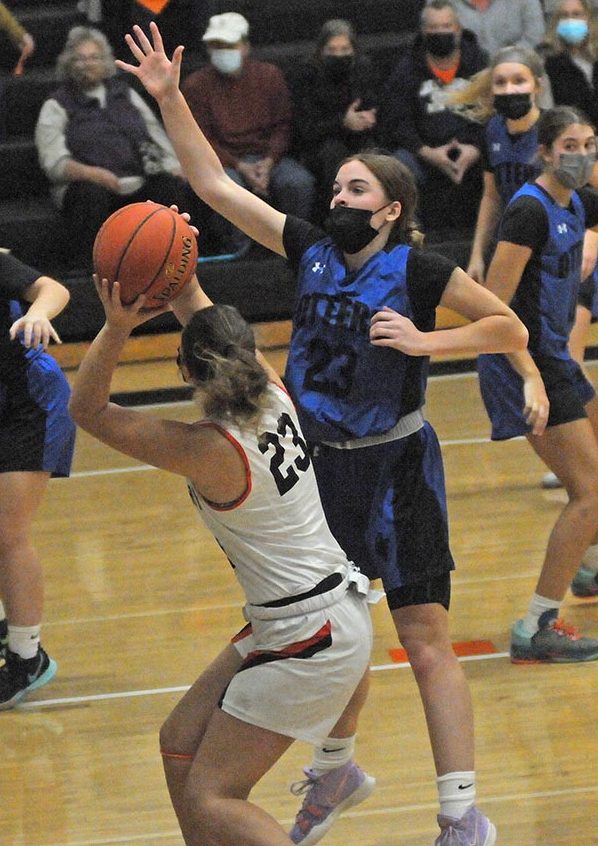 TIGER JUNIOR GUARD Makayla Swan tries to make a baseline move against the defense of OV senior Alice Keith during Friday’s girls’ basketball game at MUHS. The Tigers went on a fourth-quarter run to pull out a 35-28 victory. Independent photo/John S. McCright

Peduto hit a jumper at 4:30 to give OV hope, but the Tigers’ dominance on the boards paid off with putbacks by Turner and Sellers. At 3:00 OV called time down by 29-22. But after an OV turnover, Sellers hit two more free throws.

Down the stretch OV got four Keith free throws and a JoAnna Ray, but another Turner hoop and two Pitner free throws offset those points.

Keith scored 11 to lead OV, followed by Jackson with eight and Peduto with six.

Counter said he was confident his team would improve, especially with better health.

“I couldn’t be happier with the girls’ effort,” Counter said. “We’ve got some learning to go, but the girls are hungry, and they’ll come in and we’ll see what they can bring.”

Altemose said the Tigers would work to take better care of the ball. He praised their bench, and their resilience and maturity in the fourth quarter.

“In the past I would have had to take a ton of timeouts and talk them through everything. And they were for the most part able to handle that late-game stuff all on their own,” he said. “They attacked and played with confidence, and that’s a step forward for us.”

Turner said the Tigers “work really hard in practice to make sure we have tough defense,” and were happy to open on a positive note.

“It was very exciting,” she said. “I’m really glad we started the season off like this.”