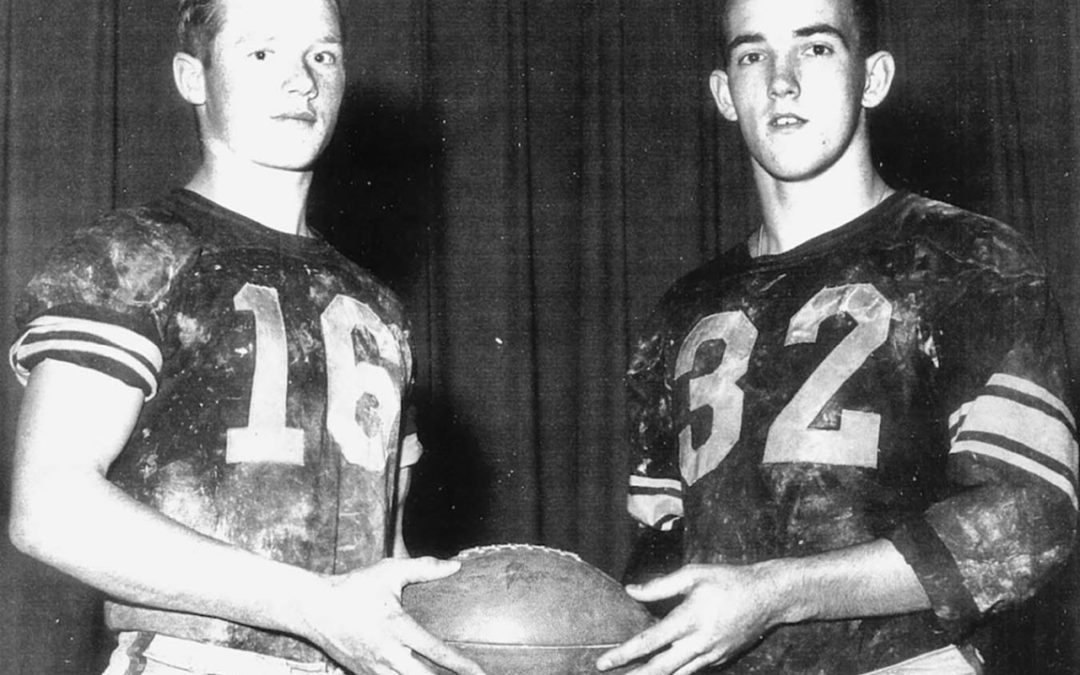 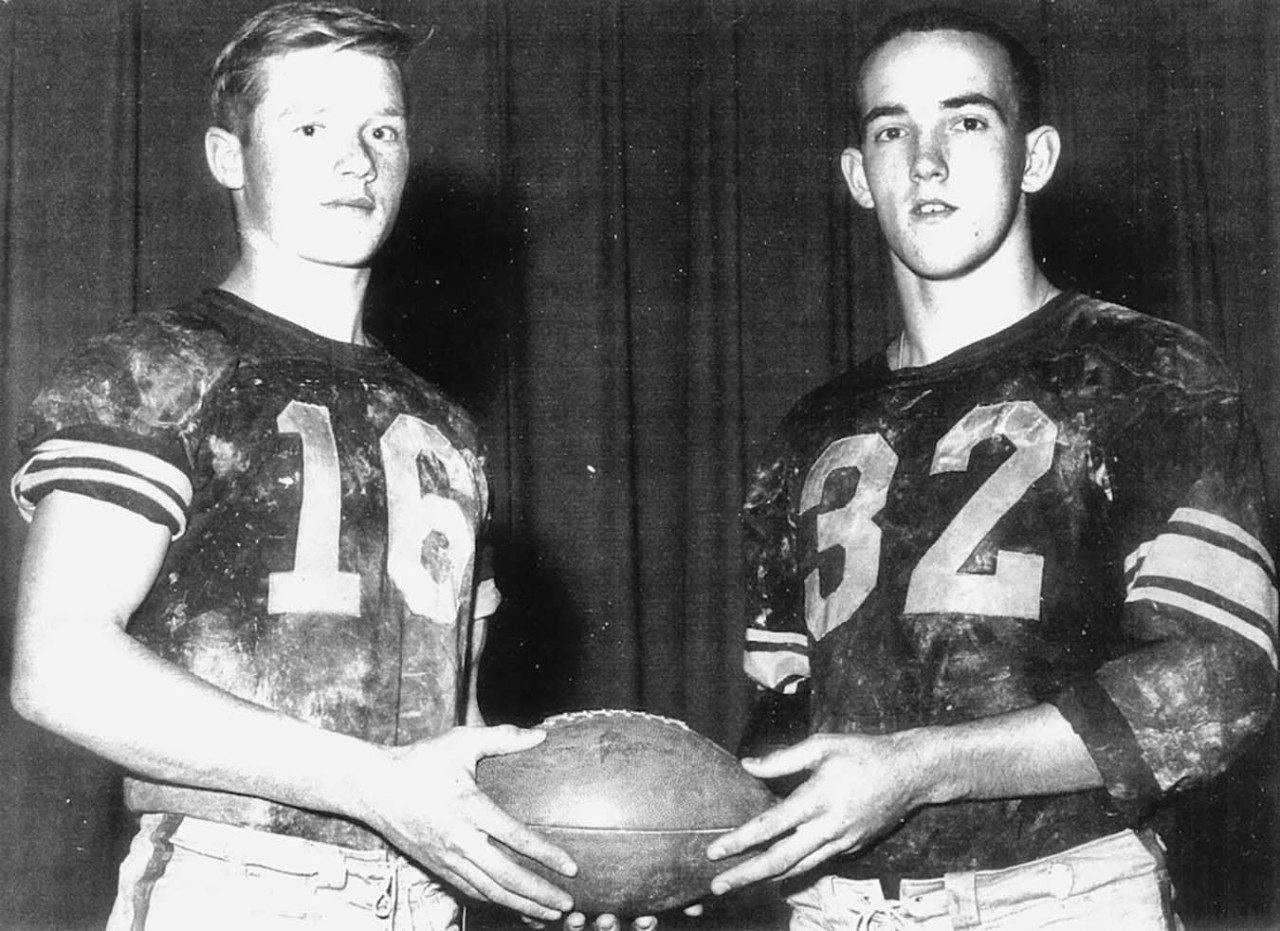 KEN BURTON (16) and Jim Billings (32) were the halfbacks on the undefeated MUHS Marble Valley League Champions in 1958. This “dangerous backfield duo” (Rutland Herald) also led Vermont in the Shrine Maple Sugar Bowl game to a 27-0 win against New Hampshire, the largest margin of victory for Vermont in the 66-year history of the game. Photo courtesy of the Burton family
By Karl Lindholm

On a warm day last summer, Roch MacIntyre was having lunch with his staff at his office and warehouse on Exchange Street in Middlebury. He saw a figure entering through one of the large open garage doors, a man about his own age, dressed indifferently to fashion, somewhat disheveled perhaps.

“Do you now?” he asked, and he got down into a three-point football player’s crouch.

Roch and Kenny were schoolmates at MUHS and teammates on the championship 1958 Tiger football team. Roch was just a freshman and Kenny was a senior — and Roch’s brother Mike was the quarterback of that great team.

There have been many great athletes from Middlebury Union High School over the decades, and Ken Burton has to be in the very top tier. 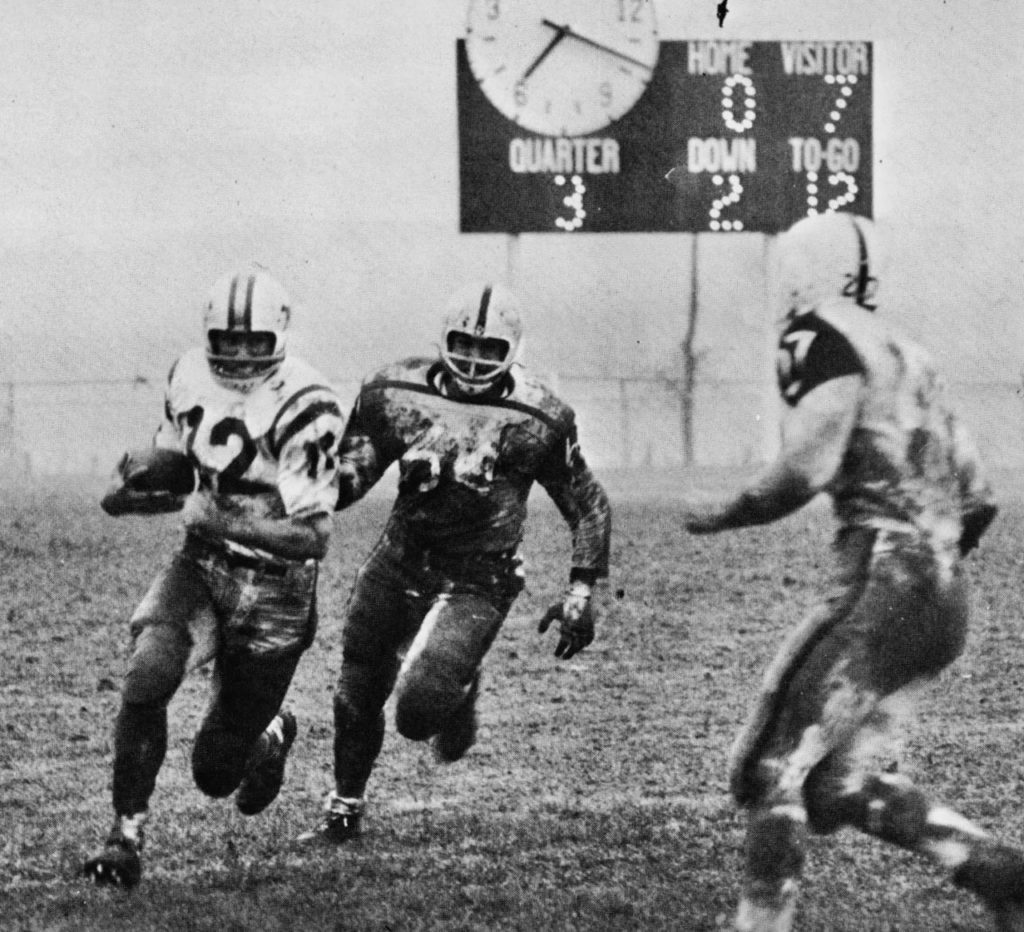 KEN BURTON RUNNING in the rain against Middlebury at Porter Field in the last game of his UVM career, a 14-0 win for the Catamounts. He scored a touchdown and gained 100 yards on the day (and had runs of 35 and 44 yards called back on penalties).
1964 UVM Yearbook, The Ariel

That 1958 team was the first undefeated football team at the high school in 27 years, a juggernaut who rolled over Fair Haven, 33-0, in their final game to secure the Marble Valley League title and a 7-0 season. They did so, as the Rutland Herald reported, with their “electrifying offense…. Middlebury’s dangerous halfback duo, seniors Jim Billings and Ken Burton, ran them dizzy.”

MUHS threw only one pass in the game (for a TD) and ran for 276 yards against just 22 yards for the Slaters. At the annual MVL banquet in Rutland at the Hotel Berwick, four Tigers were selected for the all-league first team, Burton, Billings, and linemen Big Don Keeler and Bob Ryan, and three were placed on the second team: Donald Burton (Ken’s brother), John Barrera and Mike MacIntyre.

Both Burton and Billings were selected to play for Vermont in the annual Shrine Maple Sugar Bowl game against New Hampshire in Hanover, N.H., at Dartmouth before 6,500 fans. Led by MUHS coach John Galascione, the underdog Vermonters crushed the favored Granite Staters 27-0, and the Tiger boys played crucial roles, both scoring in the game.

While Billings did not play football further, the past was but a prelude for Kenny Burton, who went on to spectacular gridiron success at the University of Vermont. The Catamounts may not have football now (the program was abandoned in 1974), but they did for a long time. The first UVM football game was against Dartmouth in 1886.

How good a player was Ken Burton at UVM? It would take the rest of this column space, and more pages, to list his athletic accomplishments and honors at UVM. He was inducted into the UVM Athletic Hall of Fame in 1977 and nominated for the Vermont Sports Hall of Fame in 2018 (he declined the honor). He is the only UVM football player in the sport’s long history to have his number (12) retired. He was 6’1”, 190 pounds and could fly. 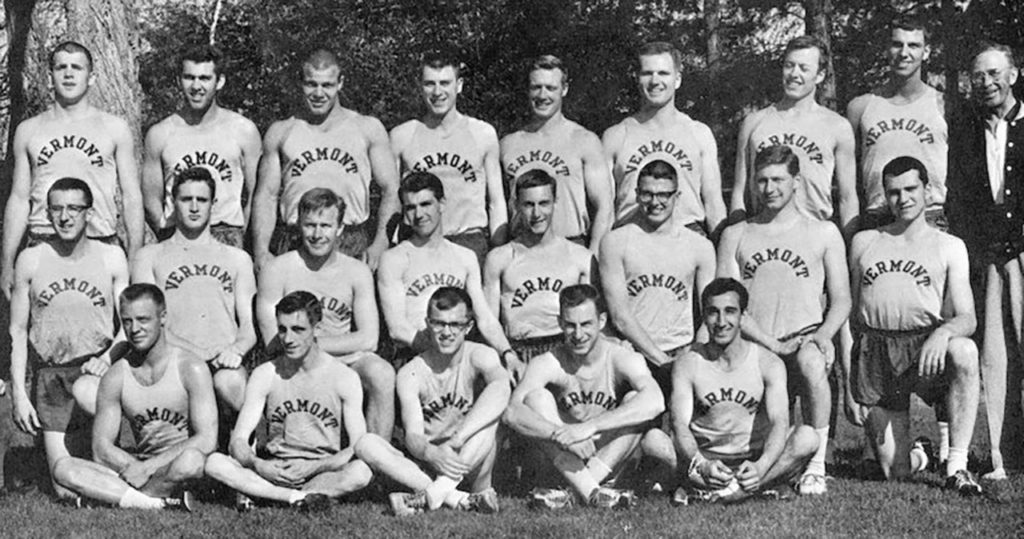 UVM ATHLETIC HALL of Famer Ken Burton of Middlebury (top row, middle) was on the track and field team as well as football, and set records in the discus and on the mile relay team.
1964 UVM Yearbook, The Ariel

When he graduated in 1964, he held virtually every rushing record at UVM — total yards, yards per carry and touchdowns. In his senior season, he was named to the All-Yankee Conference, all New England, and All-East teams. In the spring, Ken joined the track and field team and set the record for the discus throw and was a member of the mile relay team that set a UVM record.

The capstone of Ken’s football career was his last game as a senior against Middlebury, which had won the previous five games against the Catamounts. On a rainy day, a soggy field, he scored one of UVM’s two touchdowns and ground out 100 yards on 22 carries (he had runs of 35 and 44 yards called back because of “illegal shifts” by the Cats). The headline in the Free Press was “Vermont Defeats Middlebury, 14-0: Burton Breaks More Records.”

Kenny Burton was never the BMOC (“big man on campus”) that his football stardom would suggest, either at MUHS or at UVM. 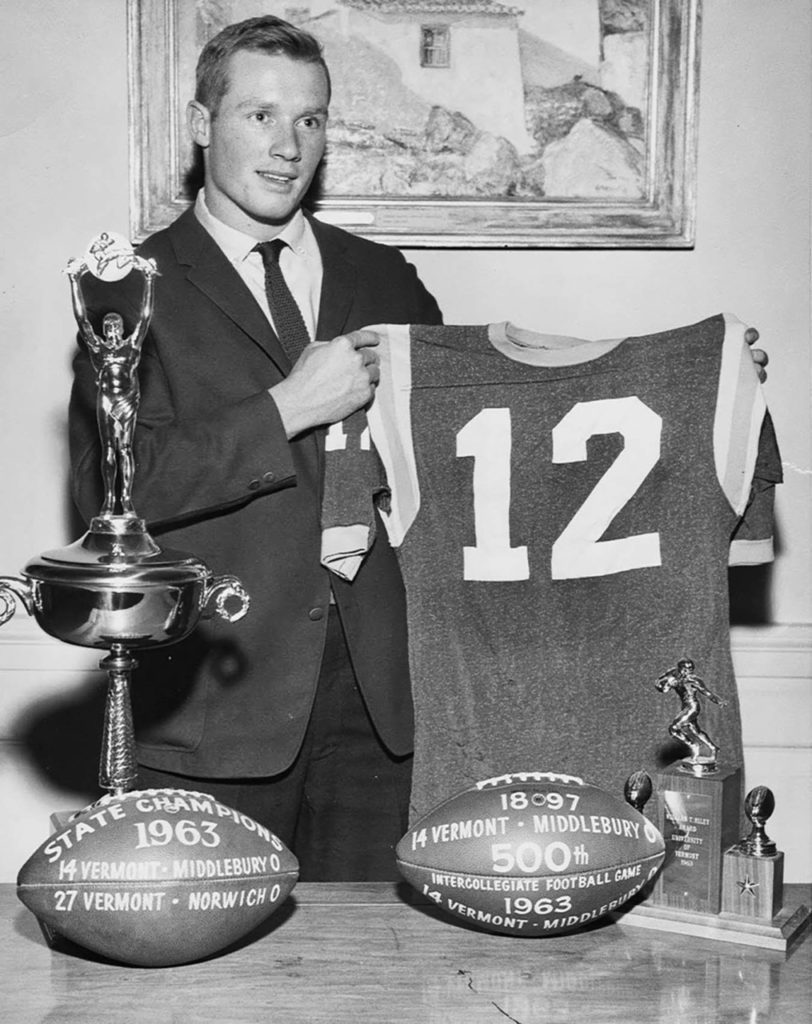 KEN BURTON, UVM class of ’64, MUHS ’59, is the only Catamount football player ever to have his uniform number retired in the program’s nearly 90-year history (1886-1974). When Button graduated, he held virtually every UVM rushing record.
UVM Archives

In high school, the Burtons owned a dairy farm in Cornwall and Kenny and his brothers Donnie, one year older but in the same grade, and Bruce, three years younger, milked their 30 cows by hand before school and rushed home after practice to do the evening milking. When Kenny and Donnie went off to college, the Burton farm, Abernethy Place, was sold to their MUHS teacher and mentor Frank Kelley, who with his wife Ann raised their five kids there.

In college, Ken was not a frat boy, a Kappa Sig or Sigma Nu, like many of his teammates. He was a married man, with a child, Kathy, born in his freshman year, and Ken in 1963. He had married his high school girlfriend, Gina Guarnaccia, the daughter of Sam Guarnaccia, a beloved Middlebury College Spanish professor and dean, and himself a great football player at Middlebury.

After UVM, Ken attended Cornell University and earned a master’s in Agricultural Economics, then, with his young family, lived and worked for a year and a half for the Ford Foundation in Argentina. His marriage dissolved after eight years, and the family split up. In the aftermath, never remarrying, Ken worked for three decades in New York City in an anti-poverty agency, before heading back this way after the devastation of 9/11.

Life was often a struggle for Ken. He was diagnosed fairly late in life with bipolar disorder.

The pandemic forced us all to be reclusive, and the loneliness of isolation was especially hard for Ken. In the months before he died, you may have seen Ken around town riding the motorized scooter he named “Ruckus,” visiting friends, doing errands, in his green reflective vest and distinctive black modified-football helmet.

Physically, Ken resembled to me one of his heroes, Pete Seeger, with wispy chin whiskers and hair in need of a trim, even down to his guttural voice. Ken and I became friends when he attended for a time the Unitarian Universalist Society in Middlebury. I found him enormously curious and bright, often weaving quasi-utopian designs for improving life locally, nationally and globally, in conversation and letters — implausible plans, yes, but brilliant in many ways.

Ken Burton died of natural causes (likely a ruptured aneurysm) on October 5 at his Halladay Road residence in Middlebury, just a couple of weeks before his 80th birthday. His life, he felt, was on the upswing when he died. His obituary is on page 6A.

There is in American culture an athlete-hero archetype, a young man who soars as a youth because of his natural physical gifts, whose life off the playing field, as an adult in a world where those gifts are not so applicable, is not an unbroken series of successes: he is in fact a poignant figure.