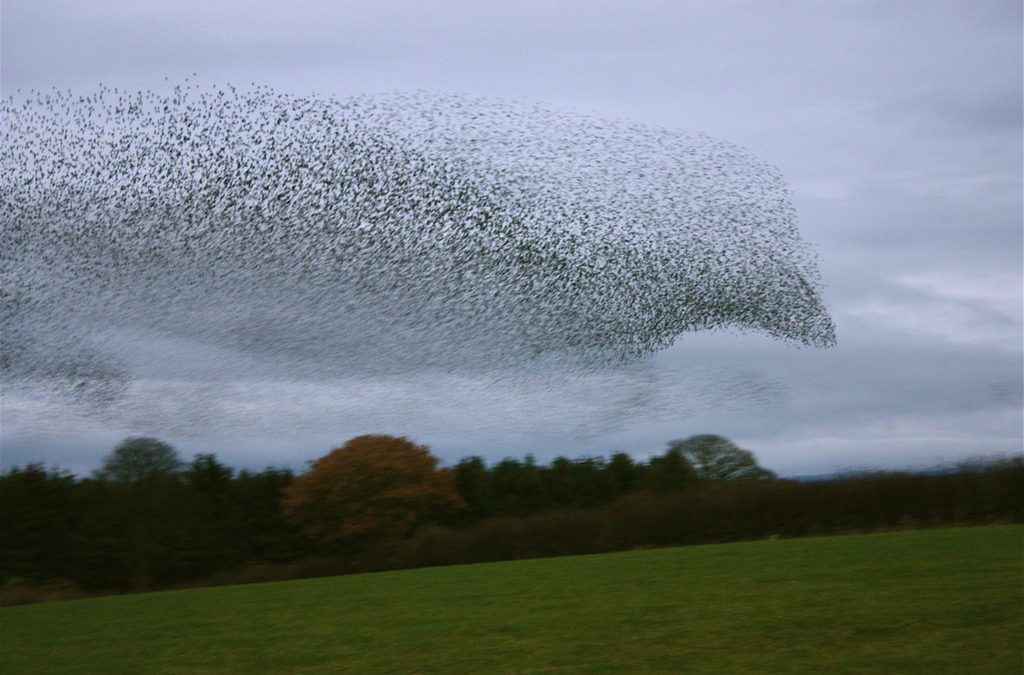 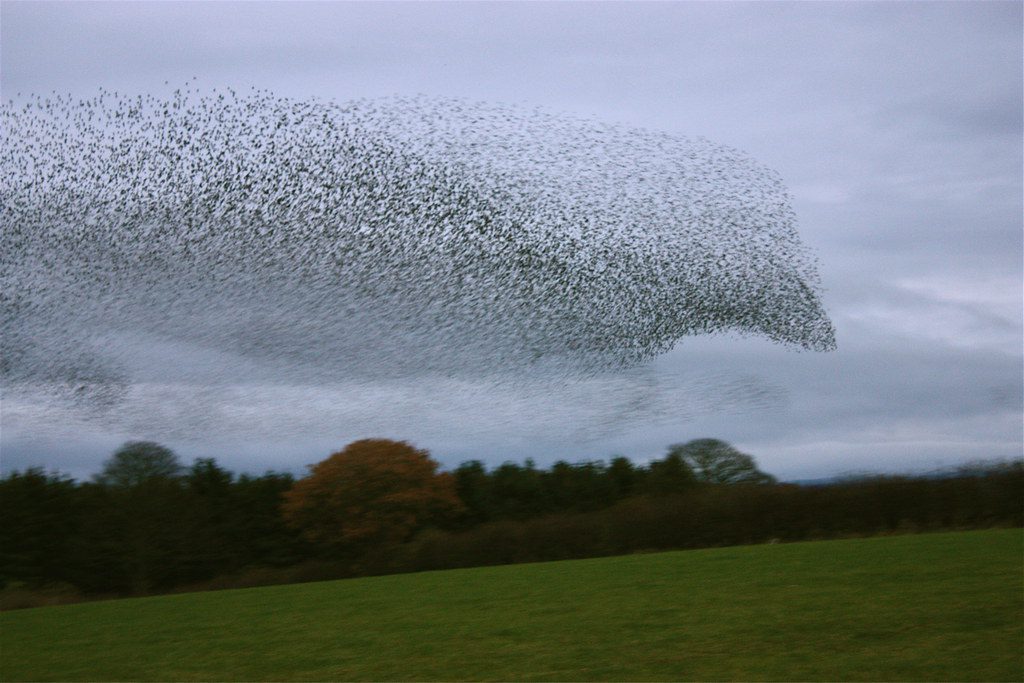 My daughters and I watched in fascination as the black cloud pulsed and swirled over our yard. Its movement was organic and unpredictable as it rose, fell, expanded, contracted, pulled to the left and then to the right. Finally, in response to a signal not accessible to human understanding, it dropped down onto our lawn.

The cloud moved as a single entity, but it was composed of hundreds of birds: European starlings.

It was the third such starling cloud we’d seen that day in our travels around town, and one of dozens we’d witness throughout the autumn of 2021. The phenomenon was gorgeous, mysterious, and left me with nothing but questions.

What was going on? How and why were so many individual birds moving as one? I didn’t recall seeing these starling swarms in past autumns: Was this something new, or something I’d failed to notice until now?

A quick bit of internet research satisfied my basic curiosity.

The starling clouds we’d been seeing are a common but fascinating aspect of starling behavior. They even have a beautiful name that captures perfectly their mysterious grace: They are called murmurations, after the noise made by all those starling wings beating at once. Starling murmurations typically begin as the weather turns colder in the fall and last through the winter months. They are made up of hundreds to thousands of individual birds.

I suspect that the starling murmurations I’ve witnessed have been on the smaller scale; still the sheer number of birds moving as with one body and one mind is awe inspiring. It’s both beautiful and terrible, calling to mind Biblical plagues, or Laura Ingalls Wilder’s description of a Rocky Mountain Locust infestation in On the Banks of Plum Creek:

A cloud was over the sun. It was not like any cloud they had ever seen before. It was a cloud of something like snowflakes, and thin and glittering. Light shone through each flickering particle…

The cloud was grasshoppers. Their bodies hid the sun and made darkness….The rasping whirring of their wings filled the whole air [.]

As it happens, starlings have more in common with locusts than their tendency to swarm; starlings are also considered invasive pests. The millions of starlings in North America are all descended from 100 birds that were released into New York’s Central Park between 1890-1891 by a man named Eugene Schieffelin. Schieffelin, a drug manufacturer and Shakespeare afficionado, was on a quest to introduce to America all the European birds mentioned in the Bard’s plays, and starlings get a nod in Henry IV, Part 1. (Schieffelin also holds the dubious honor of bringing the house sparrow to our shores).

What seemed like a good idea at the time became a textbook case of unintended consequences: The starlings, known for their pugnacity and muscle, multiplied and took over. The very murmurations I admired for their grace and synchronization cause millions of dollars in crop damage each year, and the USDA considers starlings to be agricultural pests.  In his Guide to Bird Behavior, Volume 1, Donald Stokes calls starlings, “…one of the least loved birds in North America[.]”

I may know all of this, but I still can’t shake the awe I feel whenever I see a starling murmuration. Perhaps they are reminders that a final product may be beautiful even if it’s made up of thousands of individual pests.

The most remarkable thing about a starling murmuration, if you’ve ever been part of any large group attempting to move in the same direction, is how they do it. Individual birds within a murmuration may move as quickly as 90 mph. How do hundreds of speeding birds dip, dive, shift direction, and ascend to the treetops in such precise unison?

Scientists have studied murmurations for decades and worked up sophisticated mathematical models of starling behavior. Early ornithologists assumed that the starlings used some sort of telepathy, but the answer turns out to be more simple and amazing than that: Starlings within a murmuration are completely attuned to the behavior of their neighbors and move rapidly in response. There are no leaders in the murmuration, and it would be impossible for a single bird to track the movements of hundreds or thousands of others, so in 2013 Italian physicists identified the magic number: seven. The entire murmuration moves in synch because each bird within it focuses on the movements of its seven closest neighbors.

I could pull out the obvious metaphors right now: How murmurations exemplify the power of communities working together, or loving our neighbors, or keeping our focus local.

But what fascinates me most about murmurations is not their symbolism; it’s that, as of now, nobody has yet been able to say definitively why they happen.

There are all sorts of theories. Overwintering starlings roost in enormous flocks, so murmurations may be the group’s method of throwing off predators before the flock settles down for the night. Or they may be how the flock communicates about good feeding sites. Or a means of keeping warm. They may be many things, but nobody knows for certain.

The older I get, the more I am drawn towards the places where there is no certainty. The phrase that sends shivers down my spine is, “I don’t know.”  Is anything more honest or more mysterious than that statement?

I used to assume that the wisdom of age came from knowing more, from acquiring enough information to reach a place of certainty. Now I wonder if the opposite is true; if wisdom comes from accepting the fact that we will die with many of our questions still unanswered, from acknowledging that there are many things we just don’t know, from being at peace with uncertainty.

Or perhaps it’s a different sort of certainty: I am certain that we live in a world of awesome beauty and wonder, in which I don’t need to know why in order to marvel at the great cloud of beating wings twisting and dipping over my field.