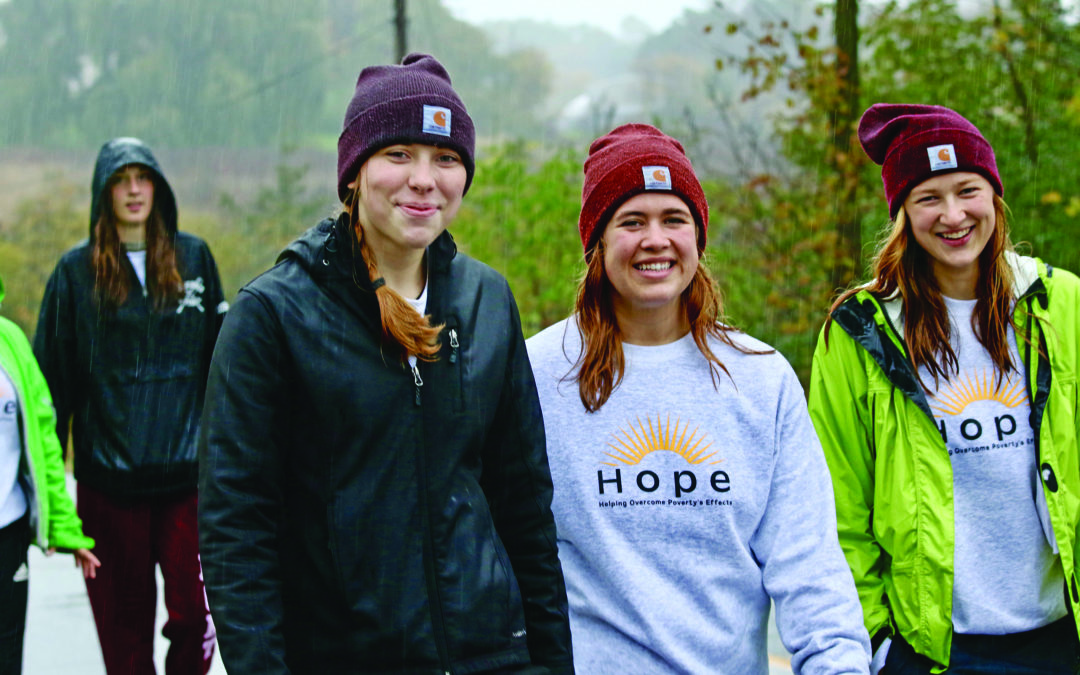 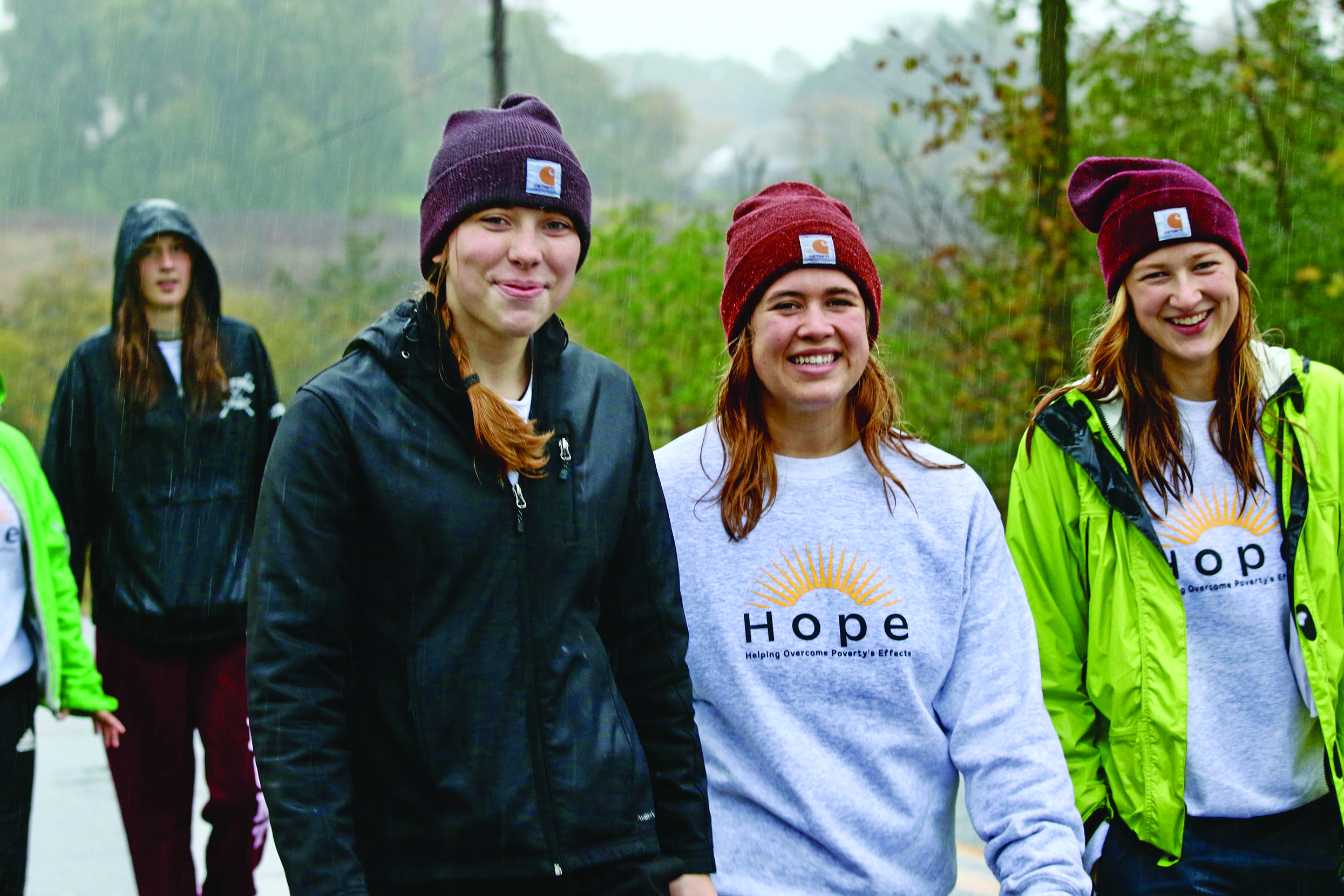 VUHS SENIORS GENEVA Verburg, left, Jasmine Beenen and Ryley DuBois smile through the raindrops on Green Street in New Haven during Monday’s VUHS Senior Class Walkathon. The annual event raises money for the charity of the class’s choice, in this case about $3,100 and counting for Helping Overcome Poverty’s Effects, or HOPE. Independent photo/Steve James
By Andy Kirkaldy

VERGENNES — The annual Vergennes Union High School senior class walkathon went on as scheduled on Monday despite rainy, cold weather, and the Class of 2022 exceeded its goal of raising $3,000 for the social service organization Helping Overcome Poverty’s Effects, known as HOPE.

As of midday on Monday, the seniors had amassed more than $3,100 in pledges through direct donations and in their gofundme.com account, which they planned to keep active through early November (gofund.me/c7e296a8).

The seniors chose HOPE because they had seen the Middlebury nonprofit’s efforts to help those affected by the COVID-19 pandemic, according to class treasurer and walk co-organizer Olivia Brooks. 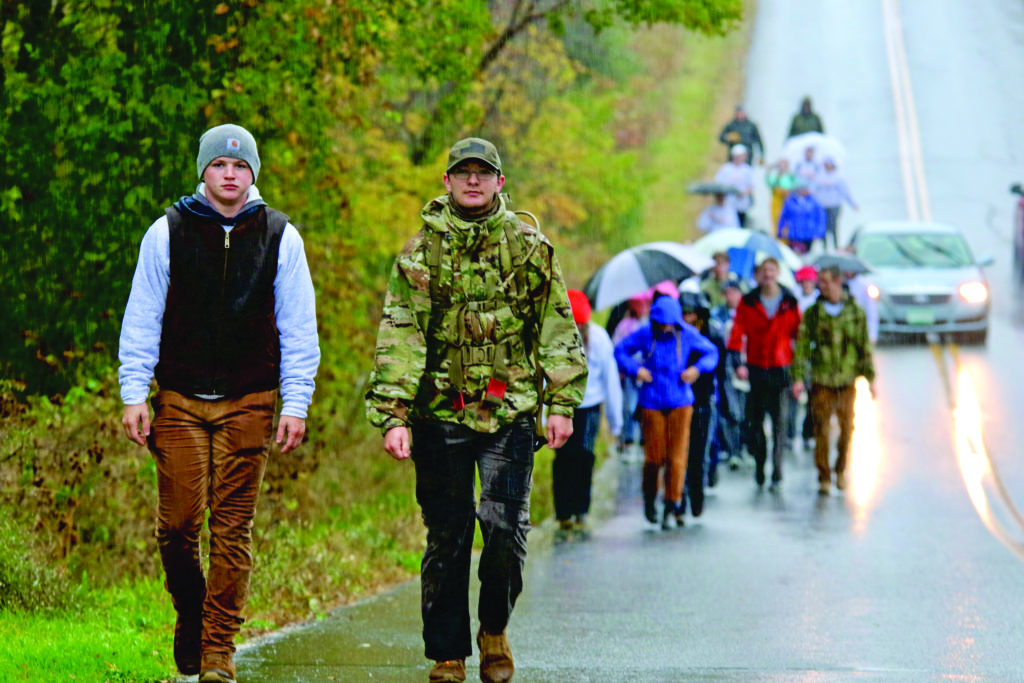 KYLE BACON, LEFT, and Chris Therrien walk ahead of a group of classmates along Green Street in New Haven during the annual VUHS Senior Class Walkathon fundraiser. Organizers agreed in advance to cut the route short, but the seniors still walked about halfway to Middlebury through rain and cold.
Independent photo/Steve James

Brooks said other suggestions were floated at a September class meeting, but that HOPE emerged as the seniors’ overwhelming choice in a follow-up survey.

“We’re a class that has really been impacted by COVID. Our sophomore year got cut short, and we’ve really seen the effects that COVID has had on everybody’s financial situation for the past three years of high school,” she said. “And HOPE has done a lot to help people who have been struggling to pay rent and pay their bills and take care of their families.” 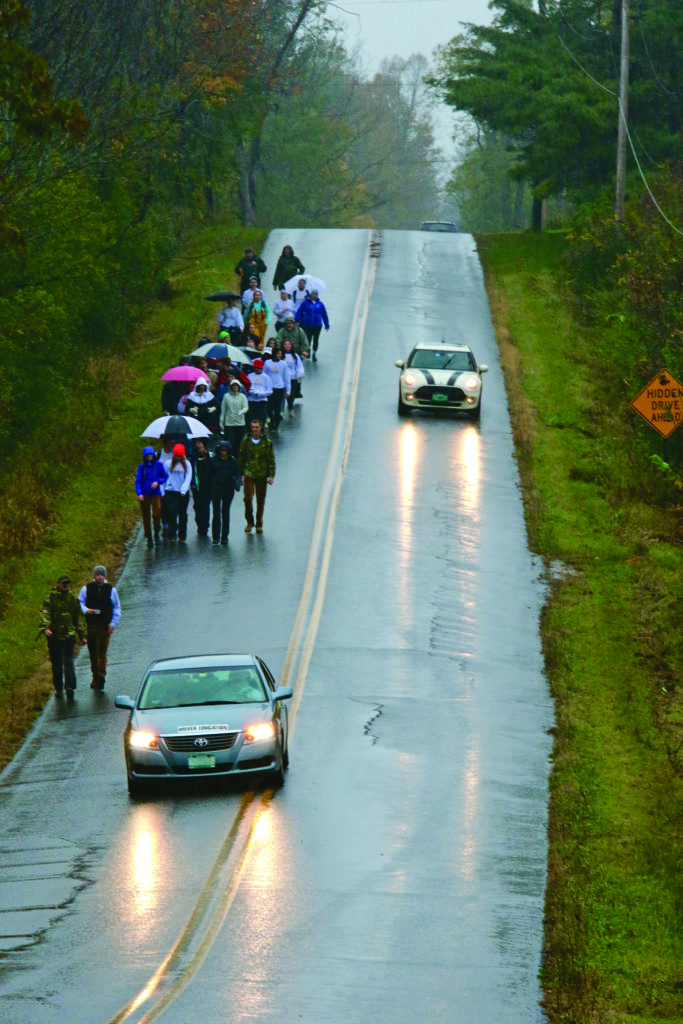 THE VUHS SENIOR Walkathon went about halfway to Middlebury through Waltham and New Haven on Monday. Plans called for the walkathon to end in Middlebury, but, given rain and cold, organizers cut it short.
Independent photo/Steve James

About 40 of the class’s 63 members walked, a good turnout, Brooks said, considering the weather and academic conflicts for some seniors.

Brooks and the other class officers — President Ian Henderson, Vice President Jonah Mahé and Secretary Audrey Scribner — polled fellow seniors on their feelings about postponing the event given inclement weather, and she said the walkers were enthusiastic.

“Spirits were pretty high. We contacted the class Saturday and said it’s going to be really rainy and pretty cold. We’re thinking of rescheduling. What do you think?” Brooks said on Monday. “And everyone was, no, it’s a really good cause. We want to walk. And everyone was in the same spirits today, and everyone had a really good time.”

The original plan was for the class to walk all the way to the Middlebury town green, but the class did acknowledge that distance was not realistic given the forecast. The seniors changed the goal to the New Haven intersection of Green Street and Route 17, but also exceeded that goal by a couple miles.

“Once we got to the intersection we had about an hour left with our bus. So everyone voted and we decided to keep walking,” Brooks said. “So we walked about an extra two miles.”

She said the class is also excited about next spring’s annual Back to the Roots program, in which the class members visit their former elementary schools to perform community work projects and to serve as role models for younger students about to enter their middle school years.

Brooks also said members of the Class of ’22 have embraced another initiative.

“We’ve been working to help the atmosphere at the high school, to get all the other classes to be more tight-knit. We have a Senior Ambassador program right now, where a couple of us in a group will go to a ninth-grade morning meeting, talk to them about class bonding, expectations within the school, really try to help the ninth-grade class,” she said.

Brooks said her class has bonded.

“We’re all really close, especially because we only have 63 kids. We have been able to grow a lot closer,” she said. “Everybody’s friends. There’s no drama in our class.”

If anything, COVID-imposed separation has made the seniors appreciation for each other grow.

“I think we have definitely pulled together more,” Brooks said. “I remember when we came out of the hybrid learning last year everyone was just so excited to see each other. Everyone was together after that.” 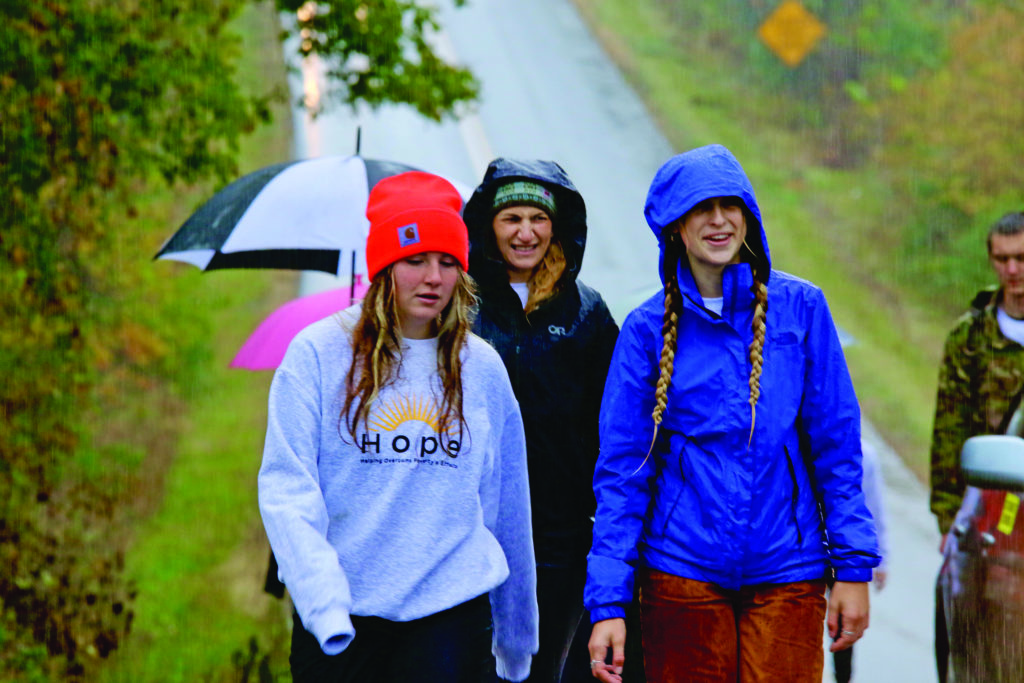 SENIORS ELLA HAMELINE, left, and Mykenzie Duffy, rights, flank teacher Julia Beerworth, rear, and all are bundled up against the elements, stroll along Green Street in Waltham during Monday’s VUHS Senior Class Walkathon, which raised $3,100 for HOPE.
Independent photo/Steve James 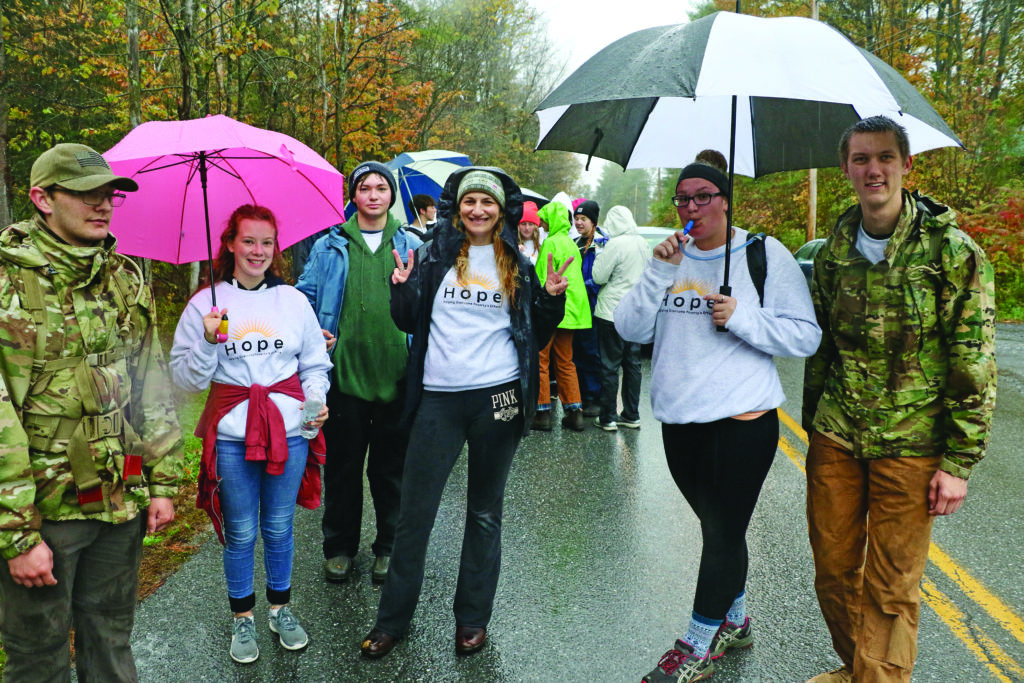