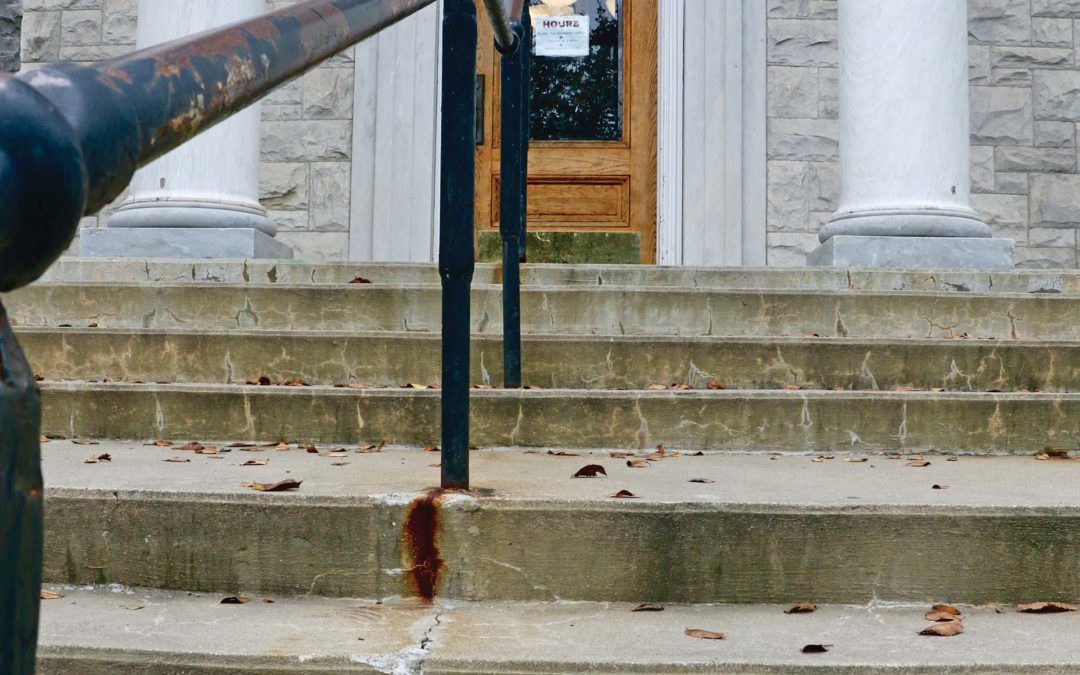 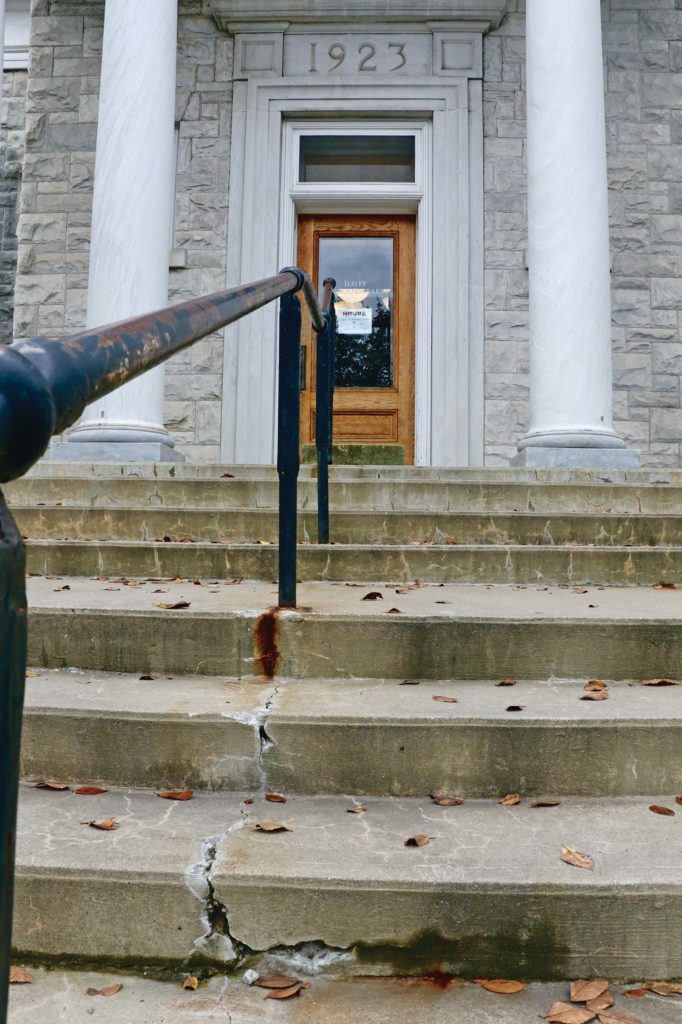 THE FRONT STEPS at Ilsley Library are dangerous in the ice and snow and there are cracks that freeze over from water leaks. Library officials are restarting an effort repair and expand Middlebury’s public library. Independent photo/Steve James

MIDDLEBURY — Middlebury officials have agreed to jumpstart a dormant effort to improve and expand the Ilsley Public Library, whose deficiencies have become even more apparent during the COVID-19 pandemic, according to library supporters.

The selectboard recently authorized a new group of six people to review past assessments of library infrastructure followed by formation of another group to formalize a design proposal for needed upgrades.

In 2017 Ilsley trustees recommended a $9.6 million upgrade for the stately library building at 75 Main St. It was erected in 1924 and has been added to through the years. It is the busiest Vermont library among those with comparable budgets, ranking first in visits, circulation, program attendance, and public computer use, according to state statistics.

Frequent users of the public amenity have become well-versed in its needs, which — according to a study performed by Burlington architect Gossens Bachman — include waterproofing the entire perimeter of the original 1924 structure; modernizing the space, now characterized by fixed walls and stacks, low ceilings and support columns; repairing a poorly lit children’s area that suffers from ground water leaks, mold, and a broken wastewater system that causes offensive odors; installing a service area for teens and tweens; and improving the building’s heating, ventilation and air conditioning (HVAC)  system.

The aforementioned $9.6-million plan, among other things, called for removing the library’s two older additions and installing a new addition that would increase the building’s square footage from around 19,000 square feet to more than 25,000. The proposed expansion would have included ground-level entry plazas at both the front and rear that could be monitored from the circulation desk, extensive glass to offer natural light inside the structure, a central elevator, a larger children’s area with secure entries and a community room with modern technology, and a designated area for teen and tween patrons.

While Middlebury selectboard members at the time acknowledged the library’s needs, they weren’t on board with the proposed project price tag. So Ilsley trustees in early 2020 agreed to abandon the $9.6 million plan and instead explore other designs to address the institution’s space, configuration and condition deficiencies.

But competing projects and a worldwide pandemic again relegated the Ilsley’s needs to the backburner.

“There have been a series of events since then that have made it challenging to move forward,” said Ilsley Board President Joe McVeigh.

Those challenges, he said, have included:

•  The absence of a library director when the expansion/renovation plan was first presented. The former director, Kevin Unrath, had left to lead Shelburne’s Pierson Library. Dana Hart took over reins of the Ilsley in late 2017. 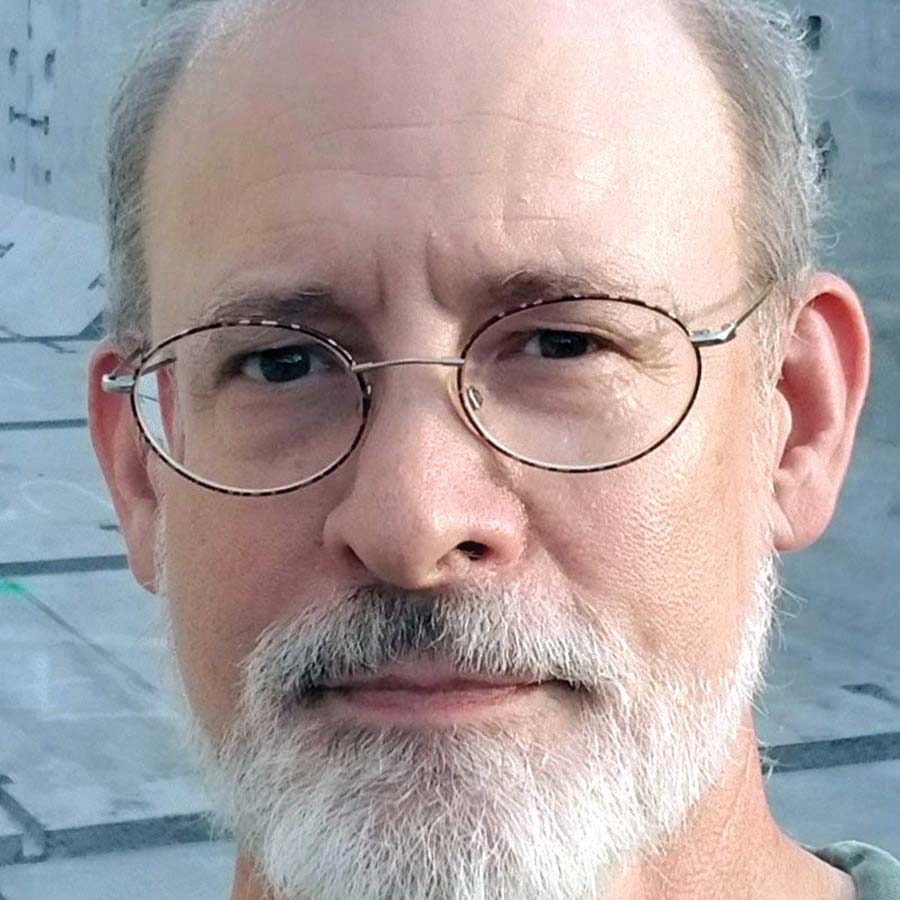 •  In 2018, work began on the massive downtown Middlebury tunnel project, which wrapped up this summer. Ilsley officials reasoned it wouldn’t be wise to pursue a library project during that span.

•  The COVID-19 pandemic, which kicked off in February of 2020. Again, it made no sense to pursue a project when library services had to be dramatically curtailed due to social distancing mandates.

The advent of a COVID vaccine and completion of the tunnel project have emboldened trustees to again advocate for the Ilsley’s capital needs.

“We’ve been working carefully on developing a vision for a building, considering an alternative design,” McVeigh said.

With that in mind, trustees asked the selectboard earlier this month to form a design team to move a project forward. The selectboard instead opted to take the less dramatic step of assembling a small “working group” made up of two trustees, two selectboard members, Hart, and Judith Harris, a consultant from Lincoln. The group will review previous work done on the Ilsley’s capital needs “to make sure we’re all starting from the same place going forward, and not duplicating any efforts unnecessarily,” according to Hart.

Once the working group has done its part, a design team would then grab the baton and shape an appropriate project based on the Ilsley’s current needs and a price tag that taxpayers can afford, Hart added.

Plans call for the new working group to complete its job within five months, followed by creation of a design team.

“Given all of the legwork that’s been done, I would expect we could move forward quickly given all the good work that’s already been done,” Hart said.

But not quickly enough on at least one pressing need: A new HVAC system.

“The lack of an HVAC system during COVID was a huge concern,” Hart said. “During COVID, we realized just how much that fresh-air exchange matters. We could have theoretically opened earlier or accommodated more people sooner had we been able to have adequate air flow in the building.” 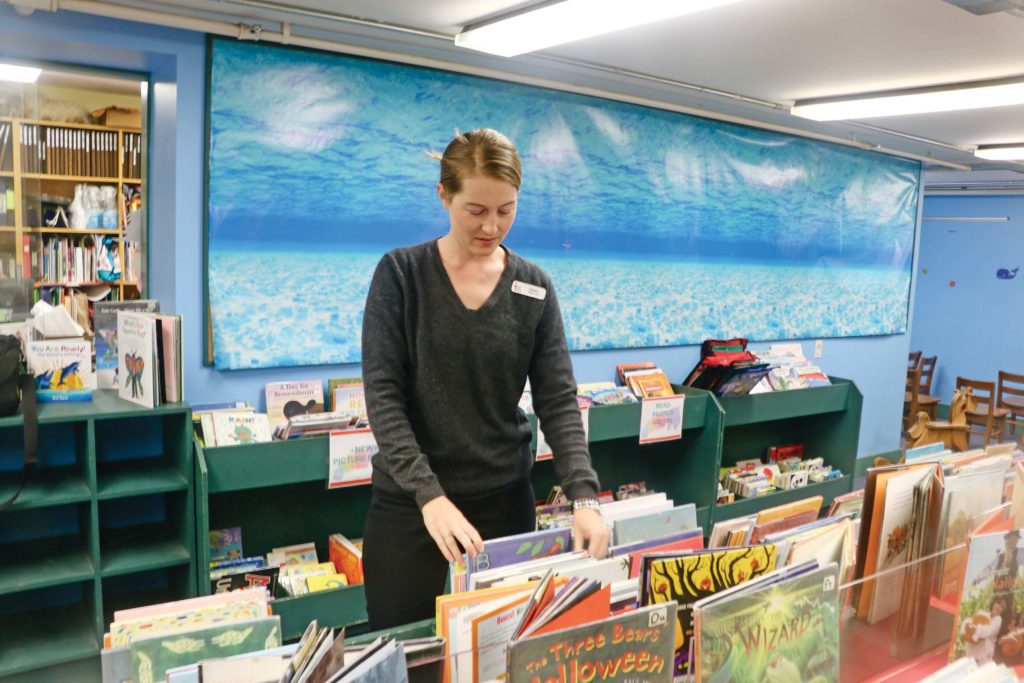 ILSLEY LIBRARY DIRECTOR Dana Hart thumbs through books in the children’s room at the Middlebury library, which Hart and others say is cramped and has no good sight lines to check on who is in the library. Independent photo/Steve James

The town has spent two years planning for replacement of the system — to include cold-climate heat pumps — for an estimated $700,000.

Financing will be included as part of the library’s fiscal year 2023 capital improvement budget requests. Hart said the HVAC project might require a bond vote.

One of the advantages of the new HVAC system, according to Hart, is it will be easily adaptable to any future renovation and expansion of the library building.

“In a way, we can think of it as phase one of the renovation/expansion,” she said.

“The entrances have always been a huge problem,” Hart said. “During COVID, you really want to have people enter one way and exit another … But we don’t have two handicapped-accessible entrances. The entrance that has the highest foot traffic — our side entrance — is in a stairwell. So when you’re trying to have people enter and exit while maintaining five feet of distance, that is very difficult in a tight stairwell.”

McVeigh noted prevailing safety concerns that also need to be addressed, some of them relating to the library’s restroom setup. 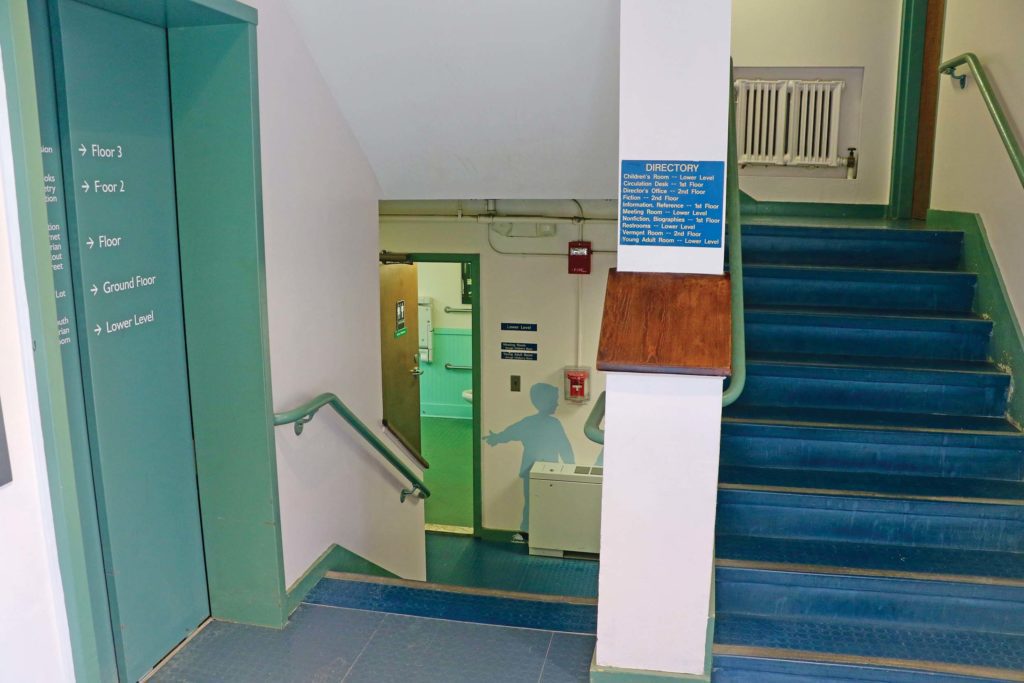 THE STAIRS DOWN to the Ilsley bathrooms. Independent photo/Steve James

“They can only be used by one person at a time,” he noted. “They are sometimes used for inappropriate purposes, and are immediately next to the children’s room. No one can monitor who comes in and out of the door.”

Hart and McVeigh both hope Middlebury residents will take an active role in influencing library upgrades.

“It’s not just fixing the elevator and making sure we have airflow — those are really important,” Hart said. “It’s also an opportunity for us to think about what libraries are, what they can be, and hopefully bring a much more dynamic and engaging library to Middlebury.”

“We’re optimistic, we’re hopeful, but to be honest we don’t exactly know what the outcome is going to be,” McVeigh said. “That makes it interesting.”