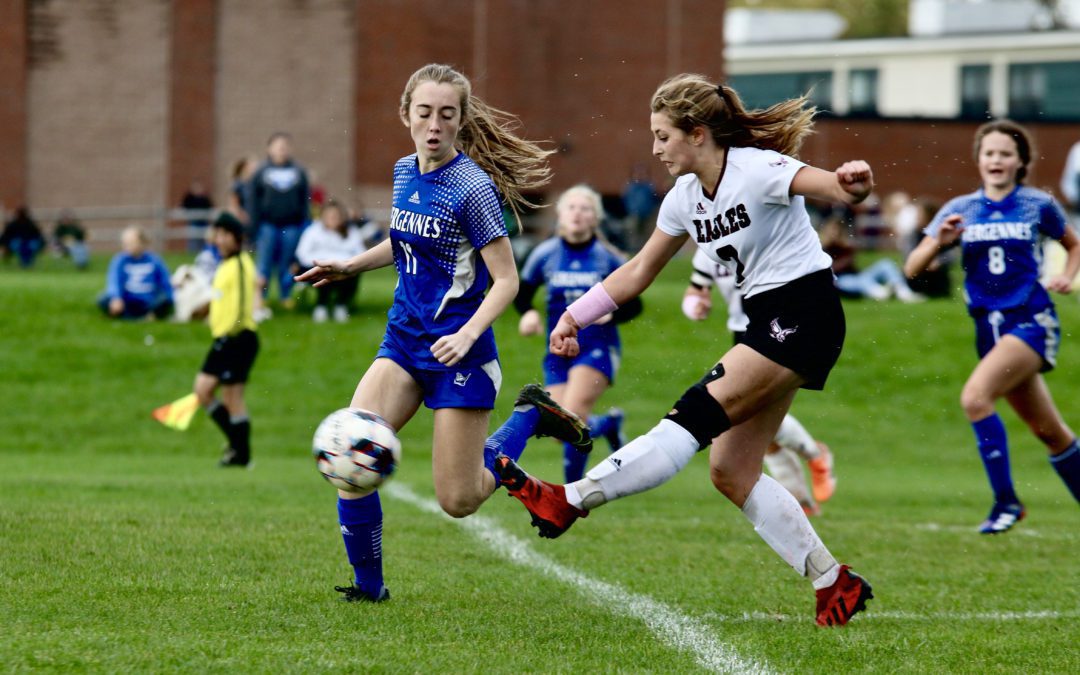 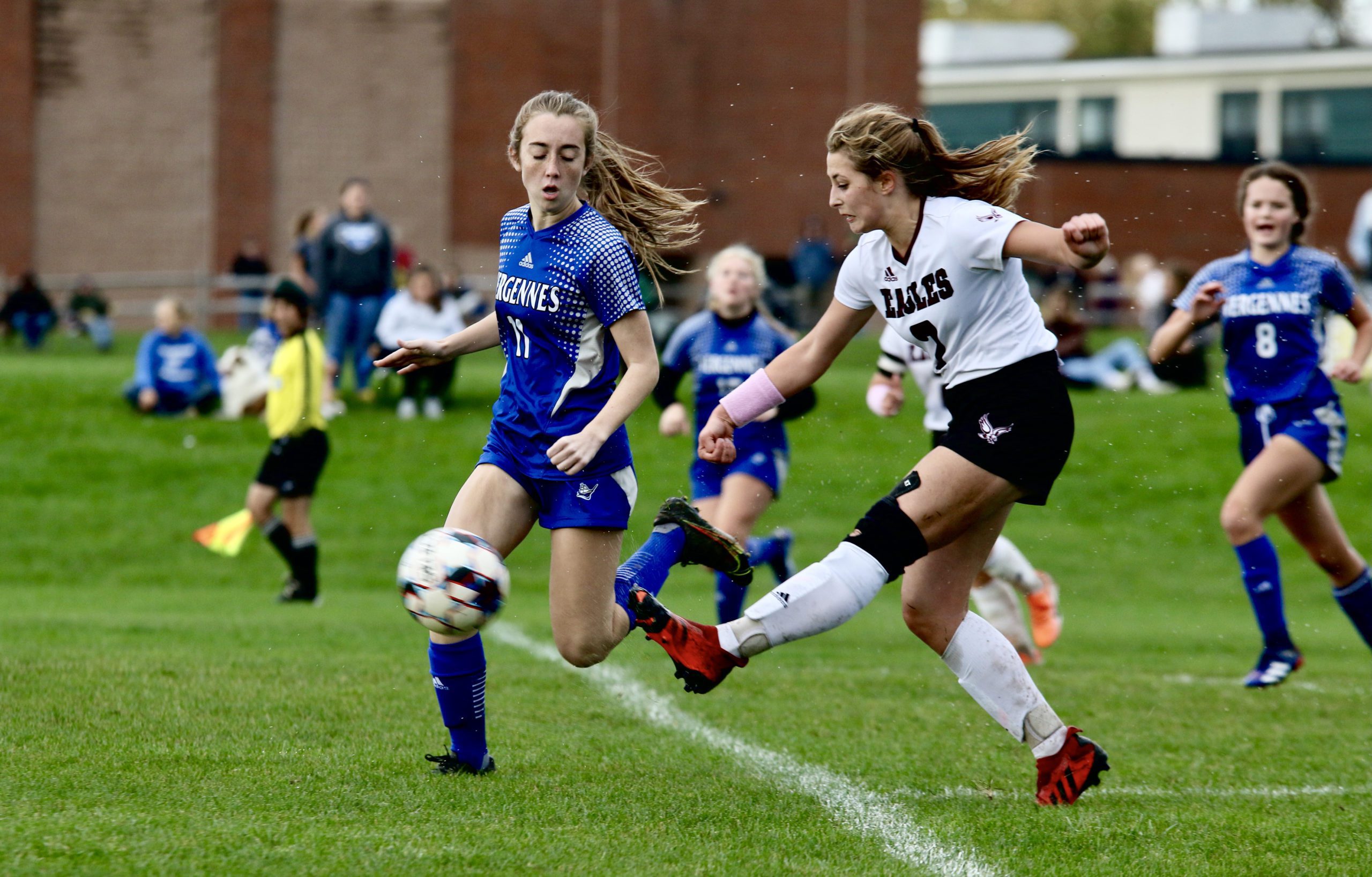 VERGENNES — The Mount Abraham girls’ soccer team continued its late-season surge on Friday, when the Eagles bested Vergennes, 2-0, in the final regular-season game for both teams.

The Division II Eagles have won three of their past four games, and their other result in that stretch was a tie vs. top D-II team Rice, a game that Coach Dustin Corrigan said could have gone either way.

They finished the season at 5-8-1, but five of those losses came to D-I teams, including an overtime setback to a 10-win Rutland team. 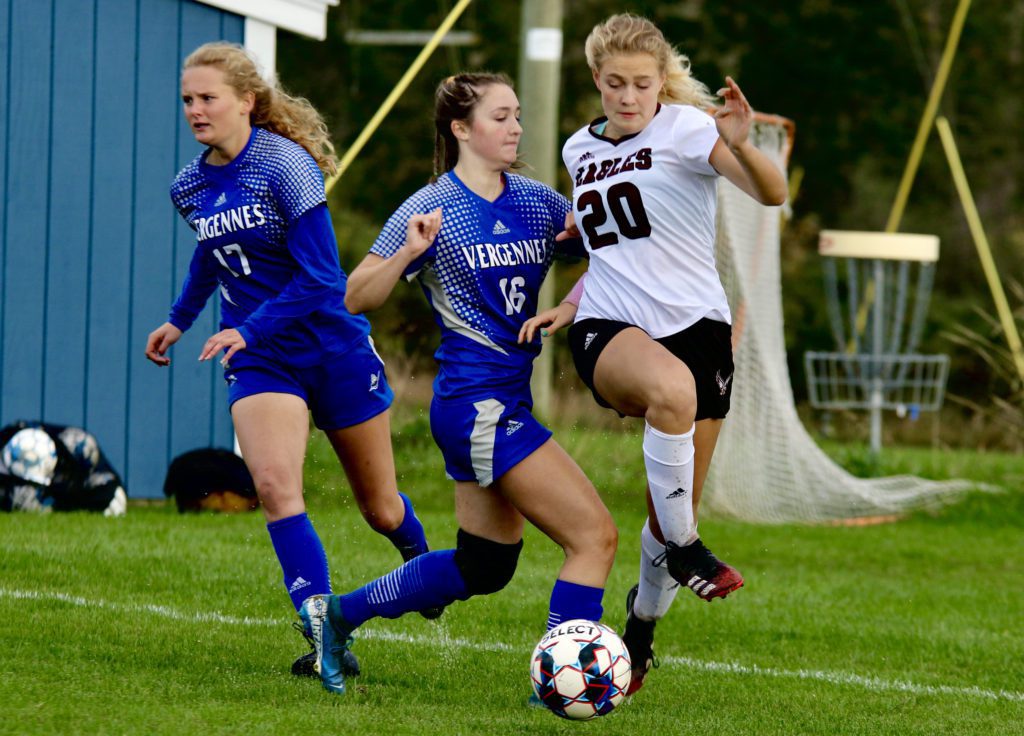 Corrigan said he and the Eagles are pleased with their progress over the course of the season.

“Our players have been working hard, and they stick together,” Corrigan said. “We’ve been steadily improving every game we’ve played, and things are starting to come together at a pretty good time, we feel.”

VUHS was coming off a 2-1 win against a shorthanded Middlebury team two days before, but the Commodores were unable to maintain momentum on Friday.

The fact the Eagles took charge early in Friday’s game and scored in the 10th minute — on a beautiful strike by midfielder Natalie Atkins — took the wind out of the Commodores’ sails, Maneen said.

“We just had trouble controlling the ball today. Our first touches let us down, (and we had) trouble keeping possession,” Maneen said. “When you’re chasing the game the whole time, unfortunately that’s going to be the result.”

The Eagles’ edge in possession showed in the stats: They outshot the Commodores, 16-2, and earned more corner kicks, 6-3. 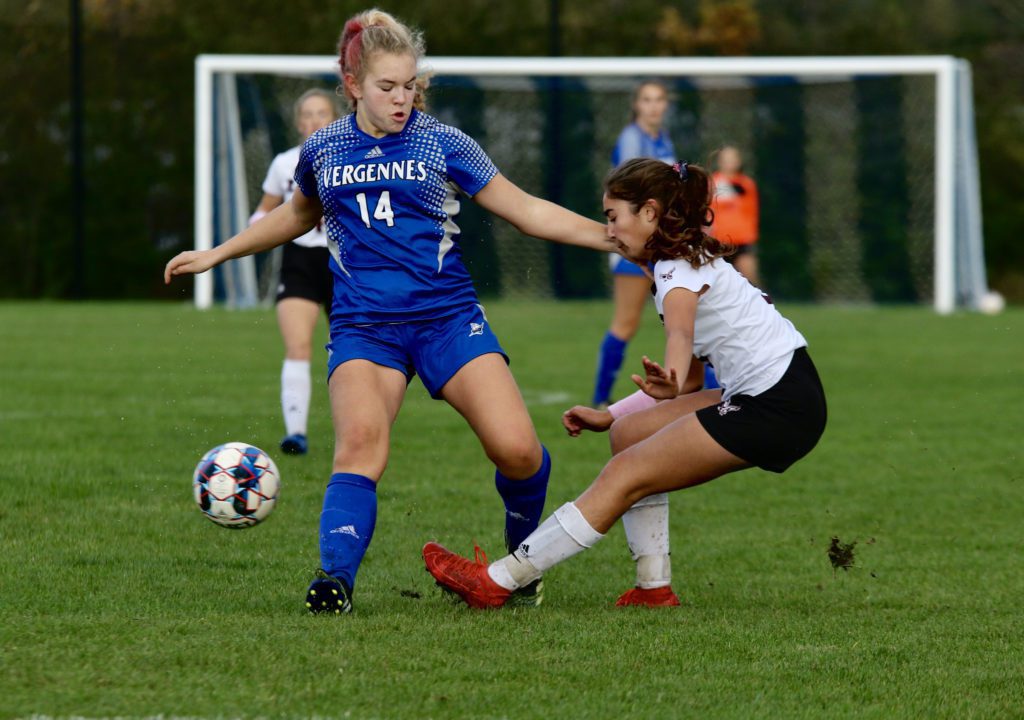 And they scored on their second shot, not long after VUHS goalie Carlyn Rapoport stopped Eagle midfielder Lucy Parker’s long-range bid in the ninth minute, a tough save because the ball skidded on the soggy turf.

The Eagles bottled the Commodores in their own end after that play. Right back Elena Bronson, one of only three Eagle seniors, won the ball on her flank about halfway into the VUHS zone and served a strong diagonal ball to Atkins on the far side of the box. Atkins let the ball roll to her left foot and unleashed an 18-yard bomb back into the upper right corner at 30:32.

Despite the Eagles’ advantage in possession, their true chances were few in the first half. Late in the period Rapoport bolted off her line to beat middie Dakota Laroque to another Bronson cross. The Commodores didn’t put a shot on goal in the first half, but in that half they earned all their corner kicks, on one of which Eagle goalie Jo Toy won the ball in a crowd.

The Eagles pressed more effectively for most of the second half, launching nine of their shots and forcing Rapoport to make three of her five saves. Commodore Madelyn Hayden also made a key defensive play on Atkins. With an open goal looming, Hayden knocked the ball away from Atkins after a Maia Jensen serve from the right rolled to her with an open goal looming.

The Commodores did have a good offensive stretch midway through the half. Senior middie Allie Croke put a hard, skidding shot on Toy that the Eagle goalie handled, and shortly afterward Toy made a more routine stop on Kennedy Decker for her second and final save.

The VUHS defense of Ella Hameline and Anna Carr in the middle and Sam Hallock and Emerson Rice on the flanks also generally held up well. 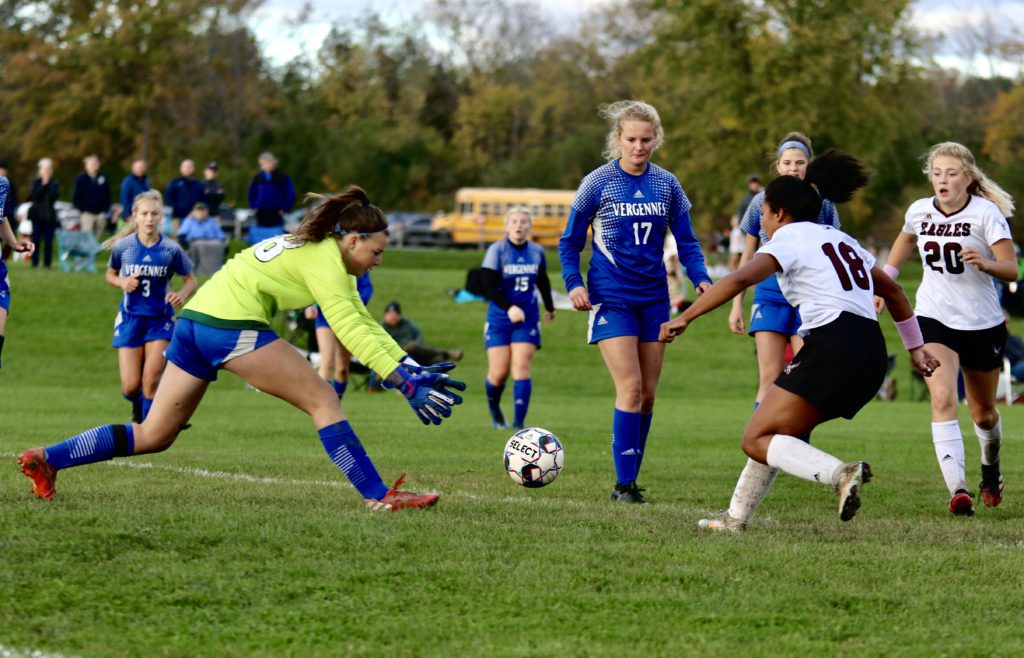 COMMODORE GOALIE CARLYN Rapoport stretches to pick up a ball sent into the VUHS box as Eagle midfielder Safi Camara charges after it. The visiting Eagles stretched their unbeaten string to four games with a 2-0 victory over Vergennes on Friday. Independent photo/Steve James

The Eagles’ second goal did come on a breakdown, however. At 18:14 Annie Dufault belted a corner kick into the box from the right side, and it deflected in off the Commodores into the near corner.

Like the Eagles, the Commodores have played a tough schedule, one that on Friday Maneen said will help them to surprise opponents in the D-III tournament.

“We’ll see what happens,” Maneen said. “That’s always paid off for us in the past, and we’ll see if it can happen for us again this year.”

Corrigan said the Eagles would like to make a postseason run, even while acknowledging their record will not earn them any home games, and they will face tough teams right from the start.

“We’re looking forward to the playoffs. It’s like an all-new season, and I think we’re a very different team than when we started this year. It’s a really good group to coach and be a part of,” he said. “I don’t think there’s anyone out there we can’t play with.”