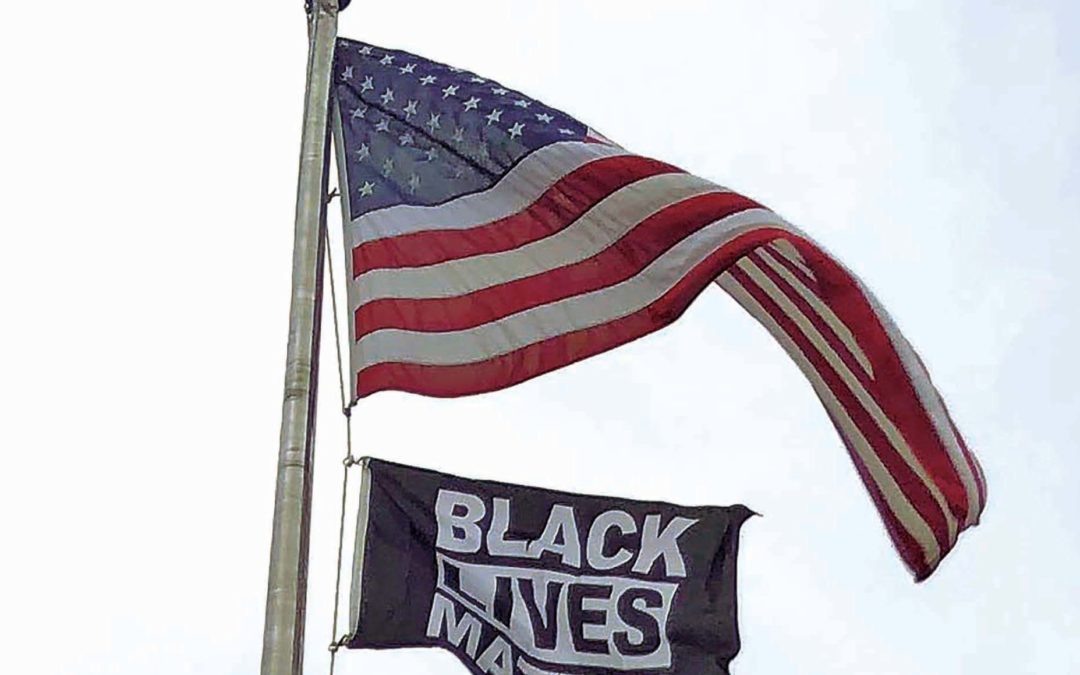 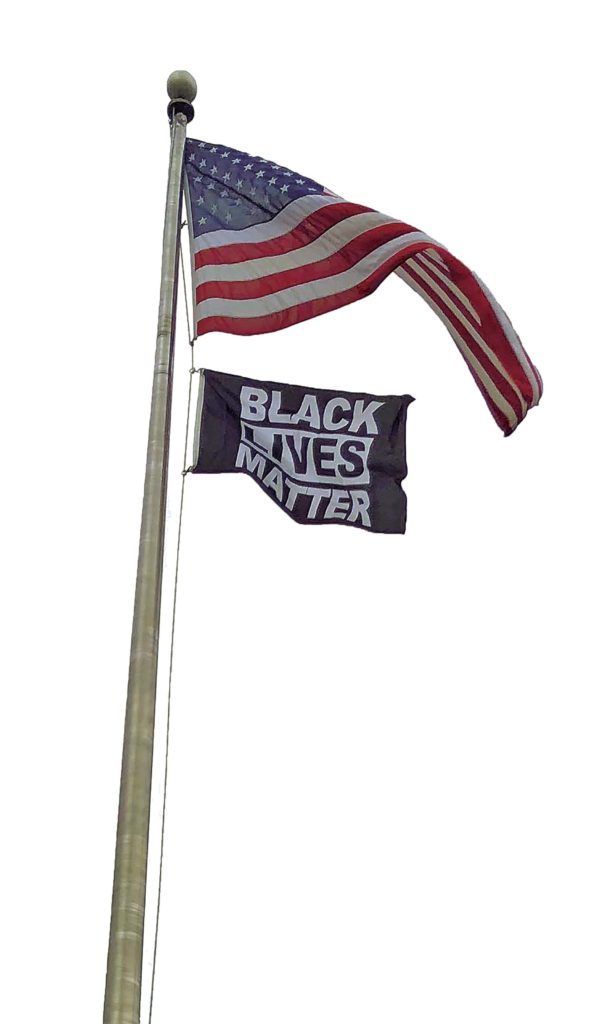 ALMOST TWO YEARS after floating their original request to fly the Black Lives Matter flag at Middlebury Union High School, students there will now be able to raise that banner.

MIDDLEBURY — Almost two years after floating their original request to fly the Black Lives Matter flag at Middlebury Union High School, students there will now be able to raise that banner.

After many months of impassioned debate interrupted at times by the COVID-19 pandemic, the Addison Central School District board on Monday approved a policy that will allow the flying — for a limited time — of banners other than just the U.S. and Vermont flags on the primary flagpole at the entrance of any ACSD school.

And the board made quick use of their new policy at the same meeting, unanimously endorsing the flying of the BLM flag on the MUHS flagpole through the end of the current school year.

It was a defining moment following a lengthy stalemate during which board members had found themselves divided into two camps: one in which some members asserted the primary flagpole at school should be reserved for governmental emblems, and the other with members arguing the flagpole is an important messaging hub that should be harnessed to project support of causes compatible with ACSD policy and core values — in this case, to draw attention to historically oppressed people.

“Sometimes, there are circumstances and events in our world that compel us to speak out,” board member Peter Conlon said, echoing a statement previously made by his ACSD colleague Mary Gill. “Like it or not, the flagpole has become that sort of place where a school board or a school district can make a statement when circumstances and events compel us.”

It should be noted the new policy requires a super-majority vote of the ACSD board — meaning at least 10 of the 13 members voting in favor — for a flag proposal to make it up a school flagpole.

It was MUHS’s Student Coalition On Human Rights (SCOHR) group that last year requested a Black Lives Matter flag be flown in front of the school. SCHOR member Ivy Doran said before Monday’s board meeting that her group had been considering other options for expressing their support for the BLM cause absent a flag policy.

Now SCOHR can follow through with a flag raising.

“We have been advocating for this issue for almost two years and we feel it is an important step in showing our support for the marginalized communities in our society,” Doran wrote in an email to the Independent. “The raising of the Black Lives Matter flag coincides with our school’s beliefs and core values as stated in (ACSD’s) mission statement ‘by providing diverse, challenging, and innovative learning opportunities’ and ‘encourage respect for diversity, kindness and generosity of spirit and understanding that other people, with their differences, can also be right.’”

The new flag policy is not only being hailed by students of color and peers who support their cause, buy also by others.

“If the board didn’t find a way to fly the BLM flag, I’d feel less safe as a member of the LGBTQ+ community, even though I’m white,” said student June Mason, an eighth-grader, who added, “white supremacy and homophobia/transphobia often go hand in hand.”

The few ACSD board members who opposed the new flag policy said they believed the primary flagpole at ACSD schools shouldn’t be used in support of other groups and causes. Opponents of the policy have suggested the BLM flag could instead be flown on a separate flagpole on school grounds, or that students could adorn the school campus with posters and banners emblematic of the causes they espouse.

“My first impression was that I was totally in favor of flying the flag in some place, because I supported all of that,” board member James “Chip” Malcolm said. “But putting the flag on the government flagpole — I have not been able to find compromise, in my own mind. I’ve struggled tremendously with it, because I want to see the BLM flag up, but I just don’t think it’s appropriate to fly it on the same pole at the U.S. or Vermont flags.”

Board member Suzanne Buck said she’d asked family, friends and students to share their thoughts on how the ACSD should approach its flag policy.

“In talking with everyone, no one has really helped me out of my conflict and my struggling,” she said. “I do support all individuals, whether they be of color or the LGBTQ community, and I understand why this flag is important. I’m still conflicted. I just don’t feel that the government flagpole is a place for anything other than the U.S. flag and the state flag.

“I would rather see the BLM flag anywhere but on that flagpole,” she concluded.

But a majority of ACSD board members urged approval of the new flag policy. Among them was student representative Narges Anzali, a native of Iran. She, like other board members, noted the MUHS flagpole is currently hosting the International Baccalaureate flag. While ACSD is affiliated with the IB program, its flag was never vetted prior to being run up the flagpole.

She borrowed from her own life experiences as an immigrant and as a Muslim to drive home her support for the new flag policy.

“I think a lot of hesitation to put this flag up is for political reasons,” Anzali said. “It is a case of something that has been politicized, so that makes it all the harder to put it up, to say that we support this. But I would urge you to think that frankly, everything I have done from the moment I was born in another country has been politicized. My life is political, and I have no choice in that. I think it shows part of our privilege that we have a choice in whether we get involved in this.”

Again deferring a decision on a flag policy would set a bad example, she said.

“Given the trends of history, I think maybe taking it forward is the right decision,” Anzali said. “It’s the best thing to do for our community. And yes, it invites debate and some people want to stay away from that, but if we keep ignoring it or we say, ‘there’s no place for those things on our government-designated spaces,’ then we’re just pushing the problem further away from us.”

Gill, chair of the ACSD Policy Committee, agreed it was time to act. The Policy Committee found that more than 20 Vermont school districts — including the neighboring Mount Abraham Unified School District — have elected to add other flags to their mix, such as the BLM banner.

“The majority of our constituents who have contacted us for the last four months are in support of us doing something like this,” she said. “I think if we take a stand that we’re not going to move this fight … what message is that going to send to the rest of the community and the rest of the state, that Middlebury can’t get behind this?”

The board ultimately did get behind both the policy and the flying of the BLM flag at MUHS. Members applauded their collective decision after both votes.