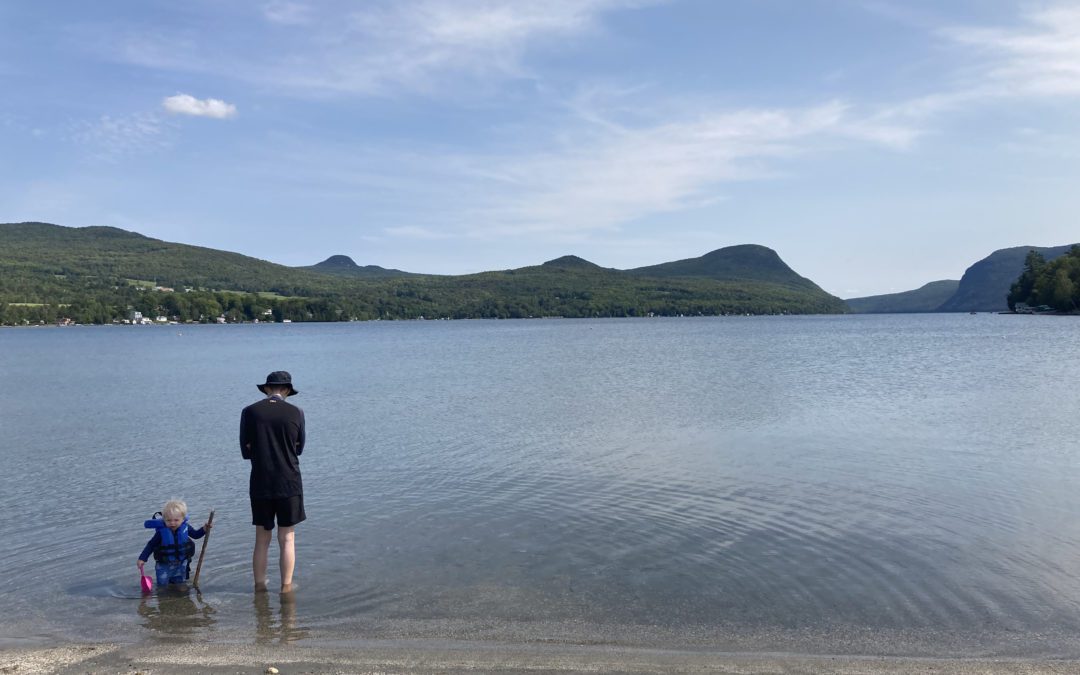 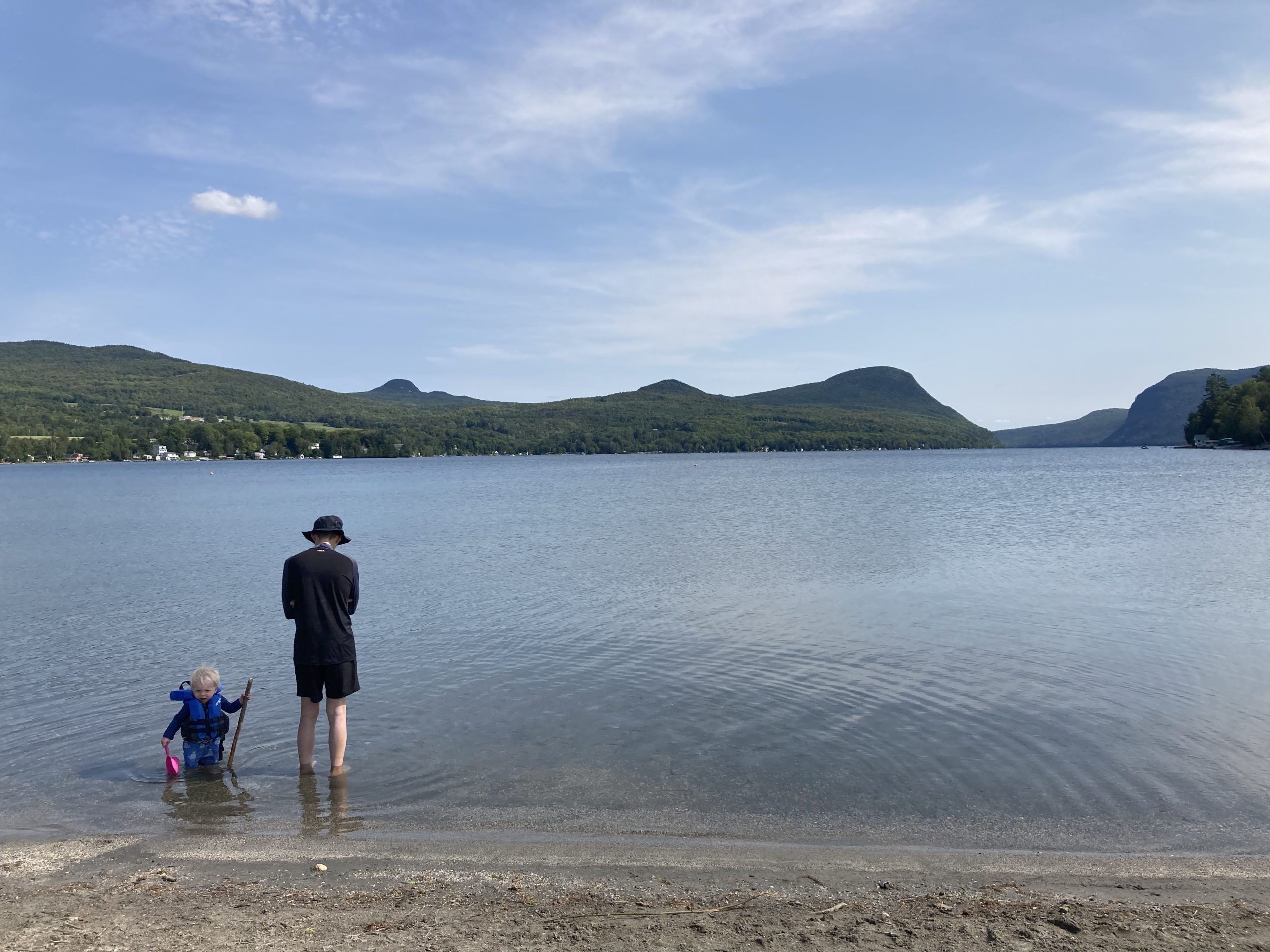 Last week, thanks to the generosity of my mother- and father-in-law who were visiting us from California, my husband and I had a weekend getaway.

It’s not quite as romantic as it sounds: Our 22-month-old son came along, too. Still, it was the first time in over three years that my husband and I had been away from home — and our four daughters — together. We headed to Vermont’s Northeast Kingdom, one of our favorite idyllic escapes. (For out-of-state friends who visit Addison County to “get away from it all,” yes there are places even more sleepy and remote, and the Northeast Kingdom, nestled between the Connecticut River and the Canadian border, is one of them.)

Our destination this time was new to us: Lake Willoughby, a glacial lake carved out between Mount Pisgah and Mount Hor. At over 320 feet deep in places, Lake Willoughby is the deepest lake entirely contained in Vermont. Known for its clarity, Willoughby was named the third best lake in New England by Yankee Magazine in 2010.

The 150-minute drive from our house to our weekend rental was a journey through Vermont’s unique blend of quiet and quirky beauty: rolling green horizon, turquoise blue sky, sparkling rivers that were equal parts water and rocks, alpine meadows dotted with grazing cows, roadside clumps of chicory, goldenrod, and Queen Anne’s Lace. The presence of humans was hinted at by widely spaced farmhouses, some in pristine condition and others in various states of disintegration. Doublewides often had an incongruous number of vehicles parked out front (“That’s either a large family gathering or a drug deal,” my husband quipped when I pointed out the third such case). Occasionally we’d pass through a town, always with a white clapboard General Store (“Groceries*Beer*Bait*Guns*Ammo*Ice Cream*Gifts”) and an auto body shop (“Moody’s Used Car’s and Part’s”).

Our rental house was a small, unassuming farmhouse a few minutes away from the north shore of Lake Willoughby in the town of Brownington (population 960). Inside, however, it had been decorated in “Hunting Lodge Kitsch”: wood paneled walls, exposed beams, carved bears and moose around every corner, and no light fixture without antlers. It was perfect. We checked in, changed into our swimsuits, and headed to Lake Willoughby’s tiny North Beach.

The view down the lake from North Beach was stunning: pristine water flanked by steep mountain cliffs. Perhaps because it has such steep shorelines, Lake Willoughby is much less developed than other lakes we’ve visited in Vermont, which may explain why there was plenty of space on the beach on a warm and sunny Friday afternoon in late August.

But those people were there.

I suspect that there are those people at just about every beach, so you probably know the type. There were five of them: father, mother, and three sons. They were loud and large. Despite the signs every couple of meters along the beach that declared it a dog-free zone — and a particularly emphatic warning at the beach’s entrance that went so far as to give the phone number of the local animal control officer — they had their dog with them. They were staying in a log cabin-ified cottage directly across the road from the beach; I know this because at regular intervals one of them would leave their bastion of folding chairs and walk across the road to retrieve another bottle or can or bag of chips. They’d generously decided to share their music playlist with everyone else on the beach: It blared from speakers within their house, exactly the songs you’d expect, from “Bad to the Bone” to “Hotel California.”

At one point, one of those people shouted, “Look, an eagle!” Then they all stopped and stared as a turkey vulture swooped low over their house.

I noticed that both cars parked in their driveway had New York license plates. Although I spent seven years of my own life in New York, I thought smugly, Of course; that explains everything.

Every fiber of my being wanted to judge those people.

But I’d recently heard a podcast interview with the author Malcolm Gladwell in which he said something that caught my attention: “[W]hen we analyze our own reasons for doing things, our own behavior, we are incredibly attentive to nuance and complexity….but when it comes to explaining other people’s behaviors, we tend to be very reductive….[W]e are perfectly capable of acknowledging the complexity of ourselves even as we deny it in our views of others.”

In other words, because I understand how complicated I am, I tend to judge my own actions kindly. But when it comes to others — to those people — I am much harsher because I reduce them to the face value of their behavior. I have read the entire book of myself, but I judge their story from the cover photo: They are crude and inconsiderate.

I decided to observe those people a little more closely, to see if I could discern the complexity of their story. And I noticed that their dog, a beautiful and mellow golden retriever who was not supposed to be on the beach, walked with a stiff limp and had what appeared to be a massive tumor on her back. I also noticed that one of their sons, probably in his late teens, seemed to have some sort of disability, perhaps something along the autism spectrum: He spent the entire time we were on the beach — two hours — sitting by the road bouncing a tennis ball with intense focus.

When my husband, my son and I packed up to leave the beach, those people were still walking back and forth across the road, clutching their beverages, their music blasting (I think it was the Eagles’ “Take it Easy”). But now I was silently cheering for them. They no longer seemed rude; instead, they struck me as warriors against the darkness.

Yes, Those People, I thought to myself, life can be so painful, so hard. You know this all too well, but still you crank up your music, you enjoy a cold beer on a warm day, you splash in the cool water of a glacial lake, and you see an eagle in every turkey vulture. Keep up the good fight, my friends.

Sometimes it just takes a little noticing to turn judgment into benediction.