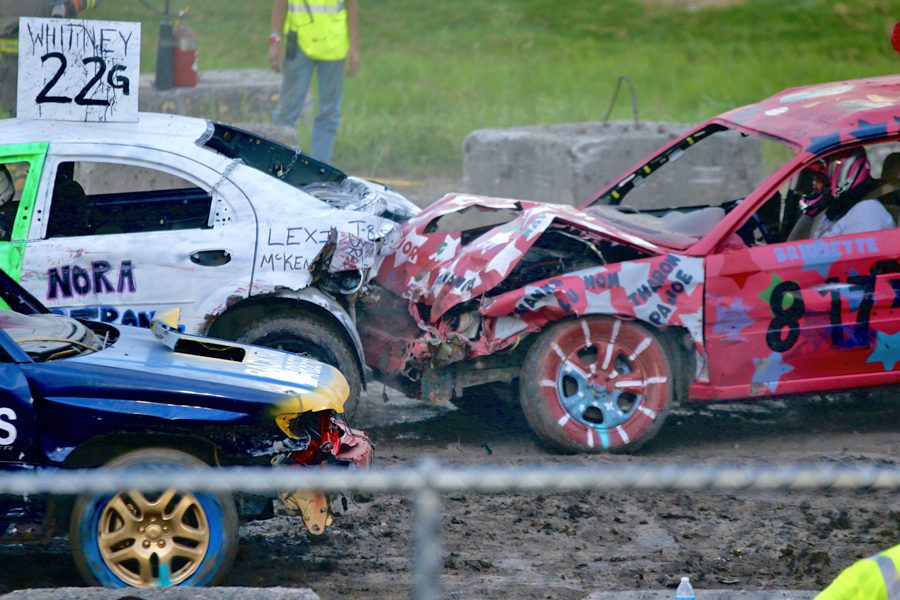 NEW HAVEN — “You always get told not to smash up a car all your life,” said New Haven resident Zachary Lavoie, 21. “(And then you) turn up and smash a car and do what you were meant not to do.”

Heading into the competition — where helmeted drivers smash into each other’s vehicles until a given proportion of the competing cars cannot move — Lavoie was proud of his car, both the physical capabilities and the decorations he painted on the body.

“It’s an ’06 Chevy Vale with a five-speed transmission,” he said. “A four-cylinder engine makes around 102 horses or something like that. Got names of my friends around my car. Various phrases. The front of my hood says: ‘Send it.’”

Lavoie, who got eliminated early during the last Field Days Demolition Derby in 2019, was hopeful that this could be the year he improves his record.

“As long as I’m not the first out, I’m happy,” Lavoie said. “Getting top six or three I’d still be happy.”

Although he hadn’t practiced extensively for the derby, he had practiced a little bit.

“Driving around in a little field is pretty much it,” he said.

Twenty-one-year-old Benson resident Adam Stewart approached the derby with a sense of fun, sporting a giant stuffed dog in his passenger seat as he prepared for mayhem.

“A couple of years ago I had a bear that I was given and someone told me to run with it in your demolition car and it kind of stuck,” Stewart said. “And back actually in (the) Rutland Fair I competed with the bear in my car. When I got out, a little girl in the stand hollered, ‘I like the bear.’ And I handed her the bear. (But) I replaced (the bear) last year, and the dog he’s around for the line.

Painted on the side of Stewart’s car is also the number of a suicide hotline and messages about suicide awareness. Stewart told the Independent that after two people important to him took their own lives, raising awareness about suicide prevention has been an important issue for him.

“It’s a suicide awareness car,” Stewart said. “I brought the suicide awareness theme back in 2019. The first car I ever had it on was a mini-van and I ended up finishing up second in that. When suicide awareness comes up it’s a huge thing. I’ve got a suicide hotline number on the car. The hood is a memorial to both of my friends and people I know who’ve lost to suicide.”

Stewart did not bother to practice for the derby this year. He said there’s really no point.

“There’s no good way to practice,” Stewart said. “You’ve got a different car, you’ve got different people next to you. Some hits are gonna be hard, some aren’t gonna be as hard. There’s no way to practice for demolition. You just get out here and don’t let up. Give it all the car’s got.”

Heading into the race, she said that she’s most excited about “the adrenaline” of the Demolition Derby. In her pursuit of adrenaline, Marsden said that she wasn’t too worried about getting hit by the competitions’ other cars.

“You get hit,” she said. “Take it, brace yourself. You get a little sore.”

Like parents supervising children at play, about a dozen members of the Vergennes Fire Department surrounded the Demolition Derby arena during the competition, fire hoses in hand.

After the singing of the national anthem, the competition promptly began.

The competition kicked off with the four-cylinder qualifiers. There were several notable episodes in this segment. In the second qualifier, driver Kevin Desjardin  — whose car had the message “Trump 2024” written on it — demolished Cameron Messer’s car with a giant, momentum-filled hit. In the same race, Brian Blake’s vehicle, meanwhile, started seriously pouring smoke, although Blake made it to the finals.

And the 4-cylinder finals were spectacular. Gary Grant’s car, which read “FREEDOM USA,” performed impressively, taking out some of the earlier vehicles, including Matt Merchant’s. But he could not defeat Sumner, who struck Grant in the side, earning Sumner the gold.

The six-cylinder feature was, in many ways, the most competitive race of the night. After most of the 15 initial cars died, the race became a battle of wits between drivers Grant, Kenny Marcel (driving a car named “DUI GUY”), AJ Sumner and Ashlie Gevry. Eventually, Gevry outplayed Grant and Marcel, at which point the battle became a one-on-one.

Sumner’s vehicle pursued Gevry’s, constantly smashing it into the huge concrete blocks that encircled the arena, sending sparks flying into the summer night. But all of a sudden Gevry’s car sprang into action and slammed into its nemesis, whose hood was promptly engulfed in a small fire after the crash. As Vergennes firefighter quickly hosed out the sizzling front of Sumner’s vehicle, Gevry emerged from her car victorious, a female victor in a demolition derby often dominated by men.

The mini-van feature kicked off with Eddie Shackett receiving blows from Marsden that eventually ended his chances. Several vans caught fire after a group collision midway through the event, where the track went into a smoky limbo that was dealt with by the firefighters. Tajah Marsden and Ethan Gevry were runner-ups to Dustin Tierny, who emerged the victor after smashing Gevry’s vehicle.