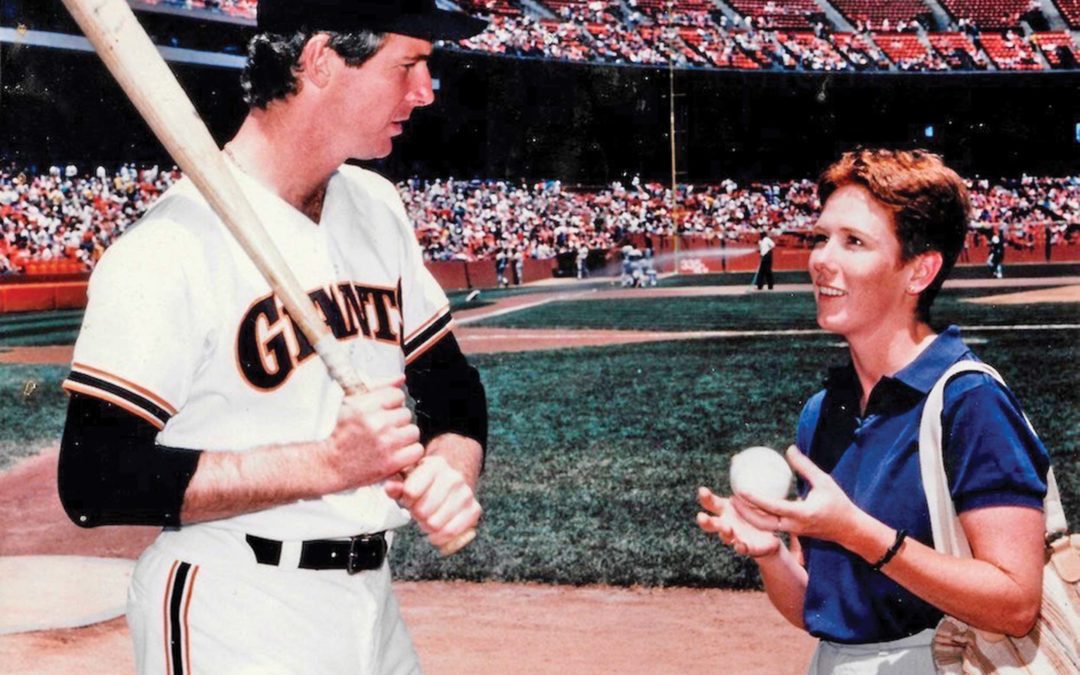 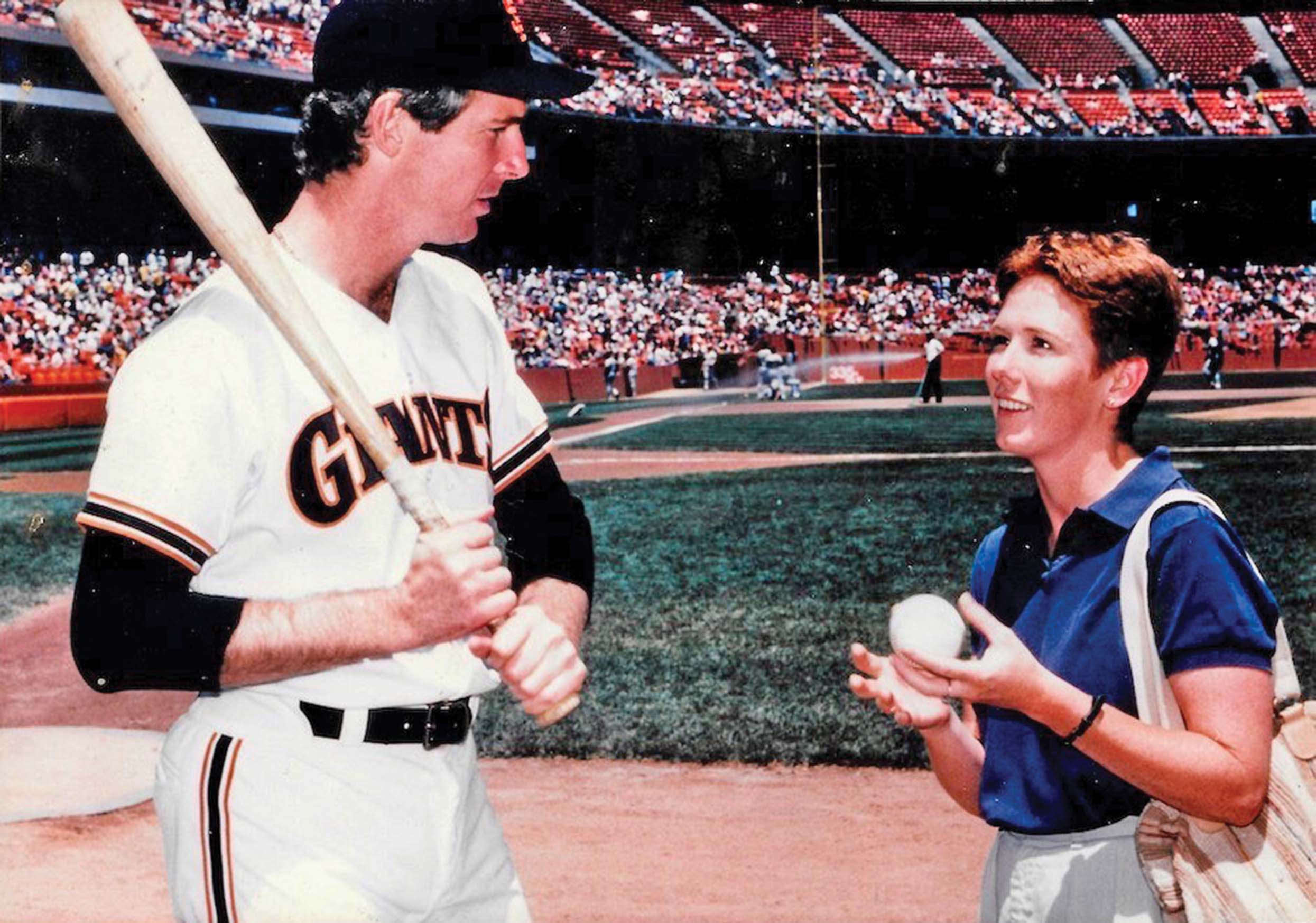 MIDDLEBURY COLLEGE PROFESSOR of English Brett Millier worked for three summers for the San Francisco Giants prior to coming to Middlebury. Here she is in 1984 with one of her favorite players, pitcher Mike Krukow. “Kruk” has been a Giants broadcaster for 27 years.

As she was exploring the campus on her very first day at Middlebury College in August 1986, young professor Brett Millier encountered Frank Kelley, the director of residential life, who engaged her in lively conversation as was his wont.

Frank learned that Prof. Millier was at Middlebury to teach American literature, so he encouraged her to lead a discussion of the book all first-years were asked to read and discuss during Orientation, Carson McCullers’s “The Heart is a Lonely Hunter.”

He suggested she come with him to the dean of students office in Old Chapel to meet with the associate dean who was organizing Orientation. Not only did the dean get her to agree to lead a discussion section, but, taking advantage of her inexperience at Middlebury, he convinced her to address the whole class on the text.

The dean also learned that she was a baseball fan, a serious baseball fan. In fact, she had worked for three summers — her grad school job — for the San Francisco Giants, running the message board in Candlestick Park for more than 200 games, from 1984-86.

Both the Sporting News and the San Francisco Examiner ran stories about this interloper in the Giants press box. The headline in the Examiner was “The Brain Behind the Scoreboard.”

As it turns out, the dean was a baseball fan too!

Four years later, she and that dean (that would be me!) were married, and the Giants and the Red Sox, his team (my team), were aligned for good.

Baseball was also in Professor Millier’s blood: her great-grandfather Barton Emery “Dusty” Rhoads played eight years of major league baseball (1902-09), winning 22 games in 1906 and pitching a no-hitter against the Red Sox in 1907. She was nine when Dusty died in 1967 in Barstow, Calif., her ancestral home, and she remembers him keenly.

The first few years we were married we lived in Whiting, and had no cable or satellite, so no baseball on TV (though I had Joe Castiglione on the radio). We often went on trysts to motels in Rutland, so we could watch the Red Sox game first and then the Giants from the Coast on a large screen.

I suspect that few at the motel thought this couple, an old man in his 40s and young woman in her 30s were actually married and there at the motel to watch baseball on TV, but it was true.

In Brett’s first two years with the Giants, the team was bad, losing 96 games in ’84 and 100 in ’85, but they were truly getting better when she left town in ’86 (83 wins-79 losses) under manager Roger Craig with Will Clark, Chili Davis, and Matt Williams in the line-up.

Her first year in Middlebury, 1986, was of course the nadir for Red Sox fans as we watched in horror as our club snatched defeat from the jaws of victory in that awful sixth game of the World Series with the Mets.

Whenever the Giants came to Montreal to play the Expos (before they decamped for Washington in 2004), Brett would call her front office pals who would give us great seats for the games. We had a number of baseball adventures à moh ree-ahl, some of which have been recounted in this space over the years.

So here we are, 30 years later, still rooting hard for our teams. Life has been good this summer in our house. We no longer have to go to motels in Rutland to watch our teams, one after the other. For much of the first half of the season, the Giants and the Red Sox were the best teams in the game.

The Red Sox last year, in the pandemic-shortened season, were terrible, their 24 wins and 36 losses the worst in their division, third worst in the American League. Most projections had the Sox in 2021 finishing behind the Rays, Yanks, and Jays in the AL East, no better than a .500 team.

The Giants were not much better in 2020 (29-31) and seemed hopelessly stuck behind the Dodgers, last year’s champs and by consensus MLB’s best team, and the emerging San Diego Padres who were spending lavishly to be competitive.

Yet, mirabile dictu, at the all-star break this year, the Red Sox had the most wins in the AL as did the Giants in the NL, both greatly exceeding expectations, playing exciting, opportunistic baseball.

Yet, a half-season is only a half-season: these guys play every day — and all Red Sox fans of a certain age remember 1978 when the Sox held a 14-game lead on the Yanks in mid-July only to succumb to Bucky “Bleeping” Dent and his mates in a play-off game.

As I write this, the Red Sox have lost five of their last six and have relinquished first place to Tampa Bay. The Giants, however, are sustaining their excellence and still have the best record in baseball.

The Red Sox traded for Kyle Schwarber, a streaky left-handed hitter, who appears, however, to be a player without a position.

In the West, the Dodgers won the trade deadline sweepstakes by adding Hall of Fame-bound pitcher Max Scherzer and terrific young infielder Trea Turner. The Giants countered by picking up former National League MVP Kris Bryant from the Cubs. Bryant hit a homer in his first game (and is already being called “Kris Giant”).

You can be sure in our house the games will be on at bedtime for the rest of the season. We hope for sweet dreams.