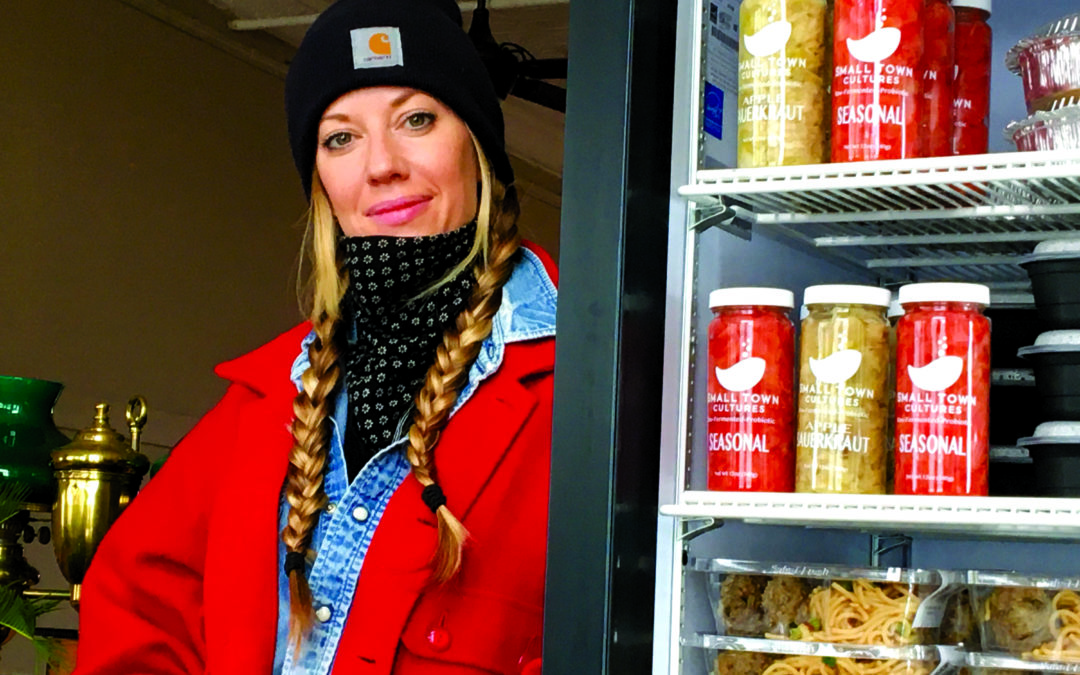 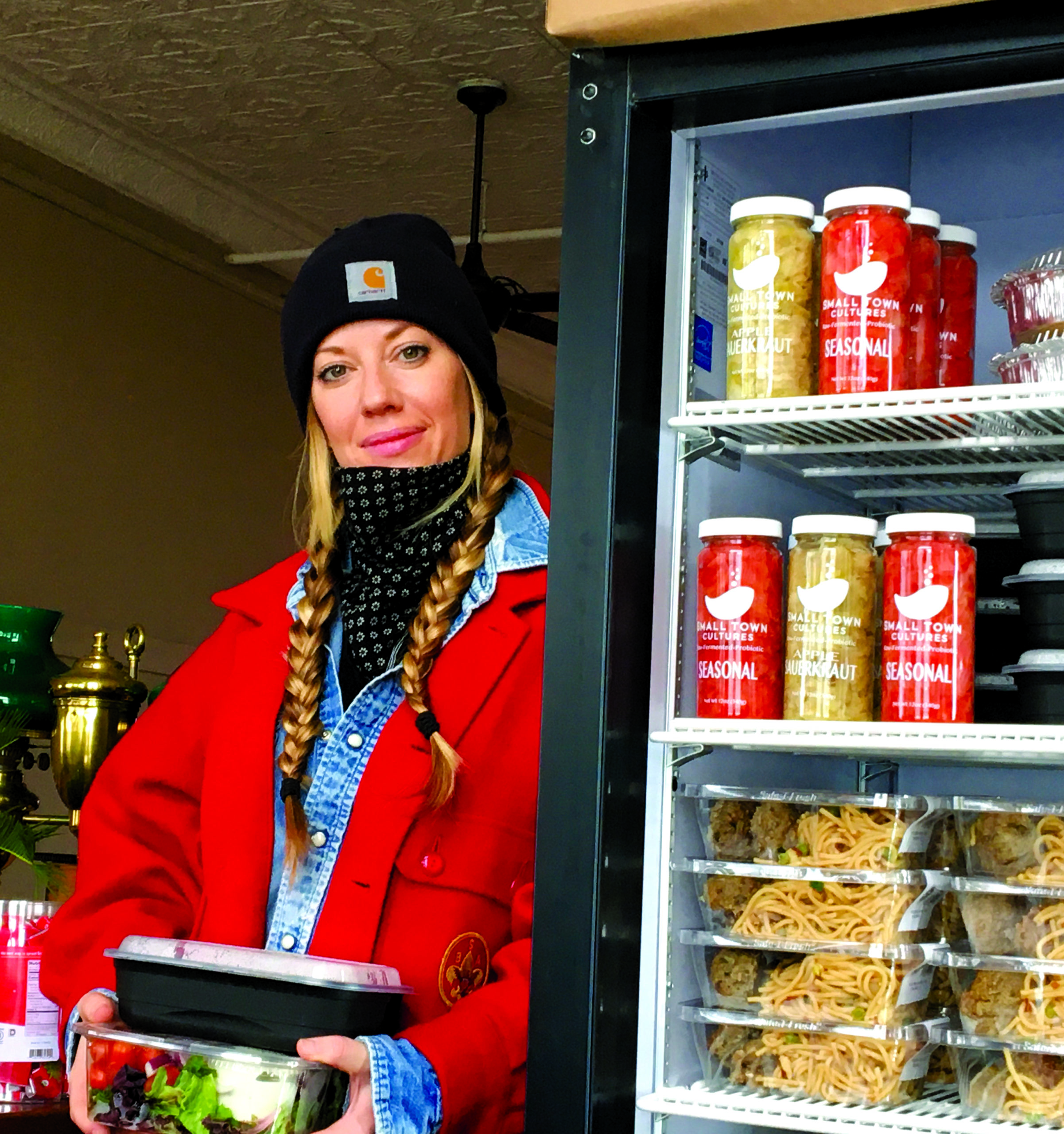 BETHANIE FARRELL AT The Giving Fridge in Middlebury.

The COVID-19 pandemic and the accompanying economic dislocations made the problems that some Vermonters have with food insecurity all to obvious. Thankfully, a variety of local efforts have sprung up in the past year to address food insecurity in Addison County.

Central to many of the efforts has been a reliance to some degree on local foods generated by local producers, and in many cases provided by local restaurants. Spreading out the efforts has not only kept people from experiencing hunger, but also kept local food producers and purveyors in business.

Food programs like Vermont Everybody Eats have been a key response to food insecurity. A year into the pandemic Everybody Eats is still running strong in Addison County, with hubs in Vergennes and Middlebury that between them distribute around 1,600 meals a week to residents in need because of the COVID-19. Statewide, Everybody Eats in late April marked the milestone of having served 1 million meals in Vermont.

While nonprofits and volunteers do a lot of the heavy lifting in the two Everybody Eats branches in Addison County, the program also boosts several local restaurants because federal funds pay them to prepare the meals. Area food producers also benefit because the program requires locally sourced ingredients in meal preparation.

The money for Vermont Everybody Eats comes from the 2020 federal Coronavirus Relief Fund and will sustain the program at least through June.

That’s according to volunteers Sue Hameline, who works with overseeing entity the Boys & Girls Club of Greater Vergennes in that area, and Dottie Neuberger, who helps out the Congregational Church of Middlebury and the Charter House Coalition in the county’s shire town.

Around the state, theirs and similar efforts are funded by a grant given by the Vermont Agency of Commerce and Community Development to Southeastern Vermont Community Action (SEVCA), which oversees the statewide Everybody Eats program.

SEVCA works with the nonprofits that administer the programs locally. The nonprofits in Vergennes and Middlebury locate and screen those in need, find cooperating restaurants to produce meals, and typically provide volunteer drivers or pickup sites or both. Everybody Eats dishes out more than 30,000 meals weekly statewide.

Hameline said the northern Addison County effort has had twin Vergennes eateries Bar Antidote and Hired Hand Brewery on board since mid-2020. Three Squares Café closed for the winter and dropped out, but Mary’s Restaurant in Bristol and Live Young Kitchen Market and Café in Vergennes were on board in 2021, as well.

Mary’s makes between 200 and 250 meals each weekend for individuals to pick up, while Live Young Kitchen contributes up to 10 vegetarian entrees on weekdays to the effort’s regional delivery route. Hameline said they run meals to folks in Monkton, Panton, Ferrisburgh, Vergennes, Addison and Waltham.

The daily totals range up to 170 meals, plus another 150 on Fridays to Starksboro’s new community project. Hameline said it all adds up to the regional program offering around 1,200 meals a week, and sometimes more.

In Middlebury, volunteer program coordinator Dottie Neuberger said funding has supported the Charter House’s longstanding Friday night meals, while Everybody Eats delivers food to Middlebury-area residents and also to those in the Commons housing development in need.

The Middlebury effort delivers around 290 meals once a week on top of the weekly suppers.

Jessica’s Restaurant at the Swift House continues to prepare the main courses for the program, as it has all along. Back in the fall and early winter Jessica’s sourced up to 60% of its ingredients locally, with main providers including Golden Russet Farm in Shoreham and as well as Duclos & Thompson Farm.

Neuberger said Jessica’s has been a stalwart partner.

“They’ve done a great job for us,” Neuberger said.

Last year when Bethanie Farrell learned of the growing need for food for Addison County residents, some of whom had lost jobs due to the pandemic, she knew she wanted to become involved. She hit on the idea of creating a community “Giving Fridge.”

It’s a concept similar to the Everyone Eats program, with the same goal of using funds to buy food from local farmers that is then prepared by local restaurants and delivered to folks in need. The resources not only help the hungry, but restaurants owners and food producers who’ve also suffered through COVID’s financial toll.

Farrell found a lot of support for the Giving Fridge. Word of mouth started yielding donations, including bunches of plants, flowers, Panton-based Ridgeline Apiaries honey and even antiques — items she can sell to raise money for Giving Fridge meals that are prepared by local restaurants.

“Every donation provided more reinforcement that I should be doing this,” she said.

It all came together in December 2020 when the owner of the Battell Block agreed to allow the Giving Fridge to temporarily occupy the former Carol’s Hungry Mind Café space on Merchants Row. This became her base, where she would receive and store meals ready for distribution. She would also sell donated flowers under the moniker “Plantopia,” which helps fund the food effort.

The Merchants Row location is convenient to the Addison County Transit Resources bus route, and folks can pick up meals on Sundays and Mondays, from 2-4 p.m.

People can reserve a meal, purchase Plantopia wares, and/or make a financial donation through the Giving Fridge website: careofvt.com. The website illustrates how the purchase of one large plant for $60 can subsidize four meals, and a $15 plant can pay for one meal. Or, if you don’t need a plant, you can purchase one meal for $10, five meals for $50, etc.

Farrell officially launched the Giving Fridge on Dec. 23 and provided 1,000 meals by the end of January.

Some of the meals have been going to organizations like John Graham Housing & Services and the Charter House Coalition, which care for the chronically homeless and under-fed. Farrell also gets referrals from various nonprofits and gets visits from random individuals needing meals, and from people who want to buy some for a neighbor.

She has mixed feelings about how the meals are flying out of the fridge.

And these are good meals with excellent local ingredients, prepared by local chefs. Each meal includes a salad, entrée and dessert. Meals have included cottage pie from the Co-op and a chicken-mash-and-asparagus dish from Two Brothers. The American Flatbread pies have also been a big hit. Sabai Sabai has provided delicious stir-fry offerings.

The Fridge has been serving food to hungry people from several Addison County communities, including Middlebury, Salisbury, Vergennes and Bristol. And they’re grateful.

“Some people who are getting the meals, when they come back a second time, they’ll bring $10 and say, ‘I really want to be able to give this for someone else,’ or ‘When I get enough money, I’ll pay you back’ — And they do,” Farrell said.

By April, the Giving Fridge had been such a success that the charity announced that it had signed a two-year lease to move into the former home of The Diner at 66 Merchants Row, a space that will allow Farrell to ramp up her efforts to feed the hungry and launch nutrition programming.

In its first three months of operation, the Giving Fridge dispensed more than 2,000 meals and created approximately $20,000 in revenue for local businesses.

At her new digs, Farrell believes she can make The Giving Fridge more than a place to buy a handful of products and receive a nice meal. Her plans include:

•  Educational and entertainment programs, as well as branching out into prepared meals for folks living with chronic diseases.

“What’s really important to me is providing healthy, prepared (food) options for people,” she said.

Up in the northeast part of the county, the Starksboro Food Share Program is an important effort to eradicate food insecurity.

Vermont is a great example of the resurgence in local food, with farmers markets and small, diversified farms emerging across the landscape, said Pete Antos-Ketcham, coordinator of the Starksboro Food Share Program. But because it’s not heavily subsidized like the industrial food production and because it’s produced by people making a living, local food costs more, he pointed out.

Still, “good local organic produce should be available to everyone, regardless of their economic circumstances,” Antos-Ketcham said.

The Starksboro Food Share Program, which was created in 2015, is hosted by the Starksboro First Baptist Church on Sunday afternoons from 2:30 to 3 p.m.

“People can come get a box of food,” Antos-Ketcham said. “We try to focus on fresh food.”

The program typically gives out 30-40 food boxes per week to anyone who shows up. The majority of people tend to be from Starksboro and surrounding towns, he said.

Offerings include donations from the Middlebury Natural Foods Co-op and Trader Joe’s in South Burlington. In the summertime, the program grows much of its food in a large plot of the town’s community garden.

The Starksboro Food Share program is also a distribution hub for Everyone Eats, which is held by signup at the First Baptist Church on Friday afternoons from 3:30 to 4:30 p.m.

During the pandemic, the number of people availing themselves of these programs has increased, Antos-Ketcham said.

Yet, despite this increased demand, the program made significant strides this past year, installing a Little Food Pantry at the First Baptist Church, building a greenhouse and planning for a second. This summer it will add 2,900 square feet to the community garden.

“The pandemic has highlighted the fragility of our food systems,” Antos-Ketcham said. “I’m hoping this will serve as a wakeup call. Not too long ago we produced our own food and that provided food security. We need to reinvest in our local food systems.”