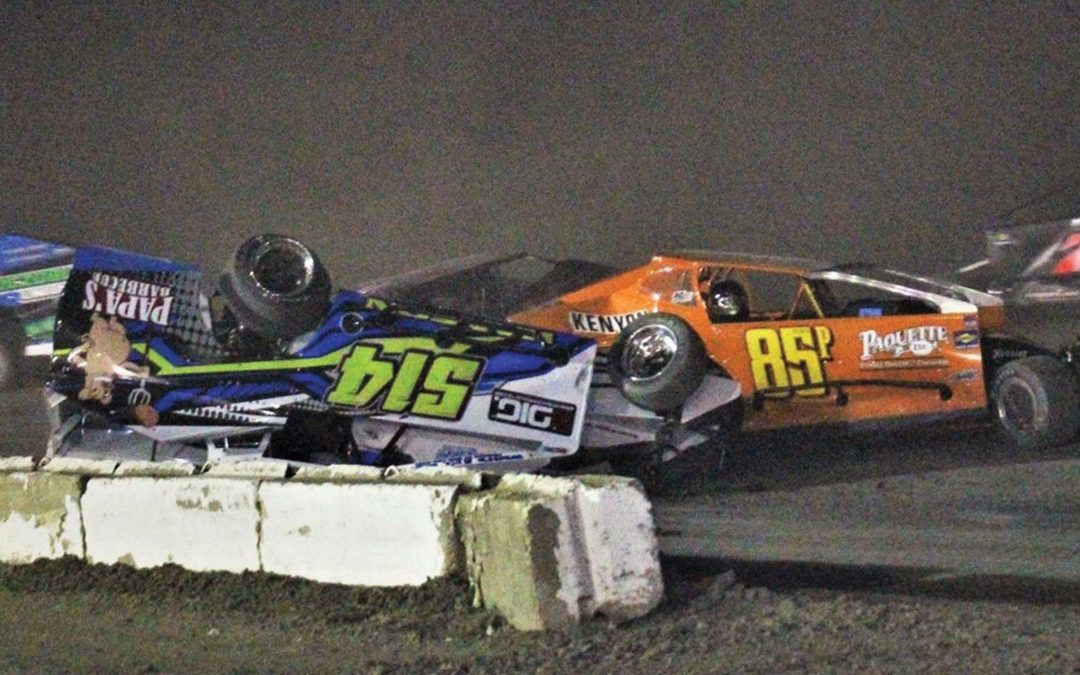 JAMES HANSON OF Orwell (#514) walked away uninjured when his car flipped on lap 7 of the Sportsman Modified feature race at Devil’s Bowl Saturday evening. Salisbury driver Mike Palmer (#85P) was also caught up in the crash. Both managed to finish the race.

WEST HAVEN — A New York veteran who had not won at Devil’s Bowl since 1996 prevailed in Saturday’s Sportsman Modified main event at the dirt track, while Addison County drivers Chris Sumner, Ray Hanson and Eric Leno picked up victories in undercard races.

Another local driver, James Hanson, was one of two racers who walked away from rollover accidents on Saturday.

Reckner then held off Bristol’s Josh Masterson for the win. The runner-up showing was the best result of Masterson’s career on dirt; he was previously a two-time Late Model champion on the former Devil’s Bowl asphalt track.

Middlebury’s Justin Comes was fourth, and Brandon’s Joey Scarborough took seventh. James Hanson was uninjured in a rollover on lap 7.

Scotia, N.Y.’s Joe Venditti, 14, scored his first Devil’s Bowl win in the 25-lap race in the Limited Sportsman division. In his third start at the track, Venditti needed only four laps to make his way from sixth starting position to the lead.

Middlebury’s Austin Comes fell one position short of back-to-back wins as the runner-up, and Bridport’s Troy Audet was fifth.

West Rutland’s Andrew FitzGerald nailed down his second Super Stock win of the season in a 20-lap race. Addison rookie Chuck Bradford finished fifth. Driver Brett Wood walked away unhurt from a hit into the Turn 3 wall that left his car upside-down.

Ripton’s Chris Sumner was the runaway winner of the 20-lap Mini Stock feature. Sumner scrambled from ninth start position into the lead in just three laps and never looked back.

Orwell’s Ray Hanson took his second win of the young season in the 15-lap feature in the 500cc Mini Sprint division. Hanson was dogged by runner-up Austin Chaves for much of the race, with Kamden Duffy and Monkton’s Kaidin White in tow; White finished fourth.

Whiting’s Eric Leno won a competitive 50-lap Enduro Series races, running to his first-ever win in the series opener. Leno started 36th on the 40-car field and dodged wrecks and spun cars on his way through heavy traffic in the survival-of-the-fittest race.

Eddie Bruno, Cagney Hamblett and Rocky Francis took turns leading the early laps before a crash took them all out of contention.

Brent Wilbur, Matt Wade and Leno snuck by the pileup at lap 17 to begin an entertaining fight for the win, with each leading laps. Leno took over at lap 38 and was out front for the rest of the race. Wade beat Wilbur by two feet for second place. Jason Vezina finished fourth as the last driver on the lead lap, and Ryan Benoit was fifth.

The winners and local finishers in each race were: