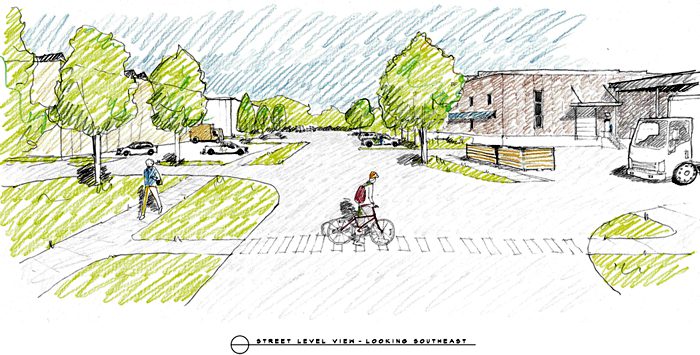 Bristol is basically an incubator town. But after a company outgrows 10,000 square feet, where do they go? Not Bristol. There’s nowhere for them to go.
— Kevin Harper

BRISTOL — By Kevin Harper’s reckoning, Bristol has lost a lot of good jobs because there’s nowhere in town for businesses to grow beyond a certain size.
In 2019, Harper reached out to a number of companies that had started out in Bristol — some in the Bristol Works business complex he co-owns — but then outgrew the town and moved on: Aqua Vitea, Autumn Harp, Bee’s Wrap, Danforth Pewter, NRG, Silver Maple Construction, Vermont Coffee Company.
Collectively, Harper determined at the time, they employed more than 500 people with good paying jobs and benefits — and all had grown after they left Bristol.
“Bristol is basically an incubator town,” Harper told the Independent. “But after a company outgrows 10,000 square feet, where do they go? Not Bristol. There’s nowhere for them to go.”
Until now.
After a nearly 20-year wait, Stoney Hill Properties (SHP), a partnership between Harper and renewable energy entrepreneur David Blittersdorf, will likely break ground this summer on a 9.6-acre business park and welcome its first business next year.

HUNDREDS OF JOBS
The business park will be located just off West Street, behind the fire station and adjacent to a forthcoming affordable housing project (see story on Page 1A).
The site will consist of three light industrial or office buildings totaling as much as 71,000 square feet. A fourth lot will be reserved for shared infrastructure.
“The commercial development can support 300 employees,” wrote the Addison County Economic Development Corporation (ACEDC) in a recent memo to the Vermont Agency of Commerce and Community Development. “Based on surrounding economic activity, SHP estimates that this development will create an estimated 200+ Full Time Equivalent (FTE) jobs.”
The latest site plan, reviewed last week by the Bristol Development Review Board (DRB), includes the following specifications:
•  Building A, at 25,640 square feet, will be constructed first, for light industrial use.
•  Building B has not been designed yet, but could be built to suit, up to 21,600 square feet.
•  Building C also awaits the design process, but could be built up to 23,760 square feet.
•  The northeastern end of a long, narrow Lot D, which runs along the southwestern edge of the site, will contain all the infrastructure for the site’s waste- and stormwater discharges and will be used specifically for utilities that the three building lots will pay for at a proportional rate.
•  The southwestern end of Lot D contains an area that must be protected because of its archaeological significance. In 2017, the Northeast Archaeology Research Center recovered Native American artifacts from 41 of 345 test pits, including an arrowhead dated from approximately 5,500-4,000 B.C.
•  The buildings themselves will be a dark red color with green doors and trim.
•  With rooftop solar, super insulation and energy efficiency built in, Building A will have the potential to be a net exporter of energy.
•  The septic disposal field area for the entire campus has a capacity of 4,800 gallons per day, which translates into a maximum of 320 employees, assuming traditional domestic sewage.
•  The complex will have 152 parking spaces available at full build-out, and will include three solar charging stations for up to six electric vehicles.

‘ANCHOR TENANT’
Harper and Blittersdorf have worked together for several years. They’re partners in the Bristol Works business complex, which consists of 45,000 square feet of building space on 6.5 acres, and they teamed up several years ago for the Bristol Firehouse project.
Stoney Hill construction of Building A, along with necessary site infrastructure, could begin late this summer, welcoming its first business — Blittersdorf’s AllEarth Renewables — in July 2022.
Founded in 2008, AllEarth Renewables makes solar trackers and other renewable energy components. The company currently occupies roughly 45,000 square feet in Williston. The pandemic put a serious dent in its business, but once it completes the move to Bristol, it aims to eventually employ 40 to 50 workers, some remotely, Blittersdorf told the Independent.
For Blittersdorf, who founded NRG Systems in 1982 in a spare bedroom and woodshed on North Street, moving his current business to Stoney Hill feels like a homecoming (See story on this page).
“I do feel partial to Bristol because it’s where I started,” Blittersdorf said. “I remember biking down to Main Street to make copies of my (wind turbine component) manuals at 10 cents a page. There was a hardware store and a bank and it was a nice place to live. I’m looking forward to getting back to supporting a small town.”
Building A will be owned by AllEarth Renewables, but it’s just as likely that Buildings B and C will be rented from Stoney Hill, Harper told the DRB last week.
Stoney Hill has interest from a possible second tenant, a wood products business, according to the ACEDC.
Harper didn’t sound too concerned about finding tenants.
“Sometimes it takes the first building to go up, and the road and the infrastructure — stuff people can see — to draw more interest,” Harper told the Independent. “There’s no shortage of businesses popping up.”
Or of businesses looking to grow.
One of Harper’s other businesses, Bristol Bakery & Cafe Wholesale, which produces baked goods for private labels and emerging brands and whose annual sales have surpassed $1 million, has reached the limits of its space at Bristol Works.
“We can’t go forward with the Bakery in the Bristol Works space,” Harper said. “We might need to move across town.”
Stoney Hill Properties submitted its Act 250 application last month and does not expect any hiccups.
Jamie Simpson, project engineer at Green Mountain Engineering, shared the plans with Act 250 District Coordinator Josh Donabedian and discussed them during a Zoom call, he told the DRB last week.
“His opinion was that this looks fantastic and that he does not foresee any major complications or difficulties with this application,” Simpson said. “His comment was literally, ‘Applications like these, when they come to us, are like dreams come true for the district coordinators. They make our jobs a lot easier.’ So we anticipate a quick turnaround.”

FUNDING
In 2019 the project, in partnership with the town of Bristol, received a $500,000 matching grant from the Northern Border Regional Commission (NRBC), a program originally designed to help fund projects in northern Vermont counties but which, thanks to U.S. Sen. Patrick Leahy, D-Vt., has now been expanded statewide.
The NRBC grant will help pay for the public infrastructure needed for the business park, such as roads and water/sewer, which Harper estimated will cost $1.1 million-$1.3 million.
It was ACEDC Executive Director Fred Kenney who suggested Stoney Hill apply for the grant, and he’s working with Harper and Blittersdorf to find more sources of funding.
“More grants means less financing, which means lower rent for businesses and residents,” Kenney said.
When the Agency of Commerce asked individual counties for a list of priority projects that could benefit from the $66 million in American Rescue Plan Act (ARPA) funding Gov. Phil Scott has proposed for direct capital investment in businesses over the next three years, Kenney submitted a sample list of Addison County projects. The list included Stoney Hill and the expansion of two other county businesses — Vermont Livestock Slaughter & Processing in Ferrisburgh and the Vermont Food Collaborative in New Haven.
The ACEDC and Addison County Regional Planning Commission keep a running list of such projects, Kenney said, so the sample list was “by no means exhaustive.”
“A lot of businesses are looking to expand,” Kenney said. “We’re working with eight businesses in Addison County that are looking to grow and we’re trying to connect them to programs.”
In April, the Agency of Commerce released a memo detailing 40 select projects around the state that were collectively in need of $307 million, so competition for Gov. Scott’s $22 million a year (or as it now stands in the Legislature, $11 million) will be intense.

TOO EXPENSIVE
Without such funding, however, developing projects such as the Stoney Hill business park would be next to impossible, Harper said.
“It’s insane how much it takes to put up a building when you’re starting with a piece of dirt,” he said. “There’s $45,000 for archaeologists, $25,000 for the Act 250 process. Divide site infrastructure of $1.2-$1.3 million into three lots, that’s $400,000 per lot. Who’s going to pay that for a two-acre lot? And that’s before there’s even a building.”
Harper pointed out that the Stoney Hill project was 20 years in the making.
“You have to work at this for decades and then live long enough to see the return,” he said. “The next generation of entrepreneurs needs to know that this takes a lot of time and community effort.”
Stoney Hill has also been a priority for the town of Bristol.
“Bristol has a long history of incubating successful businesses until they grow to a certain point and need to leave because there was no place in Bristol to expand to,” said Town Administrator Valerie Capels. “This much-anticipated project will bring jobs, opportunities for business retention and expansion, and new housing to Bristol in an area that is walkable to the downtown and civic activities.”

TRAIL NETWORK
Construction of the business park will provide visible context for the “Business Park Loop” of the Bristol Trail Network (BTN), which was constructed over the past few years.
The new complex will require a minor relocation of a small segment of that trail, but that shouldn’t be a problem, said BTN coordinator Porter Knight.
“When the Bristol Trail Network went in it was with the understanding it would make adjustments based on the footprint of the buildings,” Knight said. “This is no problem at all. In fact, we’re incredibly grateful to Kevin as a landowner and developer — he allowed us to put the trail in before construction of the business park because he didn’t want us to have to wait.”
When construction begins on the park, it won’t be disruptive, she added. It will be great.
“The business park has been sought after by the community for decades and we’ll be glad to see it go in.”
Once the high drama of construction is over, Harper plans to work with Knight on trail signage related to the history of the site, including details from recent archaeological findings, “for visitors and workers to contemplate where they are in our heritage,” he said.

VISION
Harper and Blittersdorf’s vision for the Stoney Hill business park and housing development brings a kind of small-town nostalgia full-circle into a world where managing smart growth and walkable villages will be key to addressing the climate crisis.
For Harper, it’s a vision that has persisted through two decades.
“What I see are young families,” Harper said. “You turn left (from your home in Firehouse Apartments) and head to a job on a commercial site. You don’t even need a bike to get there. On the weekend you turn right, cross the street and watch your kid play baseball at the Rec Park. This is the way things used to be done.”
Reach Christopher Ross at christopherr@addisonindependent.com.