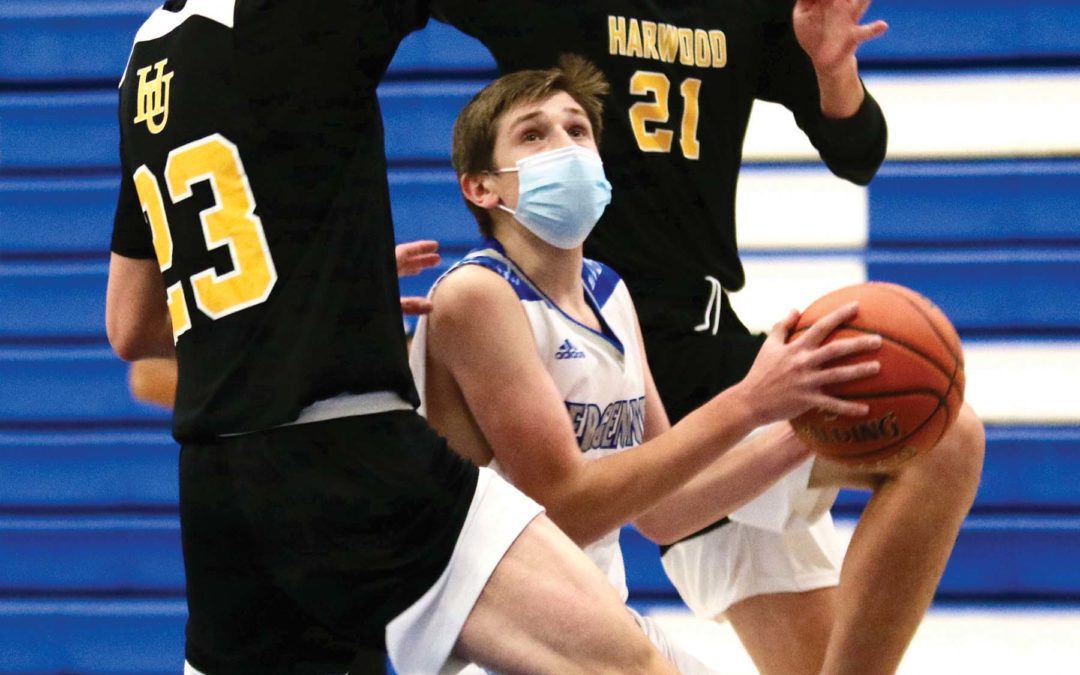 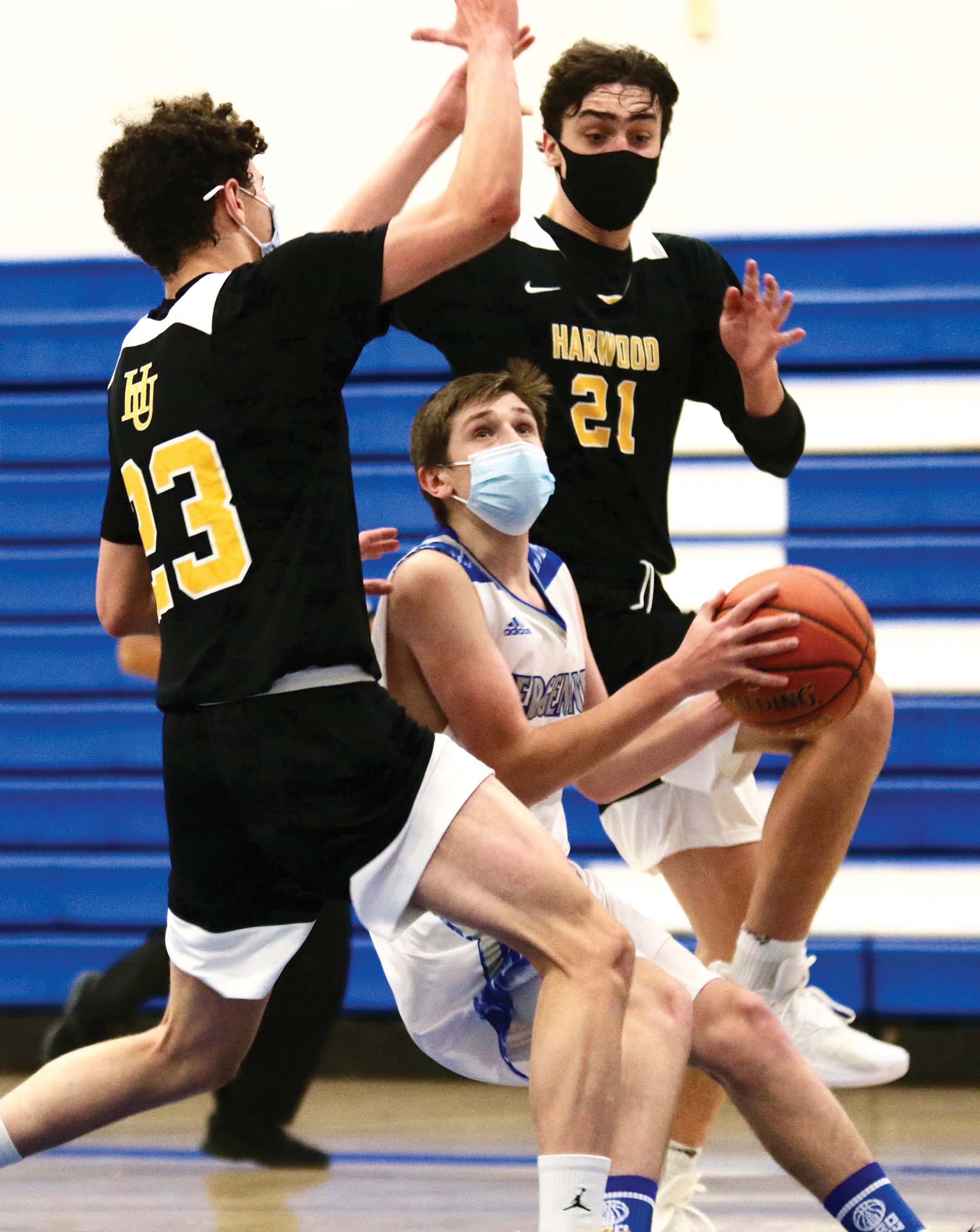 VERGENNES — The Vergennes Union High School boys’ basketball team defeated visiting Harwood on Monday, 61-45.
Statements like that once were not unusual, and based on Monday’s effort it looks like over the rest of this season and into the next they should become routine once again.
Still, it has to be said: The victory was the first since sometime late in the winter of 2019.
No one in the VUHS gym on Monday could say exactly how long it has been since the Commodores won a game.
The losing streak had stretched at least since a playoff loss in 2019. It included 21 games in the 2019-2020 season and the first three games of this winter’s COVID-shortened campaign — that’s at least 25 games.
The good news is a Commodore team with just three seniors dominated 1-2 Harwood, except for a second-quarter hiccup during which they lost a 10-point lead and settled for a 22-22 halftime tie.
Vergennes played effectively in man and two zone defenses; moved the ball well on offense; scored inside and out on jumpers, drives and post moves; and got points from eight players, led by freshman swingman Tyler Bergmans (20), junior guard Hayden Bowden (12), junior guard Timothy Ashley (11), and junior forward Ian Henderson (seven).
Coach Josh Carter said the Commodores had been improving despite their 0-3 record. He pointed to the strong schedule — the losses were against Division I Mount Mansfield (3-2) and undefeated D-II foes North Country and Milton.
That tough competition prepared them to win when opportunity presented itself. Harwood was still within seven points, 38-31, after three periods, and then scored the opening hoop of the fourth.
The Commodores responded with a decisive 12-2 run in which Bowen and Ashley combined for 10 points and Bergmans hit two free throws. All the points came from attacking the basket.
“Playing these really good teams early on … guys are realizing what it takes to win, and a lot of it is effort and spirit and trying to control the things you can control,” Carter said.
At the start the teams were tentative — Harwood led, 5-2, after about four minutes. But an Ashley three off the bench seemed to relax the Commodores, and two Bergmans drives helped them close the quarter on a 10-3 run to take a 12-7 lead.
An Ashley putback, another Bergmans drive and a free throw by senior Jake Russell after a steal pushed the lead to 10 at 5:40 of the second.
But then the Commodores got out of rhythm, either rushing shots or being tentative on offense. Meanwhile five Highlanders scored, and they dominated the boards as they closed the quarter on a 15-5 surge capped by a late Sawyer Simmons three that tied the score.
Carter said his team needed to regroup, and it did.
“It’s something that we’re fighting against right now, that mentality that when things aren’t working to get frustrated,” Carter said. “I think they were able to get over that mental hurdle and come out in the second half and execute much better.”
They immediately reversed the rebounding trend, sandwiching putbacks by Bergmans and Russell around a transition hoop by sophomore Abram Francis. Senior Tyler Jewett also asserted himself on the boards, and Bergmans, Russell and Bowen combined for 13 points as VUHS pushed the lead to 38-31 after three.
Then the Commodores took charge in the fourth, and were never seriously threatened.
Carter was encouraged by their effort in crunch time.
“In the fourth quarter everybody was really locked in and positive and saying, let’s close this out and do the little things like box out, let’s play defense. So that was really encouraging to hear that in the huddle from our guys,” he said.
Forward Isaiah Washington led Harwood with 10 points, and Cooper Olney and Christopher James added seven apiece.
The Commodores have three games left to build on the win: at Middlebury this Thursday, at home vs. Enosburg on March 10, and at Mount Abraham on March 13.
Carter is confident they are ready to continue to compete well.
“I’ve been preaching a growth mindset, and trying to get better every quarter and every game,” Carter said. “And we finally put it together tonight. I think they’re starting to see when they execute they can play well.”