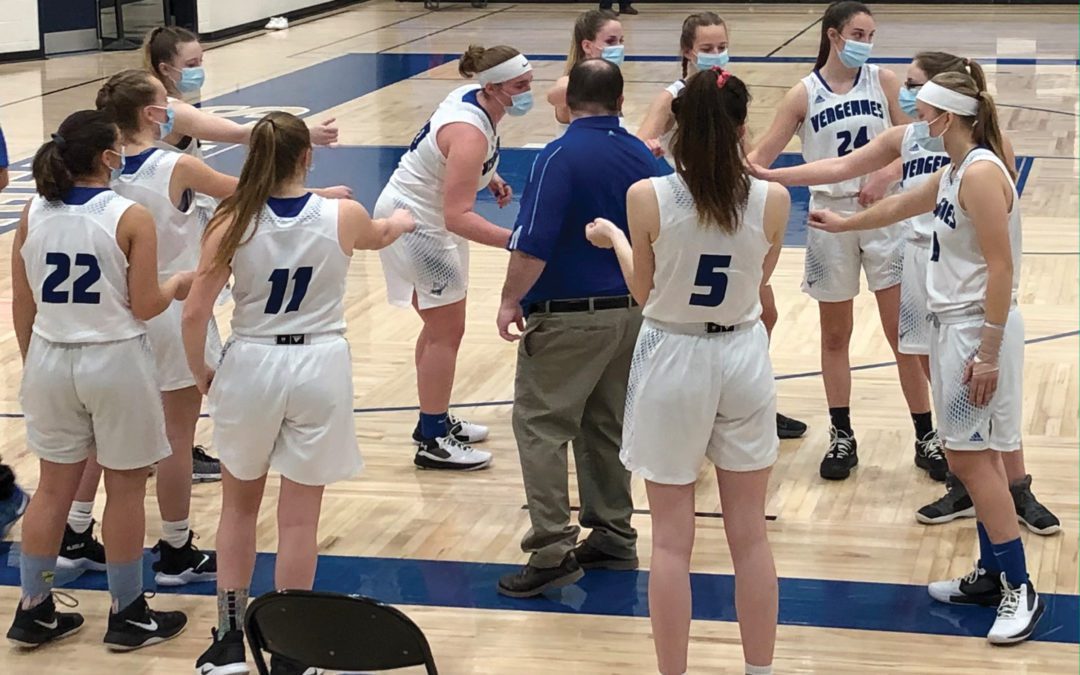 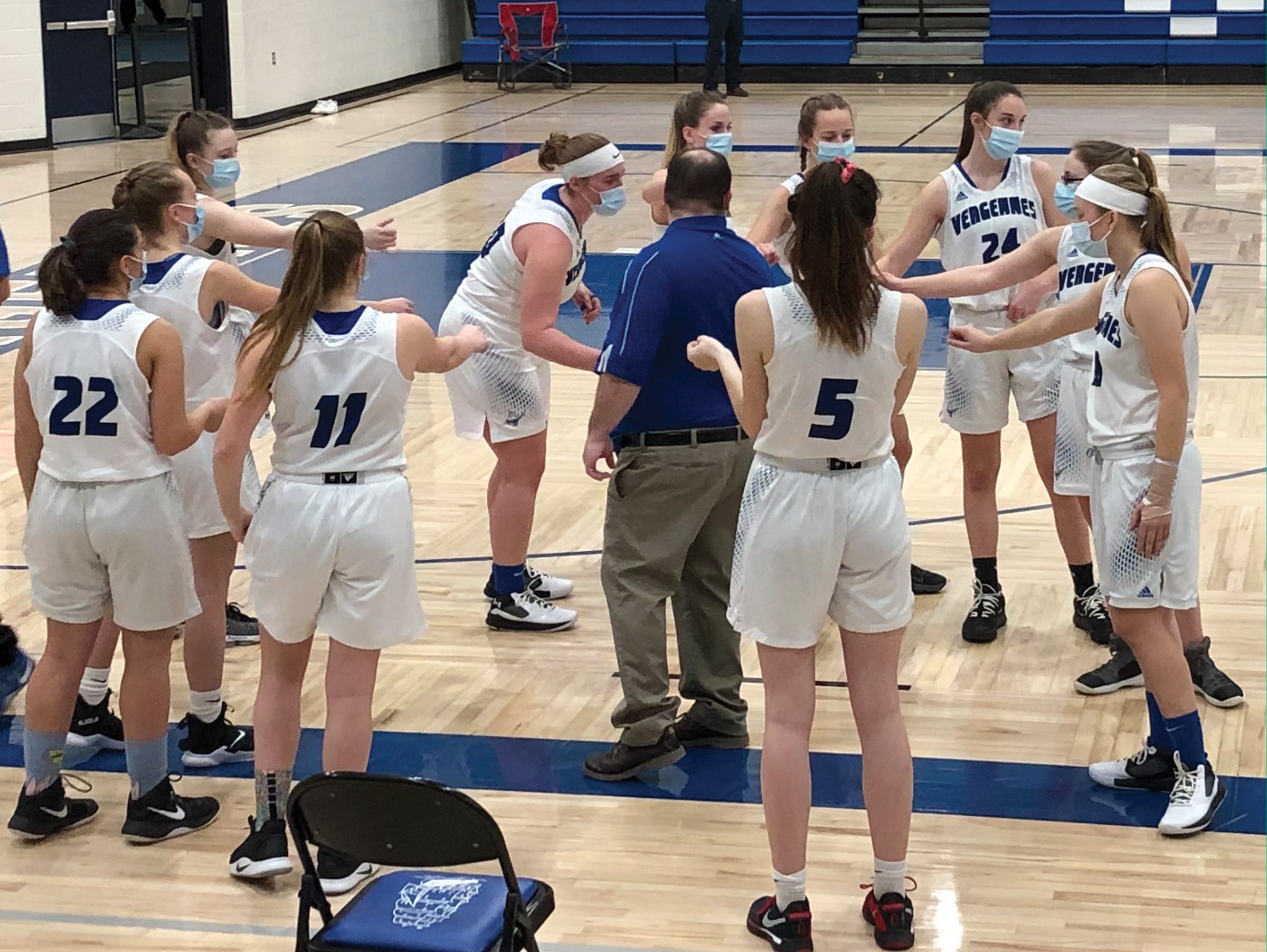 THE VUHS GIRLS’ basketball team put their hands in — following safe no-touch COVID protocol — during an in-game huddle on Monday night. The Commodores improved to 2-0 by putting the clamps on overmatched Milton.
By Andy Kirkaldy

VERGENNES — Visiting Milton posed no threat to the Vergennes Union High School girls’ basketball team on Monday night. The deep Commodores blitzed the Yellowjackets with full-court pressure in the first half and cruised to a 60-15 victory.
The 2-0 Commodores, who for the second game put 11 different players on the floor, had limited a shorthanded Mount Abraham team to eight points in the second half of their opening victory the previous Friday.
On Monday they forced the hapless Yellowjackets into 26 first-half turnovers and led at the break, 30-6, after which Coach Billy Waller mercifully told the Commodores to play half-court defense.
Senior Kate Gosliga said the team — including its eight seniors, six of whom played last winter, when the program earned its first home playoff game in a decade — has worked hard on perfecting its full-court man-to-man pressure defense.
“Communication is the biggest thing, and making sure we’re in the right spots for help-side. We struggled a bit with that in the beginning, but we’re definitely locked in on that now,” said Gosliga, who tied classmate Sydney Jewell for scoring honors with 13 points and helped VUHS earn a 37-26 edge in team rebounds.
The Commodores’ depth helps, too, she said.
“We can all play. So having all of us who can come in whenever is just great for defense,” she said.
Coach Waller said the Commodores have learned the defensive system well.
“We’ve been working on it for two years, and the older kids, they have it. And the kids that are new to the program … they’re getting it,” Waller said.
The defense also leads to offense. The Commodores and their coaches are touting improved outside shooting, but they didn’t hit all that well from the perimeter on Monday, although two newcomers, sophomore Kyra Bradford and junior Ryley Dubois, sank threes.
But at least 16 of their points came directly from turnovers, and the team also worked the ball well around in the paint, especially as the game wore on.
And seven Commodores had four points or more: Behind Gosliga and Sydney Jewell, Bradford scored 10; junior Felicia Poirier notched seven; Dubois and senior forward Hannah Kelly each had five; and senior Jordan Jewell chipped in four.
Gosliga said the outside threat opens up the interior play — the Commodores had five assisted layups and other plays in which they earned free throws with strong passing.
“Offensively I think we’re a lot better,” Gosliga said. “We have some girls who can shoot the three, which is really helpful. And we can have the in-and-out kind of offense. Last year we didn’t have that as much.”
If there was any suspense in the game it might have come when Milton cut the lead to 13-4 two minutes into the second period. In the next 90 seconds Gosliga fed Sydney Jewell for a layup, and Poirier went coast-to-coast for a three-point play and hit a jumper.
After a Milton bucket, Gosliga converted a Poirier feed inside and set up a Jordan Jewell layup to trigger a 10-0 quarter-closing run.
Junior Mallorie Chalmers, arguably the only Yellowjacket who could crack the VUHS rotation, scored seven points to lead Milton.
Tougher competition lies in wait for the Commodores, who are aiming to make the most of a season they weren’t sure they would be able to play — Gosliga said they believe they can compete for a Division III title.
“It feels so good. There were a lot of things that could have kept us from playing,” Gosliga said. “There’s eight seniors this year. It would have hurt a lot if we all lost our senior season. This was supposed to be our best year, so we’re really excited.”
Waller said if they are to reach their goal of competing for a title the Commodores must continue to put in the effort they have since the end of last season and the beginning of this preseason.
“They’re not done getting better,” Waller said. “We had 27 practices before we got to play our first game. Not one kid asked me when do you think we’re going to play. Not one. They came every day with whatever plan we had and acted like it was their first practice. So they keep getting better. They keep improving.”