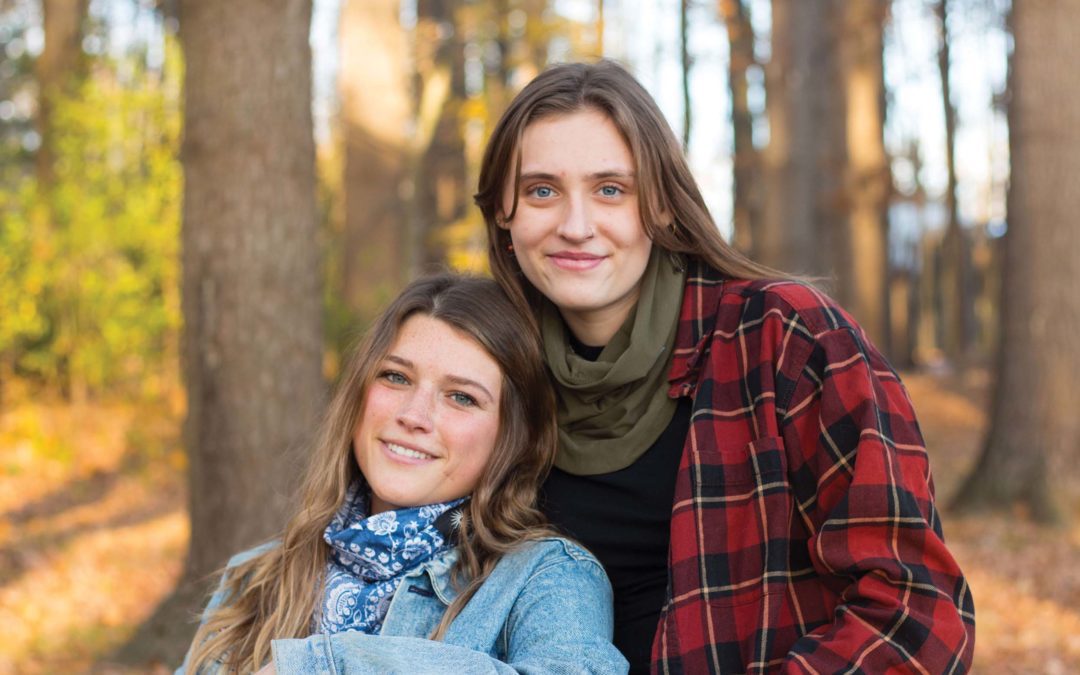 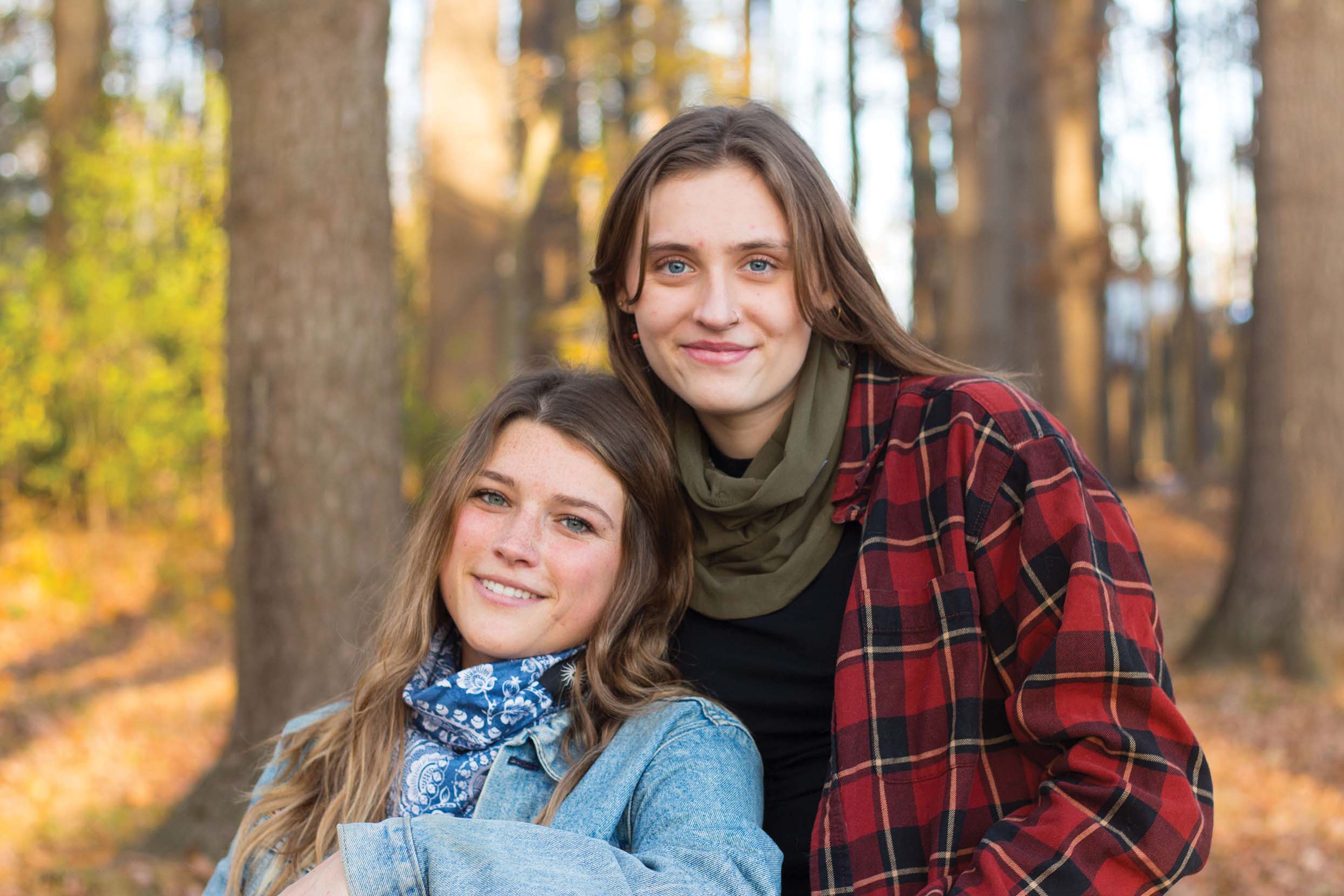 JESSE WULFMAN, LEFT, and Brynn Kent are part of the creative team helping to promote the “FlossOFur” neck warmer, a product designed by fellow Emily Kiernan and the folks at Bee the Change. For every neck warmer they sell, Bee the Change will create 180 square feet of pollinator habitat.
By Christopher Ross

WEYBRIDGE — This fall, after Vermont’s monarch butterflies began their dangerous migration to Mexico and Florida, leaving behind hundreds of acres of fields bursting with seed, Emily Kiernan and her family ventured forth seeking milkweed pods.
Carefully harvesting one or two at a time, here and there, they amassed a total of about 4,000 pods, and brought them home.
“Home” for the Kiernans also happens to be the headquarters for Bee the Change, which plants habitats for pollinators, like the monarch butterfly, in the unused spaces in solar fields.
Setting up shop in their backyard they began separating the floss from the milkweed pods.
“It’s quite the production,” said Kiernan, who graduated from Middlebury Union High School in 2015. “Lots of hours.”
There are different techniques for separating the fluffy white floss from milkweed pods, she explained. Some people like to do it by hand. Others prefer to shake the pods in a box and let the floss rise to the top.
It’s not work you should try to perform on a windy day, they discovered.
Milkweed floss has the same insulation value as down from birds, but it’s less allergenic and cruel, Kiernan said. These qualities make it an excellent material for a new product Kiernan has developed — the FlossOFur neck warmer.
The FlossOFur contains “channels” of milkweed floss sewn between two layers of cloth. It also features V-shaped extensions in the front and back to provide better coverage.
Kiernan, who is the director of design and innovation at Bee the Change, had originally toyed with the idea of designing a winter hat, but decided to develop a neck warmer instead. All the blood that flows into your head flows first through your neck, where heat loss is just as great, she pointed out.

THE MISSION
The monarch is the only butterfly species that is known to make the same sort of two-way migration as birds. Monarchs will travel up to 3,000 miles to reach their winter homes, according to the U.S. Forest Service.
But their numbers are dwindling.
In 2014 a group that included the Center for Biological Diversity submitted a 159-page petition to the U.S. Fish & Wildlife Service requesting protection for monarch butterflies under the Endangered Species Act. The petitioners cited a number of factors for their request, including habitat destruction.
Recognizing that habitat loss from human encroachment is one of the principal reasons pollinators like the monarch are disappearing, Bee the Change began planting pollinator habitats in 2015. Since then, it has created the equivalent habitat of every Vermont household planting a 36-square-foot pollinator garden.
Kiernan views the FlossOFur in part as an “ambassador” to the Bee the Change mission, calling attention to the fragility of monarch butterfly populations, which depend on milkweed to rear their young.
The neck warmers can be purchased through Bee the Change’s Indiegogo campaign. For each FlossOFur sold, Bee the Change will create 180 square feet of pollinator habitat. So far it has sold more than 200 neck warmers, resulting in more than 38,000 square feet of new habitat.

MADE IN VERMONT
In addition to designing and promoting her product, Kiernan is also part of the FlossOFur manufacturing team, which is led by Lisa Berry at Needles in Motion of Middlebury.
Kiernan cuts the fabric, Berry’s mother, Joyce Brown, helps insert the milkweed fluff into the channels and Berry sews it all up.
On the creative side, Kiernan has teamed up with former MUHS alums Jesse Wulfman (2015) and Brynn Kent (2018).
Wulfman, a videographer, was Kiernan’s classmate at the Patricia A. Hannaford Career Center, where they took art and design courses with Lisa Rader.
“I was excited to read about Emily’s FlossOFur venture and her Indiegogo campaign … but not surprised,” Rader told the Independent. “Anyone who has ever touched the floss inside a milkweed pod knows how soft and warm it is, but in the hands of a designer, a creative, a Vermonter, that humble floss becomes a beautiful, practical, and ethical solution.”

NAMING
Kiernan’s father, Mike Kiernan, who founded Bee the Change, explained the development of the “FlossOFur” name.
“Emily and I have similar brains and we were mostly doing something else, sitting in different rooms tossing ideas back and forth like a Frisbee,” he said.
They originally considered “The Necktar” but decided the connection between pollinator food and human apparel seemed too strained.
“(Then) one of us, Emily I think, said ‘Something to do with the Floss?’ And perhaps because I was hearing the word instead of reading it, ‘Flossofy’ came to mind, which we liked for a minute, until one of us brought out ‘Flossofur.’
“Emily has the visual sensibility — you can see that in the fabrics she has designed for our newest neck warmers — and she played around with the capitalization until we had FlossOFur.
“One of the joys of working in a family enterprise in this time of lockdown is the playfulness of random creative tasks. We feel fortunate to get to work on them together.”
For more information about the FlossOFur, visit tinyurl.com/y26mto6v or the Bee the Change website, beethechangehoney.com.
Reach Christopher Ross at christopherr@addisonindependent.com.