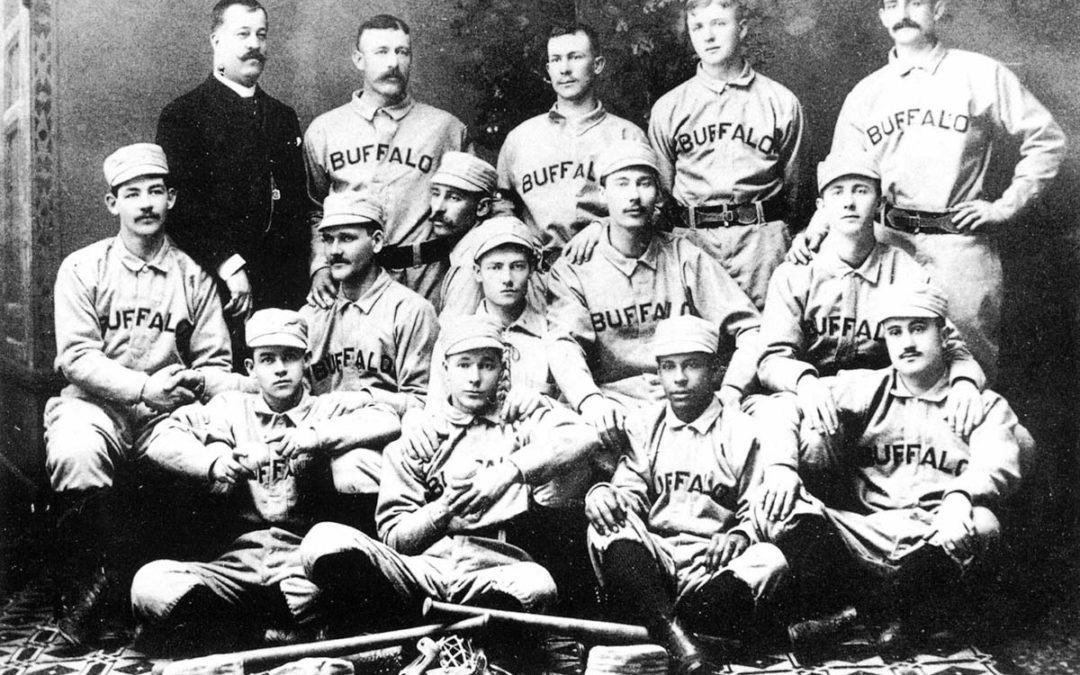 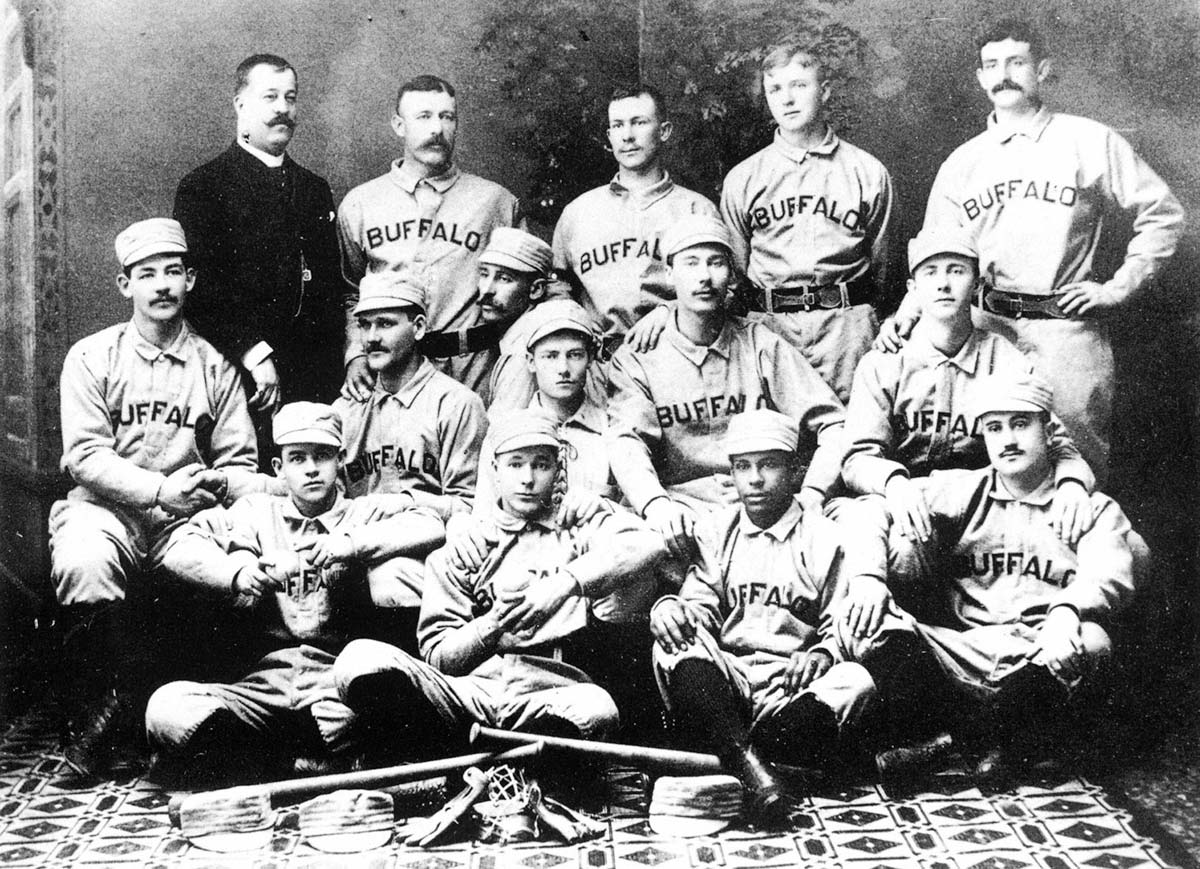 FRANK GRANT IS considered the best of the 19th-century Black ballplayers and was inducted into baseball’s Hall of Fame in 2006. In 1887, while playing for Buffalo, he led the International League in batting with a .353 average. Grant played in Middlebury in 1893 and ’94 for the Cuban Giants against the college boys.
By Karl Lindholm

Black baseball operated in a segregated world. But the walls of segregation were porous.
— Donn Rogosin, “Invisible Men”

Editor’s note: This is the latest in a series inspired by the centennial this year of baseball’s Negro Leagues.
Baseball, the American version of the British games of cricket and rounders, began in an organized fashion in the United States with actual contests in the 1840s. By the time of the Civil War, “base ball” (two words in those days) was a big deal in the U.S.
In the Civil War, both the Union and Confederate armies played the game in their ample downtime. It was a favorite pastime for Black soldiers too: 180,000 freed slaves fought for the North. After the war, these soldiers disseminated the game throughout the country like so many Johnny Appleseeds.
In the 1870s and ’80s, Black players competed alongside whites on integrated teams at the highest levels, though not without incident. Bud Fowler is acknowledged to be the first Black professional player. He had a long career, traveling the country from New England to the West Coast, playing on integrated teams, before ending up with the Cuban Giants after the color line was firmly drawn in the late 1880s.
Moses Fleetwood “Fleet” Walker, who attended Oberlin College, became the first Black major league player when he took the field for Toledo of the American Association (then a major league) in 1886.
The year 1887 was the high point of integrated play in the 19th century with 20 Black players on white professional teams. That year was also the low point, as it was the year the color barrier was erected, the so-called gentleman’s agreement that barred Blacks from organized (white) baseball for the next 60 years.
Two years before, as the color line was being drawn, the Cuban Giants, the first all-professional African American team, was formed, enlisting many of the greatest Black players of the day. Those Cuban Giants played in Florida, a hotel team, and then traveled the East Coast, “barnstorming,” playing all comers, day after day, wherever they could arrange games.
They even played in Middlebury, Vermont.
In all, the Cuban Giants played five games against the Middlebury College boys, the first game in May 1893, and the final game in June 1898. Each game was advertised in giant broadsides (posters), which are saved in the Sheldon Museum’s collection.
The first game was a 17-8 Giants’ win, and the subsequent games were likewise one-sided. The Middlebury Undergraduate (school newspaper) reported, “The only pleasing feature was the coaching by the Giants,” such was the obligation to entertain white fans in interracial contests, then and thereafter, even if it meant playing to broad racial stereotypes.
In the Giants’ lineup against Middlebury in 1893 and ’94 were two members of the Hall of Fame in Cooperstown: second baseman Frank Grant, considered the best of the 19th-century Black ballplayers; and Sol White, player, manager, and historian, the author of “The History of Colored Baseball” in 1907.
Though the Cuban Giants had no Cubans (the thinking was that being “Cuban” would be an advantage in scheduling games in the U.S.), Cuba itself was the winter destination for the best Black and white ballplayers, a beisbol paradiso, from the 1880s to the 1950s and the Castro Revolution.
There was racism in Cuba, but of far different quality from that in the United States. There were Black Cubans, descended from African slaves, and white Cubans from Europeans, and many admixtures, who played on the same teams. In the U.S., Black Cubans played in baseball’s Negro Leagues, over 200 of them, and 41 white Spaniards played in the Major Leagues. Martin Dihigo, Jose Mendez, and Cristobal Torriente are Cuban Negro Leaguers in the Hall of Fame in Cooperstown.
In baseball’s winter offseason, both white and Black American players went to Cuba to play, often on integrated teams. White professional baseball players, Major Leaguers, knew well the skills of their black contemporaries.
Interracial games were a popular feature of American culture for as long as the game was segregated. After the formation of the Negro Leagues, white players played against whites, and Blacks largely against Blacks, in their leagues during the summer. In the off-season, however, interracial and integrated play was commonplace.
While the game was segregated at the highest level — Major League teams and their minor league subsidiaries, at other levels, and outside of organized baseball, as Rogosin put it, the “walls were porous.”
Nobody in the game, outside of ownership — neither white players and certainly not Black players — was making sufficient money to take the “offseason” off. So after the World Series in the fall, white and Black stars collaborated on exhibition, or “special attraction,” games.
In the 1930s, the Satchel Paige All-Stars and the Dizzy Dean All-Stars played a number of these games before big crowds. They were kindred spirits, Diz from Arkansas and Satch from Alabama. Satch was already a legend in Black baseball and Diz was Major League baseball’s best pitcher.
If I could travel back in time to just one game, I would choose the contest between Satch and his Black minions, and Diz and his club of white stars in November 1934, before 18,000 fans at Wrigley Field in Los Angeles, a 1-0 thirteen-inning victory for Satch’s Giants: Satch struck out 17, Diz 15.
Diz said of Satch: “If Satchel Paige and I were pitching on the same team, we would clinch the pennant by July Fourth and go fishing until World Series time.”
In the 1940s, Satch was still the reigning ace of Black baseball. In October 1946, Major League great Bob Feller organized an ambitious barnstorming series between Satch’s all-stars and Feller’s. The two teams traveled in their own airplanes (DC-3s) and played 34 games in 27 days, visiting 32 cities in 17 states, from New York to Los Angeles, 13,000 miles, for more than 250,000 fans.
Baseball historian John Holway extensively researched Black/white games, contests between Negro Leaguers and Major Leaguers during segregation. He found box scores of 167 games: the Black stars won two-thirds.
Negro League baseball, Black baseball generally, is sometimes called an “Atlantis,” a hidden baseball world.
Not that hidden.