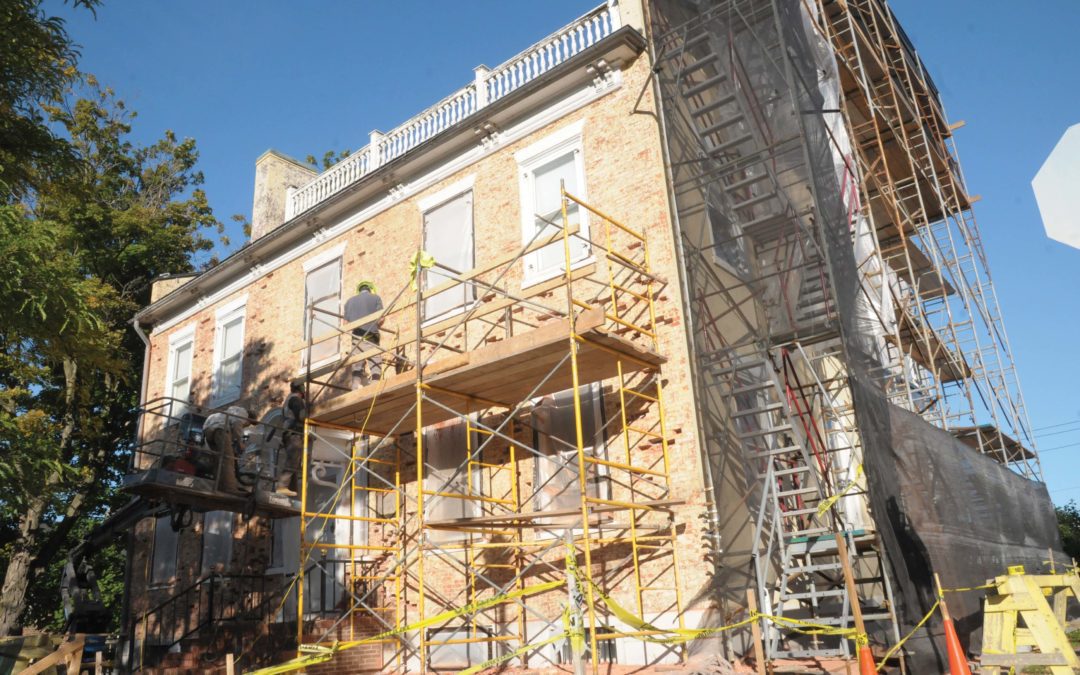 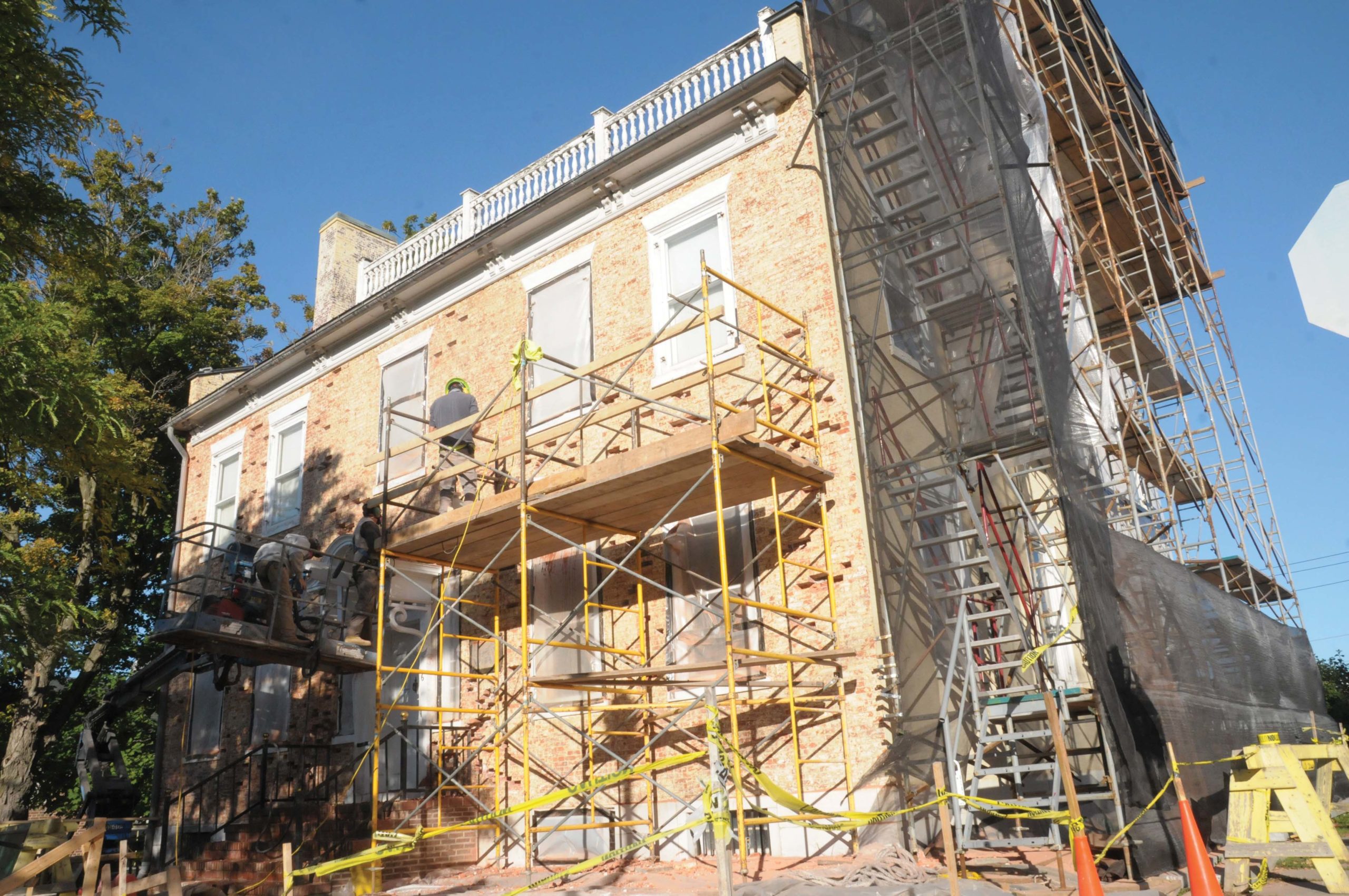 WORKERS ON SCAFFOLDING in front of the Middlebury Community House last month do some fine tuning of the bricks on the façade of the 204-year-old building. Independent photo/John S. McCright
By Andy Kirkaldy

MIDDLEBURY — While dozens of workers and huge cranes and trucks were populating downtown Middlebury this summer during the installation of a $73 million infrastructure project, another ongoing public upgrade might have flown under the radar — even if it was almost directly over the railroad tunnels being created.
The Middlebury Community House, a 204-year-old historic landmark at 6 Main St. that was once home to prominent citizens but now exists to benefit the town and its citizens, is getting an almost total exterior restoration.
“The project itself has been in the works for many years,” said Bryan Phelps, vice president of the volunteer board that oversees Middlebury Community House and its operations. “The main impetus for it was the brickwork was starting to deteriorate.”
But Phelps said the roughly $500,000 project includes much more, from work on its rooftop to the fencing around much of the perimeter.
An inventory of the effort overseen by general contractor Silver Maple Construction LLC of New Haven includes:
•  Removal of all the old paint from brick and woodwork, including at least one layer of hazardous lead paint, by Heritage Environmental Services LLC.
•  Replacing and repointing of bricks as needed by Alpine Masonry and Restoration, and a finish coat of historically accurate yellow paint specially formulated for bricks applied by Magic Brush Painting, as well as wood trim paint. “It will be restored back to its original color of yellow and hopefully last for many, many years,” Phelps said.
•  Rebuilding of deteriorating woodwork, including balustrades (ornamental railings) along the roofline and fencing along the Main and Seymour street sides by Silver Maple.
•  Replacement of the back porch roof with a standing seam roof.
•  Replacement with granite of marble pavers of the front entry that Phelps characterized as “falling apart.”
As for the cost, the board hopes to get favorable news on grant applications, but Phelps said board members know competition is tough for grants in the best of times, never mind in the COVID era.
He said they are prepared to use the community house’s endowment to fund some of the work directly and to pay off a National Bank of Middlebury loan over time for the balance.
“The endowment has done well, and we’ll be able to complete the project,” Phelps said. “Ideally we’ll get some help from the grant sources.”
The work is being done on a property that is certainly rich with history.
It was first built in 1816 as a home for Horatio Seymour and his family. Eventually, Seymour’s great-granddaughter, Jessica Stewart Swift and her brother, Philip Battell Stewart, inherited the property. In 1938 they donated it, complete with its furnishings, to “the people of Middlebury and surrounding area.”
The gift came with conditions: that it “benefit the young people in town in promoting their moral, mental and physical welfare”; provide a community meeting place for “social, recreational and educational betterment”; and be used for charitable purposes.
Over the years the Middlebury Community House has been run by its board and a small, part-time staff. It had been rented for activities that include piano lessons, church services, weddings, receptions, art displays, meetings and special events — including for many years Christmastime visits with Santa Claus — but in 2013 the board opted to seek a more financially stable arrangement.
After a search, the board reached a deal with the Middlebury Community Music Center, and that nonprofit music school has ever since been leasing all the community house’s rentable space for private lessons, group classes, camps and workshops for students of all ages.
Phelps described it as an excellent arrangement.
“They match very well with the mission of the nonprofit, and I think they like the space and they like the location,” he said.  “It’s been a very good relationship between the two nonprofits.”
During the pandemic the music center has been offering remote instruction, which also solved a dilemma for the board — how to accommodate its tenant during the noisy project. The center is not paying rent, Phelps said, and the hope is some sort of return to in-person instruction can be arranged after work concludes in November.
“We’ve been planning the project for a long time, and had been trying to figure out how to do this project logistically,” he said.
Things are going smoothly, despite the pandemic and the larger rail tunnel project bustling around it.
“We’ve been very happy. Silver Maple has done a great job of setting this all up for us,” Phelps said, adding, “When this is all done, the exterior of the building will be in much better shape than when we started, and will be in a position to not need a lot of work for at least the next 10, 20 years.”