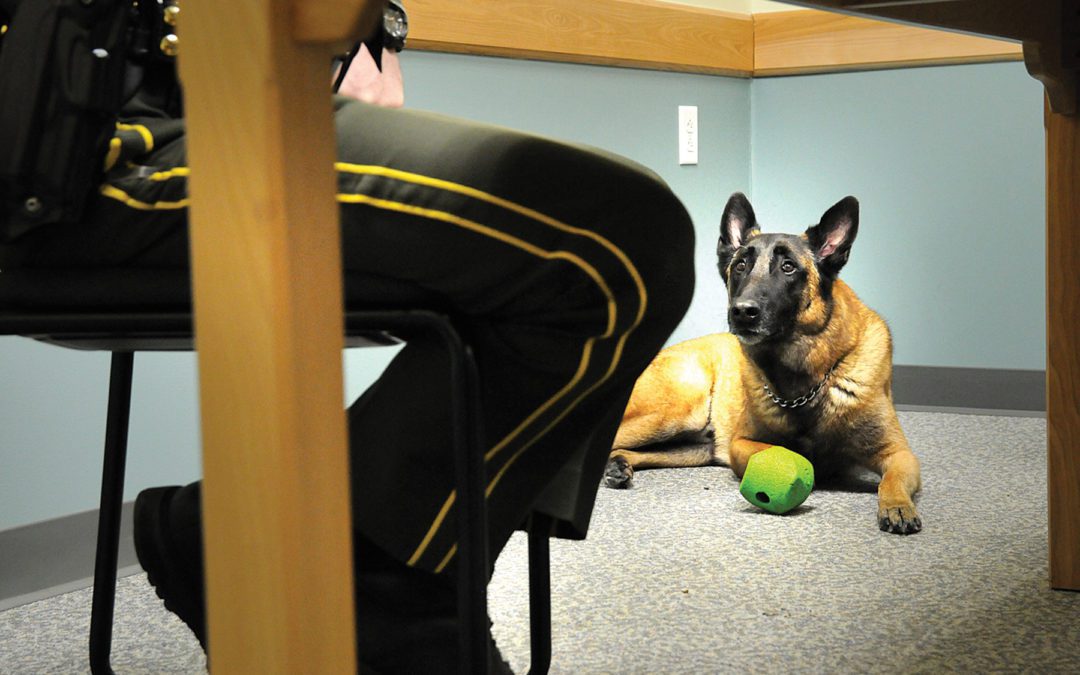 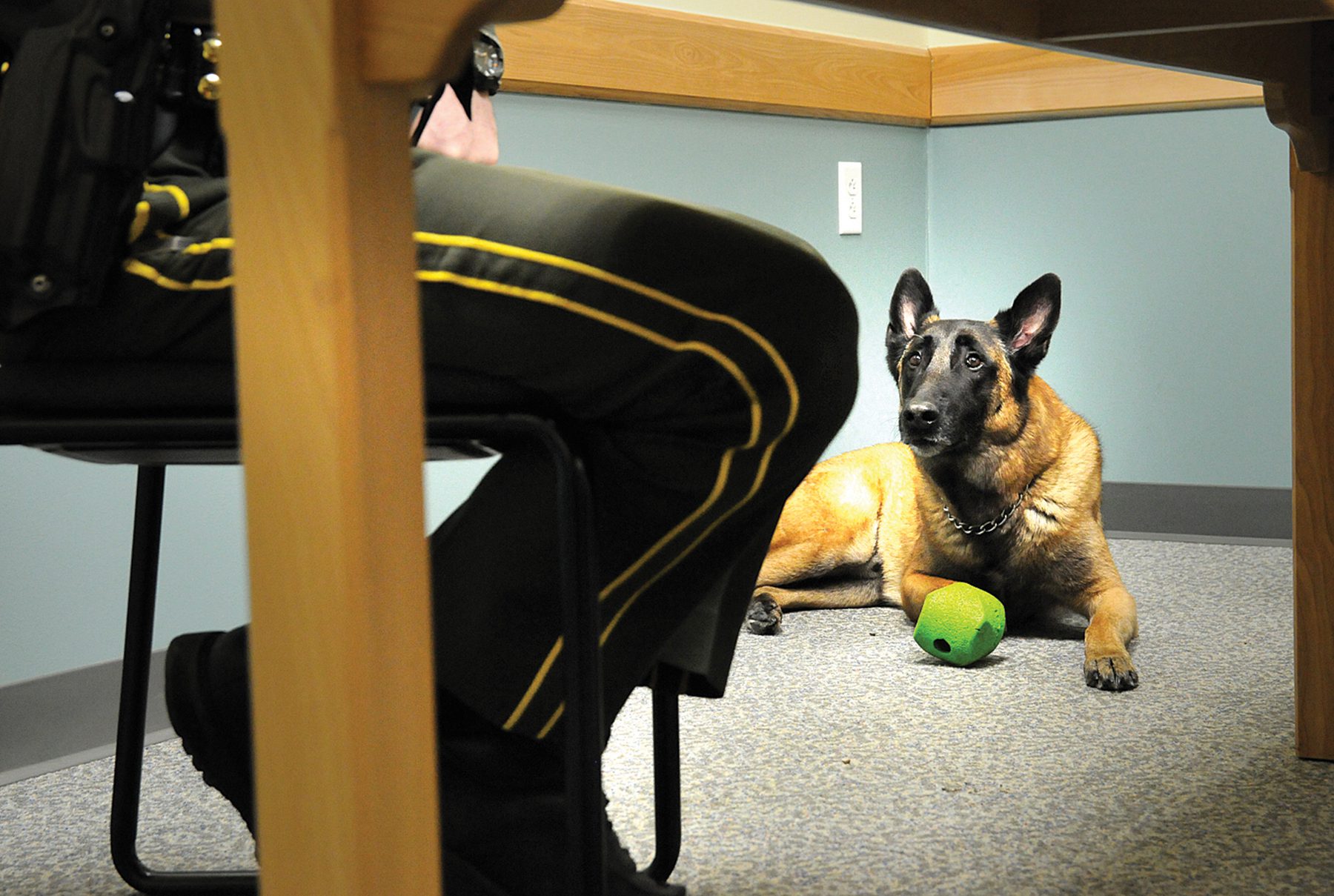 VERMONT STATE POLICE dog Vincent, a Belgian Malinois, keeps an eye on his partner, Cpl. Justin Busby, while hanging out in an interview room in the New Haven barracks during a 2016 media interview. After a career in law enforcement, Vincent died recently in retirement.

Retired Vermont State Police K-9 Vincent Busby (aka Vinnie, Vince or Vincent the Invincible) died Aug. 11, 2020, after delighting his family and keeping the public safe for 13 years. Whether he was patrolling with Cpl. Justin Busby and catching “bad guys,” entertaining children at Camp Whiskers and Wags, mooching in the Addison County Home Health and Hospice office or relaxing with his family, Vinnie was a beautiful, brilliant, lovely dog.
Vinnie and Cpl. Busby were assigned to the New Haven barracks and were well known to many in Addison County. They were certified in patrol together in 2009, and in 2010 Vinnie became a certified drug K-9. Vinnie completed countless demonstrations for schoolchildren and frequently visited community organizations throughout the county during his career.
He completed 146 calls as a state police K-9 and retired in 2018 at 10 years of age (that’s 70 in human years). His colorful career included finding a handgun that had been used in a shooting in a very large field of tall corn, tracking an inebriated suspect who fled from the scene of an accident four miles in a blizzard and sniffing out countless pounds of illegal drugs. Cpl. Busby and Vinnie were named “Patrol Team of the Year” and they were featured in Ford Motor Company’s National Law Enforcement calendar.
“Lurking under Vincent’s cashmere-soft auburn coat and his adorable, dark-chocolate muzzle is a sense of duty that can be flicked with an audible switch that can prompt him to drop his ball and instead use his jaws to detain a suspect by the arm or leg,” reporter John Flowers wrote in a 2016 Addison Independent K-9 profile.
When Vinnie was on duty, he was all business.
After Vinnie retired from his brilliant Vermont State Police career, the hard-working dog sought out a part-time position at Addison County Home Health and Hospice. He was the first dog in the history of the agency to have a name badge and he took his responsibilities as Community K-9 Liaison very seriously. He spent many happy hours with Carol at the front desk and calmed and cheered up countless employees when they were dealing with the stresses of working life. Vinnie could always be counted on to help you sneak him food. He was a leaner — resting against your leg — and if he really liked you, he would stand on your foot.
Vinnie comes from a very happy, close-knit family who loves him tremendously. He delighted his girls with his patience while being dressed as Santa (numerous times), Little Bo-Peep and Superman. The girls once painted his toenails with glittery paint the day before a state police function and he did not mind at all (Cpl. Busby may have had a slightly different opinion). In the words of his dad, after retirement “Vinnie lived the rest of his life loved and in comfort taking hugs from his girls and walking with his mommy.”
Editor’s note: This story was provided by Maureen Conrad.

Share this story:
This article’s tags:
K-9, Pet of the Week, Vincent the Invincible, police dog