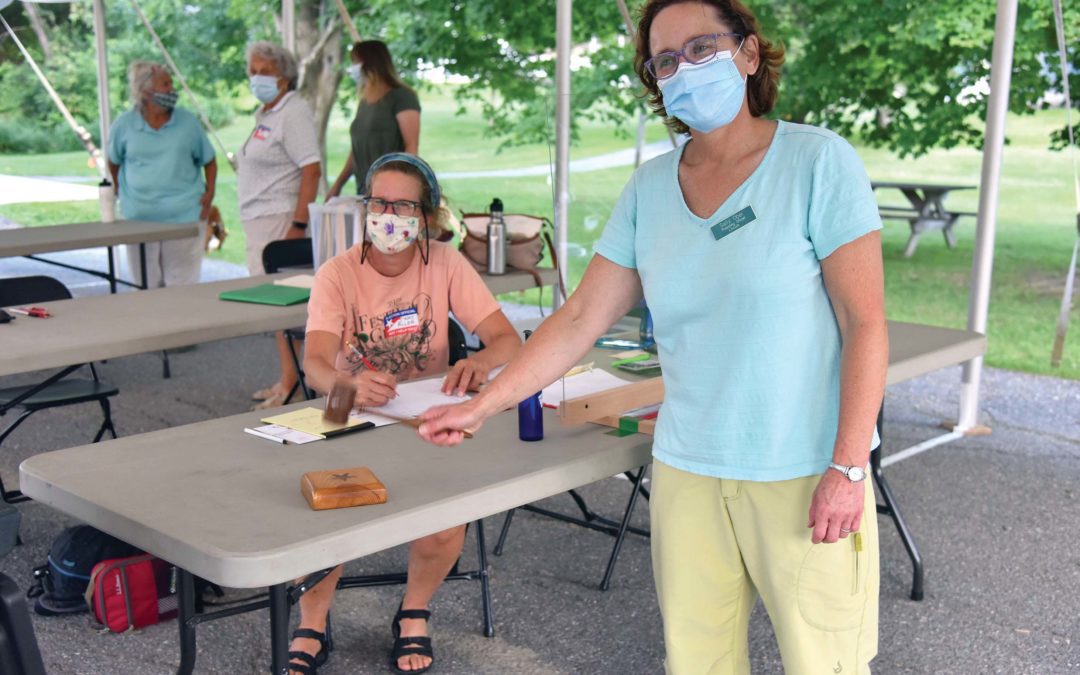 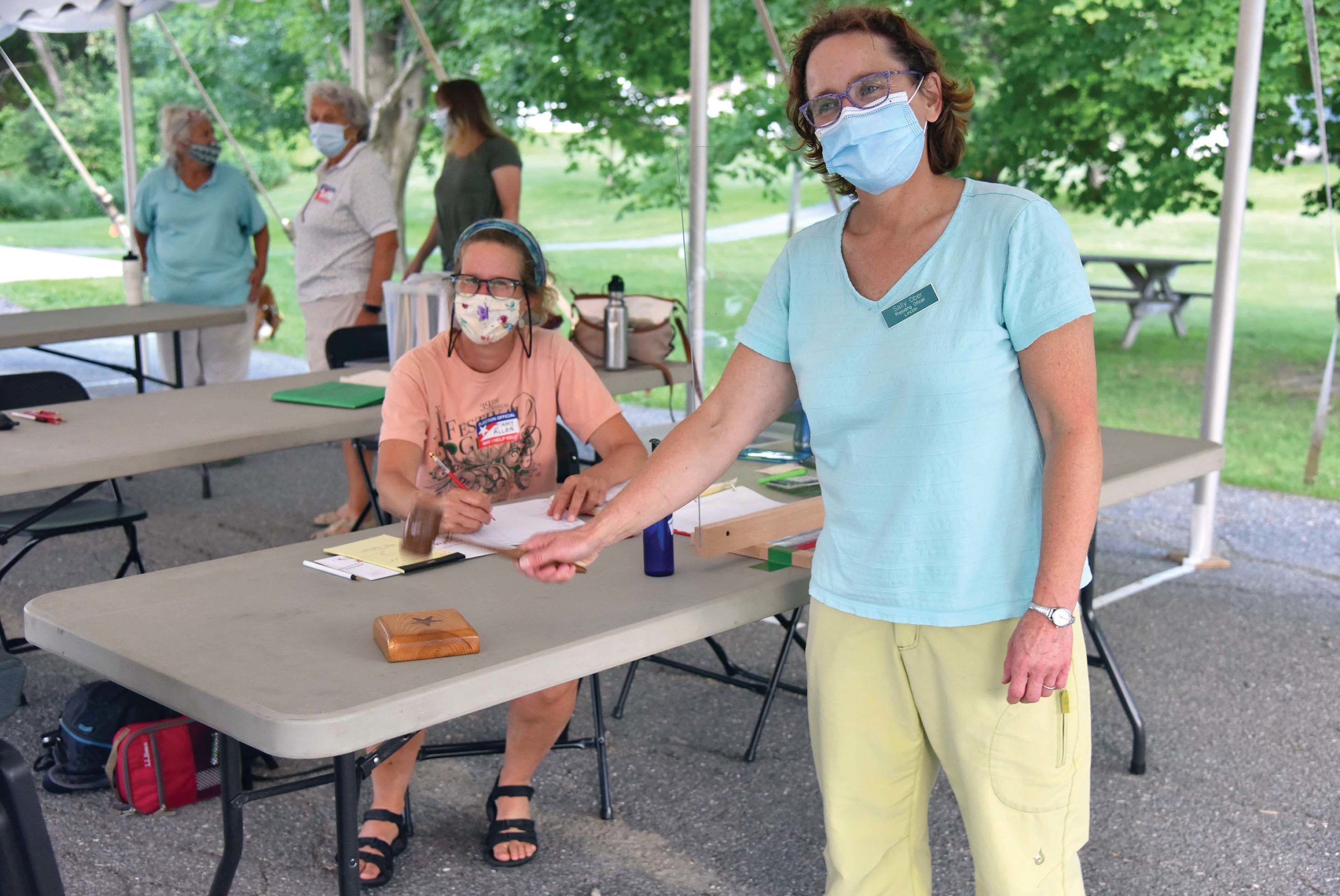 ADDISON COUNTY — A record number of Vermonters voted in Tuesday’s primary, and the majority of them voted early by absentee ballot.
As of Wednesday afternoon, with all but one state district recorded, the Secretary of State’s office reported that 159,701 ballots had been cast in Vermont — 33% more than in the 2016 primary and 48% more than in 2018.
Late Tuesday night, the Secretary of State’s Jim Condos and his staff were ebullient.
“With 95% of districts in, it appears Vermont voters have shattered the previous primary turnout record AND our amazing election officials have reported results on election night without delay — in the midst of a global pandemic,” officials wrote in a Twitter post. “You’ve done Vermont proud.”
Before the primary, more than 100,000 Vermonters had requested absentee ballots — also shattering a record.
In June the Legislature gave Condos the authority to set up a system of mail-in voting that would guard against spreading the coronavirus by reducing the number of people at Vermont polling stations.
In Addison County, as elsewhere in the state, town clerks received a flood of early ballots. But there were also many people who braved the pandemic to vote in person at their local polling places, which were adapted for the hygiene and social-distancing requirements established by the state to protect public health.

BRISTOL
Bristol, for instance, mailed out more than 900 absentee ballots before Tuesday’s primary, and 644 were returned, said Town Clerk Sharon Lucia.
Early ballots accounted for nearly two-thirds of the total votes cast.
Bristol usually holds elections on the main floor of Holley Hall, but officials decided to set up Tuesday’s primary downstairs in the town offices, because it was cooler, Lucia explained.
“People came in at the main door, voted in the town clerk’s office and went out the back,” she said.
Throughout the day a steady stream of people filed into the clerk’s office to cast their ballots. When a couple of voters showed up without face coverings the town supplied them with free masks.
Election officials assisted a couple of Bristol voters who could not come inside — either because of a disability or an inability to wear a mask — by supplying ballots at their vehicles.
“Everything went smoothly,” Lucia said. “Everyone followed the rules and there were no complaints.”
With Tuesday behind her, Lucia is already looking ahead.
“We’re already prepping for November,” she said. “Nominations for Justice of the Peace are due on Friday.”

MIDDLEBURY
Near the end of the election day on Tuesday, Middlebury Town Clerk Ann Webster said voting was heavy this year. Typically a primary draws 900-1,200 votes, but this year there were more than 2,200. The majority of those votes were cast in the early voting/mail-in format, though there were times during the day when in-person voting picked up.
Webster welcomed the increase in mail-in ballots, though she said it can take a little more time. She said it takes some work to get out the ballots to people who requested them, then to track them when they come in, ensure that they are legitimate and filled out properly.
“It’s quite labor intensive,” Webster said.
Nevertheless, she’d have liked to see more early voting. Among other reasons, she said sending the ballot to the voter gives them a little nudge to get them to vote. Ultimately, this could mean more people get a say in their democracy.
Still, elections officials need to find ways to educate voters on how to fill out and cast their early ballots. If a ballot is filled out incorrectly then it is called “defective” and not counted. Webster said Middlebury’s rate for defective mail-in ballots is around 10%, which is too high.
Middlebury did lose some of its older poll workers, who decided not to work in a polling place during a pandemic. But Webster filled out the staff with younger people. They also set up fewer positions where voters could fill out ballots and spaced them further apart than in previous years.
Those who used a small pencil to fill in their ballots dropped them in a box at the end of the process. Webster said they would close up the box, let any potential contamination dissipate, and use them again in the General Election.

LINCOLN
Because absentee voting turnout was so high, Lincoln saw fewer in-person voters than usual this year, wrote Town Clerk Sally Ober in an email to the Independent late Tuesday night.
For context, Ober supplied three primaries’ worth of Lincoln’s voting data:
In 2016 – 407 people voted in the August primary, including 57 by mail.
In 2018 – 444 people voted, including 47 by mail.
On Tuesday, 660 people voted, including 410 by mail.
“We held our election under a big tent outside the office, to allow for better social distancing and more air flow between people,” Ober explained in the email. “Indeed, a gentle breeze cooled us throughout most of the day. It was kind of fun to hold our election outdoors and we were grateful that the weather held up. There was only a brief sprinkle of rain.”
Even before the polls opened, Ober was having a remarkable day.
“As I left my home at 5:30 a.m., I rescued a baby robin from the middle of Creamery Street in front of my house (I walk to work because I live across the street from the town office),” she wrote. “At about 6:15 a.m., we were carrying things out of the building to set up under the tent, and a young deer, still with spots, ran right past our polling place. It tried to run through an iron fence across the street and kept bashing into the fence in a panic. I ran out onto the road and stopped a car, then slowly urged the little deer along the fence until it got to the end and ran off toward the church.
“This definitely added excitement to our morning and I might not have seen the deer if we were voting indoors.”
Not long after her encounter with the deer, Ober saw a toad hopping through the polling place.
This year the post office has been especially helpful with the election process, she added.
“Three cheers for all of the postal workers! They have been working so hard to handle our tremendous numbers of absentee ballots this year, and we have appreciated the role they have played in the success of this election.”

MONKTON
Holding an election in Monkton, which requires transporting supplies (and in Tuesday’s case, hundreds of absentee ballots) from the town offices to the Monkton Fire House, is already plenty of work. Adding in a few steps to stay safe during a pandemic was nothing that Town Clerk Sharon Gomez and her team couldn’t handle.
“We set up a timer and disinfected every hour,” Gomez said. “We disinfected the pens. We disinfected everything.”
They also posted a sign outside that said “No mask, no entry.”
The couple of voters who showed up without face coverings received free masks onsite.
Gomez herself wore a facemask for 16 hours on Tuesday.
“COVID made it a little work, represented a few extra steps,” she acknowledged, “but town clerks are good at working things out.”
She also got a little help from a family member.
“My father-in-law built us some Plexiglas barriers, which we used at the check-in and check-out stations,” she said.
Like its neighbors, Monkton saw far fewer in-person voters than usual on Tuesday. The town sent out 537 absentee ballots before the primary, and 471 of those were returned.
About a third of the total voters showed up to the Fire House, where 7 to 10 town officials helped them throughout the day.