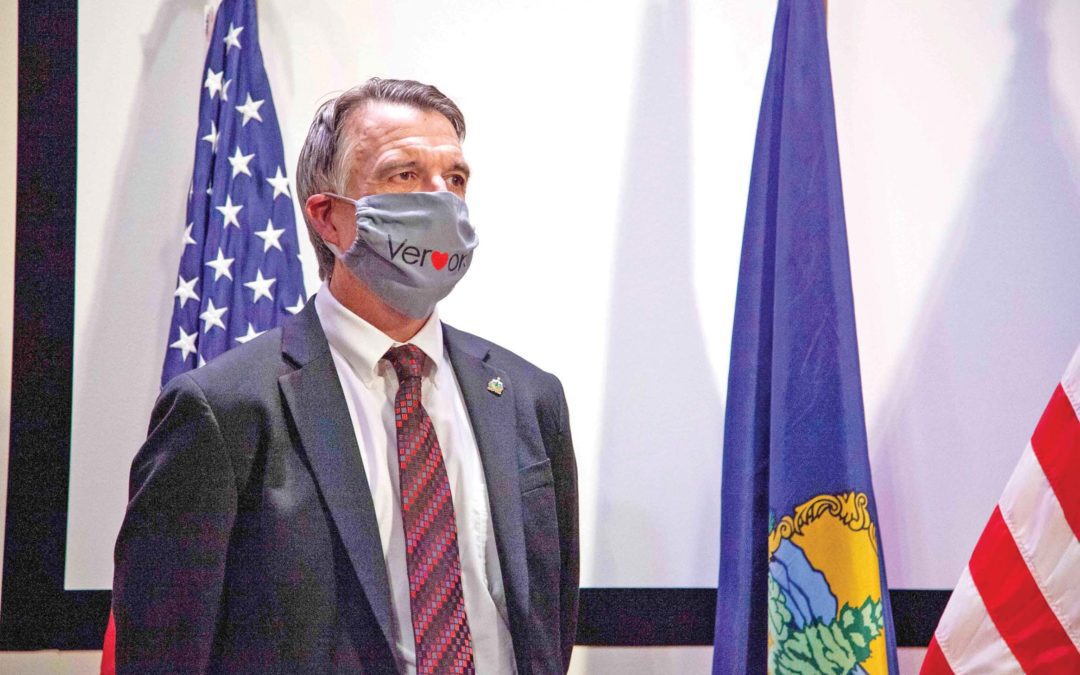 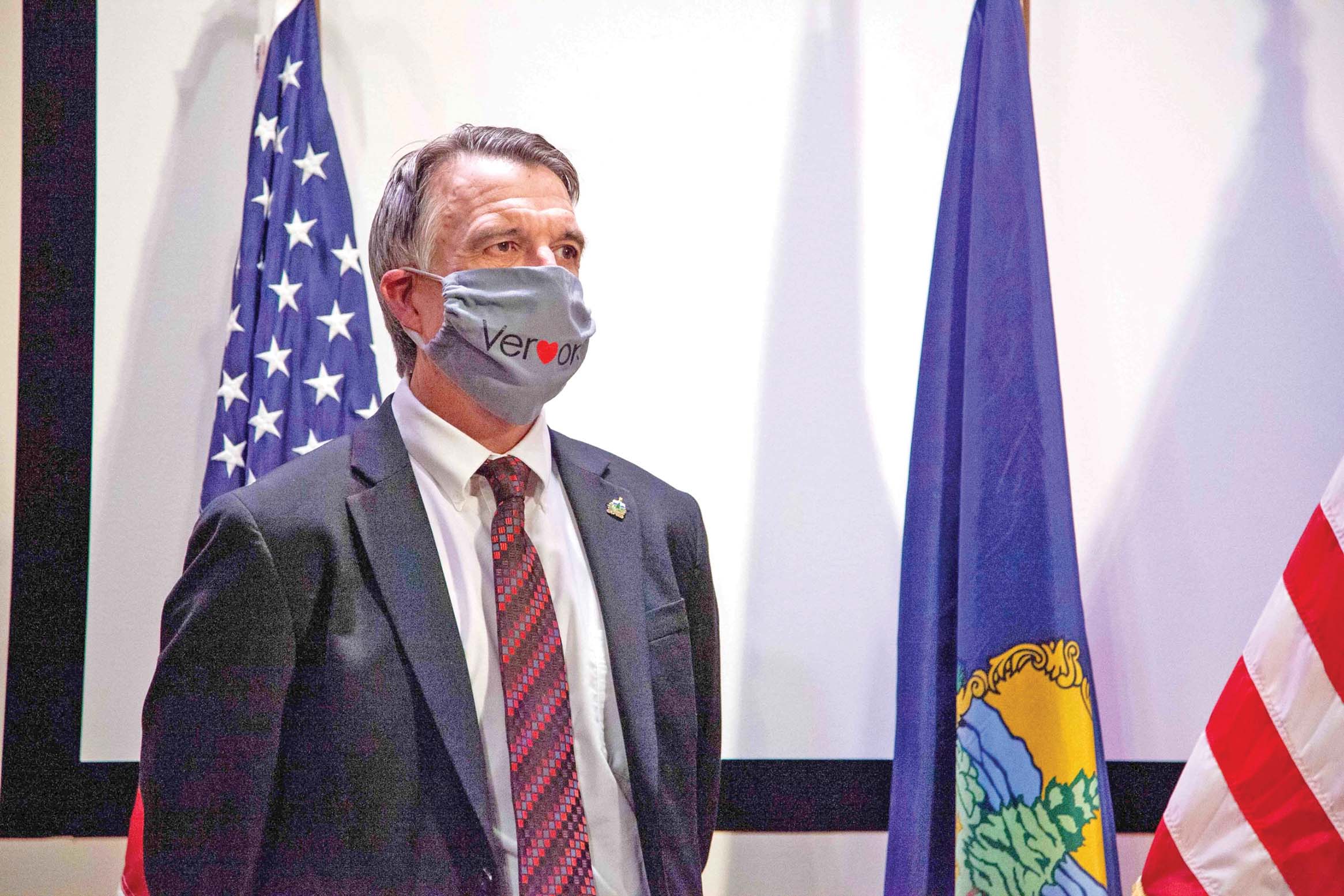 Look at the data, the real data; realize the science is real. Wearing a mask will protect the gains we have made.
— Gov. Phil Scott

VERMONT — Maura Donnelly, who owns the Bristol children’s shop Simon Says on Main Street, was pleased that Gov. Phil Scott has mandated Vermonters to wear masks in public beginning Aug. 1.
“I think it’s awesome,” she told the Independent on Monday. “Very late, but I’m glad to see it.”
Earlier this month, a couple of Donnelly’s teenage employees were accosted by an adult customer who refused to wear a mask in the shop, even though a sign outside clearly indicated it was required.
Donnelly detailed the incident, which had upset her employees, in a July 12 letter to the Bristol selectboard, and she asked the town mandate mask wearing, or at least pass a resolution requiring mask wearing.
When the board met on July 27 to continue discussing the issue, Gov. Scott had already made his announcement.
Scott on Friday ordered people in Vermont to cover their faces when out in public.
The Republican governor said that while Vermont’s COVID-19 infection rate is still among the lowest in the country, a rise in cases elsewhere in the U.S. has put Vermont on the defense.
Scott has long resisted a mandate, saying that education is the best way to get people to wear masks in public. Thirty-one states and the District of Columbia now require most people to cover their faces when out in public, according to the AARP.
But on Friday, Scott noted cases are still surging elsewhere in the U.S., including in states like Florida. Florida has 400,000 cases of coronavirus; 173 people died in that state of the virus just a day earlier, according to the Florida Department of Health.
“With our low numbers and other considerations, I have waited to implement a mask mandate thus far,” Scott said. “I preferred to focus on education, helping Vermonters understand why they should wear a mask, which is to protect their neighbors and themselves and keep Vermont open so they could make the right choice on their own.
“I still believe that has been the right approach to date, but looking at the situation in the South and West and knowing we’ll have more people coming to Vermont, and more Vermonters inside as the weather gets colder, we need to be sure we’re protecting the gains we’ve made.”
Starting Aug. 1, masks will be required of anyone over the age of 2, unless the person has a physical or developmental disability that would be complicated by the wearing of one. Businesses will be permitted to decline serving customers who don’t wear masks. Masks will be required outdoors if it’s impossible to keep a distance of 6 feet from others. Scott said there’s an exception in the case of strenuous exercise.
People who decline to wear a mask because of health concerns will not be required to produce documentation.
“Doing so would clearly be a violation of their healthcare privacy rights,” Scott said.

BACK IN BRISTOL
Donnelly isn’t the only Bristol resident glad to hear the governor is backing them up on mask wearing. Another local had complained to the Bristol selectboard about face-mask harassment.
In a July 22 email to the town, Kelly Hedley described an incident that occurred at Bristol Laundry on Main Street, which has a policy requiring customers to wear masks “clearly posted everywhere.”
Of the roughly 10 people using the facility during her visit last week, Hedley said she’d been the only one wearing a mask.
“I went to my car while (my laundry) was in the machines,” she wrote. “When I went to re-enter, a group that was not wearing masks decided to block the entrance and I asked them if I could get in and they didn’t move, just gave me a look.”
When one of them moved, she snuck past them, she wrote.
“I was followed in by one female who decided to stand prob(ably) 6 feet away and loudly vent about how she hated mask wearers and how stupid they are. I’m assuming a confrontation was wanted. One of the men had a gun on his waistband. I wasn’t inviting confrontation so I did the laundry I went there to do and left.”
Hedley said she texted the owner about what was happening and later received a reply explaining that the owner had gone to the facility and was also screamed at by the group.
The Independent reached out to Bristol Laundry owner Jill Fraga for comment, but she did not reply in time for this story.
“I’m not mad at the company,” Hedley told the selectboard. “I was uncomfortable. And why?!? Because I choose to wear a mask to protect them? Because even if they don’t care about me I care about them?”
Bristol selectboard member Darla Senecal referenced Hedley’s story at Monday night’s meeting.
“In light of the letter that was received, and knowing that not only some of the kids in our community who are working are getting harassed, but we have adults that are also getting harassed, I feel like this is really important for us,” she said. “I really think it’s important for us as a community and as a board to take a stand one way or the other on it.”
After some discussion the board voted unanimously to “support the governor’s mandate to require masks be worn in all establishments.”

STATE MANDATE
Violators of Scott’s mask mandate won’t be penalized; Scott said that the state is relying on education for enforcement. “We haven’t put a fine structure in place at this point in time,” he said, though he noted that could be implemented later.
Scott said the state’s COVID-19 case modeling last week had pushed him to make the mask decision. Among other things, thousands of college students are expected to move to Vermont from around the country in the middle of next month.
Mike Pieciak, commissioner of the Vermont Department of Financial Regulation, said the country recently hit 4 million cases, a benchmark that shows the virus’ staggering toll — and also its growth in recent weeks.
The United States took 15 days to go from 3 million to 4 million cases, compared to 99 days to get its first 1 million cases, said Pieciak, who presented the state’s latest modeling.
“It’s not the explosive growth other states have been experiencing, but new cases are approximately 20% higher this week than they were for the last week of June, which should give us some pause here in Vermont,” he said.
Since declaring a state of emergency in March, Scott has emphasized Vermont will fare best in the pandemic through personal responsibility, not mandates.
“Let’s not make the news with screaming matches caught on video; let’s do things the Vermont way by being role models and leading by example,” he said.