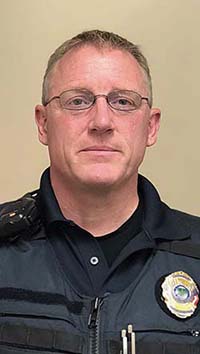 BRISTOL — Bristol residents who wish to learn more about the policies, practices and culture of the Bristol Police Department will soon get the chance to share their questions and concerns with BPD Chief Bruce Nason and other town officials.
The selectboard has not yet set a date and time for the community discussion, but it is likely to take place via Zoom sometime in early or mid-August.
“We should probably do something sooner than later so we can get communication going with the public,” Nason told the selectboard at its July 13 meeting.
U.S. law enforcement has faced intense scrutiny in recent weeks after a Minneapolis police officer killed George Floyd, an unarmed Black man, on May 25. The incident led to widespread protests and reinvigorated decades-old conversations — many of them now under the slogan “Defund the Police” — about reallocating law enforcement funding to non-policing forms of public safety.
In Bristol, where several protests in support of Black lives have taken place, some residents are seeking a public dialogue about policing.
“In light of ongoing nationwide protests and escalating tensions between civilians and the police, it is imperative that we collectively address the issues facing our nation and work towards restoring everyone’s faith in our civic organizations,” wrote Mike and Carolyn Dash in a June 14 letter to Nason and the selectboard. “Disparate racial treatment and the use of excessive force, while not necessarily characteristic of all police departments, nevertheless appear to be systemic issues facing law enforcement throughout our nation.”
As evidence of the state’s systemic racism, the Dashes pointed out that Vermont has imprisoned Black men at a higher rate than any other state in the country. They also urged the BPD to create a training and implementation plan to address racial biases, eliminating inequitable treatment based on race or ethnicity, reduction in the use of force and steps to ensure accountability for officers’ actions.
“While we do not have information regarding demographics of arrests by the Bristol Police Department, it appears as though our police force is not immune to at least some of these systemic issues (see, for example, the current lawsuit alleging the use of excessive force by the Bristol Police Department).”

FEDERAL LAWSUIT
The lawsuit in question stemmed from an incident four years ago, before Nason joined the police department.
In March 2016, BPD Officer George “Randy” Crowe responded to an alarm activation at Bristol Discount Beverage and upon arrival encountered Tyler Westbrook, who lived next door to the business and who had gone outside in his slippers to “check on his friend’s business,” according to complaint later filed in the U.S. District Court in Vermont.
When Westbrook tried to return to his home, Crowe “pointed his pistol directly at Mr. Westbrook’s head” and ordered him to the ground, according to the court document. Westbrook complied and “Officer Crowe kneeled on Mr. Westbrook’s back keeping the gun pointed directly at Mr. Westbrook’s head at point blank range.” Crowe then yelled, “If you’re not going to listen to me, I’m going to make you listen to me!” according to the complaint.
Crowe had not asked Westbrook to identify himself or put up his hands, alleged the complaint. He had not used any de-escalation techniques or commands. “His first instinct and action were the use of deadly force.”
The lawsuit was dismissed this past Monday, July 20 — not because it was found to have no merit but because the plaintiffs, Westbrook and his wife, Piper, decided not to spend any more energy or financial resources pursuing it, Piper Westbrook told the Independent Tuesday evening.
Crowe was listed as the defendant in at least one other complaint about police conduct — a 2014 case in Vermont Superior Court alleging unwarranted search, seizure and arrest. The charges against Crowe were eventually dismissed.
Last October, Crowe was suspended from the BPD, with pay, pending the outcome of a hearing to determine whether he was “guilty of negligence, dereliction of duty or conduct unbecoming an officer.”
Town officials would not say why Crowe was facing possible discipline.
Crowe eventually resigned on Nov. 18, a fact which town and police officials refused to disclose for more than a month, despite repeated attempts by the Independent to get updates on his employment status.
Town officials also refused to say whether Crowe, who had been with the BPD since 1994, had ever previously been disciplined for any reason.

A NEW GENERATION
At last week’s selectboard meeting, Bristol resident Elissa Cobb was hopeful about the prospect of a conversation with what she characterized as a “new” police department.
“Until Officer Nason took charge, I spent many years feeling uncomfortable in my own town with the police department we had before,” Cobb said. “I won’t go into a lot of those reasons right now, but I was so excited to have a change. Now … we have somebody that we feel is open enough to have a conversation with us about the use of force, about how police officers are trained, about what sorts of things are being added to that training regimen.”
Nason, who in June released a public statement proposing a series of community meetings about policing, views the upcoming discussion as a way to get input from the residents about what they feel the direction of the police department should be, he said at last week’s selectboard meeting.
The BPD is currently reviewing and updating its policies and procedures, including those for the use of force, he said.
“Some of that’s going to take a little time, but I’m willing to share what we have at this time, and let you know what we’re working toward. I’m open to just about anything.”
In the meantime, Nason encouraged anyone who has questions to reach out to him via email (Bruce.Nason@vermont.gov) or phone (802-453-6844), or “stop me on the street when they see me walking. I’m happy to answer whatever questions I can.”
Last March Bristol Police District voters approved a BPD spending of $452,370 for fiscal year 2020-21, a 3.5% decrease from the previous year.
Personnel costs account for roughly three-quarters of that budget, including salaries, overtime, retirement, and health and other insurance.
The highest among the remaining budget line items include:
•  $47,510 for facility expenses.
•  $12,500 for the Capital Vehicle Reserve fund.
•  $9,500 for communications.
•  $9,400 for property and liability insurance.
•  $7,500 for vehicle gas and oil.
The budget also sets aside $3,000 for the Capital Equipment Reserve fund, $2,000 for training and $500 for equipment.
“It is clear … that civilians and police officers alike still have a lot of work ahead of them to combat these pressing societal ailments,” the Dashes concluded in their letter. “We are confident that by addressing these issues together, Bristol will be a better community and one that is doing its part to address deep-seated systemic inequalities that have disadvantaged, disillusioned, and at times destroyed so many.”
Reach Christopher Ross at christopherr@addisonindependent.com.