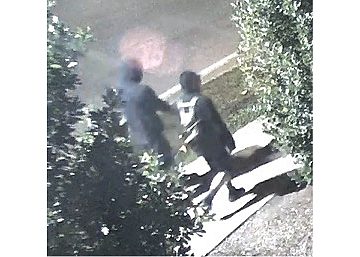 A security camera in downtown Middlebury caught this image of two males who police want to question in connection with a case involving hateful graffiti.

Middlebury police are asking for the public’s help in looking for someone who painted hate speech on sidewalks in Middlebury late Wednesday night or early Thursday morning.
Shortly after 5 a.m. on Thursday, July 16, several hate symbols were found painted along the Cross Street Bridge, near the Ilsley Library, and along the route into the Marble Works, including on the footbridge. Images seen by the Independent showed spraypainted messages of “WLM” with one accompanied by a swastika.  After documenting these symbols the town of Middlebury began the process of removing/covering them.
Police initiated an investigation immediately on discovering these symbols. The department is interested in identifying two white males, wearing hoodies, one carrying a light-colored backpack. Surveillance cameras captured their images while they were passing the town offices from Cross Street to the roundabout at 12:48 a.m.
The males are considered persons of interest in this investigation and the police are seeking to identify and interview them.
Police Chief Tom Hanley emphasized in a press release that “this is a hate crime.”
Anyone having any information on who these two are, or who witnessed anyone painting graffiti in that area is asked to provide that information to the Middlebury Police Department at 802-388-3191 or by contacting Officer Chris Mason at cmason@middleburypolice.org.
A security camera in downtown Middlebury caught and image of two males who police want to question in connection with a case involving hateful graffiti. A different security camera in the Marble Works captured a few seconds of video of the same two makes walking through that neighborhood. Both this image and the video were posted on addisonindependent.com. Click here to see the video.
Images are also posted on the Middlebury Police Facebook page.
Brian R. Carpenter, chair of the Middlebury selectboard, released the following statement on behalf of the full board:
“The selectboard of the town of Middlebury strongly condemns the heinous acts of vandalism desecrating public ways downtown with offensive racist and anti-Semitic graffiti. These actions are depraved and cowardly. They are hate crimes, and our town must not tolerate such behavior. Therefore, the board commits itself to use all the powers of government under its jurisdiction to apprehend the perpetrators and prosecute them to the limit of the law. The selectboard also expresses its sympathy with the intended victims of these actions and stands in solidarity with them.”
ANOTHER CASE
Middlebury police on Wednesday announced they were already investigating an on-going issue involving a male verbally assailing others with racist comments. Authorities are looking for people who have been subject to such behavior. Read more about that case here.
This story was updated to include the types of hate speech used in the graffiti and to add the statement from the town selectboard.