Matt Dickerson: One month, one river 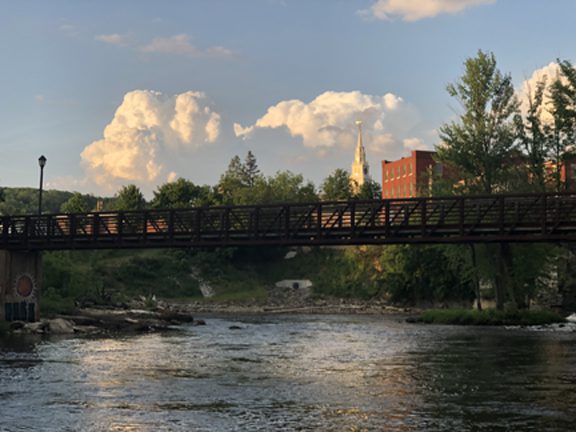 Matt Dickerson: One month, one river

I’ll admit to distrusting my memory these days. (What day of the week is it?) Last week seems like months ago, and May seems like a year ago. The middle of March might as well be several years ago. And 2019? Could be a different lifetime.
So when I say it was only a year ago that Otter Creek was running exceedingly high all through June and most of the summer — and that I barely got out to fish it because of those inhospitable water levels — I say that without the greatest confidence in my memory.
But I’m saying it anyway.
Because this year has been a whole different world.
Not that the start of June 2020 was unusual in terms of fishing. For the first week of the month, water conditions on the creek below the falls were just about perfect — and quite similar to many previous years (though 2019 wasn’t one of those similar years). Early June is my favorite time of year for fishing Otter Creek, at least with dry flies. Three evenings in a row, I stood on the edge of the river at dusk down in Frog Hollow a couple dozen yards below the foot bridge, fly rod in hand. Pink thunderclouds stacked up in the sky above the falls and above downtown Middlebury, but the promise of rain remained unfulfilled.
Mayflies and small dark caddis flies were hatching in good numbers, and the trout were feeding voraciously. I could see rising fish all around: out in the current, in the slack water, in the foam of the eddies, and especially in the seams where current and slack water meet.  I managed to fool several of those trout — both brown trout and rainbow trout — with imitations of the food they were feasting on.
Then life interrupted my evening excursions. Suddenly it was Father’s Day. Two and a half weeks had passed. Not a terribly long time, really. I don’t expect a river to change dramatically in such a short period. But it had. A week of August temperatures in early June combined with a lack of rain will do that to a Vermont river. Where I had recently been wading in calf-deep water, I could now step out onto dry gravel. No fish were rising, either.
The moment my sandaled feet stepped into the current, I knew why. The water temperature felt much too warm for cold-water-loving trout to be active. It felt more like stepping into a swimming pool than into a Vermont river.
Time for a change in tactics. It was a bass night, not a trout night, and also a night to fish below the surface. I snipped off the dry fly, tied on a big heavy black Wooly Bugger, and started working my way upriver toward the falls. No action came to me below the island so I kept moving up. At the point of the island, casting cross-current toward the ledge below the Marble Works, I might have gotten a soft hit. But only one, and whatever it was didn’t hit again. Not until I got to the upstream side of the island and started casting upriver into the stretch of swifter current below the plunge pool did the bass start hitting.
The first one wasn’t too big, though even a small smallmouth bass can put up a good fight, especially in a swift current.
I got a couple more hits, but no consistent action. The sky and water were getting darker so I switched to a large fly with a lighter color: one I tied with some tan zonker strips and white marabou to resemble a leech or baby sucker.  I moved up a little further and dropped my heavy fly into some deeper water. I only got a quick glimpse of the fish that snatched my fly before it tossed its head and snapped my line. My heart rate went up a few beats per minute. Hoping to get my nice fly back — and also to catch the fish that had stolen it — I tied on a new fly and took a few dozen more casts in that pool. The effort was to no avail. The fly was lost.
Trying to get my line down into the deep water, I lost another fly, this one on the rocks. I tied on yet another and worked around the rocks right to the base of the falls. It took about four or five minutes working the different pockets of the plunge pool to hook the next fish. Maybe it was the size and fight of the fish, or the current below the falls. Or maybe I was just being too careful, so I wouldn’t lose another fly. It took at least as long to land it once I hooked it as it had taken to hook it.
The sky was dark, but not so dark that I couldn’t see the fish as I led it to hand, held it a moment, and then gently released it back into creek water that felt too warm and too low for June on Otter Creek. Yet it still felt nice to stand in the current, in the mist of the falls, holding first a fly rod, and then a fish. As I walked back to the car, with both my fly box and my heart a little lighter, I tried to cement the scene into my memory so that in June of 2021 — whatever it holds, and however many decades it takes us to get there — I’ll have some context for comparison. Not that any of us will ever forget 2020.  However much we want to.