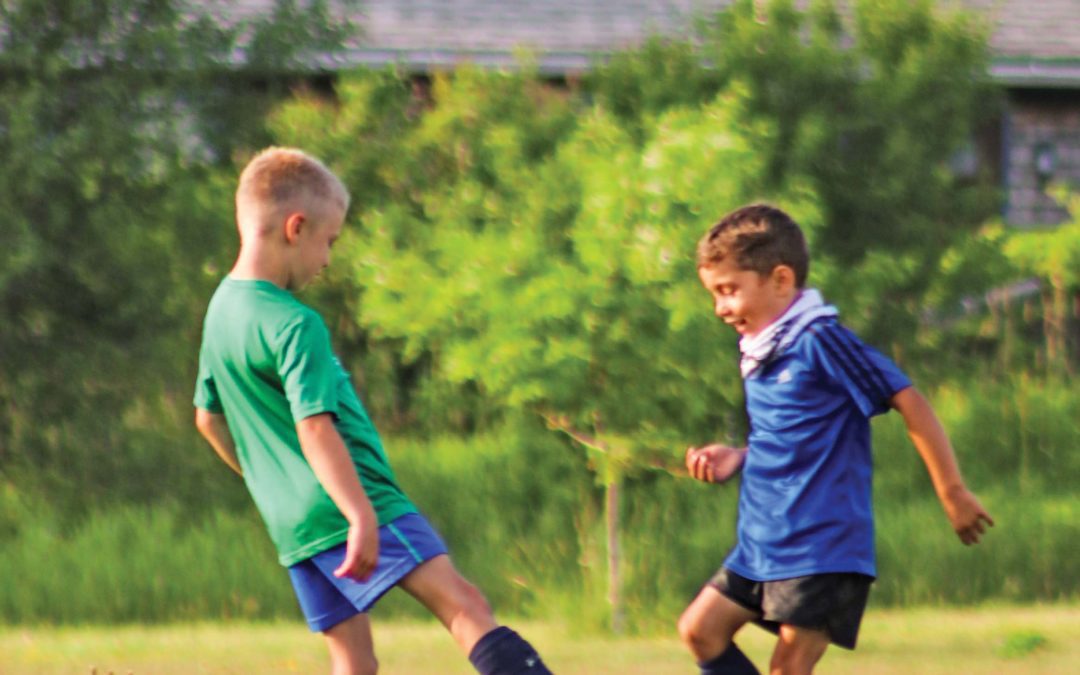 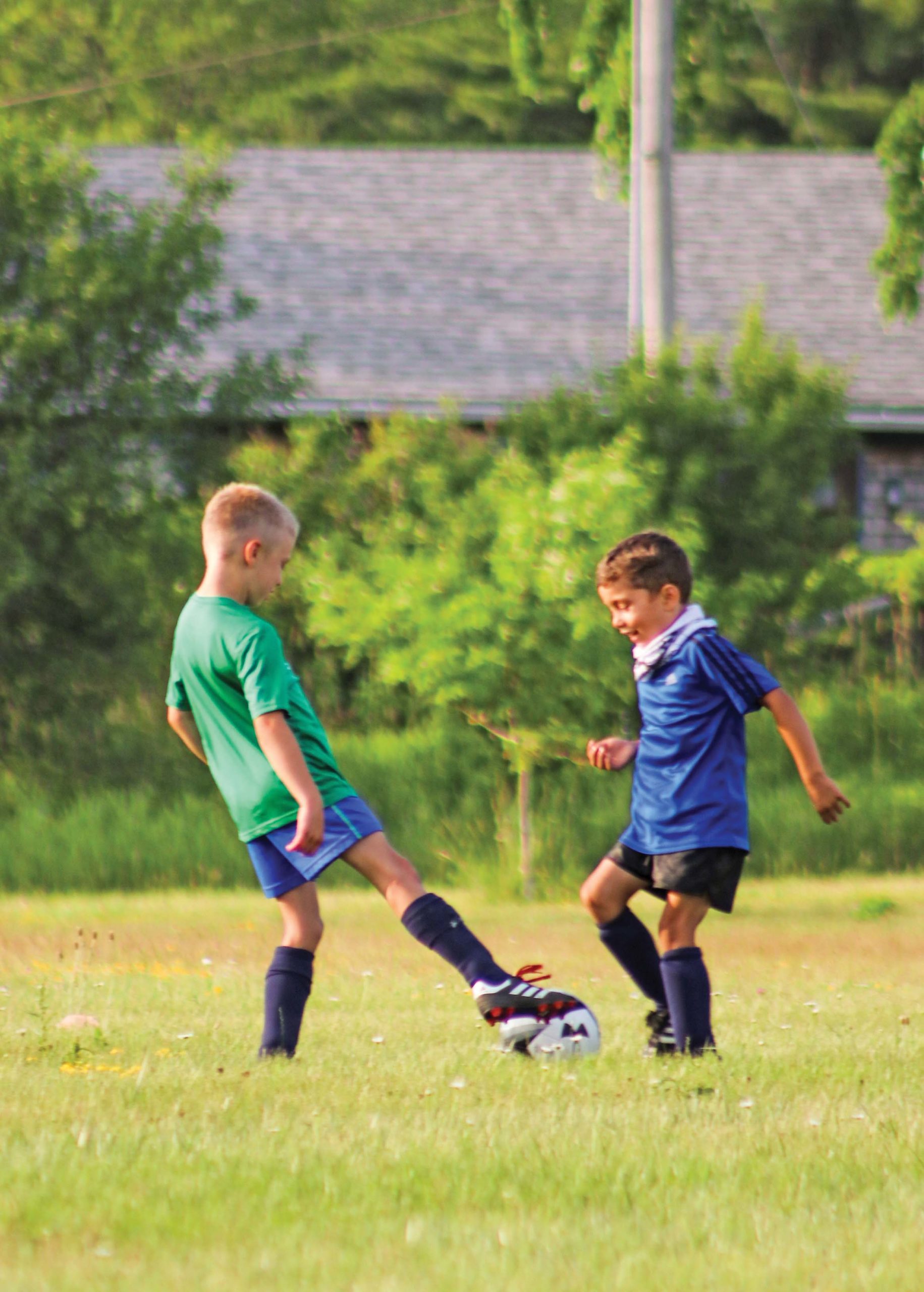 SILAS AUDY, LEFT, and Simon Kruse practice their footwork during a long-awaited Addison United Soccer Club practice this past Thursday in Monkton. The soccer club is offering the program for free this season so that participants won’t feel compelled to attend if they feel sick.
By Polly Heminway

ADDISON COUNTY — Addison County youth are seeing a different look at their camps and sports this summer. There are no field trips for day camps, no fighting for draws in lacrosse, only small games in soccer, and no spitting on the baseball diamond.
But there are still opportunities for exercise and fun.
“There is some understandable hesitation to get back out and interact in this way,” said Booth Hodde, who is running Middlebury Youth Lacrosse Club this summer. “So it’s obviously an optional activity and we’re going to take every precaution that’s recommended to keep everyone safe, but also make sure it’s a great time for the kids.”
To hold camps, practices and games during the COVID-19 pandemic Middlebury Youth Lacrosse, Middlebury recreation camps, Babe Ruth League baseball, Addison United Soccer Club and other groups must carefully follow guidelines set by each sport’s governing bodies in addition to obeying rules set by the state of Vermont.
These guidelines, intended for Vermont residents and those who meet the cross-state travel guidance, include daily health checks, mask-wearing when not partaking in strenuous activity, discouraging full contact in sports, not sharing equipment or belongings, and not gathering before or after team events. More details are online at accd.vermont.gov.
Dustin Hunt, the superintendent for Middlebury Parks and Recreation, said that although the town had to cancel gymnastics, golf, basketball, soccer, outdoor adventure and tennis camps, they are still running modified versions of the Middlebury Marlins swim team and the Camp Kookamunga day camp.
“The day camp has a strict limit of 32 kids broken into two smaller groups of 16,” Hunt said. “Both groups are housed at the sports center with one group using the rink area and the other group in the new addition upstairs.”
Hunt said that campers are provided with masks and must complete a health questionnaire and daily temperature check before being admitted to camp. Each camper is also given a taped area on the floor, six-feet apart from others, where their stuff is to remain throughout the day.
In an effort to bring some normalcy to the campers despite needing to avoid field trips on buses Hunt said, “We have instead brought instructors on board to teach archery and taekwondo to small groups of campers.”
Matthew DeBlois is principal of Vergennes Union Elementary School and also a Babe Ruth League baseball coach. He is pleased to announce that Babe Ruth League teams have been practicing and playing games for a few weeks now. The league has guidelines for social distancing that lean heavily on state regulations.
Their tentative 15-game schedule was decided after DeBlois and other coaches met with interested families.
“We sat down with all the kids and families with masks at a distance, and explained the need to wear masks, social distance and the risks involved,” he said.
Teams are following the appropriate safety measures to ensure health, DeBlois said. “Masks are worn when in close contact during all practices and kids are not allowed to share equipment like helmets, catcher’s gear, gloves, etc.”
This can present some challenges peculiar to the sport.
“At this age, not everyone has their own set of catcher’s gear, for example, so it can be tricky,” DeBlois said.
The team avoids using the dugouts and do not spit while playing. Fans are allowed to watch from a distance and are asked to follow standard social distancing guidelines.
As with the other kids activities, the Addison United Soccer program, which began practices last week, is following the strict guidelines put in place by the Vermont Department of Health.
Addison United Director Chris George says that this summer the program will run free of charge. This decision was made out of respect for their new COVID-19 policy of encouraging players and parents to participate as much or as little as they feel comfortable; without a fee some may be more willing to skip a day if they don’t feel comfortable with their own health or the overall conditions.
“We didn’t want to ask for money and then have participants feel obligated to stay if they felt uncomfortable,” George explained.
George also mentioned that due to the unpredictable nature of the season it didn’t feel right putting a price on the valuable playing time that the young athletes would experience.
Players are asked to wear masks to and from their cars but don’t have to during play. Participants also mush answer a number of health related questions and take their temperatures before practices.
Parents and guardians who have chosen to be spectators have been careful to watch from a distance and have been willing to work with coaches so that this program can happen.
George is especially grateful for the people and town of Monkton, because the town made its playing fields available for soccer practices when other school property was not available this summer.
“We wouldn’t be able to play right now if it wasn’t for Monkton stepping up and volunteering this space,” he said.
Middlebury Youth Lacrosse Club returned to play on July 2 and plans to run Thursdays from 5:30 to 7 p.m. until the end of July. Hodde said the club is following state and U.S. Lacrosse safety guidelines.
He imagines they will also avoid playing full-field, most likely scrimmaging two vs. two, or three vs. three to allow for more space between players.
“There are some structural changes we’ll have to make to the way we play,” Hoode said. “For example face-offs, where there is a lot of close contact, I don’t think we’ll be doing those. We may not have contested ground balls. If the ball goes down we alternate sides.”