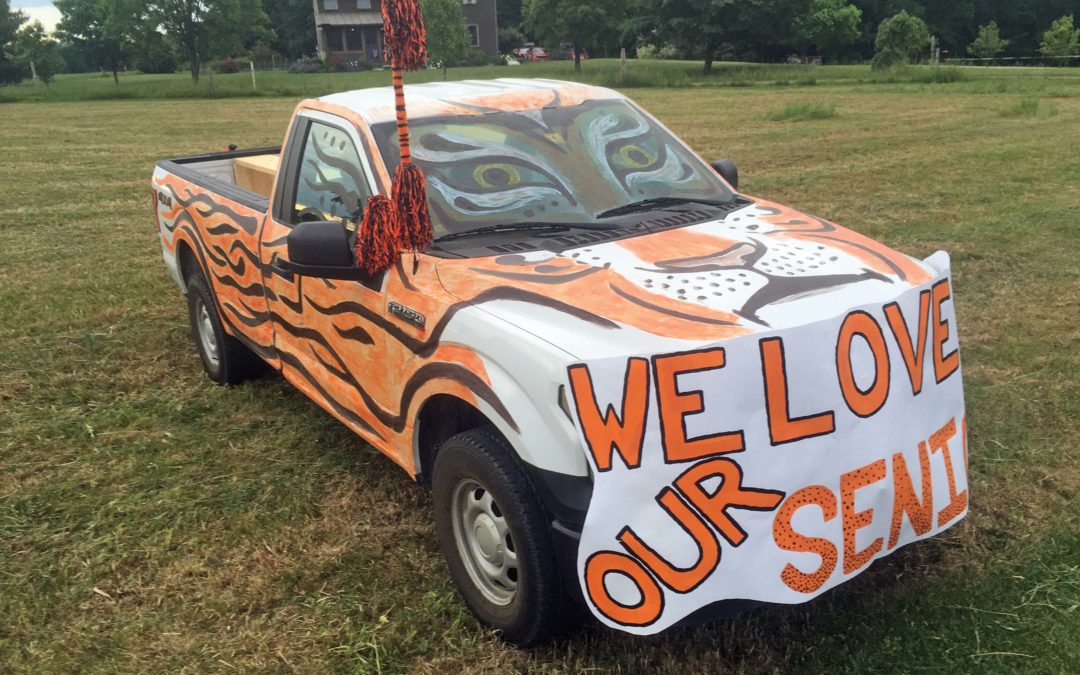 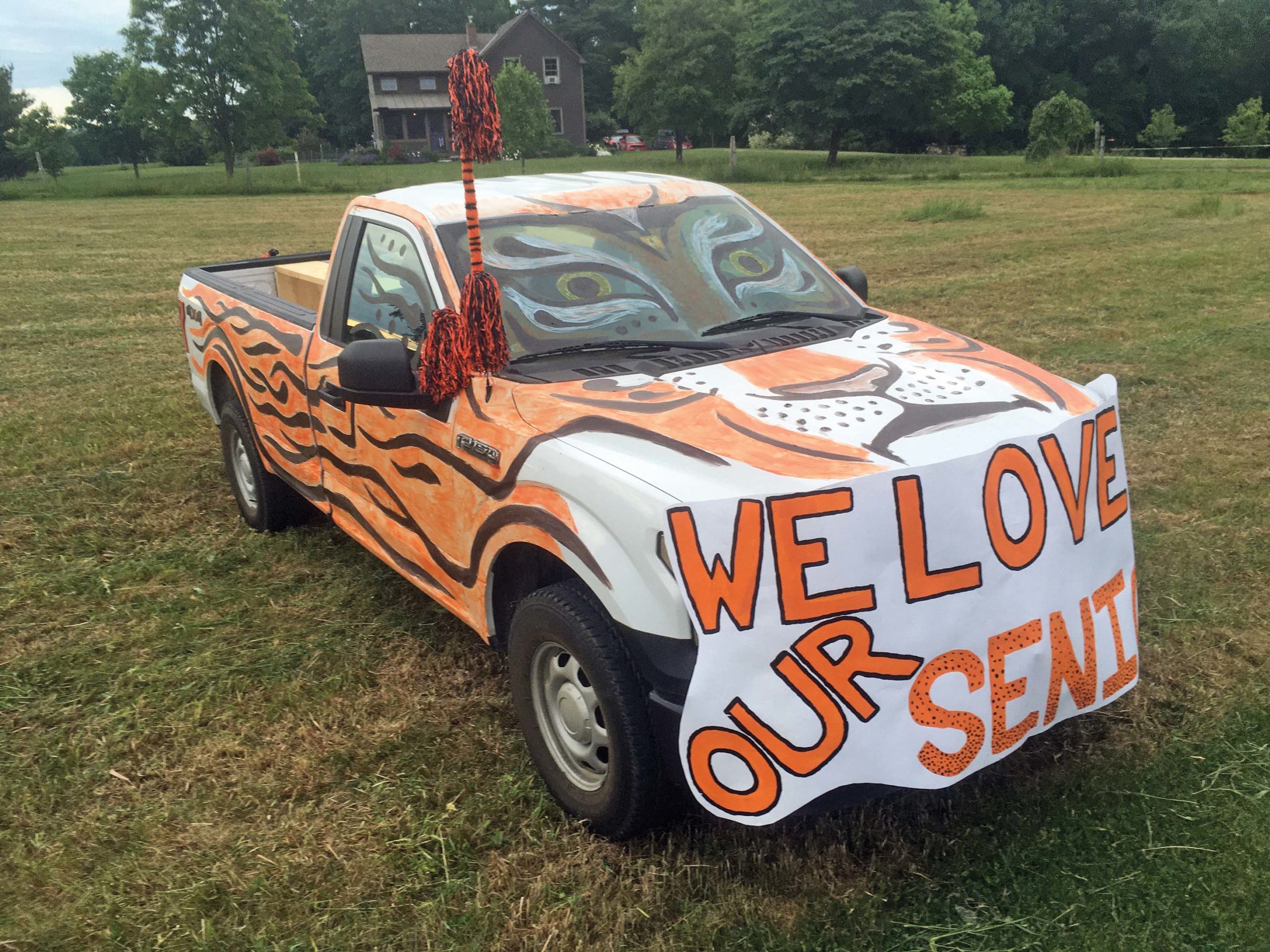 SOCIAL DISTANCING REQUIREMENTS for the COVID-19 pandemic forced a new kind of graduation ceremony at Middlebury Union High School and other secondary schools throughout the land. Students on Saturday rolled up in decorated vehicles to pick up their diplomas from a makeshift stage in front of the MUHS building.
By John Flowers

MIDDLEBURY — Four fruitful years at Middlebury Union High School this past Saturday came down to one last meander down the horseshoe driveway fronting a building that had become home away from home for the more than 127 members of the class of 2020.
It was a chance to drive off into the sunset, and each student took full advantage this past Saturday.
One-by-one, they rolled up to a makeshift stage in sleek coupes, revving Jeeps, powerful trucks and classic autos, most of them decorated with the black-and-orange colors of MUHS and bearing bright signs announcing each matriculating senior.
After receiving a hard-earned diploma from Addison Central School District officials, every newly minted graduate posed for a photos and then zoomed (no pun intended) off into the next chapter of their lives.
A bittersweet sendoff made necessary by COVID-19. But there were only smiles during a crisp, sunny June 13 in Middlebury.
“It’s crazy,” Hunter Heffernan said after his achievement had been captured on camera. “For not having a ‘regular’ graduation, it’s still pretty cool.”
The event was cool, and so was the temperature — 50 degrees, which forced some spectators to rediscover their warm coats.
“It feels great,” Levi Gordon said as he proudly clutched his diploma. “I kind of liked it more. I don’t like to sit down for a long time. It was fun to decorate the car.”
Students appreciated the lengths to which ACSD officials went to give them a special sendoff after a final semester marked by quarantines, distance learning, no spring sports and no senior prom.
“It was definitely not the way I expected, but I think they did a lot for us,” said Alexia Huestis, her voice brimming with emotion.
Organizers of the ceremony divided the graduates into four groups — each of which moved out, one after the other, as a miniature convoy through the MUHS student parking lot to the E-wing of the high school complex. Groups of supporters, waving pompoms and signs, cheered each vehicle in the spaced-out procession.
It proved a feast for the eyes.
The graduates and their families went all-out in decorating the vehicles with ribbons, signs and other MUHS-related paraphernalia. The tiger, the MUHS school mascot, proved the most popular motif; some vehicles sported ears, tails and stripes.
But in the end, it was about achievement during what was arguably the most difficult four-month stretch any senior class has seen during the past half-century. The 2020 commencement speeches reflected the COVID challenge and how the school community had answered it.

STUDENT SPEAKERS
Salutatorian Emily Pecsok not only referenced COVID-19 in her speech, but also racial injustice most recently epitomized by the May 25 murder of George Floyd, a black man, by a white Minneapolis police officer.
Pecsok expressed frustration with the lack of momentum that past crusades for social justice failed to achieve.
“Black Lives Matter has been a movement for nearly seven years, but we, as a country, are in the same places as we were before, because for years, instead of acknowledging the issues for what they are — systemic racial biases that aid white people and oppress all people of color — we shared an Instagram post and hoped that would solve it,” Pecsok said. “The freedom from societal obligations many of us have been granted by this pandemic has allowed us not only to share, but also educate ourselves, donate and demand specific, discernable reforms.”
But she said she’s confident about the momentum that has built in wake of the George Floyd tragedy.
“Over the years and around the world, we have seen how action can create revolutions, as long as we’re willing to get our hands dirty,” Pecsok said. “We need to use whatever privilege we have to stay aware of and engaged with all of the injustices in our world. Our work over the last 13 years has led us to getting an amazing education. The power and privilege we are obtaining along with these diplomas can be used to create real, meaningful change in the world. And I know we will use them for good.”
Valedictorian Nico Brayton celebrated the connections that MUHS students were able to forge during the past four years. Those connections, he said, ranged from a celebratory scrum following a basketball team win to shared learning experiences.
“And when you don’t have moments of shared emotion like we all had at the student basketball game back in February, it’s easy to forget that we all have the same emotions, that we are all fully and equally human within our different skins, that everyone deserves to breathe,” he said, echoing the words Floyd uttered as he was being suffocated under the knee of the police officer.
Brayton urged his classmates to hold fast to the connections they’ve made, and create more of them as they enter the next phase of their lives.
“There are only a very few challenges that will inevitably face each and every member of our class as we go our separate ways,” he said. “One of them, unquestionably, is maintaining the civility, empathy and respect our connections at MUHS gave to us. If we wish to live in a country in which those sworn to protect share these skills, we can’t ever forget those impossible moments we had here. We’ll have to create them for ourselves. Most of all, we’ll need to recognize that, as humans, we are capable of sharing that connection with anyone on this planet, regardless of what our systemic social instincts tell us.”
MUHS Principal Bill Lawson, in his final commencement address, praised the class of 2020 for adapting to the many obstacles COVID-19 threw in his way. These special challenges — along with the Black Lives Matter movement that many students have adopted — have made this year’s graduates more resilient, open-minded, principled and caring, according to Lawson.
“These skills should serve you well as you strive to make your lives and the lives of those around you more inclusive, safer, and filled with hope,” he said. “You have received much love from the support of your families, friends, school personnel, and community members. Walk this gratitude forward as you promote change and a sense of community in your continued life’s journey.”
Lawson briefly acknowledged his own exit — into retirement after 25 years helming the school — in concluding his speech.
“The class of 2020 and I, despite our significant age gap, share a commonality,” he said. “Together we are stepping away from MUHS, the community we have shared for many years. As we move on to uncertain destinations and tantalizing new possibilities, let’s together move forward with grace, dignity, and love.”
Reporter John Flowers is at johnf@addisonindependent.com.