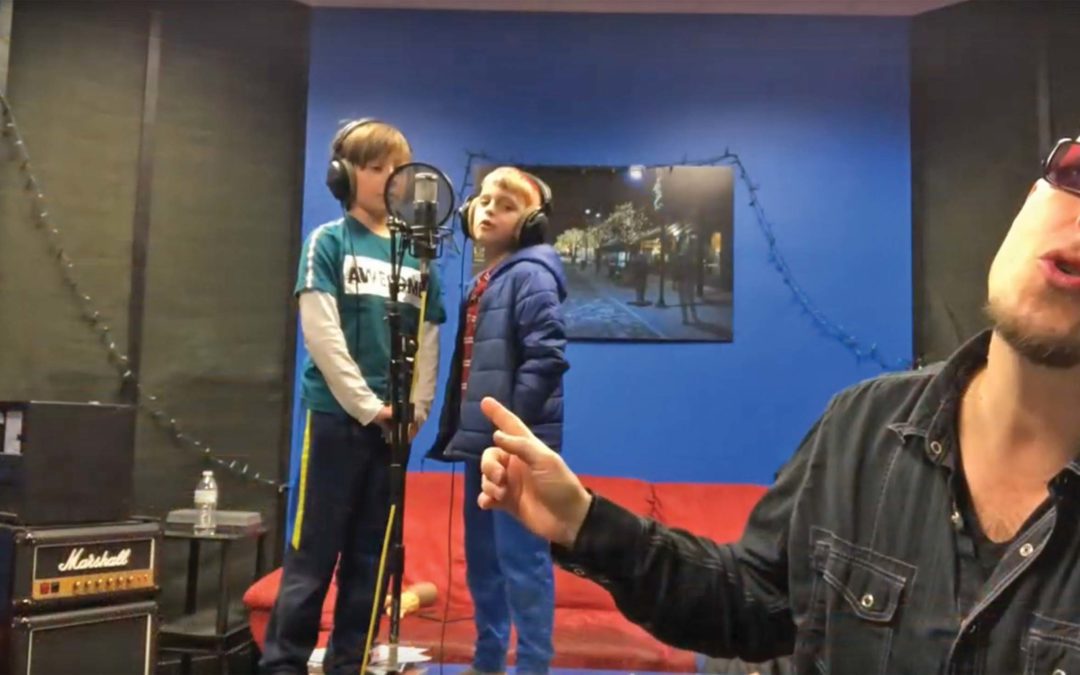 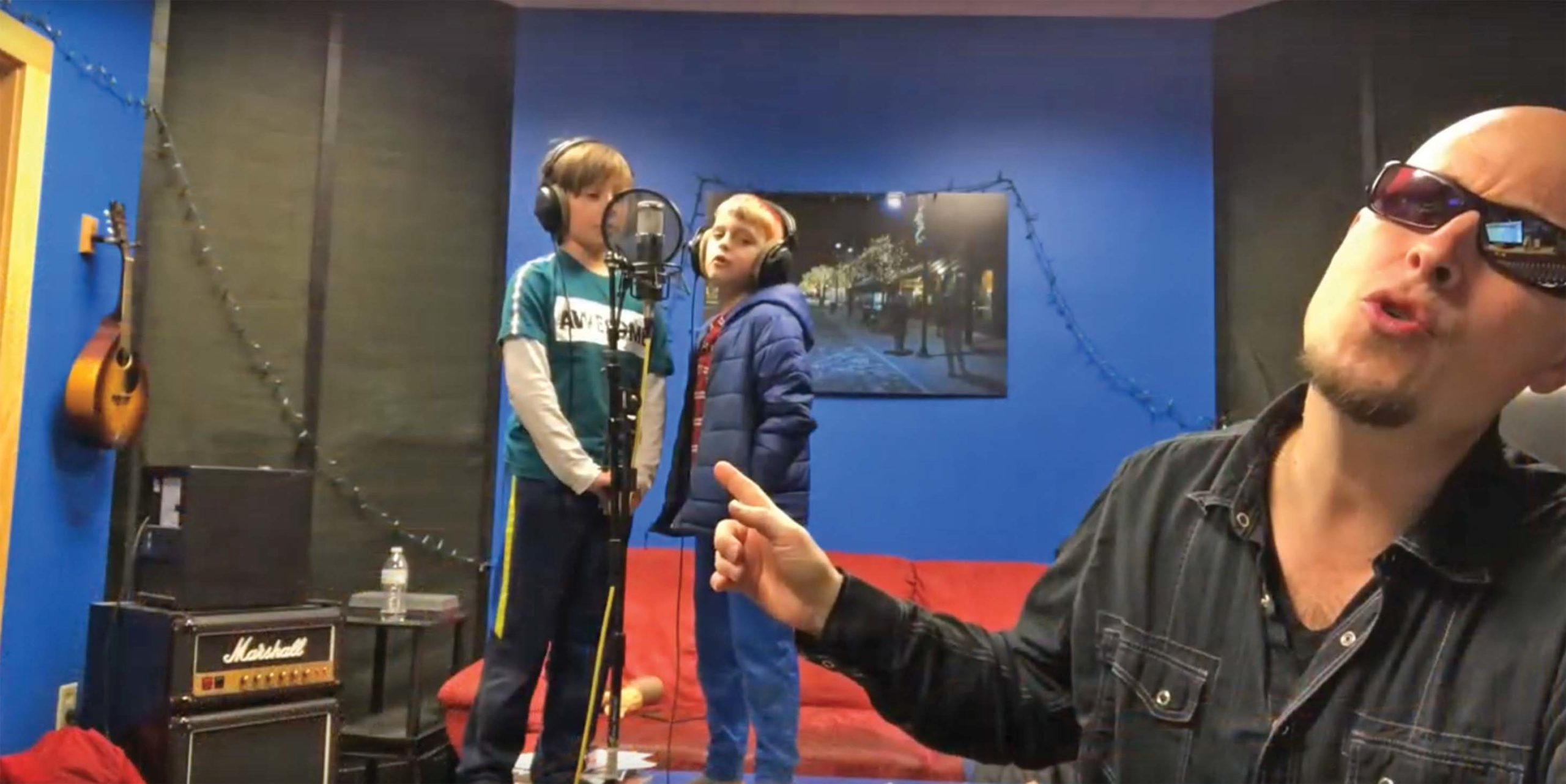 LOCAL ROCKER CLINT Bierman (right) recently wrote two humorous songs about remote learning, and shot music videos for them. Bierman’s sons, Ty (left) and Sam, sang on the chorus for “Home School,” which is told from a home-bound parent’s point of view.
By Christopher Ross

I would love for this (video making) to continue, because it gives me a massive creative outlet. Learning a new skill has been a gift. Finding the creative way to stay creative is my whole thing.
— Clint Bierman

When Clint Bierman writes a new song, he tests it out on his sons, Ty and Sam. “They’re the first people I go to,” the guitarist and vocalist for The Grift said in a recent phone interview.
Fourth-grader Ty and second-grader Sam attend the Bridge School in Middlebury, where Bierman drops them off and picks them up every day — when there’s not a pandemic. “After I write something, I’ll play (a recording of it in the car) on the way home (to Bridport) from school, and I can really tell if something’s good, based on their reaction,” Bierman said.
How can he tell?
“They’ll sing it. If we get out of the car and like 30 minutes later they’re singing it, I know it’s good. They have no filters for it so they just distill it down to what’s catchy to them.”
And if it’s … not so good?
“They’ll say it: ‘This is bad,’” Bierman said, laughing. “Which is why they’re such a great barometer, because they don’t care about my feelings. ‘It’s just Dad. We don’t have to water it down.’” Sometimes those moments can sting a little bit, Bierman acknowledged, but in the end he finds that he agrees with them.
Recently, the young critics have approved of a slew of new songs — and starred in two of them. It all started when Town Hall Theater in Middlebury asked Bierman to whip something up for its online video series, the “Quarantine Sessions” (townhalltheater.org/event/quarantine-sessions).
“I was just starting to homeschool Ty and Sam and I thought, this is exactly my life right now, so I’m going to write a song about it,” Bierman said. Parents everywhere will readily identify with the lyrics:
Home school,
it’s getting hard to keep my head cool.
My house has turned into a cesspool
and the prospects seem bleak.
Oh, home school,
my kids keep telling me I’m uncool.
Odds of surviving seem so minuscule,
and it’s only been a week.

Bierman was so pleased with the online response to the song that he decided to make a music video for it. “I didn’t know how to make music videos,” he said. “I just took video on my iPhone and made it in iMovie.”

For his next quarantine song, Bierman told the homeschooling story from the perspective of his son Sam, who’s not a fan of school at the moment — no matter where it takes place. “Not That Bad” opens with Sam, 7, lamenting that learning at home isn’t any better than it is at school. Eventually he comes around … sort of:

Bierman wrote the music and lyrics, which Sam edited and sang. “We went into the studio and Sam just crushed it,” Bierman said. “His vocal is so good, and I thought, ‘This is gonna be gold, I gotta make a video for this.”
Ty shot a lot of the footage for that video, and father and sons worked as a kind of crew together. But Ty and Sam weren’t quite as enthusiastic about the slow process of making music videos as their dad was. “By the end they were so over it,” Bierman said, laughing. “It eventually got to the point where I just had to pay them.”

Not long afterward, the folks at Lawson’s Finest Liquids, a microbrewery and taproom in Warren, where Bierman and his Grift bandmate Peter Day had been scheduled to play a series of summer gigs before the pandemic hit, asked Bierman for suggestions about how they could support the quarantined local music scene. Bierman suggested a video, which Lawson’s then happily commissioned.
“That’s when I actually bought video-making software and spent like 25 hours watching tutorial videos,” Bierman said. The video for the Grift song “Stay Home, Drink Beer” can be found here: youtube.com/watch?v=FGh3pNugIuo.
Then Middlebury College came calling. “The Grift has played the past 14 reunions there,” explained Bierman, a Middlebury College grad. “They canceled it this year, but they were like, ‘Can you guys put something together for everyone who was supposed to come back?’ We wrote a song last night, and we’ve got the idea for the video, so I’m really stoked.”
Now he’s wondering if commissioned videos could provide a modest source of income while the Grift are stuck at home, waiting out the coronavirus.
“I would love for this to continue, because it gives me a massive creative outlet,” Bierman said. “Learning a new skill has been a gift. Finding the creative way to stay creative is my whole thing.”
Bierman’s wife, Lauren, has also forayed into videomaking. Her adaptation of Journey’s “Don’t Stop Believing,” dedicated to the folks at EastView at Middlebury, where she works, can be found here: youtube.com/watch?v=AIoIN3x1_Cg&t=31s.
Has their parents’ increased notoriety made an impression on Ty and Sam? Their dad laughs. Over the phone one can almost hear Clint Bierman shaking his head dolefully. “They’re like, ‘2,200 views, Dad? Fail!’ They’re used to like 12 million views on a video, so for them it’s like, ‘What’s the point?’”
He’s still “lame Dad,” he said, laughing again.
“But for me it’s been super-exciting. In live music you get that immediate response, you get that visceral feeling. Now, (responses to videos are) like that delayed sense of gratification. I’m still getting the joy and the buzz, it’s just takes longer to get. It’s is a funny concept.”