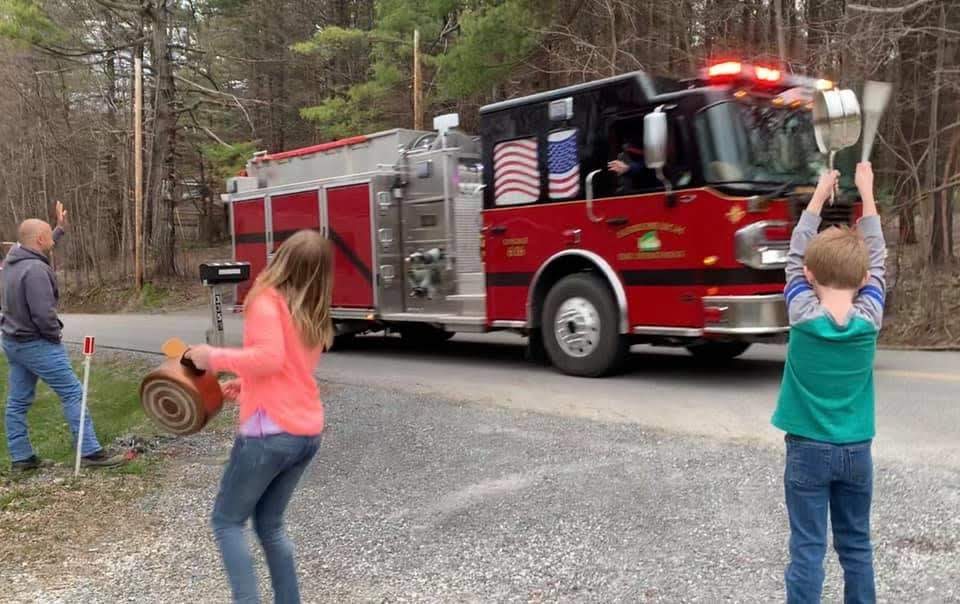 KIZZIE AND VANCE Carpenter wave at a Ferrisburgh Fire Department truck as it passes their Shellhouse Mountain Road home during Wednesday evening’s Clang and Bang Parade in Ferrisburgh. The parade traveled along 10 town roads.
By Andy Kirkaldy

FERRISBURGH — Sirens and horns blared and lights flashed throughout much of northern Ferrisburgh during the evening of Wednesday, April 29, but even though the loud cavalcade came in response to an emergency — not a fire or a car accident, but a global pandemic — it was welcomed with smiles, waves and even more noise.
A half-dozen Ferrisburgh Fire Department and rescue vehicles, plus a Vergennes Area Rescue Squad ambulance, led a parade of cars and SUVs that Ferrisburgh Selectboard Chairwoman Jessica James said probably peaked at a dozen-and-a-half.
The parade, organized largely by the Ferrisburgh Fire Department, was the latest in the town’s occasional “Clang-and-Bang” series intended to lighten residents’ mood as they follow the governor’s stay-at-home order during the COVID-19 pandemic.
It followed a route that included stretches of Dakin, Shellhouse Mountain, Fuller Mountain,
Four Winds, Hollow, Greenbush, Little Chicago, Walker, Cross and Sand roads, plus Quaker Street and a small run on Route 7.
James said all along the way residents came out to greet the parade.
“It was fun. It was great. People really enjoyed it,” she said. “I think people were really happy to get out.”
With so many vehicles and such a long route, James said the evening felt like an event, possibly also because it has been and will be just an occasional parade in the rural town — officials are looking at one in West Ferrisburgh on Mondy, May 4.
“It was definitely a parade, and people were coming out of their houses and cheering,” she said. “It felt like it should. People were spirited. People were saying thank you. People were holding signs, making noise, playing music, just acting together and being silly. It just felt really good. It was just a really spirited and uplifting time.”
James had high praise for Chief Bill Wager’s Ferrisburgh Fire Department for staging the event.
“It’s all the fire department. I just share the information. I don’t make the routes up or anything. I just ask that they involve certain communities, and they’re going to hit West Ferrisburgh next,” she said.
The parades serve a dual purpose for the department, James said — they provide valuable training time for department members that is not available during the pandemic, other than a few webinars.
“They want to get the trucks out,” she said. “The firefighters can’t do any of their training right now. They’re actually getting their training in for driving.”
James foresees the parades continuing “as long as the stay-at-home order is in effect,” but she is not sure how frequently. She said the selectboard will rely on input from the fire department.
“That’s a good group of people,” James said. “It’s up to them.”