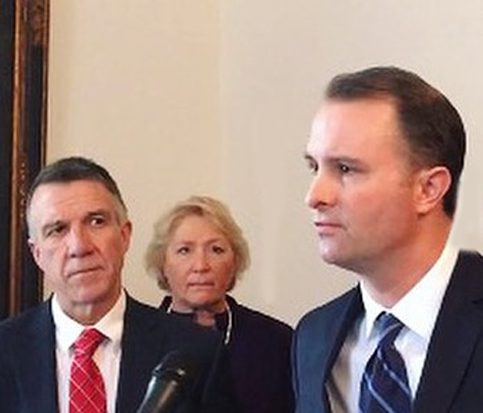 “If a person or business is asked to comply and they do not, then there may be enforcement action.”
— Vergennes Police Chief George Merkel

MONTPELIER — Vermont Attorney General T.J. Donovan late on Thursday announced his office would be working with Vermont State Police and local police and sheriff’s departments to enforce Gov. Phil Scott’s March 13 social-distancing order.
According to Donovan’s directive, his office can assess civil fines of up to $1,000 a day and criminal penalties of up to $500 and six months in jail for businesses and individuals that fail to follow the governor’s order, which is designed to slow the spread of the coronavirus.
The statement Donovan released read, in part:
“The Attorney General’s directive instructs law enforcement who encounter noncompliant businesses or individuals to provide education and request voluntary compliance. If noncompliance continues, law enforcement will report those issues and the Attorney General’s Office will work with law enforcement to develop an appropriate response.”
Donovan issued his directive after two Thursday conference calls with police chiefs and sheriffs from around Vermont. Donovan led one call, and Vermont Public Safety Commissioner Michael Schirling led the other.
Vergennes Police Chief George Merkel and Middlebury Police Chief Tom Hanley late this week each shed light on how the new directive would work on the ground.
Local officers will not write tickets, they said, but in cases where businesses or individuals do not respond to polite requests local departments or Vermont State Police will forward information to the attorney general’s office.
There the decision will be made whether citations or charges will be filed, they said.
Merkel emphasized that local law enforcement officers remain hopeful that encouraging cooperation will be all that is necessary.
“Now if a law enforcement officer sees someone failing to follow that instruction, of course the first thing we’re going to do is ask people to comply. In these times we do not want to take enforcement action on people that are not compliant. However, if a person or business is asked to comply and they do not, then there may be enforcement action,” Merkel said.
“And if people don’t comply we will do that. But it’s not what we want to do. We understand these are tough times for everybody.”
According to the Department of Public Safety website, violations of Scott’s order include lodging properties accepting reservations online or from COVID-19 “hot spots,” businesses remaining open in person, restaurants serving onsite, and scheduled gatherings of 10 or more people.
Hanley said citizens who know of individual or business social-distancing violations can call their local law enforcement agencies or use the “Executive Order Reporting Tool” that can be found online at dps.vermont.gov by scrolling down.
“There’s two ways they can do it. They can call law enforcement, or they can do it themselves,” Hanley said.
If local law enforcement investigates an issue that can’t be resolved through cooperation, Merkel said it will be forwarded to the attorney general’s office. He said local departments would also be asked to look into complaints filed through the public safety website.
“The reports will be vetted, and the reports will be forwarded to a law enforcement agency. The law enforcement agency will go and investigate it and probably ask the people respectfully to adhere to the directive,” Merkel said.
If the attorney general’s office determines a complaint filed by a citizen or a local department has not been resolved, then it can act, Hanley said, with a cease-and-desist order following the local investigation.
It can escalate from there to a court order, and then finally a contempt-of-court order, with the last two steps carrying the penalties.
“It’s a four-phase process,” Hanley said.
Merkel emphasized that all should follow the governor’s social-distancing order.
“The governor has been pretty clear about his guidance, and pretty clear about why it’s important to do what he’s asking them to do, and these actions seem to be making a difference,” Merkel said. “But now is not the time to take your foot off the accelerator.”
Donovan said he was grateful for the efforts of the state’s law enforcement community, and optimistic about compliance with the governor’s order.
“I want to thank law enforcement for the incredible work they are doing to help keep us safe,” he said. “We’ve all got to do our part to protect each other, and I know Vermonters are going to do the right thing.”