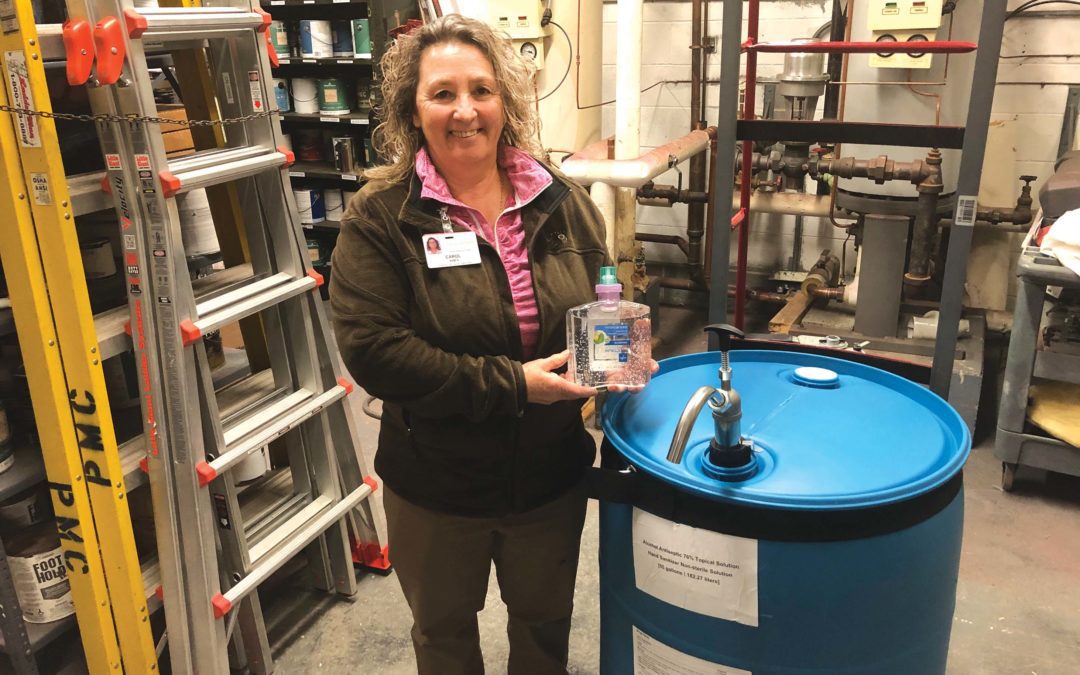 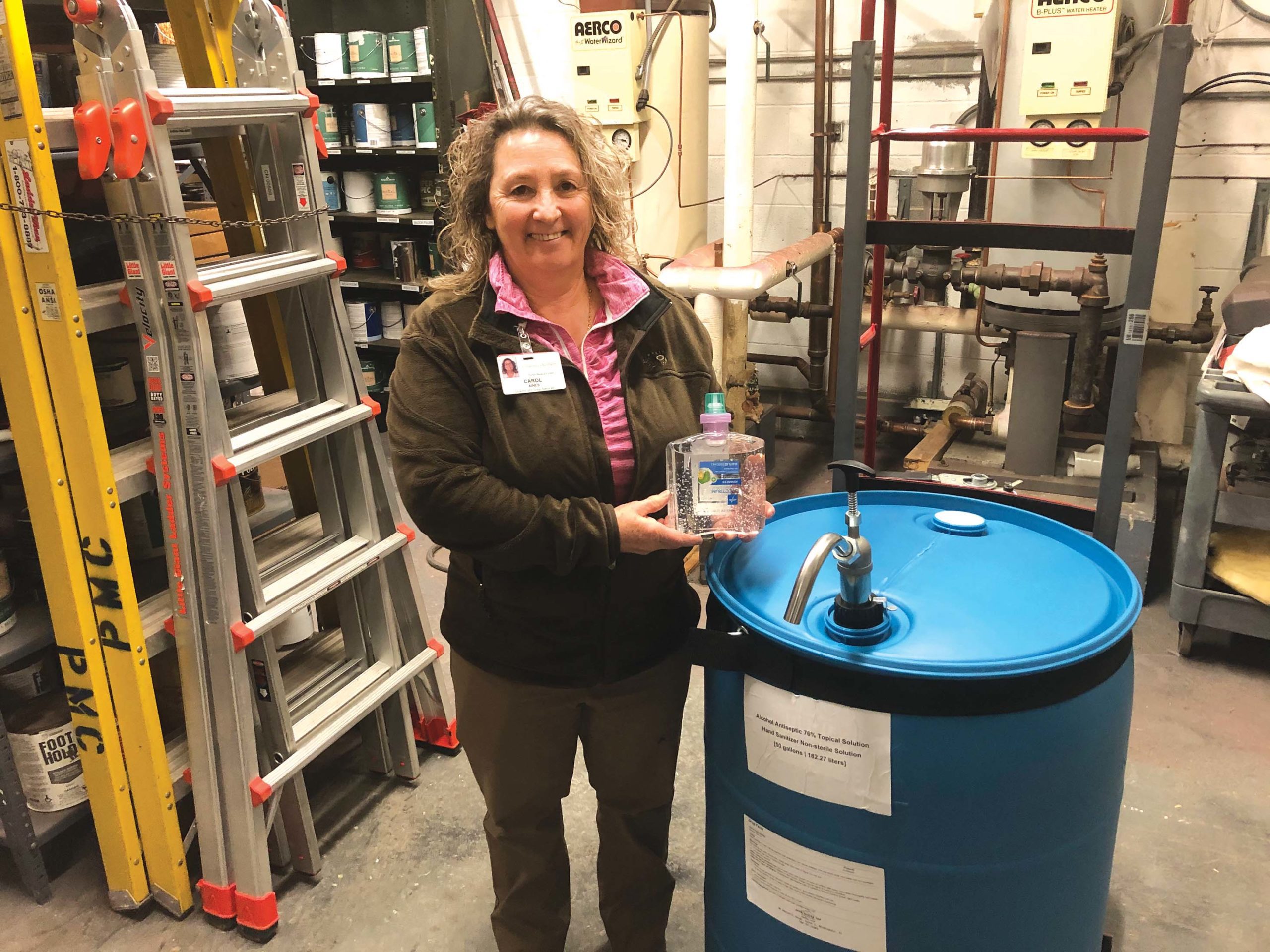 PORTER MEDICAL CENTER Director of Environment Services Carol Aines stands next to the first barrel of locally made hand-sanitizer. Three businesses in Middlebury’s industrial park are providing the resources to make sure the county’s hospital has enough hand sanitizer.
By John Flowers

You have so many people who are saying, ‘I want to help,’ and, ‘How can I help?’ That’s such a wonderful thing to see in scary times like these.
— Sivan Cotel, Porter Medical Center board chairman

MIDDLEBURY — What do you do when a global pandemic tightens the market for your product so much that it forces you to pare back on manufacturing?
If you’re the leaders of three Middlebury businesses, you plow your resources into making a hand sanitizer, a critical tool for area hospitals to prevent the potential spread of said pandemic, COVID-19.
Appalachian Gap Distillery, Aqua ViTea and Vermont Soap have pooled their equipment, raw materials and manpower to make a hand sanitizer that will be distributed, initially in 55-gallon drums, to all hospital affiliates within the University of Vermont Health Network (UVMHN). One of those affiliates, Middlebury’s Porter Hospital, received its first drum of sanitizer last Friday.
“It’s so cool that we can do this in our community,” said Porter Medical Center board President Sivan Cotel, who coordinated the effort. “You have so many people who are saying, ‘I want to help,’ and, ‘How can I help?’ That’s such a wonderful thing to see in scary times like these.”
The three businesses, all located in Middlebury’s industrial park off Exchange Street, got word that Porter Hospital was running low on hand sanitizer. Conventional manufacturers haven’t been able to keep pace with demand amid the coronavirus pandemic, as people are being urged to keep their hands clean in order to reduce chances for spreading the disease.
Each player is bringing something to the table.
Aqua ViTea has nice reserves of alcohol distilled from its popular kombucha, a fermented tea drink with healthful properties.
Vermont Soap also occasionally has alcohol to spare; the alcohol is used in the manufacture of some soaps.
And App Gap Distillery has a still in which to heat the ingredients to make hand sanitizer.
Their efforts will pay dividends not only for Porter Hospital.
Indeed, the collaboration has become so successful the group will in the coming weeks be delivering barrels to all six hospitals within the UVMHN. The network will work in concert with the administration of Gov. Phil Scott to determine where the new sanitizer is needed the most, according to Cotel.
And Montpelier’s Barr Hill is offerings its considerable still capacity to advance the effort.
“We’re trying by the end of this week to produce 30 or more 55-gallon drums (of sanitizer),” Cotel said. “So we’re talking about 1,600 gallons or more.”
Participants in “operation hand sanitizer” were motivated by a sense of duty to help health care workers wage war against the coronavirus. While they hope to eventually recoup their costs, that’s not foremost in their minds right now.
“I’m sort of taking this as a kind of a social responsibility, as opposed to a chance to make money,” App Gap Distillery Co-founder Lars Hubbard said. “When the need is there, you just do it and let the dust settle where it may and figure it out later.”
Hubbard said he has enough ingredients right now to make around 8,000 gallons of sanitizer. Indeed, the manufacture of hand sanitizer has been App Gap’s main focus since COVID-19 began making inroads into the Green Mountain State. Distillery tasting rooms and bars have shut down, per order of Gov. Scott. Some liquor stores are paring back hours.
“The entire country is sort of hiding under a rock for a while,” Hubbard said. “That’s going to have an impact on our business. When we saw coronavirus coming, we packaged up as much (of our spirits) as we could, thinking we’d have to jump into the fray, and that’s what happened.”
Aqua ViTea founder and CEO Jeff Weaber is providing 2,000 gallons of alcohol to “operation hand sanitizer.” Aqua ViTea has a vacuum still that extracts alcohol from the kombucha without using heat.
“We’re one of the only kombucha brands that can claim to be authentic and alcohol-compliant,” he said.
The captured alcohol is a nice, value-added product. The company was already selling some of it to App Gap as a vodka ingredient.
The alcohol must be further distilled once it gets to App Gap in order to meet World Health Organization standards for hand sanitizer, officials said.
Once the hospitals’ emergency needs are met, the three businesses hope to turn their attention to more convenient hand sanitizer packaging for smaller-scale users — such as rescue squads and fire departments — that need to beef up their stock during the pandemic.
“We realized it was important to get a bulk format for Porter to get them something quickly, rather than try to figure out packaging through the production line at Vermont Soap,” Weaber said.
Aqua ViTea is diverting the alcohol from other, more lucrative uses. But Weaber and his colleagues know the health of the community is at stake.
“We definitely see the need for (hand sanitizer) right now, and it’s hard to foresee how long that’s going to be,” Weaber said. “We’re going to try to stay with it.”

KEEPING PEOPLE SAFE
At the same time, the crew is trying to recruit other businesses to pitch in with supplies.
“We’re working with some other companies throughout Vermont to try to create a sustainable supply of this and get it out and available to as many people in the community who need it,” Weaber said.
“It’s kind of a no-brainer for me,” Hubbard said of the project. “The key to this, for me, is that you sort of meet the need rather than worrying about getting paid for it. No one should have to give away their labor and materials, but everyone should be responsible and cognizant of how much pain people are in out there.”
While he’s hoping to eventually be reimbursed for materials and utilities, Hubbard isn’t worried about being rewarded for his time spent on the sanitizer project.
“Ultimately, it’s more important to me that people are safe,” he said.
Vermont Soap CEO Larry Plesent agreed.
“When your community needs help, it’s what you do,” he said.
It should be noted that Vermont Soap is collaborating with Shoreham-based WhistlePig on a separate hand sanitizer effort. WhistlePig is providing the alcohol for a sanitizer that will be bottled at Vermont Soap. The joint effort is expected to yield 20,000 bottles to be given away, according to Plesent.
“We’re trying to make room on our production line right now,” Plesent said.
In addition to being an entrepreneur and civic volunteer, Cotel is vice president of the Vermont Distilled Spirits Council. This made him a great person to rally distillers behind the idea. He recently moderated a conference call with member distillers to talk about the hand sanitizer project, and recruit more players. He learned during the call that several other distillers were venturing into sanitizer production to help their respective communities.

STATE PERMITS
Cotel said state and federal authorities should be credited for green lighting the project so quickly and agreeing to an expedited permitting process.
“We worked really hard with regulators to get it to be legal,” Cotel said. “I spent time with the chief of enforcement for Vermont Department of Liquor and Lottery, who worked with us to create a quick and easy process for anyone who’s going to be doing this. We were able to get that (permitting) guidance out to everyone… so they are on the same page about how to do this, and how to do it quickly. The real challenge that people have seen is that a lot of the raw ingredients required for this are in short supply nationally.”
Were it not for the streamlined permitting process, it would be hard to imagine a freelance hand-sanitizer movement generating enough volume to satisfy hospitals’ needs, Cotel said.
“If you look at what we’re doing right now, my guess is that we are about to be one of the largest providers for the whole state,” Cotel said. “And to do an operation at that scale would be much harder without proper blessings from the state.”
Of course the best scenario, according to Cotel, is if the conventional hand sanitizer industry catches up with demand within the next two or three weeks, thus allowing distillers to return to what they do best — making spirits.
“I’ve always been big on collaborations,” Weaber said. “To see this pull together so quickly is heartwarming. People are definitely making sacrifices to make this happen, and that’s fantastic. There’s definitely a balance that needs to be met between the needs of the small businesses that need to be kept operational, and the needs of the community.”
Porter spokesman Ron Hallman praised the three participating local businesses and Cotel.
“This collaboration by local businesses to support the COVID-19 response by Porter Medical Center is deeply appreciated and demonstrates the deep level of commitment our community feels about our organization and our mission — we are so grateful.”
Reporter John Flowers is at johnf@addisonindependent.com.