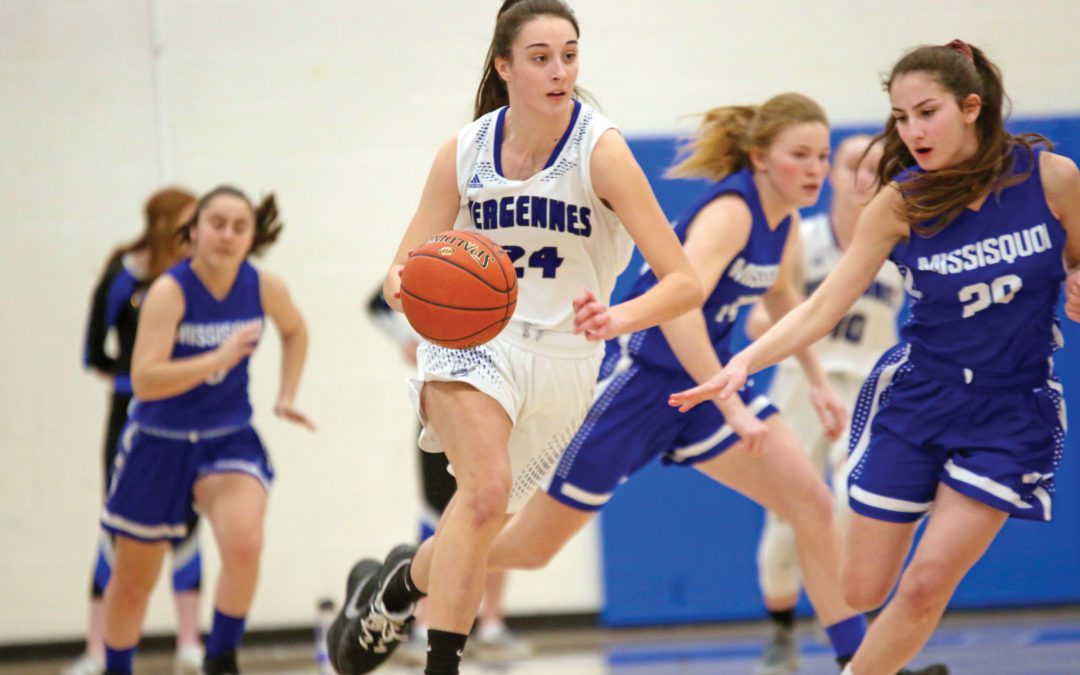 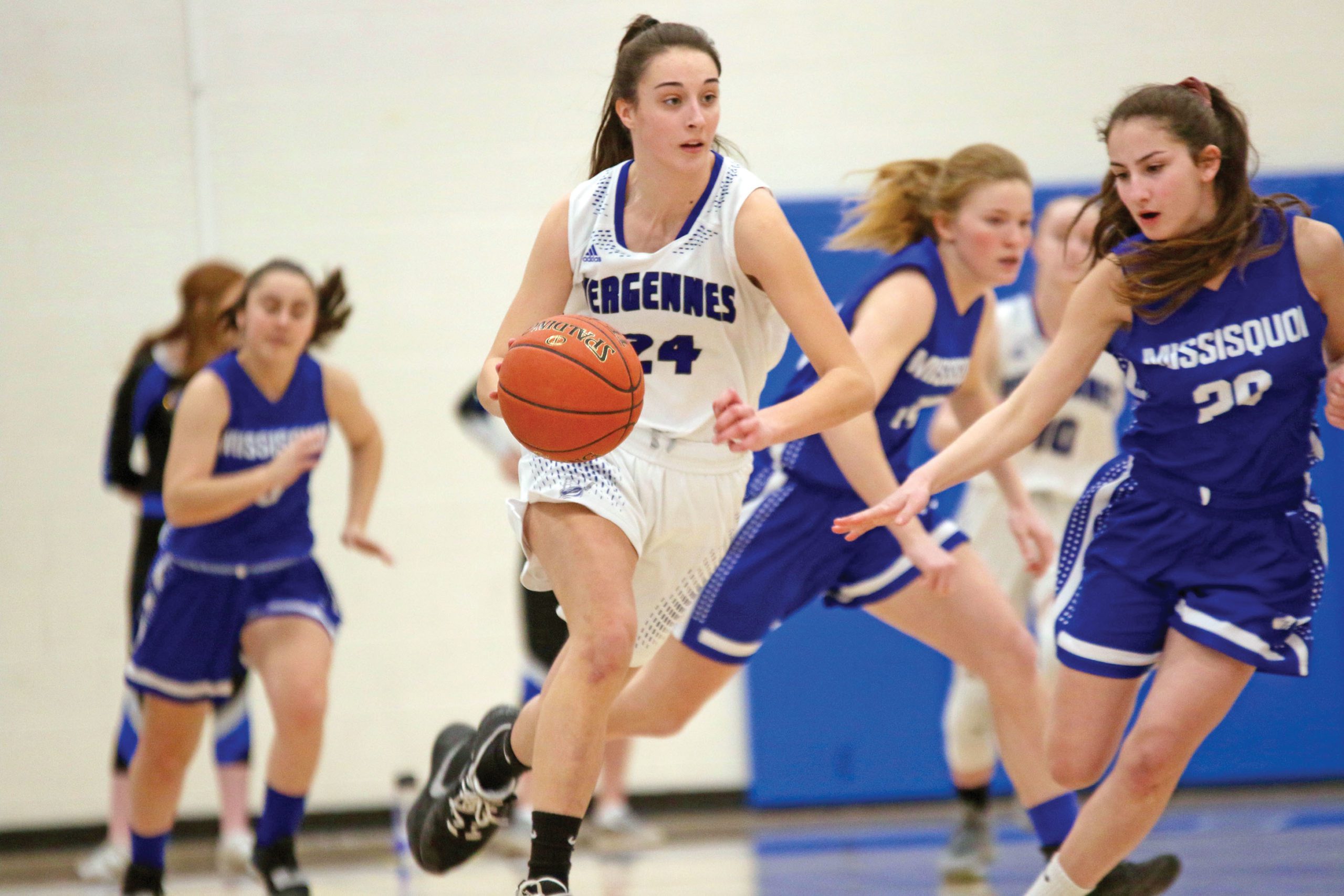 VUHS SOPHOMORE FELICIA Poirier heads up the court while guarded by Missisquoi’s Serena Power in the Commodores’ Thursday home win. Poirier scored nine points vs. MVU and led VUHS in scoring in a Saturday road victory.
By Andy Kirkaldy

VERGENNES — Vergennes Union High School junior forward Kate Gosliga was most excited to talk about one thing after the Commodore girls’ basketball team defeated visiting Missisquoi on Thursday, 56-37.
“We really want a home playoff game,” Gosliga said. “It would be so awesome. We’re so excited. Oh, my goodness.”
On Saturday the Commodores took a step closer to that goal by defeating host Richford, 43-38.
That leaves the Commodores with a 10-8 record, good for seventh place in Division III with two games to go. Barring shockers, they will finish seventh and host the No. 10 seed — probably Otter Valley.
VUHS will host Winooski on Monday and visit Colchester on Thursday. A win in either game will clinch the No. 7 seed, and VUHS won at Winooski by 37 points on Jan. 14. VUHS also defeated Colchester by nine at home. But it will be equally hard to move up: A 13-5 team would have to lose twice while VUHS won twice.
But just hosting a playoff game for the first time in roughly a decade would be an accomplishment, and Coach Billy Waller said it could help the Commodores in the next round against top seed.
“No matter who you get in the second round it’s going to be a tough game. So you want to get a home playoff game and get yourself in a little rhythm,” Waller said.
On Saturday D-IV Richford (8-9) was stubborn, but as was the case on Thursday the Commodores’ willingness to attack the basket earned them many trips to the foul line, and they took advantage of them, sinking 15 of 20 free throws.
Felicia Poirier led the offense with 14 points, adding seven rebounds and three steals; Gosliga, who on Thursday poured in 24 points, chipped in 12 points and eight rebounds; Emily Rooney contributed seven points, six rebounds, five steals and three assists; and Amber Krumrie added three each of rebounds, assists and steals.
Early on in Thursday’s game at VUHS the D-II T-Birds (4-14) looked like they might upset the Commodores for the second time this winter.
Five T-Birds scored a basket apiece in the first period, including Alexandra Brouillette’s three that made it 11-8, MVU, after eight minutes. The T-Birds added the first five points of the second period to make it 16-8 before the momentum changed.
First, just as Gosliga was ready to shoot free throws, the MVU coach received a technical for an accidental illegal substitution. At 5:15, Gosliga hit three of four three throws.
And while officials were consulting about the miscue, Waller told the Commodores to apply full-court pressure. The Commodores then forced 10 T-Bird turnovers in the quarter, which they closed with a 14-4 run to take a 22-20 lead.
Gosliga did most of the damage. She hit two more free throws and a move inside after a Poirier steal, and also stole the ball and fed Poirier for a hoop. Poirier also set up an Ema Gernander jumper (the first outside shot VUHS hit), and Sydney Jewell sank a free throw to cap the quarter. Rooney, one of two seniors on the team, forced many of the turnovers.
Gosliga said the press sparked the Commodores on offense as well as shut down MVU.
“It definitely put them on their heels,” she said. “And it really helped us gain confidence in ourselves.”
Krumrie, the other senior, opened the second half by hitting a three. A bucket by MVU’s Riley Noel and a Brouillette free throw cut the VUHS lead to two, but the T-Birds wilted under the press and turned the ball over another 10 times in the period.
And the Commodores went on a 10-0 run. Lauren Curtis hit a jumper and a three, Poirier sank a free throw and assisted a Rooney hoop, and Hannah Kelly capped the surge with a bucket in the paint. By the end of three, VUHS led by 10, 37-27.
VUHS pulled away in the fourth, and by the time Sophie Hatch made two strong mid-period moves inside and Jordan Jewell hit two free throws every Commodore was in the scorebook.
Waller said all 10 of his players have contributed both ways.
“We have 10 girls, and we play them,” Waller said. “Everybody knows you could go in at any point, and you’re expected to do the same job as the person you went in for. I think because of that, they know they’re going to have their moments.”
Brouillette led MVU with nine, and Macayla Langlois scored eight.
Behind Gosliga, Poirier scored nine, Hatch had six, and Curtis added five.
Waller and Gosliga agreed that defense will be the key ingredient moving forward.
“If we have good defense, that’s what matters,” Gosliga said. “Offense comes and goes, but you can always have a solid defense.”
And about that home playoff game?
“If we don’t get it we’re still going to play as hard as if we did,” Gosliga said. “But it would be so awesome if we did get it.”
Andy Kirkaldy may be reached at andyk@addisonindependent.com.