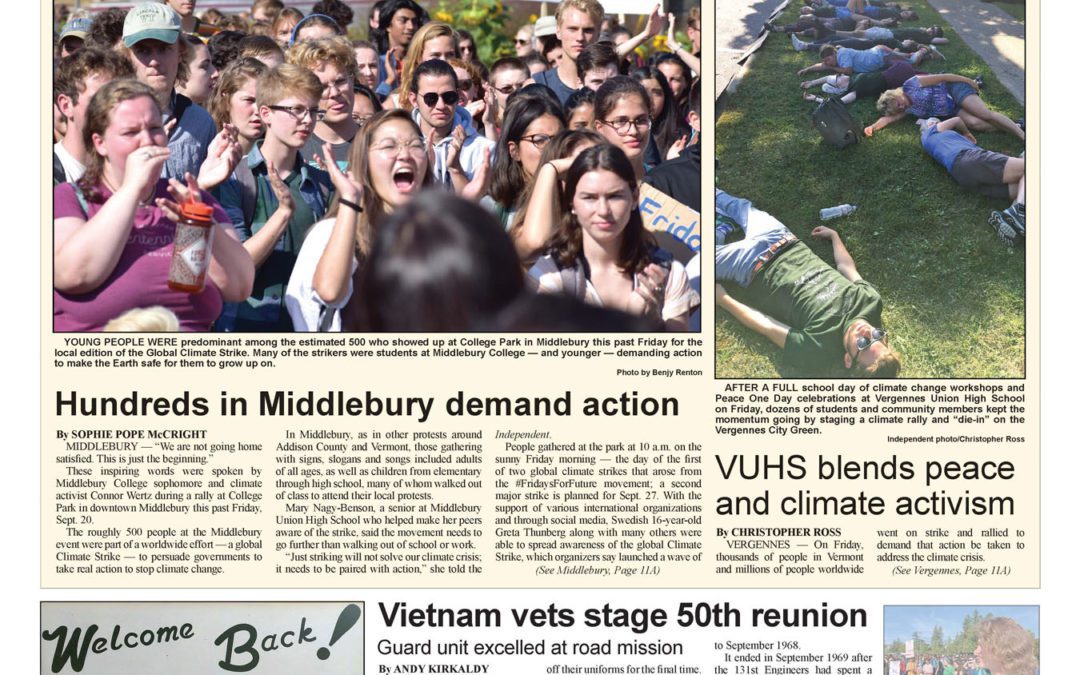 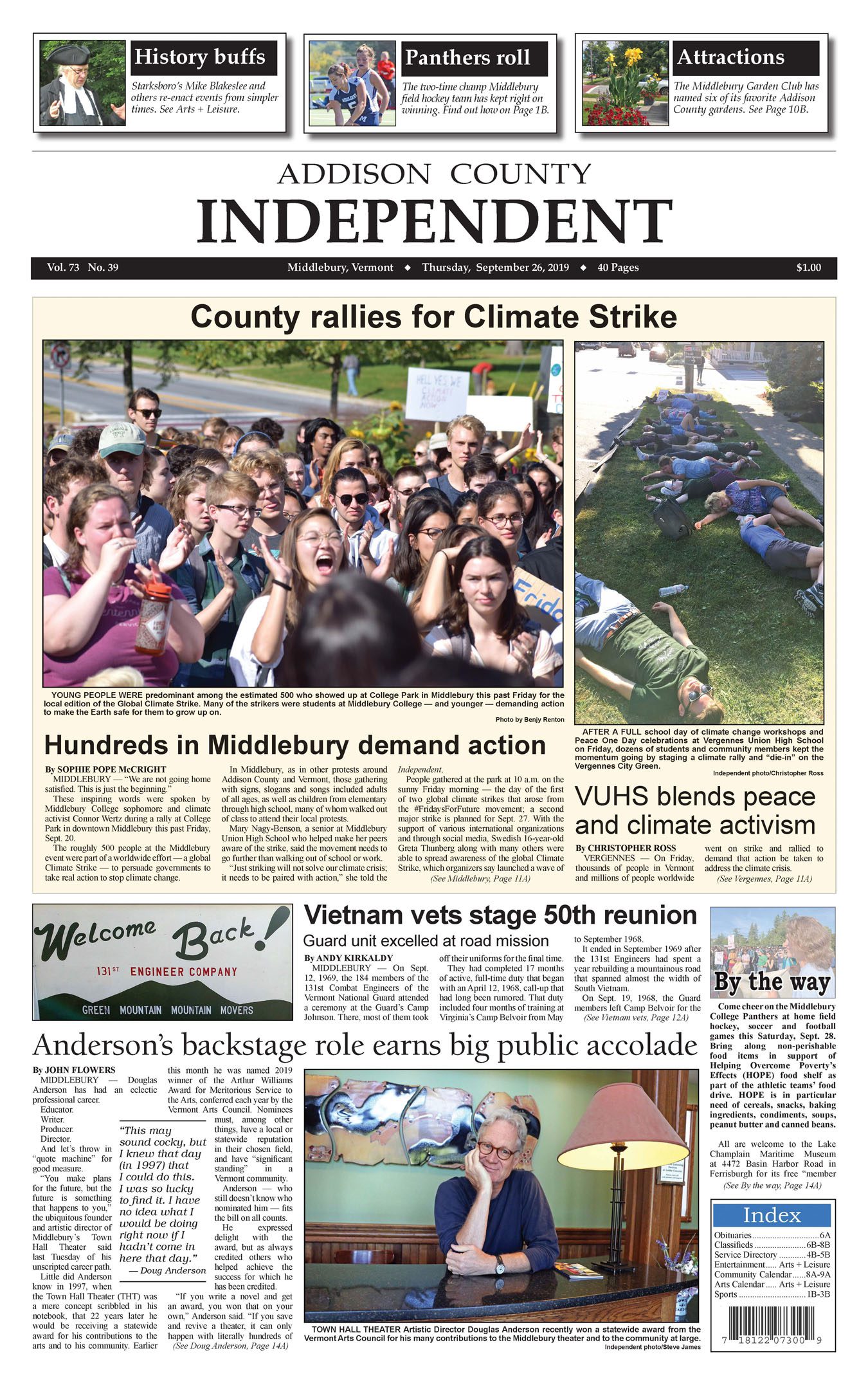 Climate justice activism may have reached a critical turning point in 2019. The largest climate protest in history was held in September and Greta Thunberg, a 17-year-old Swedish climate activist, was nominated for a Nobel Peace Prize and named Time magazine’s person of the year.
In Vermont, climate activists raised their voices again and again in 2019, from the first day of the legislative session to the last public policy forum convened by the Vermont Climate Solutions Caucus. In between, the protests grew louder, became more frequent and attracted larger crowds, inspired in large part by the efforts of Vermont’s youth climate movement, which came into its own in 2019.
Highlights from the year in climate activism include:
• Jan. 9, the Vermont Youth Lobby and 350 Vermont at the Statehouse calling on lawmakers to ban fossil fuels and institute a carbon tax.
• Feb. 14, members of Mother Up! deliver valentines to legislators encouraging them to “love the planet.”
• Town Meeting Day, Middlebury joins 15 other Vermont Towns (statewide total is 55) in passing non-binding resolutions calling for an end to construction of fossil fuel infrastructure, a commitment to 100 percent renewable energy by 2030 and a fair and equitable transition to those standards.
• March 15, Addison County students rally at College Park in Middlebury, while hundreds of students descend on the Statehouse as part of a worldwide climate strike.
• April 5–9, county residents take part in the five-day, 65-mile Next Steps Climate Solutions walk from Middlebury to Montpelier; more than 300 people at the Statehouse encourage lawmakers to work with more urgency toward such bills as H.51 (banning further fossil fuel infrastructure in Vermont), H.176 (prohibiting the use of eminent domain for fossil-fuel projects) and H.214, which would in part require the Public Utilities Commission to expand its assessments of greenhouse gas impacts to include the leakage of methane.
• April 19, Middlebury College students and other youth climate lobbies hold a Green New Deal town hall to present and receive input on a proposed resolution supporting a State Green New Deal and policy proposals related to climate change and social justice.
• April 23, county climate activists testify in a Montpelier hearing on various climate-related bills.
• May 1, Vermont Youth Lobby and others stage a Rally for the Planet at the Statehouse.
• May 16, Members of Extinction Rebellion — a global environmental movement using nonviolent civil disobedience to compel government action on climate change — interrupt the proceedings of the Vermont House of Representatives. Two Middlebury College students are arrested.
• In June the Climate Economy Action Center of Addison County incorporates as a nonprofit; it aims to stimulate the local economy while responding to climate change.
• Sept. 20, as part of the largest climate protest in history, hundreds of Addison County residents — the majority of them students — rally in Middlebury, Vergennes and elsewhere in the state. The Global Climate Strike, which included a week’s worth of events and actions, drew between 6 million and 8 million people worldwide.
• Sept. 20–27, Addison County climate justice advocates stage actions, including banner drops on Route 89 and a nonviolent direct action in New Hampshire at the last coal plant in the region.
• Oct. 2–Dec. 16, Vermont Climate Solutions Caucus (including 80-plus legislators) holds 19 climate policy forums — including in Bristol, Middlebury and Vergennes.
• Nov. 17, nearly 200 Vermont youth —organized and led by students (some from Addison County) — gather in the Statehouse for the Vermont Youth Climate Congress, which pushes Vermont’s elected leaders to take urgent action on the climate crisis.