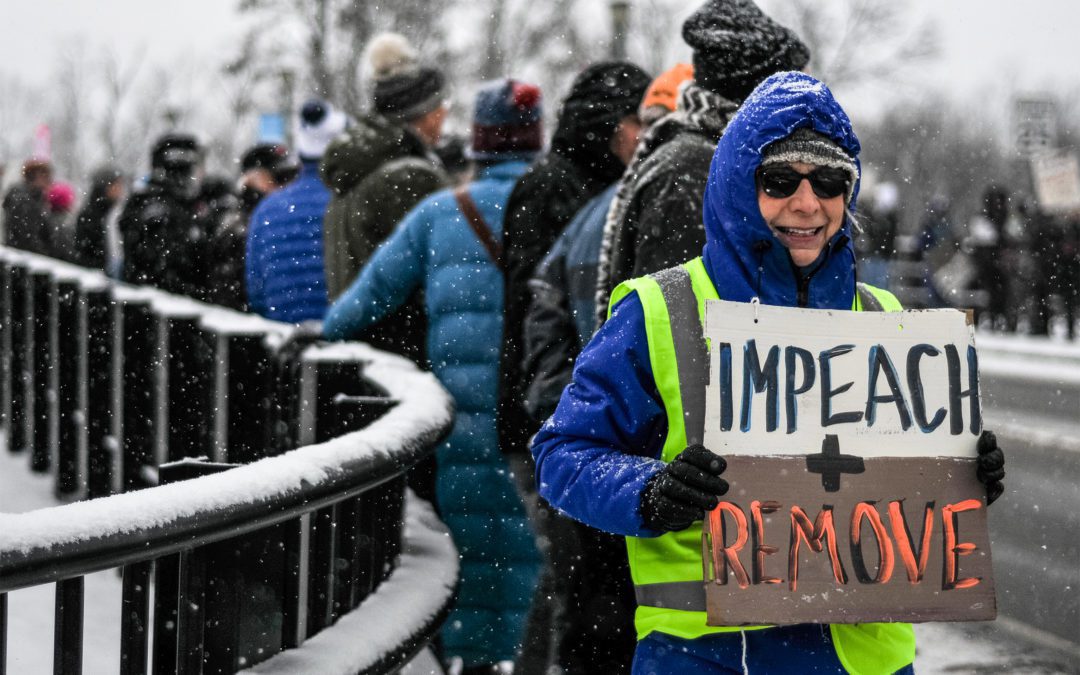 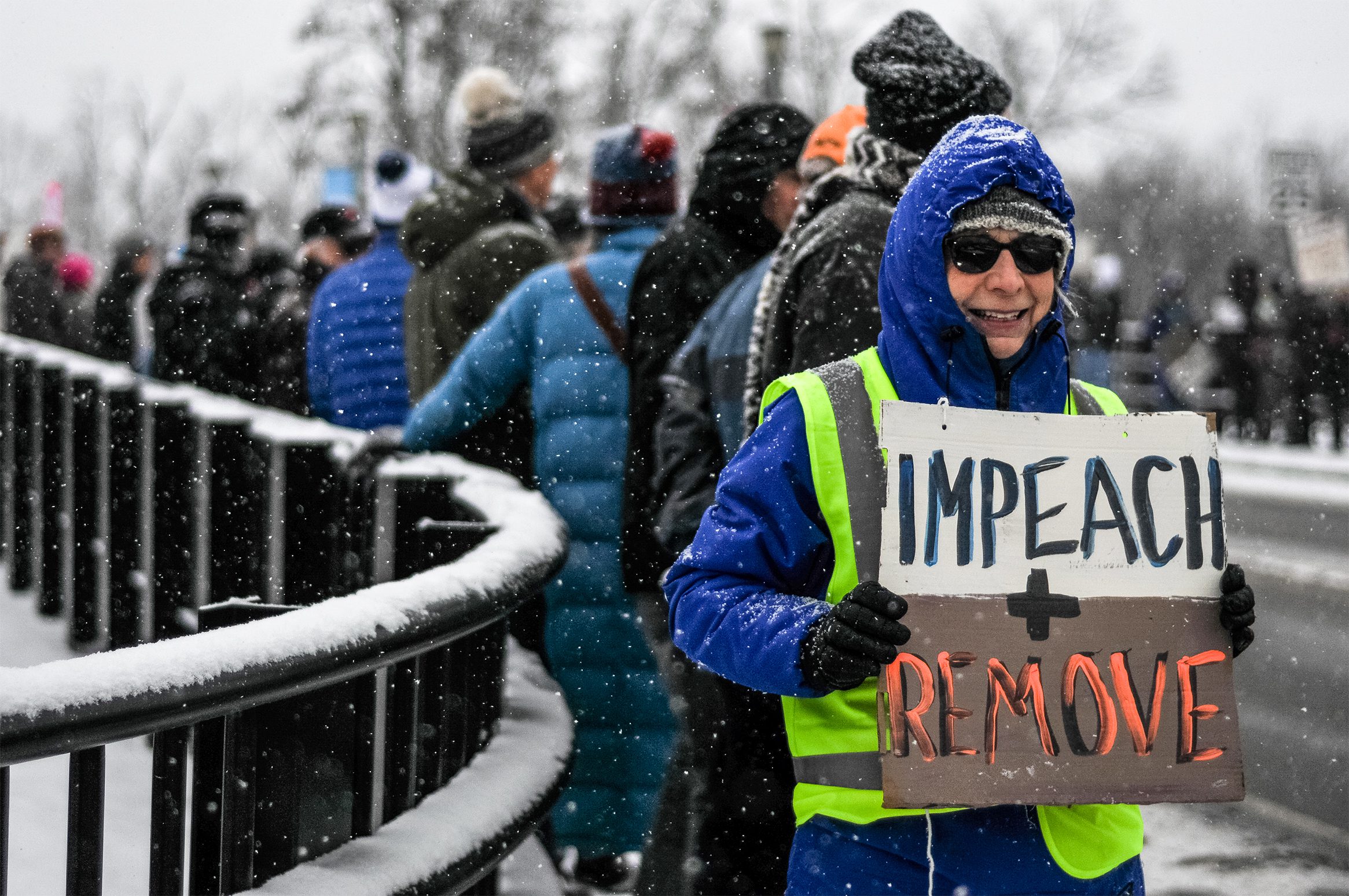 A CROWD OF about 150 gathered on Middlebury's Cross Street Bridge on Tuesday afternoon calling for the impeachment and removal of President Donald Trump. Photo by Jason Duquette-Hoffman
By Angelo Lynn

In more than 600 protests across the country earlier this week, Americans gathered to express their disapproval of a president who has betrayed the country for his personal benefit, and obstructed justice to prevent a full accounting of his suspected misdeeds.
Protests signs led crowds in chants to “Dump Trump” and “Impeach Putin’s Puppet,” while others in red states like Kansas repeated the mantra “Country Over Party,” in a vain hope that some Republican legislators might put the country’s future over the Republican Party’s gambit to retain power by condoning unlawful acts of the president. If only it were so, but polls show a country split almost evenly on the question of whether to impeach Trump and remove him from office, versus those who oppose impeachment and his removal.
In Middlebury, about 150 protesters gathered Tuesday on a snowy afternoon on the Cross Street Bridge chanting slogans to impeach the president and calling for Americans to stand by the nation’s principles as a nation ruled by law, not by an authoritarian leader who maintains he is above the law. (Click here to read our story and see more photos from that rally.)
That message fit the theme of national organizers, who dubbed the impeachment rallies as “Nobody is above the law” protests, putting the focus on Trump’s lack of respect for the Constitution and his flouting of Constitutional limits of presidential powers. Trump is fond of boasting that he could shoot someone on New York City’s Fifth Avenue in cold blood and his supporters would still vote for him.
These protests are the public’s response to that unthinkable prospect, and to holding the president responsible for his treasonous behavior.
But with a Republican-controlled Senate unwilling to exercise its role in reigning in the Executive branch and instead be a lackey of this president, it’s clear that the legislative branch will not be an effective balance of power to counter an out-of-control presidency.
To that point, however, it’s important that the House follow through on its Constitutional duty in the impeachment process as a check on the president’s power. The Senate, and Senate Majority Leader Mitch McConnell, will be indicted by history for conducting a sham trial if they fail to bring key witnesses to testify (including former and current heads of state like John Bolton who know the details of the Ukrainian deal Trump tried to broker and whom Trump had forbidden to testify in the House impeachment hearings), but only if Trump is defeated next November. That’s because most Americans, over 70 percent in recent polls, expect the Senate to conduct a fair trial.
If the Senate fails to exonerate the president and the Senate hearing is seen as a cover-up for him, it’s then left up to the citizens to vote him out of office next November.
That scenario is what makes it important that the House fulfill its Constitutional role to challenge the executive’s right to govern by lies and deceit, to further the president’s personal gain over the good of the country, to place the nation’s security in jeopardy, and to obstruct the legitimate right of Congress to discover alleged crimes by the executive branch.
To all those true conservatives, who have long been afraid of an executive branch exercising too much power, this should be a moment they championed — when Congress, the one branch of government closest to the people, called the executive to task for over-extending that office’s constitutional powers and blatantly violating laws of the state.
Ironically, those very conservatives are the ones supporting Trump’s unchecked powers. They are, in turn, embracing the erosion of democracy and the rise of autocracy fueled by a tribe mentality and a cultivated hatred of those on the “other side.”
**********
That Trump is guilty of the alleged offenses is beyond doubt. The evidence is ironclad and, to date, no Republican has objected to the facts as presented. Like Trump, they have argued it’s “a sham,” it’s “unfair,” but none have denied the evidence on which Trump is charged. And it’s why McConnell has said he will not allow Trump’s cabinet members and people knowledgeable of the Ukraine affair to testify. He knows that under oath, they might feel obligated to tell the truth.
For those who are not convinced of Trump’s guilt, who think the Democrats have rushed the impeachment process and not uncovered enough evidence to prove their case, we urge them to simply read all, or parts, of the House’s report of their findings. This is a 290-page report detailing what the House committees discovered through weeks of exhaustive research and interviews with the nation’s intelligence community, those serving in the nation’s foreign affairs offices, and those serving the president who objected to his abuse of powers. See the full report at bit.ly/2M92bA2.
In that report, there’s a 20-page executive summary for those who don’t want to pore over the 290-plus pages. For those pressed for time, get started with a three-pages titled “Key Findings of Fact.” If you don’t think the president illegally froze military assistance to the Ukraine, using that as leverage to get them to allege a previously debunked conspiracy theory against former Vice President Joe Biden, see that section clearly documented on pages 67-82. And if you don’t think he obstructed justice, you haven’t been paying attention but you can catch up by reading six carefully documented sections from pages 202-292.
Whether you choose to read the full report collected by bipartisan committees of House members, or just parts of it, at least read the three pages that reflect the key findings of fact before you repeat falsehoods from Fox News or others. Every American owes it to themselves — and to their friends, family and community — to be informed enough to defend our democracy from those who would tear it down. We are our own worst enemy, if we choose to ignore the facts and fall lock-step into line with those who demand blind loyalty over critical thinking.
Angelo Lynn