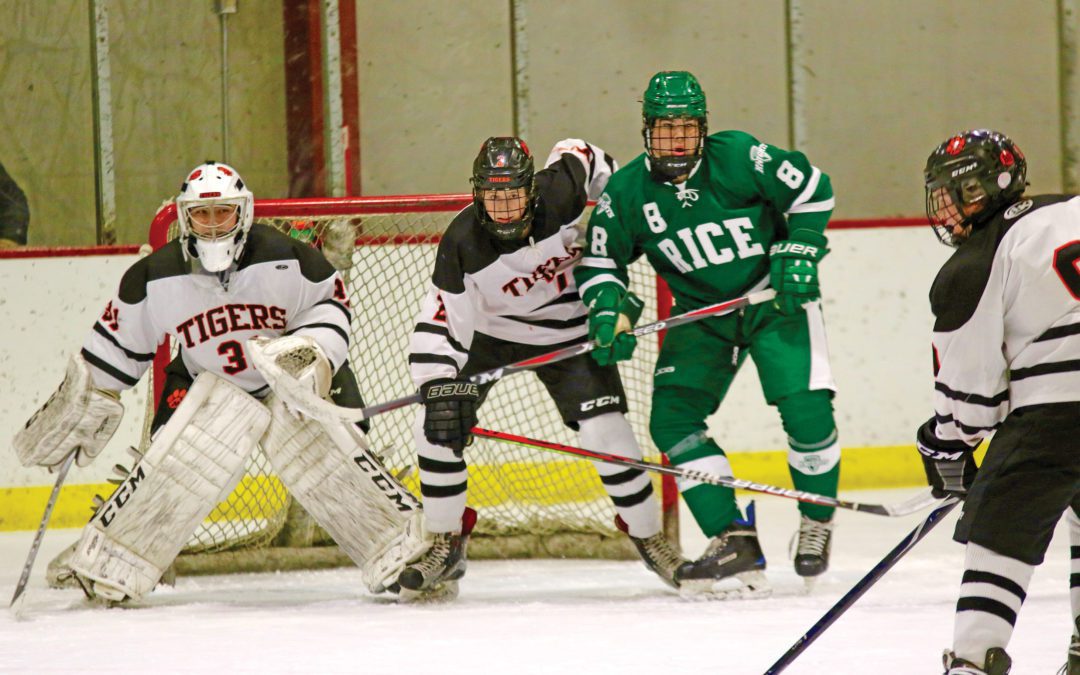 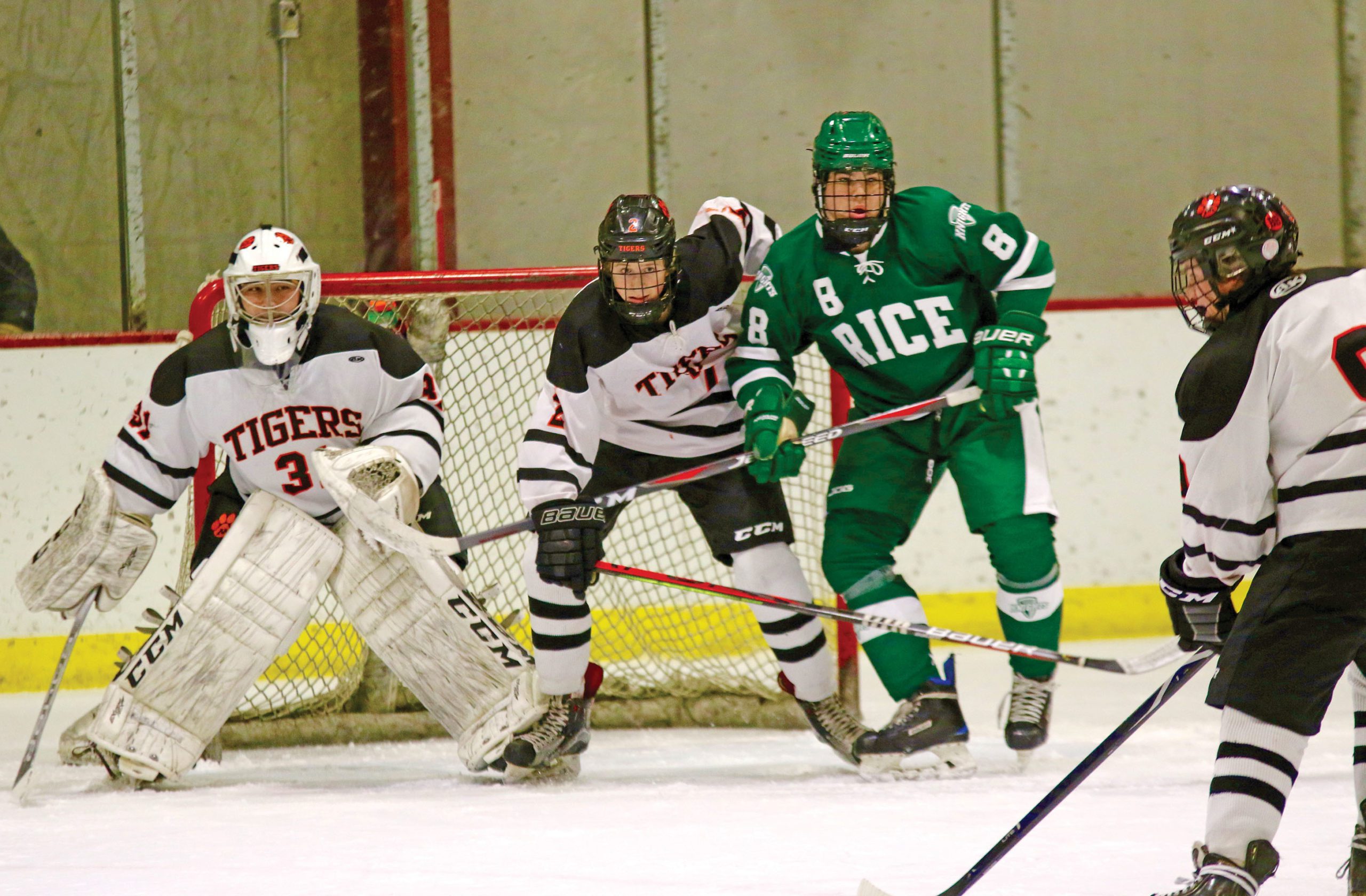 MIDDLEBURY — An opportunistic Rice team with a hot goalie skated out of the Memorial Sports Center Tuesday evening with a 3-0 victory over the Middlebury Union High School boys’ hockey team in the Tigers’ season opener.
Rice goalie Carson Barnes, a sophomore from Ferrisburgh who played youth hockey with a number of the Tigers, stopped 34 shots to frustrate many of his former teammates.
Tiger Coach Derek Bartlett had nothing but praise for Barnes.
“I thought Carson had an outstanding game. He made huge saves when he had to,” Bartlett said. “I felt like we had some great looks, and I felt like the light was going to go on, and then Carson’s making a save there. So kudos to him. He’s a great kid. He’s a great competitor.”
Even with the setback Bartlett was not unhappy with the Tigers’ effort, despite the fact they fell behind, 2-0, after one period. MUHS outshot Rice, 34-20, and controlled much of the action.
“The first two goals were a little unfortunate,” Bartlett said. “We got caught puck-watching, and then we got caught on a breakaway, he split our D. And then they got that third goal, the power-play goal. Other than that I felt we were (skating) up and down. We competed.”
Bartlett would have liked to see the Tigers be more efficient on the power play: Rice was whistled for 10 penalties, twice as many as MUHS. The Tigers had at least brief five-on-three chances three times, and played the game’s final 3:52 with an extra skater after Green Knight Cameron Kinsell was assessed a five-minute major.
He expects improvement in the weeks to come in that area.
“It’s still in the early stages. I was happy with the looks we had and the puck rotation. And it’s just a matter of knowing when to make that next pass or when to put the puck on net. And to be able to shoot the puck vs. throwing the puck on net. We were throwing the puck on net a lot tonight vs. shooting hard, and that will come.”
Rice’s first two goals came in a span of 2:16 late in the first period. Garrett Micicche made it 1-0 at 9:13, with Connor Peet and Jaden Duprey assisting. At 12:29 Sam Rubman converted a breakaway after taking a breakout pass from Kiaran Connolly.
The Tigers came close to making it 2-1 early in the second, but after senior forward Hale Hescock beat the defense into the slot his shot pinged off the right post. Two minutes later it was 3-0, when Connolly ripped a one-timer home from the right circle on the power play on a feed from Jackman Hickey, shortly after Tiger goalie Zeke Hooper had denied Kinsell at the left post.
Then Barnes became the story. In the second period he slid right to stone senior forward Devon Kearns at the left post after a cross-crease pass on a five-on-three power play. And on a late-period power play Barnes stopped junior defender Tucker Stearns’ screened slap shot from the left point and senior forward Kamrin Bartlett’s wrister from between the circles.
In the third, Barnes’ best work came when he stopped both junior defender Abel Anderson and Hescock at the left post, Kearns in the slot on a Hescock feed, and in the late going senior defender Robbie Bicknell from point-blank range.
Coach Bartlett afterward said what he saw was the Tigers playing with the blue-collar identity that he and assistants Jim Derosia, Chase Goodrich and Andy O’Brien all believe will make them successful.
“The nice thing is we know who we are as players and a coaching staff. The effort we gave tonight, with the compete level, we’re going to be OK,” Bartlett said. “We’re going to be in the mix. I thought we were just a little unlucky tonight at times.”