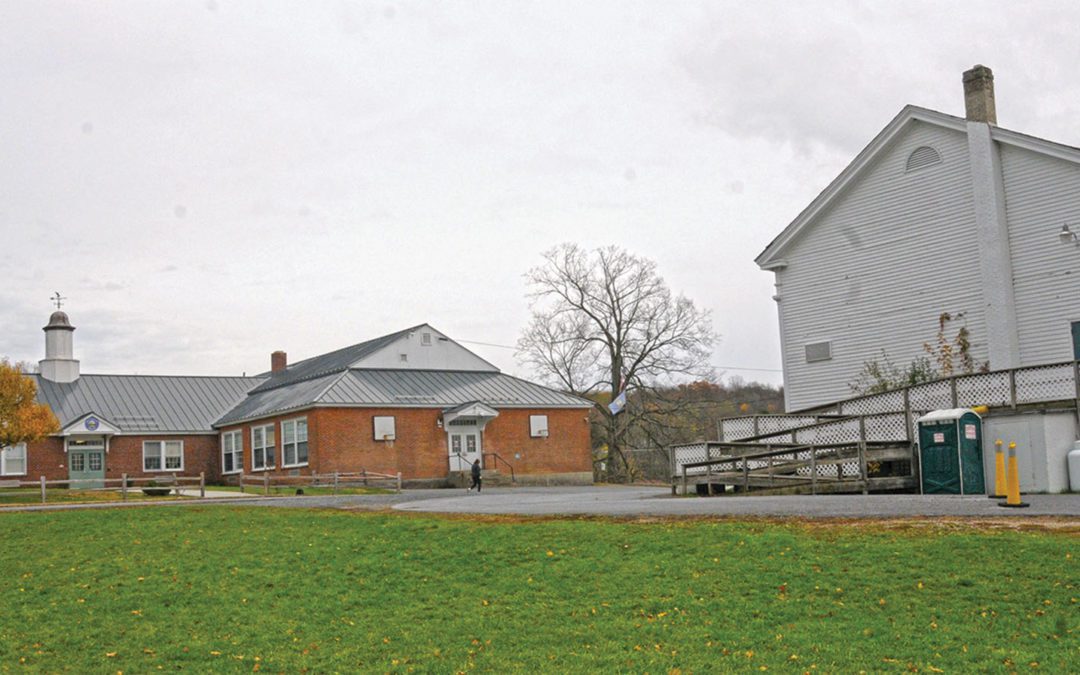 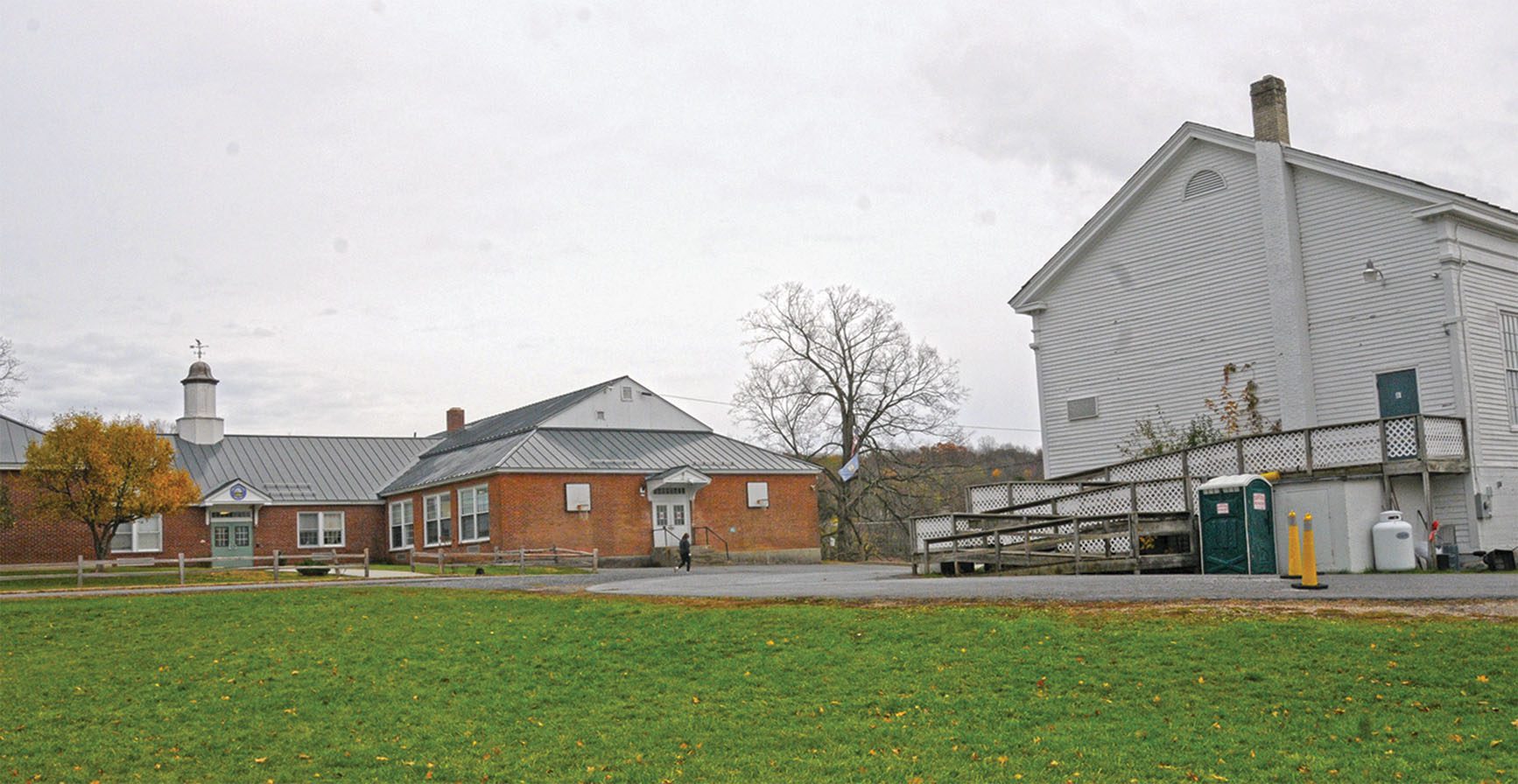 THE ORWELL TOWN Hall, right, could be demolished to make way for a cafeteria/gym addition to the adjacent Orwell Village School. That project is part of a $60 million capital improvement bond for the SVUUSD that includes major upgrades to Fair Haven Union High School and a new middle school in Fair Haven.
By John Flowers

At this point, (the Orwell Town Hall) is an impractical building.
— Peter Stone

ORWELL — Residents of the six towns in the Slate Valley Unified Union School District (SVUUSD) will vote as soon as this coming spring on a massive, $60 million capital improvements bond issue that would, among other things, pay for a new 8,200-square-foot addition for the Orwell Village School.
Recommendations of the SVUUSD Innovation Committee call for construction of a new middle school in Fair Haven and major upgrades to both Orwell Village School and Fair Haven Union High School. The SVUUSD serves children in Orwell, Castleton, Benson, Hubbardton, West Haven and Fair Haven. Orwell merged with the district last year following a district-wide vote. Orwell residents had previously voted multiple times against joining the SVUUSD.
Orwell school directors had been contemplating an elementary school addition months before the town’s entry into the SVUUSD. The addition would accommodate a cafeteria and gym, amenities currently provided at the adjacent, 179-year-old Orwell Town Hall building at 494 Main St., which is in rough shape. The town hall’s shortcomings include a subpar heating system, antiquated electrical wiring, and insufficient access for people with disabilities.
The structure’s primary users are students of the Orwell Village School, who currently walk around 100 feet from their adjacent school — sometimes through rain and snow — to eat and play at the town hall. They have to eat lunch in three separate shifts, as the cafeteria isn’t big enough to accommodate the entire 157 student body.
The town hall gym’s basketball court is far smaller than regulation size. Its kitchen flooring is deteriorating. The building has insufficient insulation and storage space, and its boiler needs to be replaced, according to a review by the Orwell Town Hall Committee.
Brooke Olsen-Farrell, superintendent of SVUUSD, pointed to estimates indicating it would cost around $2 million to repair the town hall.
Committee members recommended that the town hall be razed in favor of a school addition that would accommodate gym and cafeteria services. And the SVUUSD Innovation Committee is now endorsing that plan as part of a broader, $60 million facilities bond intended to address years of deferred maintenance to district buildings and create a new middle school that would be located next to Fair Haven Union High School.
Olsen-Farrell said the Orwell school project — which would include a new heating system for the entire building and other repairs — is currently estimated at $6.5 million. Taxpayers throughout the six-town district would share in the bond debt service if the referendum — which could be fielded as soon as Town Meeting Day this March — is approved. Farrell-Olsen said the $60 million bond estimate could drop lower by the time it is warned.
While most Orwell residents like the idea of an improved and updated school building, some aren’t pleased with the prospect of seeing their town hall demolished. The structure was originally built as a Methodist Church. The Greek Revival-style building sports impressive, Ionic columns that frame its front entrance; it once had a clock tower and steeple, but those were removed around a century ago. It is part of the Orwell Historical District.
The building hosts Orwell’s annual town meeting, an annual turkey dinner put on by the local Congregational Church, and a variety of other, occasional activities sponsored by civic and non-profit groups.
“I think we’re split there,” SVUUSD board member Peter Stone of Orwell said of local residents’ perceptions of their town hall. “There are some who don’t want to take it down, and others are OK with replacing the building with something we can use.
“At this point, it’s an impractical building,” added Stone, who’s also a member of the SVUUSD board’s Buildings & Grounds Committee.
The SVUUSD Innovation Committee spent several months studying school district buildings and education needs before offering its recommendations.
“Our schools no longer fully or equitably support the educational programs that our community desires for its children,” reads a statement in the committee’s final report, issued in September. “Addressing our facility needs is an essential step in realizing our district’s long-term educational vision.”
Olsen-Farrell said some of the proposed SVUUSD school improvements could be made next year if the bond passes in March. Middle school construction would likely commence during the summer of 2021, she added.
If the bond proposal fails, SVUUSD directors will need to regroup and determine whether to re-warn the same proposal or develop a modified one.
“You’re only allowed to put a bond with similar specifications to the voters twice in one year,” Olsen-Farrell said. “I think the majority of the board feels strongly that our students would really benefit from the middle school project, so I’m not sure if they would divorce that.”
The complete SVUUSD Innovation Committee report and recommendations can be found at tinyurl.com/woyh59u.
Reporter John Flowers is at johnf@addisonindependent.com.