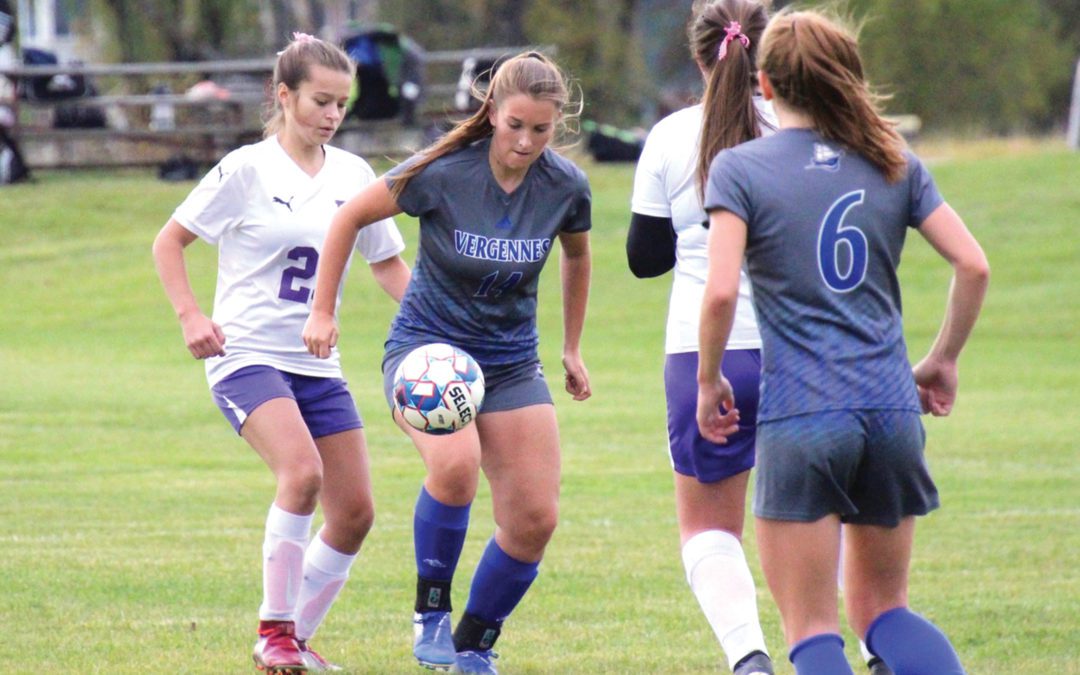 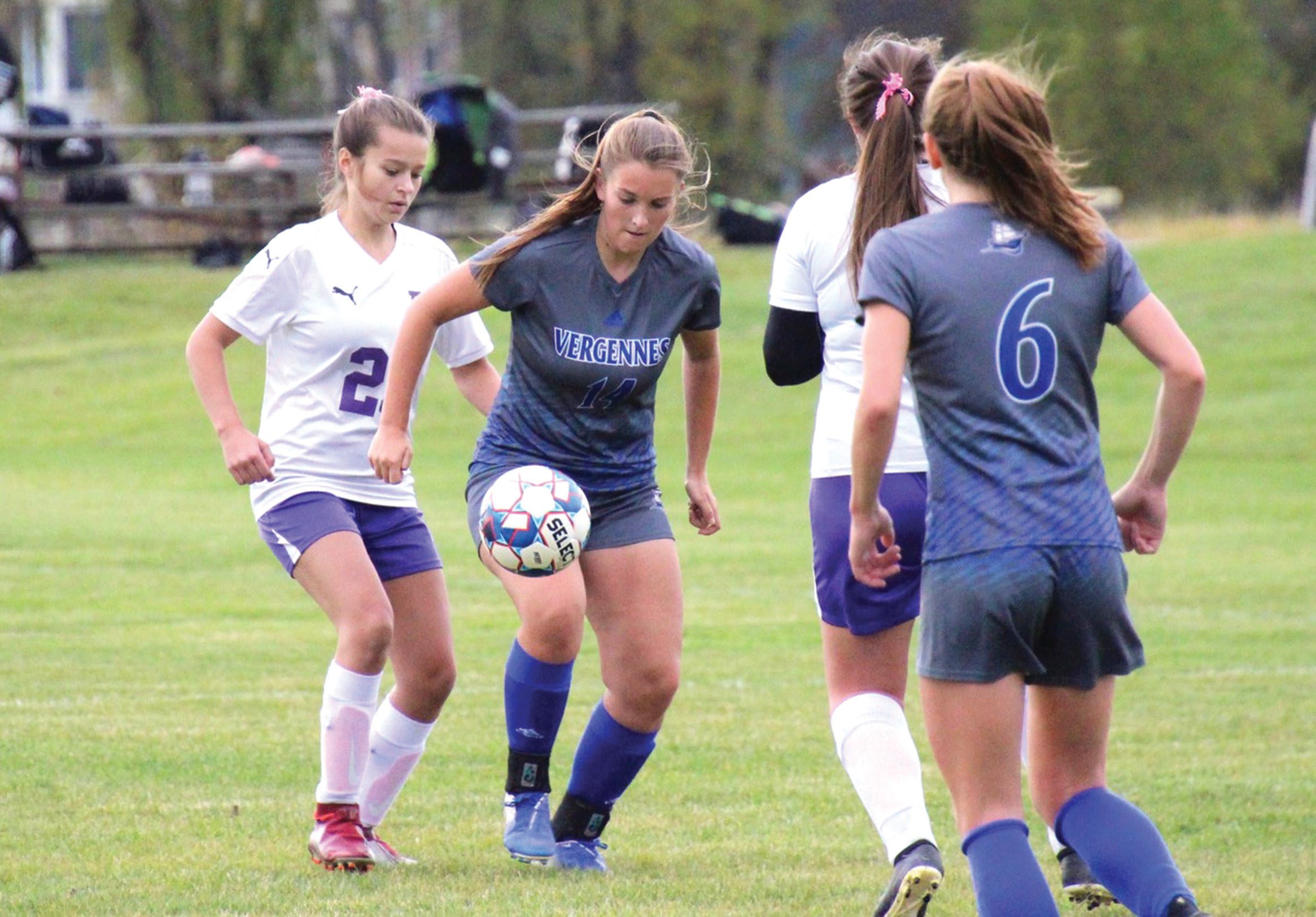 VERGENNES SENIOR CENTRAL defender Sophie Hatch controls the ball under pressure during the Commodores’ first-round home Division III playoff game on Tuesday. No. 2 VUHS defeated No. 15 Bellows Falls, 2-0. Hatch and her fellow defenders did not allow the Terriers to fire a shot at the Commodore goal. Photo by Holly Weber
By Andy Kirkaldy

VERGENNES — The Vergennes Union High School girls’ soccer team, seeded No. 2 in Division II, had a little bit of trouble putting the ball in the net against visiting No. 15 Bellows Falls on Tuesday, but overall had little trouble with the 2-13 Terriers: VUHS outshot them by 39-0 in a 2-0 victory.
The Commodores, seeking a return to the D-III final for the second straight season, improved to 9-4-1 and will host a quarterfinal on Saturday at 1 p.m. Their opponent will be No. 10 Windsor (8-6-1) an upset winner over defending champion and No. 7 seed Oxbow (9-5-1).
EAGLES OVER OTTERS
Two of the other three area girls’ soccer teams met on Wednesday: Host Mount Abraham (12-3) the No. 2 seed in D-II, defeated visiting No. 15 Otter Valley, 6-0.
The Eagles will host a quarterfinal at 11 a.m. on Saturday against No. 7 Harwood (8-5).
That game will mark the seventh straight season Mount Abe and Harwood have met in the D-II postseason; the Eagles defeated the Highlanders in each of the past two quarterfinal rounds.
Vs. OV (4-10-1) on Wednesday Chloe Johnston, from Addy Harris, gave the Eagles the lead in the second minute. Harris made it 2-0 in the 14th minute. Mae Peterson added two goals and an assist for Mount Abe, and Lucy Guy and Becca Laurent also scored.
OV Coach John White said his team’s best chance early on came on a combination play from Olivia White and Julia Eastman, but Eagle defenders blocked Eastman’s bid and then a Mia Politano effort on the rebound.
OV goalie Sophia Walker made 13 saves, while Justice Green and Sophia Venman were untested in the Eagle net.
Middlebury (2-12) would have been D-II’s No. 16 seed, but elected not to participate.
COMMODORES ROLL
In Vergennes VUHS dominated the Terriers from the start, earning two of their 16 corner kicks in the first two-and-a-half minutes and taking a 1-0 lead in the sixth minute courtesy of senior center midfielder Emily Rooney.
Rooney pounced on a loose ball about 25 yards in from the right sideline and 30 yards out from goal and unleashed a bomb high into the center of the BF net. Terrier goalie Corina Mitchell had no chance to retreat and deflect it over.
But despite the ball rarely rolling into the VUHS end and launching 20 first-half attempts at goal, the Commodores couldn’t add to the lead.
There was one anxious moment in the back when the Commodore defense miscommunicated on a pass, but goalie Kate Gosliga pounced on the ball in the box in the 30th minute before a charging Terrier could take advantage of the miscue.
Other than that Gosliga might have touched the ball three or four times on routine plays, and she finished without a save as central defenders Sophie Hatch and Elsa Makelainen and Lauren Curtis and Ema Gernander on the flanks defused the occasional BF foray. Makelainen in particular defended and moved the ball well.
At the other end, co-Coaches Peter Maneen and Dwight Irish said the Commodores were rushing when they had time, or taking too much time when they had open shots.
“We were talking about trying to calm down and being more composed and just taking the space. We were playing too fast at times when they were giving us space,” Irish said.
They felt the Commodores did a better job of that after taking a deep breath and having that message reinforced during the halftime break, and Irish said Rooney and fellow central midfielder Hannah Kelly dominated defensively and passed the ball decisively, while Ryley Olson also showed well.
“In the middle of the field, especially in the second half, we were winning the ball on a more regular basis. And Hannah and Emily were moving the ball well,” Irish said, adding, “we were creating better chances in the second half.”
Rooney made it 2-0 early in the second half, although Mitchell probably could have handled the Commodore’s drive from the 18 better — it trickled in off her hands in the fourth minute.
Mitchell (14 saves) also dove to deny a 24-yard Rooney free kick later, and Rooney also hit the crossbar. Mitchell also denied Sydney Weber near the right post after a strong serve from the left side from Felicia Poirier. Poirier’s run was set up by a diagonal ball from Rooney, and Irish said the Commodores need more poised attacking plays like that moving forward in the postseason.
“The biggest thing is that composure, and recognizing when you have the space, take it, and when the shot is there, take the shot. It’s doing the right thing in the right moment, and when we get the ball to the end line, sliding the ball to the six,” he said.
And while the coaches would like to see more on offense, they also believe the Commodores’ performed well overall and bounced back effectively from a tough loss at Mount Abe in their regular season finale.
“We were definitely itching to play, and a win in the playoffs is a win, and there was a lot to like. We just need more of it. But a win always boosts your confidence, and (also) to come off the field with a shutout and that amount of shots,” Irish said. “I think we feel good getting that under our belts.”
Andy Kirkaldy may be reached at andyk@addisonindependent.com.