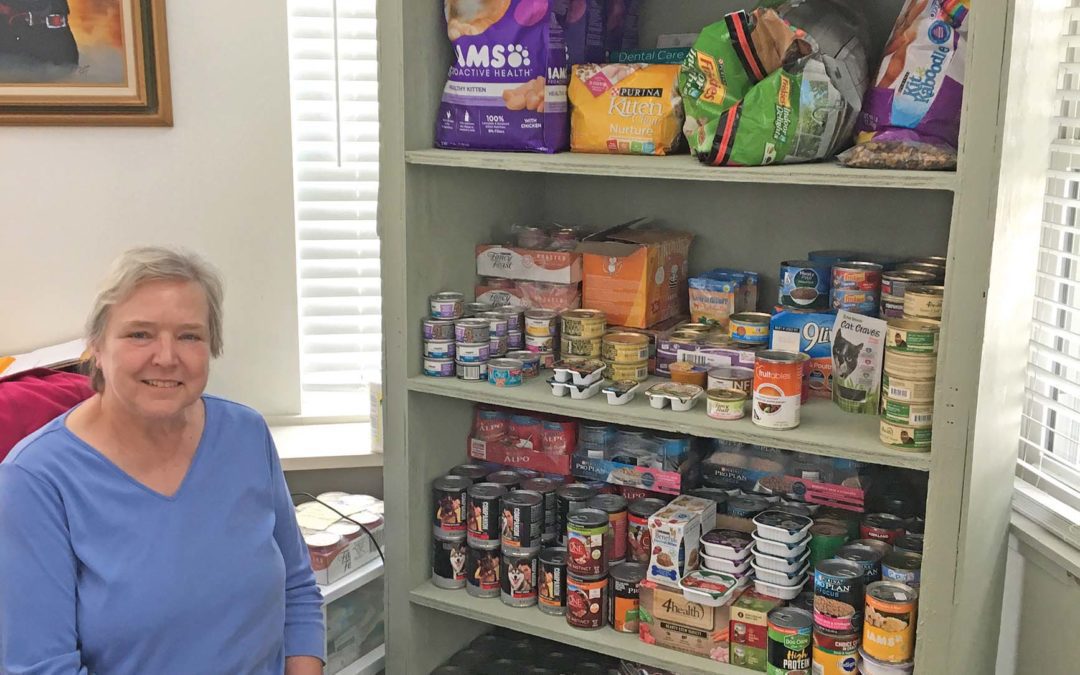 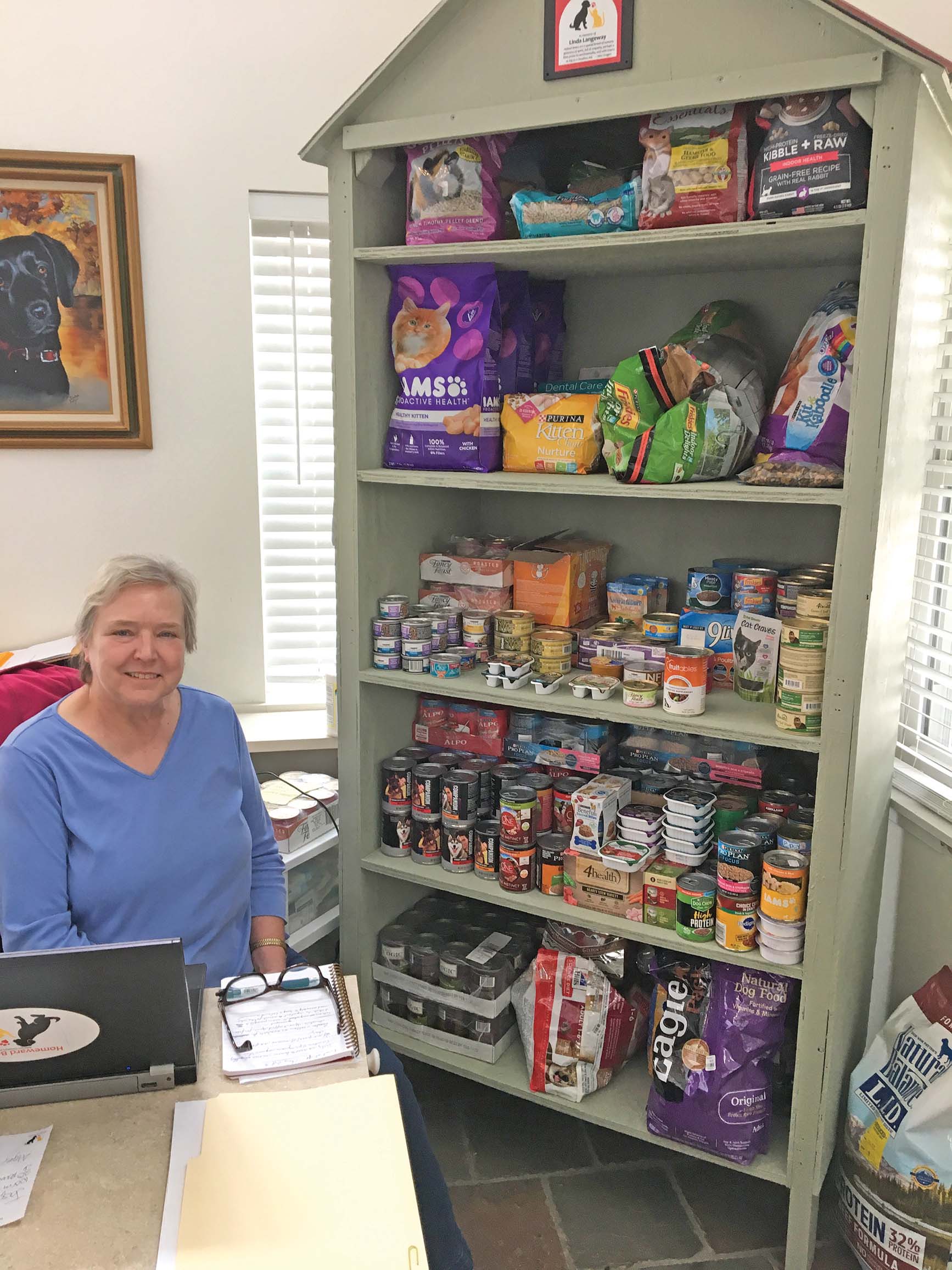 PEGGY FISCHEL IS one of six volunteers who staff Homeward Bound’s new HUB program that offers supplemental food, parasite preventatives and medical-care subsidies for the pets of qualifying low-income families.
By John Flowers

MIDDLEBURY — Homeward Bound, Addison County’s humane society, has launched a new program that will help low-income residents having a tough time affording their beloved pets.
It’s called the HUB, and it provides supplemental food, parasite preventatives and subsidies for qualifying folks to get medical care for their pet dogs and cats. Client households must have an income no greater than 200 percent of the federal poverty guideline, which is currently $51,500 for a family of four.
The HUB owes its existence to generous donations, grant support, volunteers and hard work by Homeward Bound staff, led by Executive Director Jessica Danyow. Officials had surmised that some local households were having a hard time affording care for their pets while struggling to pay rent, health care costs and food for human members of their families. That notion was backed up by an online survey that Homeward Bound circulated to its audience.
“It ranged from everything from food to vet care — the basic needs,” Danyow said of the survey, which also emphasized such needs as expanding pet-friendly housing in Addison County. “The takeaway we got is that we should not only be focusing on the homeless pets, but also on the pets who have homes already, but whose owners need a little support to continue to offer a good home.”
Homeward Bound staff began planning a small pet-food pantry in the organization’s headquarters at 235 Boardman St. that would also offer flea/tick preventatives and de-worming products. They recruited volunteers — like Peggy Fischel — to donate a couple of hours a week in managing the HUB. Clients can also submit requests to help subsidize medical care for their cats and dogs, with emphasis on controlling the pet population.
“We are asking applicants to work with us to get their animals spayed and neutered, if they aren’t already,” Danyow said. “Also, we’re asking that they not acquire new pets while receiving HUB assistance. Admittedly, that’s a difficult thing to enforce, and we’re relying on people’s good faith. We want HUB’s resources to extend as far as possible. It doesn’t make sense to turn it into something that enables massive pet ownership.”
Clients are also asked to voluntarily withdraw from the program if their incomes rise.
“We want to recognize that people’s economic circumstances fluctuate,” Danyow said.
HUB is currently helping 14 area families, a number officials expect will rise during the coming months. Clients are granted monthly access to HUB’s pantry/service center, open Monday through Friday,  9 a.m. to 11 a.m.
The first-year budget for HUB is around $7,000, according to Danyow.
“The first year of the program will tell us how much demand there is,” she said. “I’m curious to see what next year will bring.”
Donated dry and wet pet food is always needed, as are financial contributions. Checks should be made payable to Homeward Bound, with “HUB” in the memo line.
The past few years have seen Homeward Bound’s animal-intake numbers decline, a pattern that can be seen throughout New England, according to Danyow. Much of that has to do with folks being more conscientious about having their pets spayed or neutered.
With fewer local unwanted animals to care for, Homeward Bound has been able to rescue dogs from southern states that have shelters that kill animals if they aren’t adopted within a set period of time. Danyow commended IPJ Real Estate for its generous support for this program, through which up to 200 dogs each year are rescued from Southern kill shelters.
“It’s a win for the animals, it’s a win for Homeward Bound supporters, and it’s a win for the shelters down south,” Danyow said. “I like it because it shows people aren’t worrying about a county or state line when it comes to this problem. We’re just saying, ‘How can we fix it?’”
Homeward Bound has a great success rate pairing its sheltered animals with loving families. The organization also allows folks to foster animals and subsidize their care over a period of time. Homeward Bound has “re-homed” 107 dogs thus far in 2019. The organization serves an average of around 900 animals each year.
“If we’re doing a better job controlling overpopulation — and there are fewer animals in need of homes — so what’s the next thing we can do to support the human-animal bond?” Danyow asked. “(The answer) is to provide resources to pets that are already owned.”
Hence, HUB.
“One of the things we want HUB to do is help owners feel proud of what they can give their pets,” Danyow said. “I shudder at what it would feel like to know my pet needed something and I just didn’t have the money for it.”
Danyow received a call late last month from an elderly woman who was out of pet food and said she wouldn’t have any money for a few days.
“What would that feel like to love something and not be able to provide for it?” Danyow said, placing herself in the woman’s shoes.
Peggy Fischel was staffing the HUB this past Thursday. A retiree and lifelong pet lover, she wanted to donate her time to enhance pet ownership opportunities for those less fortunate.
“I think pets are such a comfort to so many people,” Fischel said smiling.
Reporter John Flowers is at johnf@addisonindependent.com.