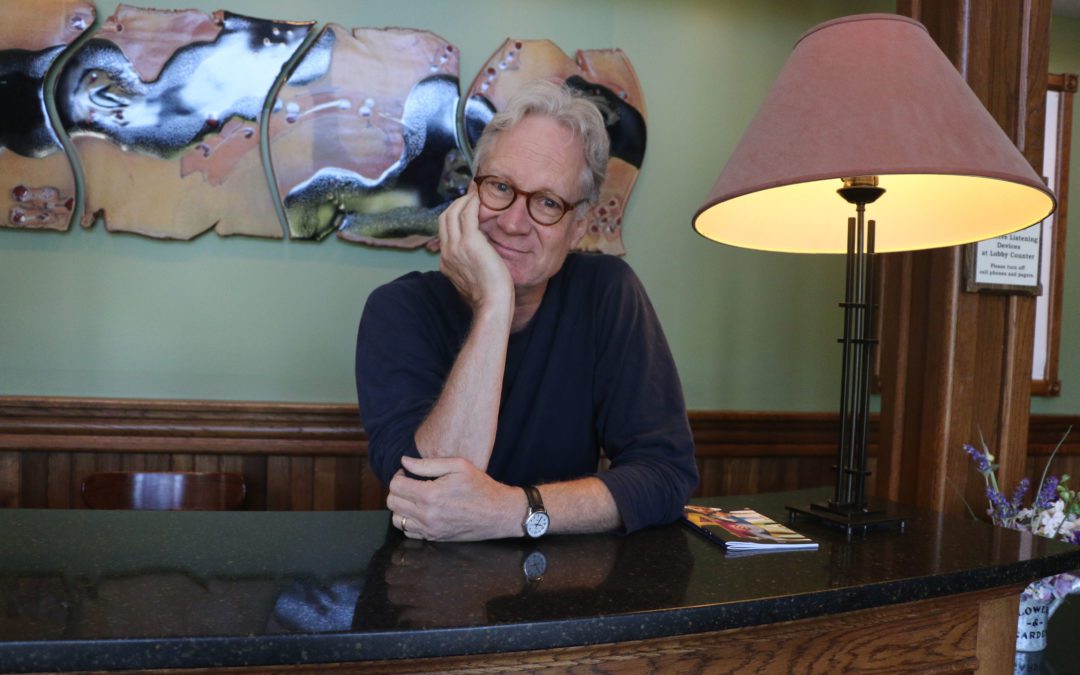 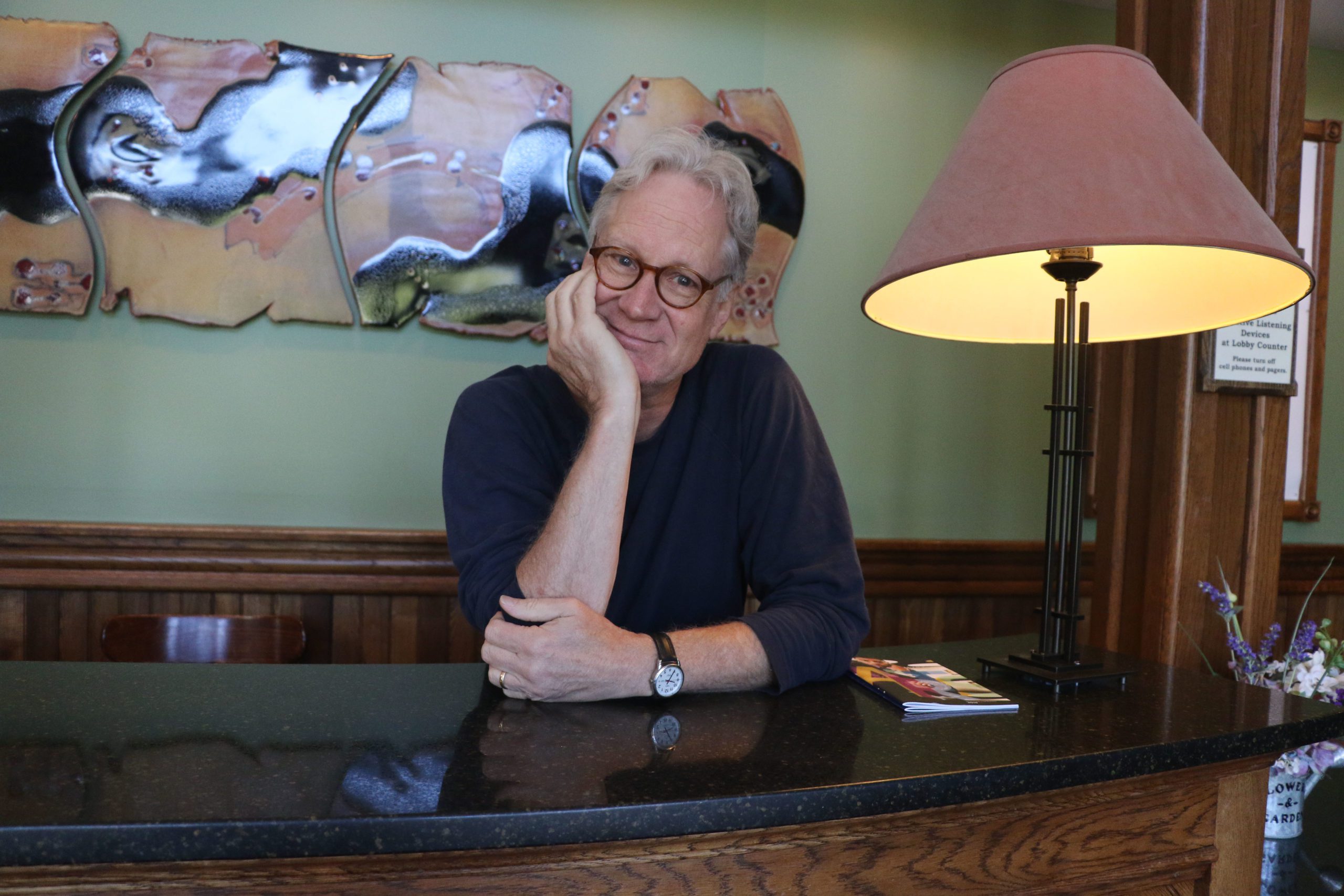 TOWN HALL THEATER Artistic Director Douglas Anderson recently won a statewide award from the Vermont Arts Council for his many contributions to the Middlebury theater and to the community at large.
By John Flowers

MIDDLEBURY — Douglas Anderson has had an eclectic professional career.
Educator.
Writer.
Producer.
Director.
And let’s throw in “quote machine” for good measure.
“You make plans for the future, but the future is something that happens to you,” the ubiquitous founder and artistic director of Middlebury’s Town Hall Theater said last Tuesday of his unscripted career path.
Little did Anderson know in 1997, when the Town Hall Theater (THT) was a mere concept scribbled in his notebook, that 22 years later he would be receiving a statewide award for his contributions to the arts and to his community. Earlier this month he was named 2019 winner of the Arthur Williams Award for Meritorious Service to the Arts, conferred each year by the Vermont Arts Council. Nominees must, among other things, have a local or statewide reputation in their chosen field, and have “significant standing” in a Vermont community.
Anderson — who still doesn’t know who nominated him — fits the bill on all counts.
He expressed delight with the award, but as always credited others who helped achieve the success for which he has been credited.
“If you write a novel and get an award, you won that on your own,” Anderson said. “If you save and revive a theater, it can only happen with literally hundreds of people. I can think of 25 key people who were with it from the very beginning. And without any one of those people, there would have been no award, because we never would have gotten there.”
Anderson and his merry band thought it would take two years and $1 million to make the THT show-worthy.
It actually took 10 years and $5 million to acquire and fix the building, an 1883 structure at 68 South Pleasant St. that once served as Middlebury’s town hall, a movie theater, a restaurant and headquarters to the local Knights of Columbus.
“The building was in far worse shape than we expected,” Anderson explained. “I thought we could put the stage at one end and put a little heat in there, and off we go. We kept on learning, ‘no, no, no.’ But the nice thing is that the people who were committed (to the project) stayed with it. And there were some scary times, when we wondered if we were going to raise enough consciousness and money to make this happen.”
Fortunately, he and his colleagues were not lacking in confidence. Anderson knew how to write, to teach, to direct, to get people in the right costumes.
“This may sound cocky, but I knew that day (in 1997) that I could do this,” he said. “I was so lucky to find it. I have no idea what I would be doing right now if I hadn’t come in here that day.”
He leaned on his background, experience and the talents of others who also saw the building’s potential. Anderson’s past jobs included teaching theater and playwriting at the University of Illinois, Amherst College and Middlebury College. He also served as a staff writer for the Children’s Television Workshop (the makers of “Sesame Street”) and head writer for the CBS daytime drama “The Guiding Light.”
Methodically and painstakingly, the crew obtained the permitting and financing needed to give the THT a major makeover, in keeping with its special architecture and history. They chipped away until the theater was ready for its grand opening in 2008. It has since faithfully served as a local hub for the performing and visual arts.
For his work on THT, he was named Middlebury’s Citizen of the Year, received an award from the Preservation Trust of Vermont, and was presented with the McCardell Citizenship Award by Middlebury College.
“We are so proud of Doug receiving this accolade,” said THT Executive Director Mark Bradley. “I’m continually astonished by what he and our team have created with Town Hall Theater, and it has been such an honor to work alongside him. The Vermont Arts Council could not have picked anyone more deserving than Doug for this award. His never-ending hard work, energy, and dedication to the community will always be an ongoing source of inspiration for me.”
Anderson served as THT’s first-ever executive director until last year, when Bradley took his place. This allowed Anderson to focus on his true love — producing and directing performances, including dramas, comedies, musicals and operas. He created the Opera Company of Middlebury, now in its 16th season.
“The irony is, I got rid of half of my job and that has enabled me to be busier than I have ever been,” he chuckled. He recently worked on three separate productions in a single day.
Indeed, one wonders how Anderson has time to read a book, let alone take a vacation.

LATEST MUSICAL
This year will see him direct seven separate productions, the latest of which is the musical “Hands on a Hardbody,” which took the stage at THT Sept. 20-22. Created by Trey Anastasio of the band Phish, it’s the true story of a competition in which 10 people had to each keep one hand on a new truck, in 110-degree heat. The last one standing won the truck. By the end of the musical, we know everything about each one of the 10 competitors.
Anderson is proud of how “Hands on a Hard Body,” is shaping up. It epitomizes the amount of homegrown talent in the county and the extent to which Anderson has been able to recruit and nurture those impressive actors and singers.
“This cast is made up of people who have performed (at THT) for the past 10 years,” Anderson said. “We put together a musical in three weeks. I knew I had a stable of stars who would come out for it.”
While other small community theaters seem to be in constant survival mode, the THT is solvent with a strong base of support. The organization has raised $1.5 million (and counting) for an endowment fund, the interest from which will help pay salaries and much-needed maintenance for the theater.
Anderson, Bradley and the THT board are always considering ways to enhance the organization’s facilities and mission. When the adjacent Diner property came up for sale, THT boosters raised the purchase price in short order. They reasoned the site could someday allow for expansion.
“This building was too small from the moment we moved into it,” Anderson said. “We’re thrilled to have (The Diner property), and now we can start to think about larger needs — everything from storage, to increased rehearsal space to perhaps some sort of restaurant/performance space. There are all kinds of possibilities.”
Town Hall Theater will continue to thrive with its winning formula of accommodating a variety of shows, community events and of course wedding receptions, reunions and other revenue producing activities. There’s something going on at THT approximately 350 days each year, according to Anderson. The foundation of its programming will continue to be quality shows built on a level of professionalism that patrons have come to expect from Anderson productions.

‘OUTSIDE THE BOX’
Every year brings new challenges, and next year will present a doozy.
The THT curtains will likely stay closed for an unprecedented three months next summer, during the most intensive phase of the downtown Middlebury rail bridges project. Main Street and Merchants Row will both close to traffic for 12 weeks while workers install a 360-foot concrete tunnel that will supplant the two spans.
“We can’t risk not only plays being drowned out by drilling, but imagine booking a wedding… and suddenly it’s ruined because of blasting next door,” Anderson said. “There’s no question we’ll be taking a pretty heavy financial hit, and that’s a case we’ll have to make to the community.”
But that doesn’t mean the show won’t go on. Theater officials will look to deliver entertainment at other local venues. Middlebury College, for example, has agreed to allow use of its Wright Theater for Middlebury Opera Company performances next summer.
“This is an opportunity for us to literally think outside the box,” Anderson said of the construction disruption.
He holds many fond memories of his time with THT.
There was the day the former Town Hall bell was discovered and reinstalled at the top of the THT, with then-U.S. Sen. Jim Jeffords looking on. There was opening night for THT, which created such demand that Anderson held a second ceremonial debut for the building. And there was a special gathering last year for the 15th anniversary of the Middlebury Opera Co., which drew alumni voices from all corners of the country. They all performed for free.
It’s the special occasions that remind Anderson how fortunate he’s been to win awards and to be involved full-time with community theater.
“We’re all born with a skillset,” he said. “And if you can find a project or a job that perfectly matches your skillset, you are blessed. I remember thinking in 1997 when I walked in here and looked around and thought, ‘This project perfectly matches my meager skillset.’”
Benj Deppman, chair of the THT board, congratulated Anderson for the recognition he received from the Arts Council.
“Doug is amazing, and so very deserving of the Arthur Williams Award,” he said. “He has contributed to the arts in so many ways for so many years.  We know he is the heart and soul of Town Hall Theater, but the truth is his service to the arts reaches much farther than just this town or this county. He is a treasure, and we are lucky to have him supplying us with so much entertainment and culture. It’s great that he has been recognized with this award.”
Reporter John Flowers is at johnf@addisonindependent.com.