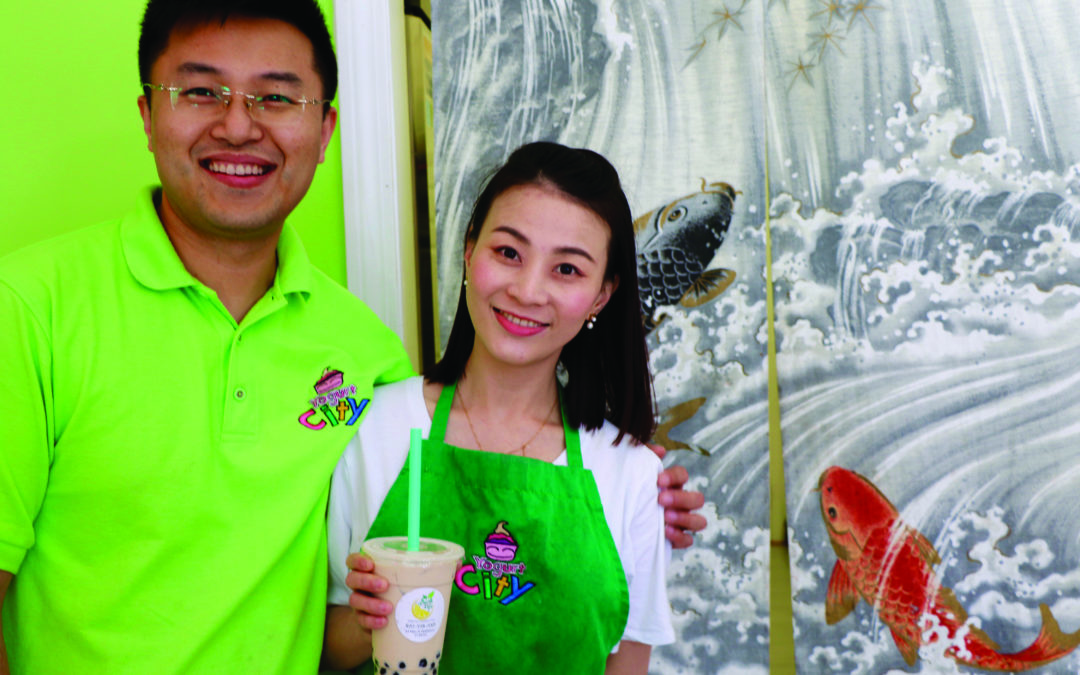 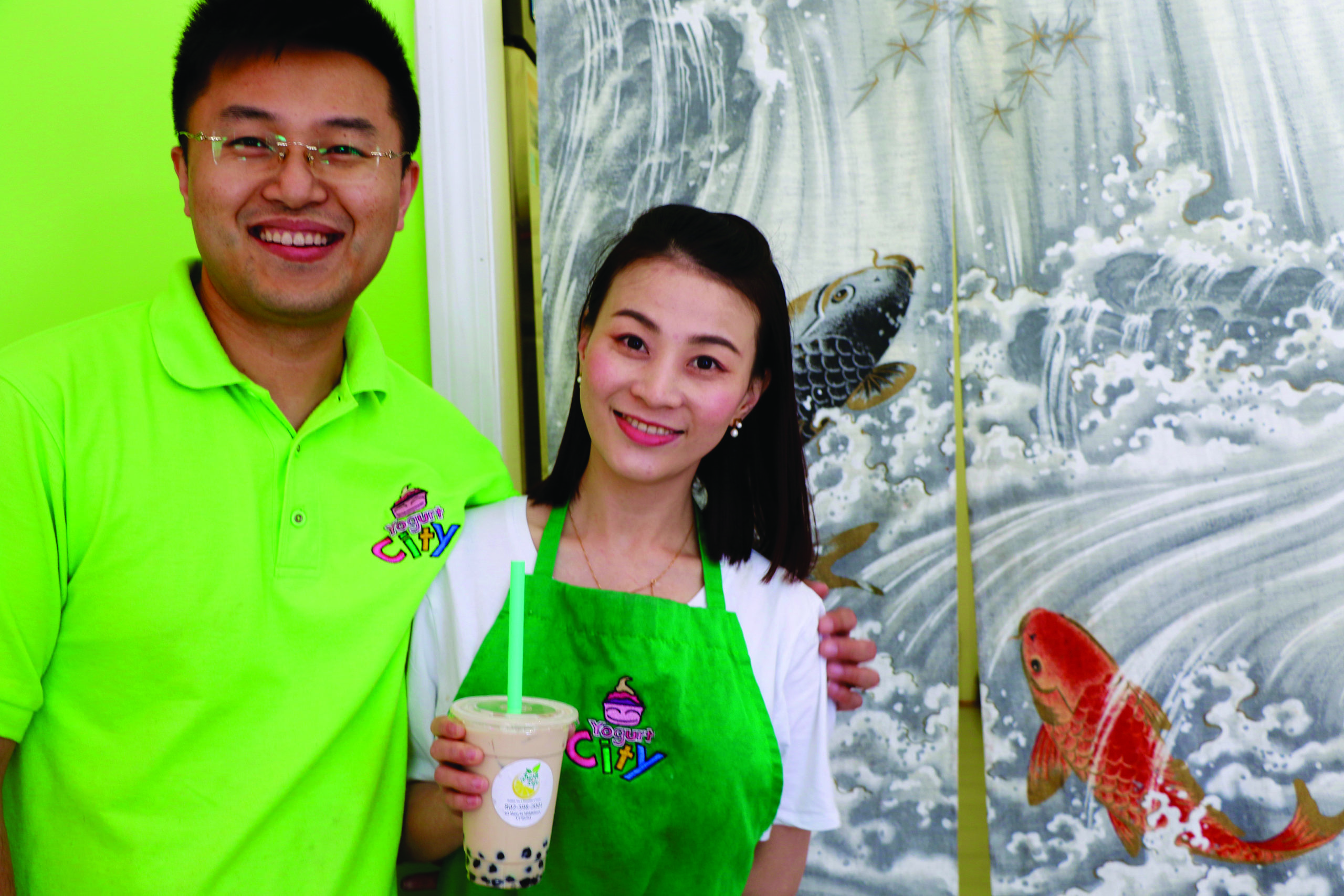 MIDDLEBURY — It’s Fourth of July – time for parades, barbecues, fireworks. Of course, nothing goes better with this trio than a refreshing sweet treat. But, instead of a classic creemee, why not try something a little different this year?
Something that’s sweet, milky, has a variety of flavors and the thrill of slurping one jelly ball after the next through probably the widest straw you’ve ever seen.
What is this magical concoction? Bubble tea, a tea-based drink typically mixed with milk or fruits, sugar, and topped off with tapioca balls. The drink, first created in Taiwan in the mid-1980s, has now made it all the way to downtown Middlebury.
Husband and wife team Andy and BingBing Li have been serving frozen yogurt at Yogurt City for four seasons. This summer will be their first offering bubble tea, along with milkshakes, smoothies and other beverages.
The Main Street shop, next to the Marquis Theater, has always attracted locals and college students alike. Now, customers are flocking to the store to experience the expansive new menu. The Lis sell bubble teas in traditional flavors like green or black tea, but the options also extend to more original flavors like chocolate or strawberry.
Li and his family first immigrated from China in 1997 to join his family’s restaurant business in Burlington — originally No. 1 Chinese Restaurant, now renamed Fuda. After living in the Queen City for a few years, the couple searched for a location to open a second restaurant, and found a space on Seymour Street where they opened China House.
In May 2014, the family made the transition from Chinese cuisine to frozen yogurt; they closed China House and opened Yogurt City. Li cited demand from college students as the main reason for the addition of bubble tea this March.
Don Wyatt, Director of East Asian Studies at Middlebury College, sees this demand as a reflection of how Middlebury College students influence the town.
“The college is an international institution, which has contributed to the local community becoming more international,” he said.
Li was also inspired by a new bubble tea shop in Burlington at the time, that found great success in selling the beverage. “And, the combination seemed to be good — frozen yogurt and bubble tea,” he added.
So, Li and his wife drove down to New York City in February to partake in a professional bubble tea-making course. They learned about the traditional flavors and preparations, and now order all their bubble tea supplies directly from the company they trained with.
At the time of their training, bubble tea had already spread from Taiwan to cities like New York and San Francisco, and become a global phenomenon.
The drink is an emblem of national pride for Taiwan, “largely because it is definitively Taiwanese,” explained Wyatt. “It has become an important symbol for youth culture worldwide, as well,” he continued.
The tea is “something that people of a small island nation can give to the broader world,” Wyatt said. Wyatt personally enjoys the matcha flavor — the finely ground powder of Japanese green tea leaves. “Among the things I appreciate about it is that it is usually made with something other than cow’s milk… and also its versatility, being equally tasty whether hot or cold, in winter or in summer.”
“I want to share bubble tea with people,” said Li — plain and simple. “Some people have never even heard of it, and it’s so popular in Asia.”
Li added that he feels he is bringing something new and different to Middlebury with his business; he provides curious customers with samples and has found that “a lot of people try it and love it.”
Middlebury College student Jackson Evans is one of many appreciative customers. “I come from a place (Melbourne, Australia) that has a large southeast Asian influence, and being able to connect back to home through bubble tea is something that is very impactful on my wellbeing at Middlebury,” Evans said.
“The vegan options and well cooked bubbles remind me of home and the staff is incredibly friendly, and willing to help me with my Chinese,” he added.
“Cuisine is one of those areas where we are seeing the greatest amount of cultural convergence worldwide,” Wyatt said. “People are at ease, even eager, to sample the cuisines of what in earlier times would have been alien cultures. To me, as a historian, that’s something I view as progress.”
For a long time, Chinese restaurants and businesses were ghettoized to particular areas like Chinatowns, Wyatt recounted. “But we have moved beyond that now, such that many Asian cuisines have become part of the national landscape.” Wyatt sees this as indicative of a convergence of cultures, and a step in the right direction.
Beyond the cultural significance of the store, it also serves as a gathering spot day-to-day for locals to enjoy something delicious. Li is proud that his business makes the downtown of “a very quiet town, more lively.”
The new beverages have brought more business to the store. “We’re doing very well — a lot better than when we were just selling frozen yogurt,” Li said, adding that he hopes to continue broadening customer’s culinary horizons and serving refreshing drinks through the hot summer months.
Never had bubble tea before? Stop in and slurp down some sweet tapioca balls with a side of cultural convergence.