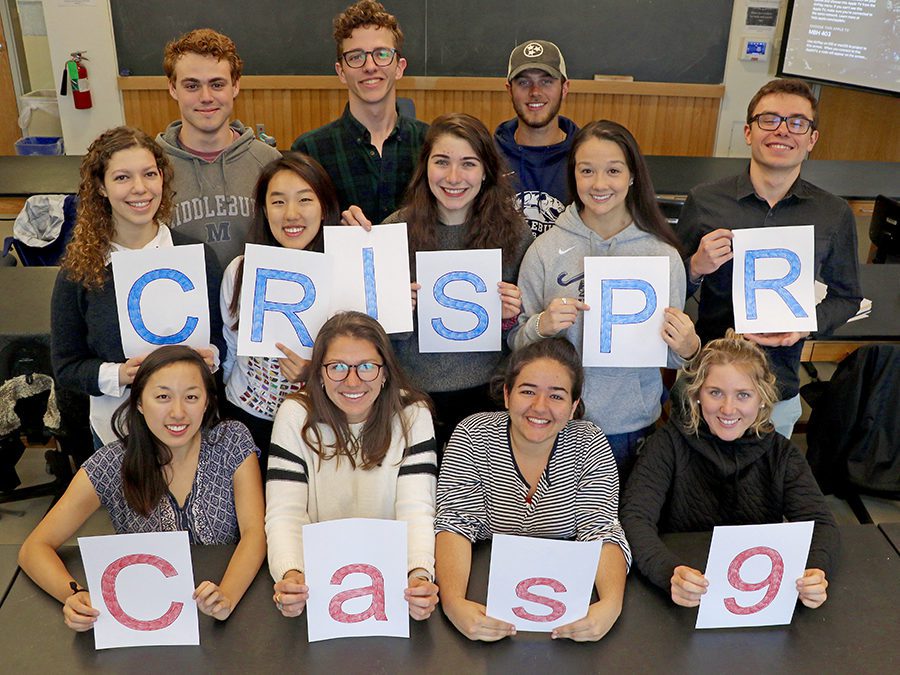 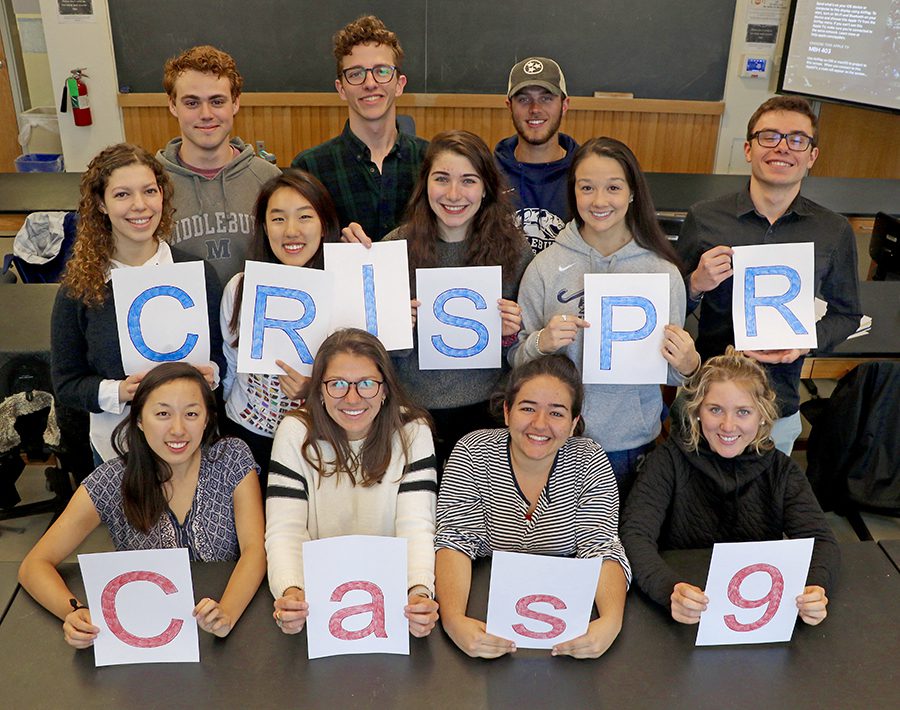 THE 12 MEMBERS of Professor Lindsay Repka’s CHEM 0322 - Biochemistry of Macromolecules course at Middlebury College this spring studied CRISPR, the gene-editing technology, and produced a multimedia package for Independent readers that explains the science, measures the interest of the general public in GMOs and offers reasons why regular people should care. Members of the class who are, from left, back row, Liam Bent, Will Kelley and Hayden Smith; middle row, Cleo Davidowitz, Ashley Wang, Emma Norton, Anna Goldstein and Anthony Bongiorno; and front row, Jeanelle Tsai, Emma White, Luna Gizzi and Chloe Levins. Independent photo/Steve James
By Students in Chem 0322 at Middlebury College

MIDDLEBURY — Gene editing is a fairly new technology but it has already breached most everyone’s day-to-day life in the form of genetically modified organisms, more commonly known as GMOs. However, this advanced technology is still somewhat obscure to the general public, including our own community in Middlebury. By surveying 109 people from Middlebury College and the greater Middlebury community, we found that 75 percent of participants had heard of gene editing and had some idea of what it is, and 25 percent of people either hadn’t heard of it or didn’t know what it was. When the residents of Addison County hear the term “gene editing,” quite a few images come to mind. Some people see an advanced futuristic technology that is only used in the most prestigious laboratories in order to artificialize plants and people. Some think about GMOs, which have become quite popular and common in grocery stores. Some people imagine a world where parents can edit the DNA of their unborn children to access “designer babies,” choosing traits such as hair color or height. The commonality among most Addison County residents was their curiosity about what gene editing can be used for, and what the ethical implications are.
In 2012, a group of scientists realized that they could harness bacteria’s immune system and use it to edit genes in a cheap, efficient, and precise manner. Their creation — commonly known as CRISPR — is a technology that has made gene editing much more accessible. In fact, it seems like CRISPR’s possibilities are endless. Scientists have proposed using CRISPR to eliminate mosquitoes, the deadliest organism on earth. They have also investigated using CRISPR to cure HIV. In the realm of agriculture, scientists have edited fruit for economically incentivized purposes, like increasing the size of tomatoes to create a “supertomato,” but they have also used CRISPR to give plants, such as bananas or papayas, immunity from rampant viruses that have the potential to wipe out entire species.
This new gene editing technology has the potential to change the trajectory of life on earth. CRISPR could eliminate the most dangerous diseases, such as HIV or certain strains of cancer, but it could also be used for ventures like “designer babies” that many people think are unethical. With a tool this powerful in our hands, it is important to talk about how we will use CRISPR and it is important that all of us are part of these conversations. Whether or not we morally agree with all of its uses, CRISPR has the potential to affect us all. Although 75 percent of polled Addison County residents had some idea of what gene editing was, only 35 percent of them were familiar with CRISPR. Our hope for this piece is to help spread knowledge about CRISPR and to start a conversation with the residents of Addison County so that we, as a community, can engage with the future of CRISPR gene editing.
Click on the following links to read more:
The workings of CRISPR
At first glance, CRISPR may seem like a groundbreaking, never-before-seen technology, and in some ways it is. However, the basic principles behind CRISPR and other gene editing technologies date back thousands of years.
Why you should care about gene editing
With the expansive genome sequencing of humans, animals and plants, researchers now have access to information that would allow specific manipulation of gene sequences. Using CRISPR technology, selected genes can be altered. This has incredible implications for the future of humanity as well as our ecosystems and earth as we know it.
Gene editing raises social, political and science issues
How can we use CRISPR technology in medical practice without risking the possibility of someone taking it too far? How do we draw the line between what is beneficial and what is not?
Watch the cool video — made by the Midd students — for a different way of explaining CRISPR.
Check out interviews (below) with Danielle and Chase Goodrich of Goodrich Family Farm in Salisbury, Seth Ross of MoSe Farm in Orwell, and Ross Conrad of Dancing Bee Gardens in Middlebury for their perspectives on gene editing in farming.

Danielle and Chase Goodrich on CRISPR

Beekeeper Ross Conrad weighs in on CRISPR; click to read what he has to say.