CRISPR: The workings of CRISPR

CRISPR: The workings of CRISPR

By Students in Chem 0322 at Middlebury College

At first glance, CRISPR may seem like a groundbreaking, never-before-seen technology, and in some ways it is. However, the basic principles behind CRISPR and other gene editing technologies date back thousands of years. When farmers first began selectively breeding the best plants and animals to achieve the most desirable traits in their offspring, they unknowingly took the first steps on the path to gene editing.
Like gene editing, selective breeding seeks to change an organism’s physical attributes through the process of manipulating its genetic make-up. Although selective breeding is effective at introducing dramatic genetic changes in species of plants and animals, it is a long and tedious process, requiring many generations of selection to attain the most desired characteristics.
Thus, the invention of GMO (genetically modified organism) technology in 1973 was a revelation; by “cutting out” a desired gene from one organism and inserting it into the genome of another, scientists could achieve the results of hundreds of years of selective breeding in a relative snap of their fingers.
However, this method of creating hybrid DNA sequences, also known as recombinant DNA, has its drawbacks. Because the “donor” gene is inserted into an organism’s DNA at an unpredictable spot in the genome, the gene might insert itself somewhere that would render it useless, or worse, somewhere that would change the function of other genes, potentially leading to new harmful or undesirable side effects.
In order to solve this problem, scientists needed to find a way to target the incorporation of DNA to a specific, desired site. Almost 40 years after the first GMOs were developed, scientists developed CRISPR gene editing and immediately recognized in it the potential to enable precise changes to DNA.
HOW CRISPR WORKS

Interestingly, scientists didn’t invent CRISPR; they repurposed an existing immune system in bacteria for gene editing. The acronym CRISPR is short for “Clustered Regularly Interspaced Short Palindromic Repeats.”  More specifically, the CRISPR region of DNA found in many bacterial genomes contains short sections of DNA called “spacers” interspaced with regions of DNA called “palindromic repeats.”
DNA is made up of four “bases” (represented by the letters A, T, C and G) and the palindromic repeats have a somewhat palindromic arrangement of those letters — e.g. GTTTTAGAGCTATGCTGTTTTG. Ultimately, the CRISPR region of bacterial genomes is converted into pieces of RNA. In all organisms, DNA stores genetic information but the functional form is RNA, which differs from DNA by one base (it has “U” instead of “T”). The “CRISPR RNA” pieces each contain one spacer and one palindromic repeat. CRISPR gene editing uses these same pieces, except that the spacer is designed to modify an organism’s genes, whereas in bacteria the spacer is designed to target viruses for destruction. 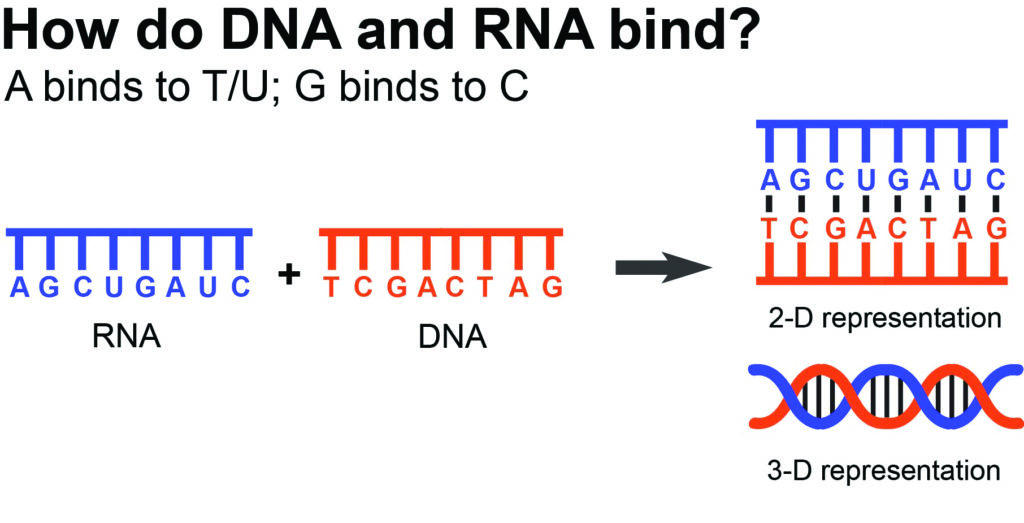 The spacer and the palindromic repeat of CRISPR RNA have distinct functions for gene editing. The palindromic repeat binds to another piece of RNA called “tracrRNA” to form a complex called “guide RNA.” The spacer is designed to bind to DNA at the site to be edited within a gene. It is easy to design a spacer to bind to a specific sequence of DNA letters because the binding is so predictable. When RNA and DNA bind together, forming a double helix, the same bases always pair: A binds to T/U, and G binds to C.

For CRISPR gene editing to happen, four components are needed: guide RNA, the protein called Cas9, a gene to modify, and a synthesized piece of replacement DNA to modify the gene. With these four components in mind, let’s break down this process of gene editing.
First, guide RNA binds to the gene, through its spacer, and “guides” the protein Cas9 to that site in the gene. Cas9 then cuts the gene. Once the gene is cut, the natural repair mechanisms of the organism take over. Through a process called “homologous recombination,” DNA letters are removed at the site of the cut and the replacement DNA is pasted in to form the edited gene.
CRISPR is a new era in gene editing. Unlike traditional gene editing, which results in random incorporation of genes, CRISPR-Cas9 is a precise gene editing technology. Cas9 is precise in where it cuts a gene, and the change to the gene is precise, because the guide RNA brings Cas9 to the desired site. Moreover, the CRISPR technology is incredibly versatile. CRISPR-Cas9 can be easily designed to target any site within any gene because of the basic rules of how DNA and RNA bind; A always binds to T/U, and G always binds to C.
This simple design also allows CRISPR RNAs to be produced inexpensively. With the development of CRISPR, the cost of changing an organism’s genes has dropped immensely. To summarize, CRISPR is precise, versatile and inexpensive, allowing for easy modification of genomes with a previously unimaginable level of precision.
This package was produced by Middlebury College students Emma White, Ashley Wang, Jeanelle Tsai, Hayden Smith, Emma Norton, Chloe Levins, Will Kelley, Anna Goldstein, Luna Gizzi, Cleo Davidowitz, Anthony Bongiorno and Liam Bent, under the direction of Lindsay Repka, Assistant Professor of Chemistry and Biochemistry. 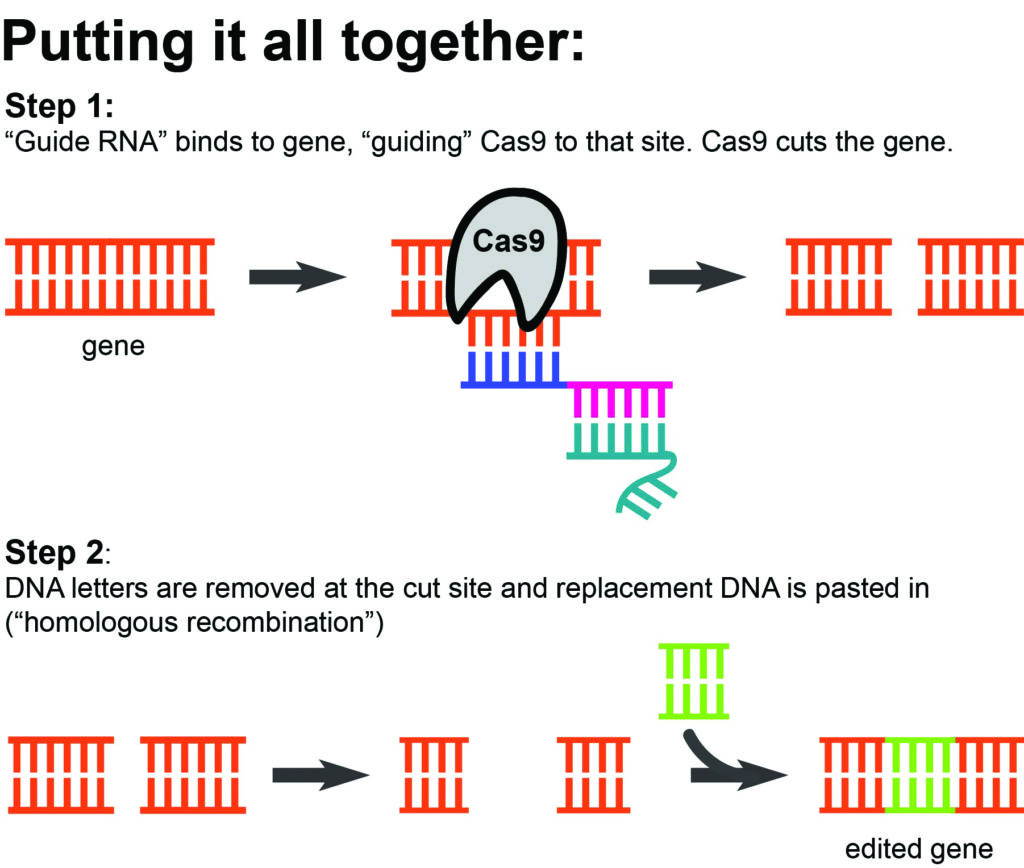