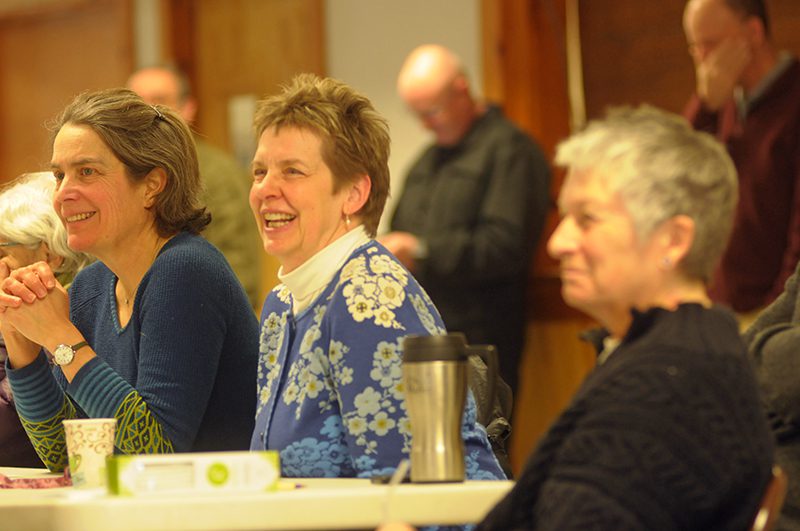 State Reps. Amy Sheldon, left, and Robin Scheu, both Middlebury Democrats, smile during a Legislative Breakfast in 2019. The weekly encounter of state lawmakers with constituents is not likely to happen this session unless an organizer is found. Independent file photo
By John Flowers

ADDISON COUNTY — Addison County’s long history of holding a series of weekly “legislative breakfasts” during each Vermont legislative session appears to be in grave jeopardy.

The legislative breakfasts were started by the Addison County League of Women Voters around a half-century ago, attracting the area’s members of the Vermont Senate and House of Representatives to provide updates to — and field questions from — their constituents. Recorded by Middlebury Community Television and covered by the Independent, the breakfasts have started at 7 a.m. and ended by 8:45 a.m., held in a rotating collection of venues throughout the county.

They were generally held on Monday mornings, because the Legislature usually meets Tuesday through Friday.

While the League of Women Voters founded and shepherded the legislative breakfast series during the early years, other organizations became involved in running the events — including the Addison County Chamber of Commerce, the Addison County Farm Bureau and Bridport Grange No. 303. It wasn’t uncommon to see more than 50 people sit in on the breakfasts during the 1990s and early 2000s, with virtually full participation from the county’s legislative delegation.

The annual series has also included a luncheon to discuss agricultural issues and a breakfast featuring the sitting governor as the main speaker.

But attendance has waned during the past decade. Some legislative committees have been calling members in for Monday morning work sessions. A core group of senior attendees has thinned out, with some passing on and others moving out of state. Also, the Farm Bureau and Grange several years ago diversified the venues for the series in hopes of accommodating folks in the smaller, rural towns. But that move lost some regulars who weren’t keen on driving to Orwell, Hancock and other remote sites.

The COVID-19 pandemic might have been the coup to grace for the breakfast series. Organizers suspended the series indefinitely early in 2020, when the coronavirus arrived in our area.

With the 2023 legislative session gaveled to order last week, the Independent reached out to the Grange and Farm Bureau for an update on the legislative breakfasts.

James Morse, a longtime officer of the Bridport Grange and a key organizer of the breakfasts, explained he’s no longer physically able to put in the work it takes to secure venues and moderators, and to transport equipment.

“I had hoped to bring back the legislative breakfasts, but I cannot do it alone (age and medical),” he wrote in an email. “I have not been able to find help to move and set up PA system.”

Tim Buskey, a longtime officer with the Addison County Farm Bureau, said the future of the legislative breakfasts will be discussed at the organization’s Thursday, Jan. 12, meeting.

“We’ll see if we can get some support at that meeting and then I’ll let you know,” Buskey said.