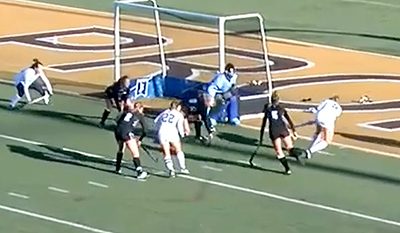 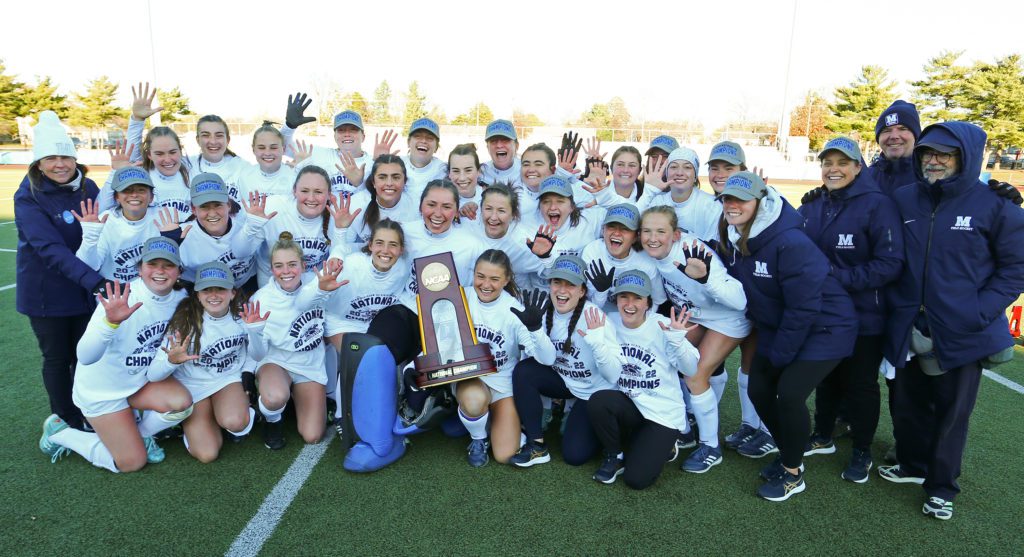 GLASSBORO, N.J. — This might have been the toughest final of them all, but in the end the result was the same: The Middlebury College field hockey team on Sunday won its fifth straight NCAA Division III title, 1-0, in overtime over Johns Hopkins. Rowan University hosted the final four.

The 21-1 Panthers completed a run through the NCAA tournament in which they did not allow a goal, snapped Johns Hopkins’s 16-game winning streak, and became the first team to score on the Blue Jays in the tournament.

The Jays gave the Panthers all they could handle on Sunday, at least for most of the game. At one point in the second half they were outshooting Middlebury, 4-3. But the final count favored Middlebury, 9-4.

One of those six unanswered Panther shots came from sophomore midfielder Amy Griffin with 2:33 remaining in the first 10-minute overtime, with the teams playing seven-on-seven.

Griffin attacked from the top of the scoring circle, carried toward the endline near the right post, and fired. The jury is out whether Griffin was passing to an open teammate at the left post or shooting, but there is no debate on the result: The ball deflected off a defender into the left side of the goal, and the Panthers celebrated the title and their first overtime victory of the season.

“That was a whole new experience,” said Griffin, the tournament MVP. “Of course we’ve been practicing that. It was fun to get to do that. I think the last moment, it was really a culmination of the entire team’s effort the whole game, all the fighting back we did, all the plays we did. It really culminated into that moment.”

Coach DeLorenzo credited Johns Hopkins for a strong defensive effort, and also cited her defense of Charlotte Marks in the middle and Emily Stone and Sadie LeStage on the flanks and goalie Grace Harlan (three saves) for another shutout.

“It was just a wonderful pair of teams going at it,” DeLorenzo said. “It was really wonderful just to compete on every possession, to compete just to get into our circle, and just to buckle down defensively because any trip for them into our circle could mean the game. And I think that’s what championship games are supposed to be.” 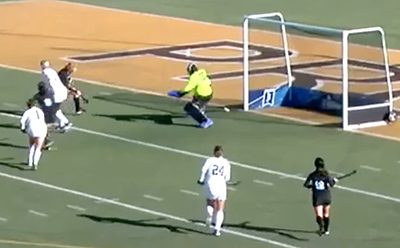 MIDDLEBURY GOALIE GRACE Harlan, shown guarding a Johns Hopkins shot in the first half of Sunday’s D-III Final in Glassboro, N.J., recorded her 25th shutout for the Panthers.
Image courtesy of NCAA

The Panthers possessed nearly the entire opening quarter, but Johns Hopkins did well to halt Middlebury in transition. Jay defenders Anna Scott and Liz Falterer were particularly effective tackling either just outside or just inside the scoring circle.

With 10:09 left in the half, the Jays recorded the first shot of the game, when Tessa Ericson tipped a long Olivia Fox bid wide. Less than two minutes later, LeStage forced a Panther corner, and Jay Abby Birk blocked Griffin’s shot.

The Panthers had an apparent Hanna Medwar goal called off midway in the third quarter. Then the Jays had their best stretch, when Harlan made a series of penalty corner saves on Ericson, Ava Balacek and Scott. Harlan hurt herself on the second save, but despite limping the rest of the game stayed on duty.

Marks talked about the Panther defense, which did not allow another shot after than sequence.

“Everyone is on the exact same page,” she said. “And G (Harlan) had an amazing save even after that little injury there. We just locked down, and we were going to protect our goalie.”

Middlebury dominated in the fourth quarter, but had just one real threat: On a late corner Loder denied Lilly Branka’s hard shot through traffic.

Loder (seven saves) then kept the Jays alive in OT, stopping a Griffin backhanded attempt and LeStage’s one-timer on the rebound, and then Caroline Lantzy from the top of the circle on a penalty corner. But the Blue Jay goalie could do nothing about the bounce off her teammate with 2:33 left in the first OT.

On Friday, Lazar’s hat trick help propel the Panthers past No. 3 Rowan, 4-0. Middlebury attacked quickly, and only a defensive save by Rowan’s Liz Fox denied Katie George in the second minute after she moved around Prof goalie Abby Hainsworth.

About two minutes later Lazar gave the Panthers the lead. George again carried in from the left and fed Lazar  between the stroke line and the left post. Hainsworth saved Lazar’s first bid, and a defender blocked her second. But Lazar flicked the second rebound into the cage’s left side.

The Profs had a chance on a penalty corner late in the period. Marks blocked Vanessa DiDonato’s shot from the top of the circle, and Harlan knocked away Tess Herman’s rebound bid and from inside the stroke line.

Middlebury made it 2-0 with just less than three minutes remaining in the first quarter. Branka carried down the left and crossed to Lazar, who reverse-sticked the ball home from the middle of the circle.

Early in the second, George sprinted down the field to set up Lazar on a breakaway, but Hainsworth ranged out of her goal to snuff the bid. Harlan made a big save late in the period, stopping Bridget Guinan from point-blank range.

After the break, Harlan kicked away a bid by Julia Cavicchio on a corner. With 11:28 left in the third quarter, Lazar made it 3-0 by tipping a Murphy shot inside the right post.

In the fourth period, Harlan denied DiDonato and Julia Patrone; she finished with six saves, while Hainsworth made eight.

Middlebury made it 4-0 with 3:48 to go in the game, when Caroline Segal tucked home a backhanded shot after a Georgianne Defeo steal.

Including both Friday’s win over Rowan on its home field and Sunday’s win against a team on a 16-game winning streak in freezing conditions, Griffin on Sunday spoke about the Panthers’ focus.