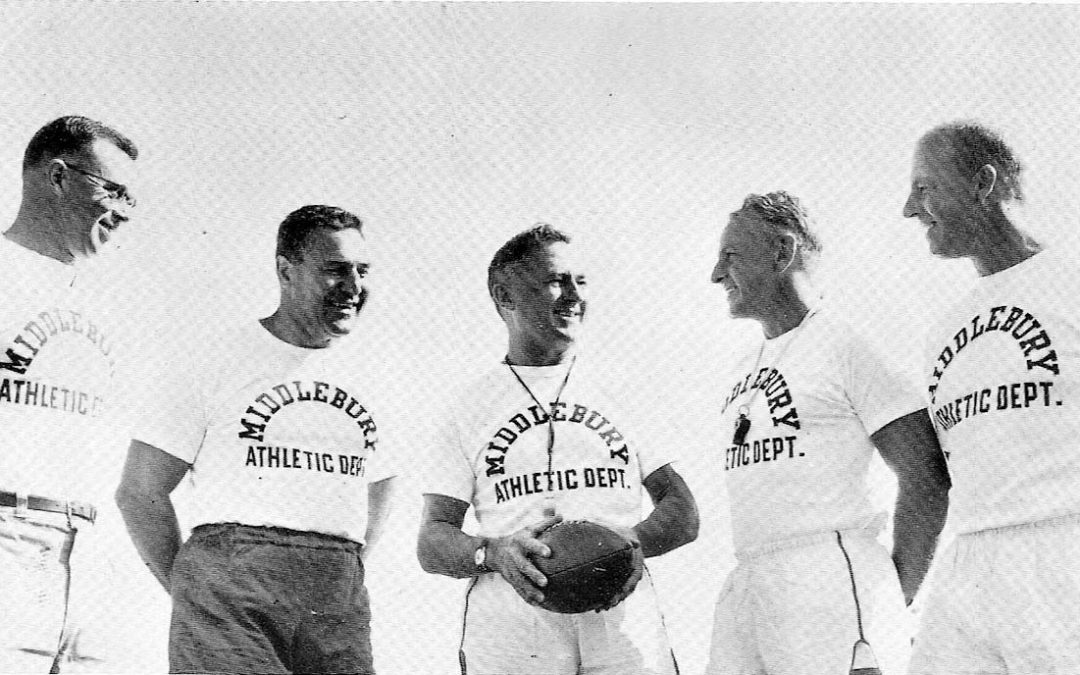 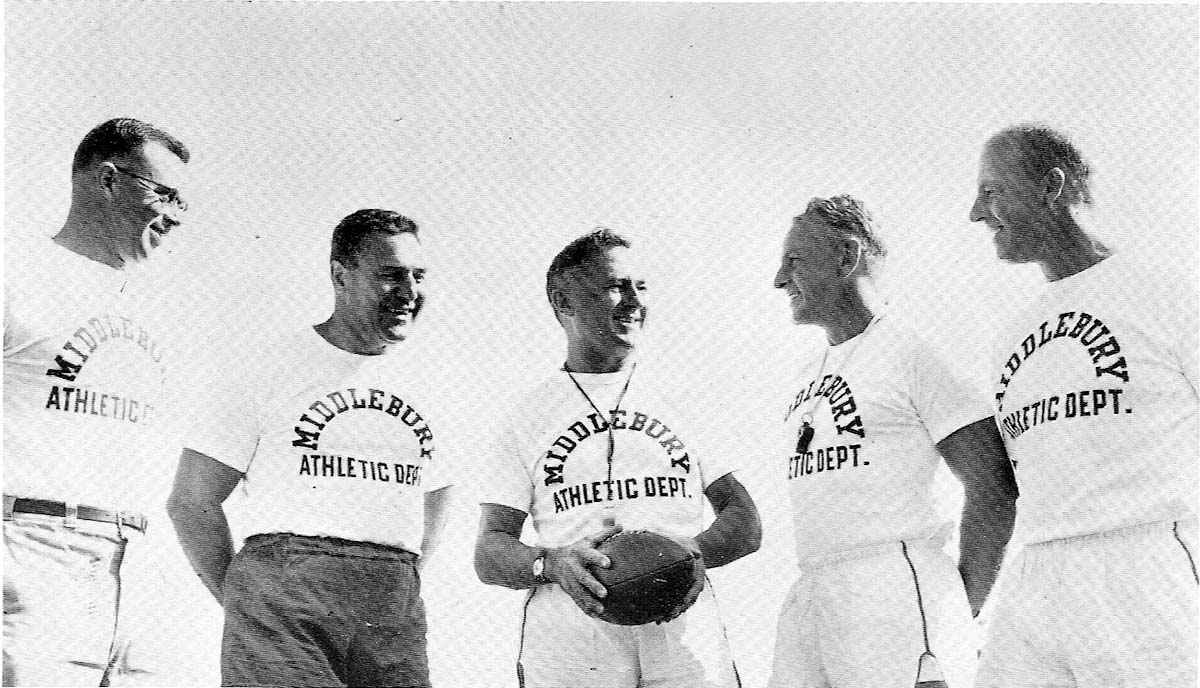 When I was a student at Middlebury in the mid-1960s, I was lucky enough to know Sam Guarnaccia, though not well: I was not a student of his in Spanish (he taught Spanish for nearly 30 years, was Dean of the Spanish School for 22 years, and began the Middlebury school in Madrid in 1951), nor was I a football player (Sam was a football coach at Middlebury for 25 years).

I actually think he knew me before I knew him. It seemed Sam knew everybody. He was a visible presence on campus: a robust man physically, warm and expressive. He loved teaching, he loved coaching football, and above all, he loved working with students. 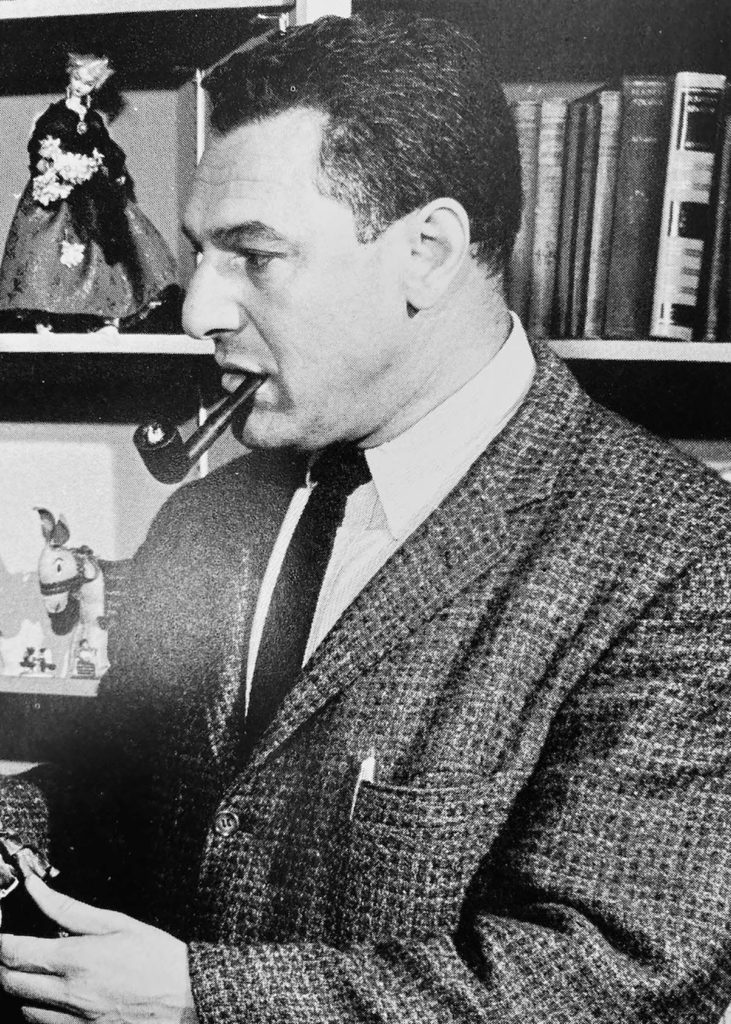 That’s all well and good, but it’s not why he was inducted into the Middlebury College Athletic Hall of Fame on Nov. 5.

He was selected because he was such a remarkable athlete himself in his years as an undergraduate at Middlebury in the class of 1930. Sam was brilliant in football and track and field, “the best all round athlete in the school,” according to athletic director and track coach Arthur M. Brown.

In football, Sam played in the backfield on both offense and defense. In the lively parlance of the day, here’s how the Campus (student newspaper) described his play against Williams in his senior year:

“Indomitable Captain ‘Sammy” Guarnaccia was everywhere, tackling this man, blocking that man, and in between tackles and blocks, scampering around ends or snaring passes. When he tore off 45 yards through the Williams team in the second period, the crowd of 2,500 went wild, and when he again circled the Williams flank for 20 yards more, the enthusiasm of the local cheering section knew no bounds.”

Football was a very big deal with thousands of spectators at Saturday games on big football weekends. Had statistics on individual play been maintained, no doubt that Sam’s rushing and total yardage stats would have been spectacular. In his junior and senior seasons, 1928 and 1929, Sam scored nine of the team’s total of 11 touchdowns.

In ’29, he scored all three Panther TDs against the University of Vermont, Middlebury’s greatest rival, in a 19-0 win for the Panthers. The Campus again:

Plunging, slithering and smashing through the line, or sliding around the ends, Sammy playing in his last game for Middlebury ended his football career in a blaze of glory. His interception of a Vermont pass and 85-yard dash for a touchdown in the second period was the feature of the game. The enthusiastic Middlebury rooters carried him off the field on their shoulders after the game. It is a fitting close to the football career of Captain Guarnaccia that he should lead his scrappy band of warriors to the State Championship.

Track and Field was hardly a minor sport in the ’20s and ’30s. Sam’s main events were the shot put and discus throw (though he also scored points in the broad jump): In 1929 and 1930, he took nine firsts and three seconds in his two main events, never finished lower than second in any dual or the State Meet. He held the school and track records in the shot and discus upon his graduation. 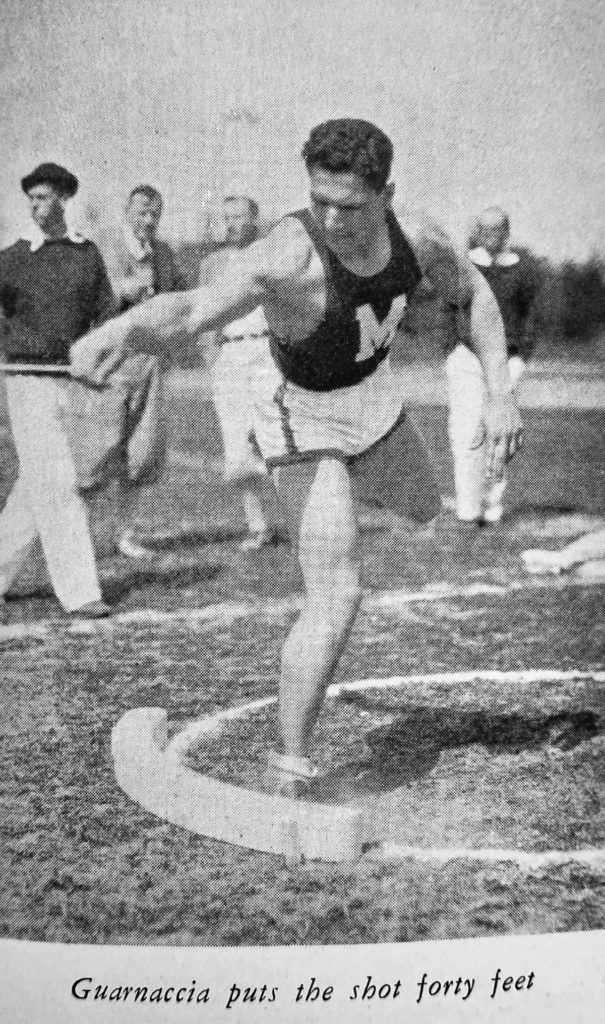 SAM GUARNACCIA, MIDDLEBURY class of 1930, was called by some the best all-round athlete in the college. Captain of the football team, he also competed in track and field, holding school and track records in the shot put and discus throw.
Photo courtesy of Middlebury College Archives

Sam Guarnaccia was a man of far-ranging skills and interests, united always by a love for Middlebury and its students. In addition to his teaching Spanish and coaching football, he served as Acting Dean of Admissions for a year, Acting Director of Alumni Affairs, Assistant Dean of Students for two years (1974-76) after his retirement from teaching; and in a sabbatical year, he was the first Director of the Peace Corps in Honduras.

Gary Margolis ’67 of Cornwall played for Sam when he coached the freshman team: “What good fortune to have been coached by Sam Guarnaccia my first year at Middlebury: Señor Coach, whose smile and handshake could last a lifetime and has.”

Jim Shattuck, ’64, wrote recently about Sam: “As a football-inclined freshman from South Texas entering Middlebury in the late ’50s, I had an early chance to experience the balance between on-the-field coaching and academic standards. Sam Guarnaccia was my line coach . . . and Spanish instructor on Tuesdays, Thursdays, and Saturdays (at 8:00 am!).

“Sam was the consummate teacher and role model. Above all, he was a man who consistently performed at the highest standard of fairness, integrity, competitive spirit.”

There are those in Middlebury no doubt who remember Sam and his wife Jean, who met in the Spanish School in 1940 and were married for 61 years until Sam’s death in 2001. They raised their two children, Gina and Sam Jr., “in the red house across from the covered bridge in Weybridge that they bought for $500!” as Sam Jr. related in a conversation this week.

Gina (Camalich) lives here in Middlebury and Sam, an accomplished composer and classical guitarist (www.samguarnaccia.com), lives now in Maine in a lakeside home on land that has been in the family for years.

Sam Sr. was born in Wakefield, Mass., in 1908 into an immigrant family from Sicily who arrived in the States in 1904, the second to last child of 10. His father was a cobbler who worked in a shoe factory. Sam himself worked in a “meat-packing factory as a teenager where he became very strong,” according to Sam Jr.

In accepting the Hall of Fame honor for his dad, Sam affirmed his father’s generous and expansive nature: “He was supremely real, without guile. He was more interested in the person next to him, or in his work, or in a walk down the road, or in you, or in me, than himself. He was strong yet tender, demanding but tolerant, uncertain at times but full of conviction.

“He had a powerful body and the soul of a poet.”

Karl Lindholm Ph.D., the emeritus dean of advising/assistant professor of American Studies at Middlebury College, can be reached at lindholm@middlebury.edu.